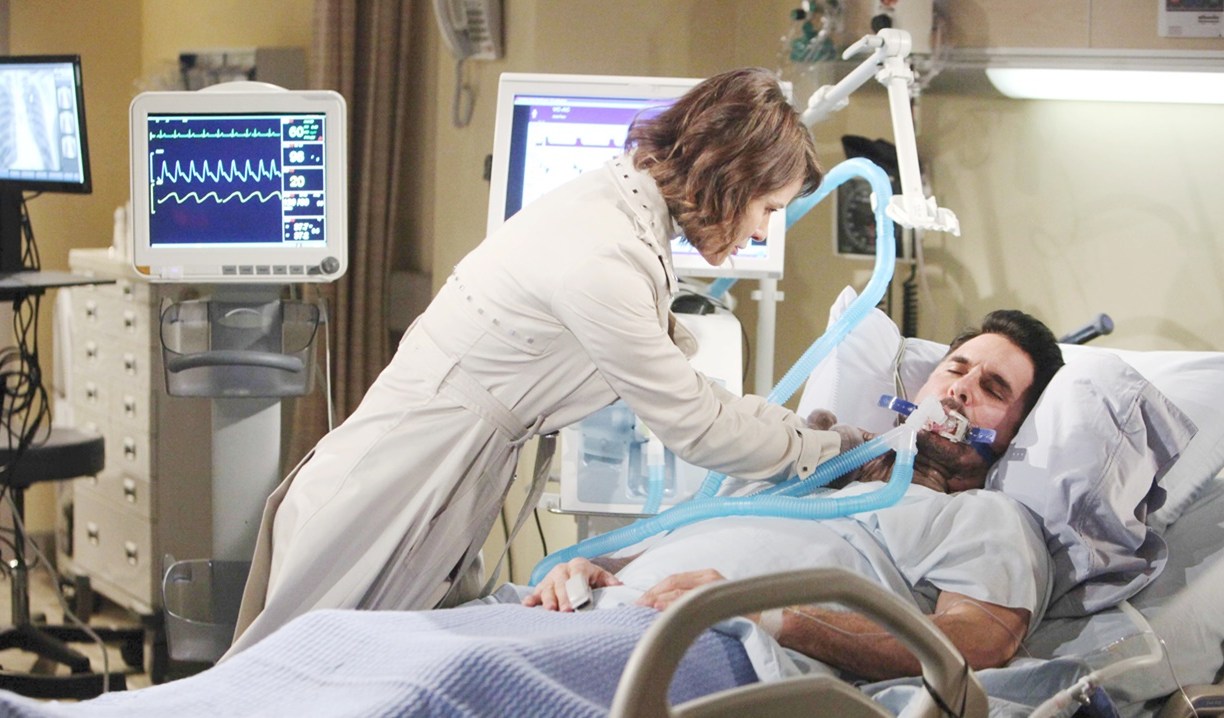 It’s a short week for the CBS soaps as B&B is pre-empted for NCAA March Madness, and the handful of episodes we got centered on Bill’s shooting, with a dash of Thomas and Sally thrown in. Thoughts:

Criminal minds.
In the last Deconstructing B&B, the suspect list in Bill’s shooting took shape, and Detective Sanchez and Lt. Baker didn’t make much progress as they rather nonchalantly gave several people a going over, but nothing much came of any of their interviews. The suspects themselves revealed more than the police, simply by pointing fingers, making cryptic remarks, flinging accusations, or straight up asking each other if they shot Bill. Soaps.com readers polled felt Sheila was the most likely to have pulled the trigger, followed by Justin, and ‘someone from the Spectra gang’ a distant third. I like Saul as the shooter – sadly, this is based on the likelihood the headwriter will choose a dispensable character. As far as reactions to Bill’s life or death situation go, Liam’s was probably the most touching, though it verged on too soft. The award for most intense reaction, other than Katie’s hysterics, definitely goes to Caroline, who appeared ready to finish off her uncle for destroying her life in a stunning cliffhanger moment. Fans reacted:

So Caroline blames Bill for ruining her life?? IS she for real right now? She didn't have to go along with it. #Caroliar #BoldandBeautifful

Somebody come in and catch Caroline please. I don't want $Bill to die. He's the bad guy we ❤ to hate #BoldandBeautiful

Caroline being angry enough at Bill to kill him when she chose to keep up his lie doesn't seem believable. Who turns to murder because a guy doesn't want to be with you?#BoldandBeautiful #WhoShotBill

Reunited.
Presuming Caroline doesn’t disconnect Bill’s life support and go on the lam, we’ll likely be seeing some interaction with her, Thomas and Sally, which should be worth tuning in for as Caroline’s spinning, Sally’s no wilting flower, and Thomas is royally ticked off. My favorite part of this week’s episodes was seeing Thomas and Sally notch right back into their groove and pick up where they left off. She might have been hurt, and turned her affections toward Liam, but clearly it was always Thomas for her, and vice-versa. Swoon.

We all know when it comes to Thomas, Sally can't resist him. She loves her BUCKO

These are my thoughts on this week of B&B, please share yours using the comment section below.