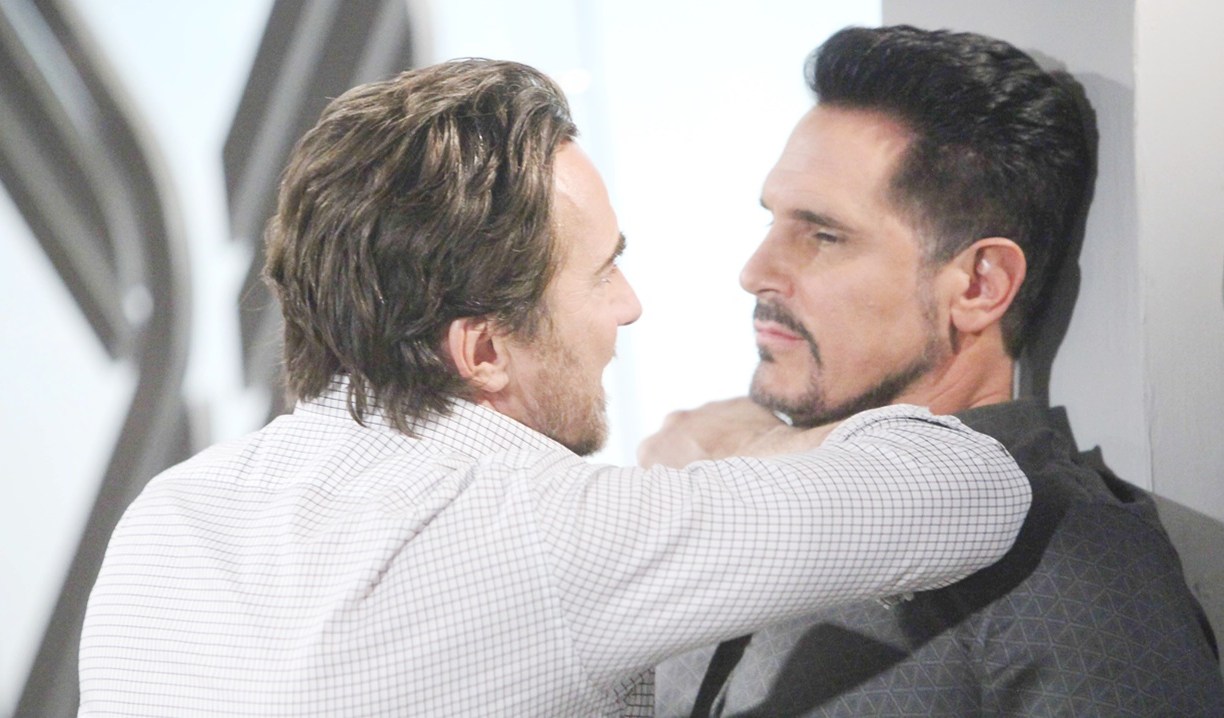 So many of the characters on “B&B” have committed so many similar transgressions that it’s really not feasible for anyone to be calling anyone else out on their behavior…ever. Therefore, the likes of Brooke and Ridge, or anyone else except Hope, who we were reminded this week is basically perfect, going after another character for their lack of judgement and morals, definitely results in the need to exercise a certain amount of selective amnesia – on their part and ours. Thoughts:

Judgement call.
Ridge’s reaction to Steffy’s admission that she’d had sex with Bill was soapy goodness, but that doesn’t mean it wasn’t hypocritical as all get out. As many pointed out, Ridge has no room to judge considering he very nearly had sex with his father’s wife in the recent past, and prior to that was involved in a paternity scandal involving his own son and Bill’s niece.

Wait a minute! Ridge is going to kick Bill's ass for doing exactly what HE tried his hardest to do with HIS FATHER'S wife? Does anyone self evaluate on this show? #BoldandBeautiful

The narrative that Bill must have taken advantage of Steffy became irritating too, but that said, a father is going to do what a father must do, and there’s no denying it was fun to see Ridge go storming in to confront Bill.

History lesson.
In the last Deconstructing B&B, we questioned Brooke asking Steffy to be her Maid of Honor and things only got more absurd this week when Ridge decided Brooke would be the ideal person for Steffy to turn to in her time of need. Yeesh. Aside from the fact that Brooke has a similar past involving father/sons/brothers, which went unacknowledged, there is no basis in their history for these two suddenly becoming confidantes. At least when Brooke went to confront Bill, she alluded to the fact that she had done the same thing as him, not that it stopped her from being utterly outraged by his behavior.

Never ever.
If you took a drink every time someone said Liam should forgive his wife, you’d have spent the week sloshed. The head writer comes up with these mantras and has characters repeat them to the point we all want to scream at them to shut up. In any case, Liam has had a parade of people through his hotel room preaching forgiveness, which felt a little premature. The guy just found out his wife had sex with his father…give him a minute! Hope was one of those visitors, and Liam’s uncharacteristic inability to forgive really piqued her interest about what had gone down. Ridge kept mum when Hope asked him, but Brooke spilled the beans, and as I suspected, Hope’s tune changed immediately. As for Liam telling Steffy he could never forgive her, all I could think was, “Never say never!” Because after proclaiming such a thing, if he did work up to forgiving her it would be a very big deal, and very dramatic…and we know that is one thing “B&B” does extremely well.