Deconstructing B&B: Ridge Is Rocked by Steffy’s Truth About Bill 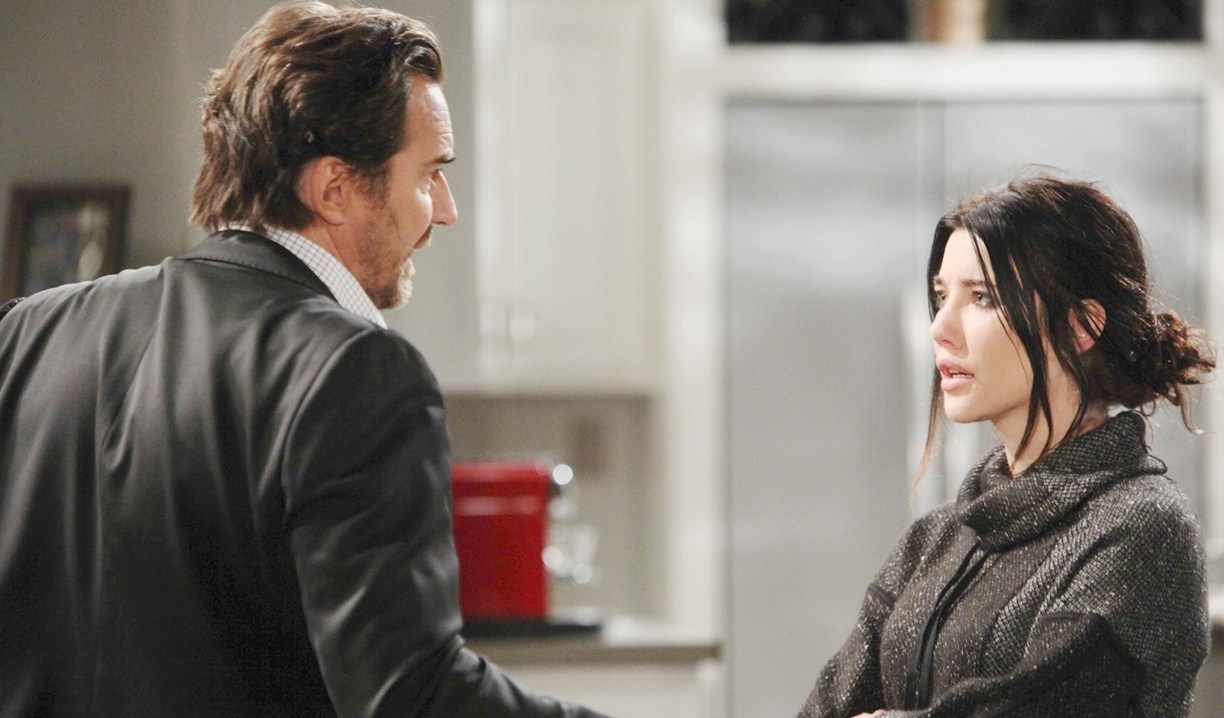 This week featured another announcement courtesy of Ridge and Brooke, a revolving door of visitors at Steffy’s place, concluding with the dramatic scenes with her father learning the truth, and the early warning signs of a developing rivalry between Hope and Sally. Thoughts:

Stage set.
In the last Deconstructing B&B, we were wary of Hope returning to become entrenched in a triangle and her conversation with Sally this week seemed to set the stage for the women to compete for Liam, as Hope realized the redhead was harboring feelings for him and reacted by vowing that she would be there for her ex if he needed support. I wish this had triggered a feeling of excited anticipation, but it didn’t. Sally’s potential to be an intriguing character was doused in favor of making her into another pod female chasing after her man, and Hope, though it’s early days, still seems bland. Liam, meanwhile, shouldn’t even be in a headspace to entertain the idea of another romance, but he’ll likely be engaged by February Sweeps.

No change in the game.
Ridge held yet another gathering at which he and Brooke shared their plan to get married and bring the family back together (insert eye roll) and deliberately left out Thorne, who was later trotted out to repeat his new-but-feels-old mantra of being the better man for Brooke. Thorne was also involved in a meeting with Rick and Eric, in which he and his brother were able to persuade their father of exactly nothing where Ridge or the business were concerned. So far, Thorne’s return hasn’t been the dramatic game-changer we were teased with, so here’s hoping things will pick up on that front.

Shut down.
Carter brought up his feelings to Maya again, and as with last week, it just felt as random as all get out. Presumably they’re angling for a triangle down the road, but it just seems bizarre when there’s not even a crack in Maya’s marriage to Rick.

What the what?
In the latest instance of “B&B” switching out personalities and getting convenient historical amnesia to enable a plot, Steffy’s trademark strength went completely MIA, and Brooke announced she would ask Steffy to be her Maid of Honor. This left many fans irked as it was just so obviously plot-driven to put Brooke at Steffy’s door and in the middle of her drama, particularly as Hope had just returned and was the logical choice to stand up for her mother. Fans reacted:

It’s astounding to me that #BoldandBeautiful doesn’t get that Brooke & Steffy should be rivals, and at most civil to/tolerating each other. Neither should ever be asking the other to be part of their weddings…

Brooke asking Steffy to be her matron of honor is another WTF plot point, but hey, at least she didn't ask Katie. #BoldandBeautiful

In related commentary, Brooke sent Ridge over to see Steffy, and the moment when he reacted to the news she’d had sex with none other than Bill, the dramatic music, murderous look, and chilling tone of voice, was arguably the highlight of the week. Can’t wait to see him confront Bill!