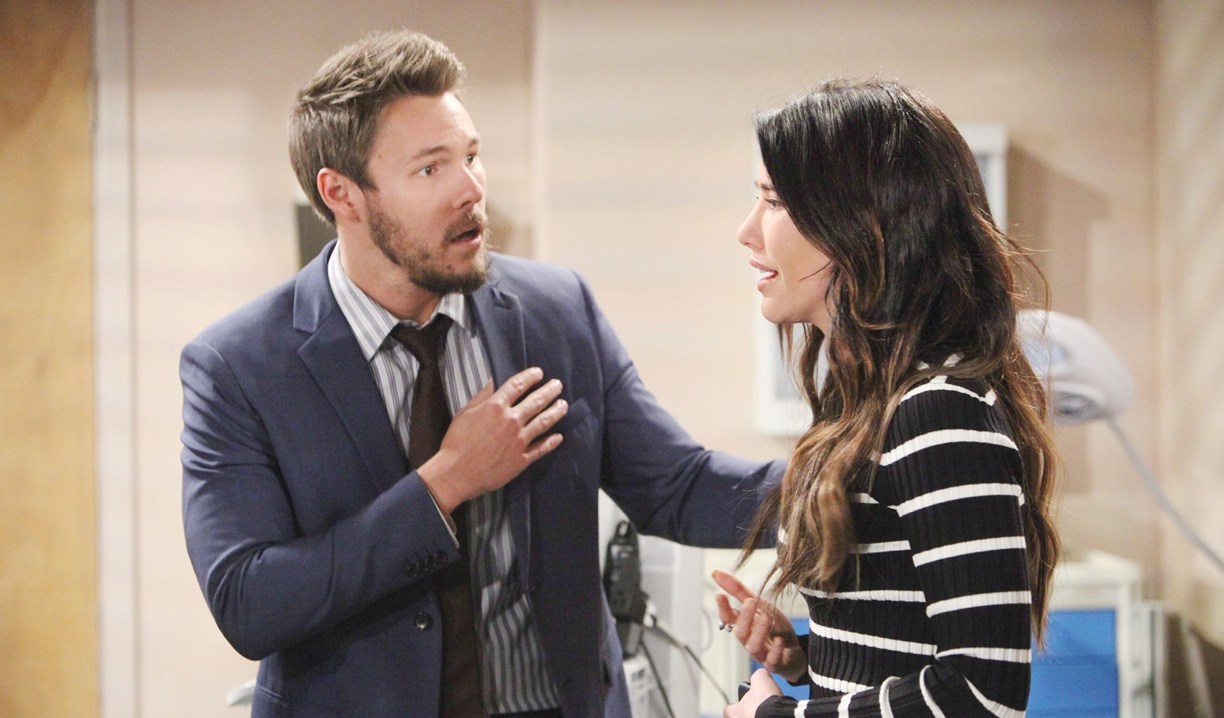 As mentioned in the last Deconstructing B&B, Brooke’s triangles feel tired and overall the show seemed boring and repetitive this week. Unfortunately, there’s just nothing that feels fresh, exciting, or different happening. Thoughts:

Who’s the daddy?
I actually like Liam and Steffy, but that doesn’t mean I wasn’t sick to death of them having the same conversation for weeks. Oh, and drink every time Liam mentions how loyal Bill is since he had sex with Steffy! Of course, the revelation that Steffy went to the guesthouse amounted to nothing, and just as Steffy was ready to move on from her guilt and was reconnecting with Liam, as viewers widely predicted, she turned up pregnant. I actually loved their initial reactions to the news, but obviously the baby could be Bill’s, so it’s pretty much a given that Liam and Steffy’s ‘happiness’ will be peppered with haunted looks and broody moments courtesy of Steffy and Bill, and perhaps more conversations about how Liam ‘can never know’. Calling something similar to this right now – Liam finds out the baby’s Bill’s just after Hope returns, turns to Hope for support, then finds out the baby is actually his after all (likely due to a medical emergency) just as he’s about to marry Hope, which stops the wedding and sends him back into Steffy’s orbit.

Popping the questions.
While we’re on the topic of predictable developments, Brooke was literally the only one surprised when Ridge proposed again. And the dumbass got Quinn of all people to design the ring. I hope Brooke finds out and smacks him. Viewers reacted to the marriage proposal:

Good grief. I love Brooke but why is #BoldandBeautiful so obsessed with proposals and marriages. It has zero impact any more.

She's not even divorced from Bill yet….?

She has enough wedding rings to open her own jewelry store. This has become sickening.

As for Thorne, he also threw his hat in the ring, professing his feelings for Brooke and saying she should marry him. Why would she suddenly agree to marry someone she hasn’t even been in contact with? Also, what happened to his relationship with Taylor? Drives me crazy. Anyway, Thorne and Ridge shoved each other – par for the course – and despite Thorne’s formidable new attitude, there’s still a lot of the old petulance and wheedling in his diatribes about Ridge. I’d much rather he had come back, seduced Brooke, and took Forrester Creations out from under Ridge, and totally blindsided him, letting his actions speak louder than, well, whining.