Deconstructing B&B: Sally and Liam’s Kiss Could End a Marriage 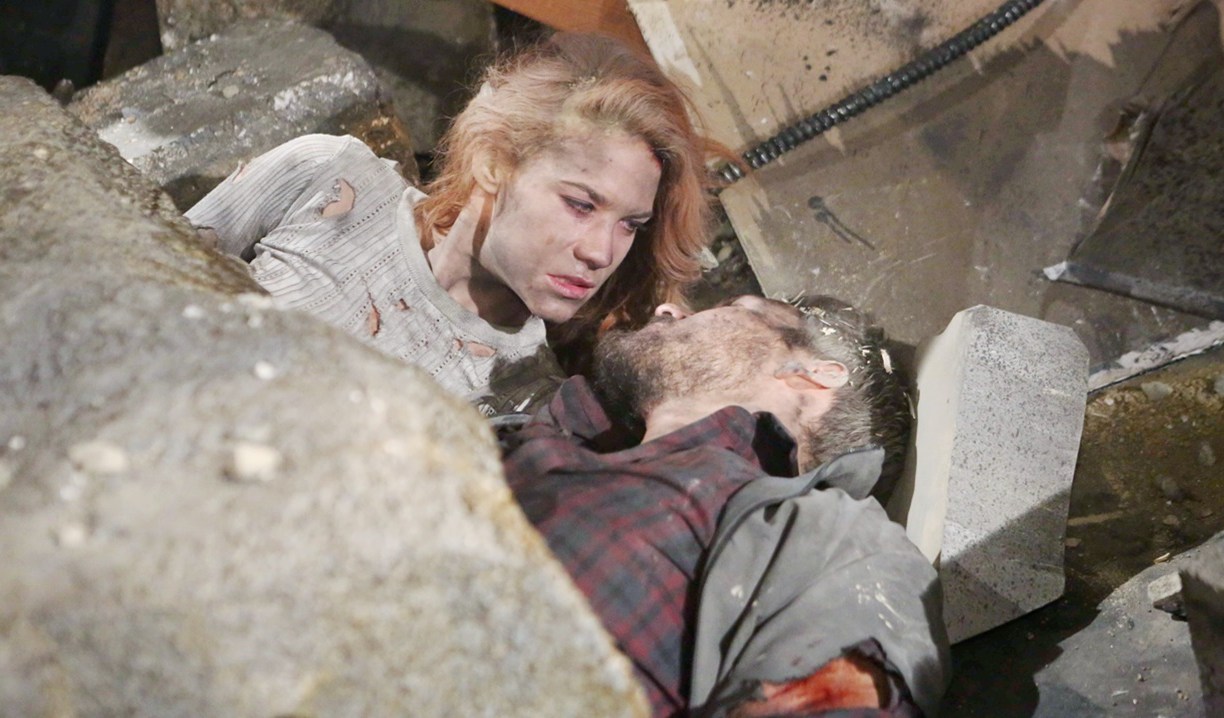 As mentioned in the last Deconstructing B&B, the explosive cliffhanger was dramatic, and in the aftermath, though the emotion of the individual characters has been conveyed very well, it remained difficult to feel ‘drawn in’ to where the pairings are going, as the developments have felt forced through plot curveballs that haven’t always made sense. For example, why would Bill risk his marriage, his reputation, his familial relationships, or his son’s life over a skyscraper? Thoughts:

In need of rescue.
As some were quick to point out, it was rather ludicrous that Bill and Steffy would be inside a building on the verge of collapse carrying out the rescue of Liam and Sally instead of the actual rescue workers, but given that this is a soap opera, it was to be expected. Sally and Liam kissing in the life or death situation was also par for the course. While I felt for Liam as he made the decision to come clean to Steffy about the kiss, it was disappointing not to feel more intensely about whether their marriage would survive, or conversely, be pulled toward wanting him to be with Sally. Sally’s dread and desperation to have Liam keep quiet was also palpable, as was Steffy’s despair at being betrayed, but it would have been amazing to have felt more torn or invested with regard to the pairings. Perhaps we’ve seen this similar scenario played out too many times on the show. Fans weighed in on Liam’s confession:

I don't know why he even said anything to her. Just to heal your own conscious, I mean go meditate or something. #BoldandBeautiful

So Glad Liam told Steffy! Now She most likely is going to run to
Bill! ? #BoldandBeautiful

More: B&B’s Ashley Jones in You Killed My Mother

Your agenda is showing.
Similarly, Brooke’s attitude toward Bill didn’t make much sense, which killed the emotion in that split. It just seems way too obvious from the dialogue that Bell’s desire to write a Bill/Steffy hook up is behind it – I mean, why was Brooke suddenly scandalized by Bill being Bill? I’d have preferred to ‘feel’ the anguish of Bill and Brooke’s break-up because it occurred for a realistic reason, which would make whatever happens next, Steffy and Bill getting together or whatever else, seem like a more natural development.

They’ve got a secret.
Katie and Wyatt continued to keep their relationship hidden, but it seems only to be a matter of time before it’s out. In fact, it’s strange that Quinn hasn’t spilled the beans, as Wyatt’s ‘warning’ isn’t bound to keep her quiet for long. Here’s hoping the reactions are realistic, as this could be a lot of fun.