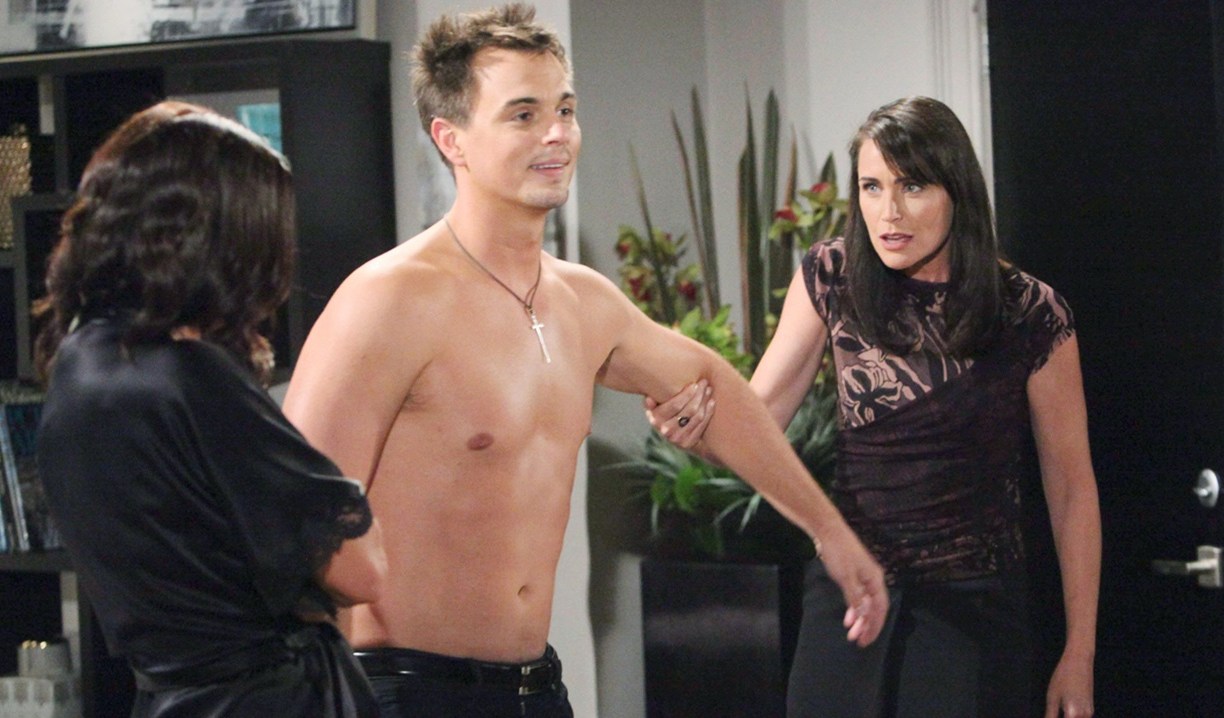 Well, the beginning of the week was a hoot with Quinn reacting to finding Katie and Wyatt in bed together and then being confronted by an angry Eric. This was the Quinn many have wanted to see clashing with Sheila! As for the Bill/Liam/Steffy stuff, it just droned on with the same repetitive lines until Bill finally took some action. Thoughts:

No chill.
Seeing Quinn go absolutely ballistic in Katie’s bedroom was great fun for those who have missed the, erm, spirit, of the ‘old’ Quinn. Of course, it all seemed a bit much, but still we couldn’t help but love it. That said, Wyatt’s reaction left a little to be desired as he really didn’t come at his mother strongly enough considering the way she physically accosted Katie in her own home (which she marched right into through the unlocked door uninvited, just like Bill and Eric)…over her adult son. Fans took note:

Why in the heck did Wyatt just sit there and let Katie get man-handled by Quinn? #BoldandBeautiful

Oh damn Katie is afraid of Quinn. Wyatt you better reign in your mother or Katie might bounce like Steffy. Yikes. #BoldandBeautiful

Thankfully, Wyatt later apologized to Katie for his inadequate response. We should hope so. Eric, for his part, was not shy about expressing his significant outrage to his wife, which made for another dramatic scene, and led to a more vulnerable Quinn accepting comfort from Mateo. Sheila was pleased to hear of the argument, but ironically, it may lead to the downfall of her plan if Mateo develops a soft spot for Quinn. Later, Katie and Wyatt, amusingly, discussed his family’s issues as though he wasn’t currently having sex with his father’s ex-wife:

How can Wyatt call his family dysfunctional without throwing himself in the mix when he’s Mr. Sloppy Seconds? #BoldandBeautiful

Still, many love the Wyatt and Katie connection, and it will definitely be interesting to see how this plays out moving forward, especially with Wyatt having ‘foreshadowed’ about how Bill will react.

Bill takes action.
In the last Deconstructing B&B, Bill repetitively vowing revenge was feeling tiresome, and this week he kept pacing a hole in his living room rug while continuing to voice ominous threats to all who dared enter. Steffy went on playing peacemaker, and Justin worked both sides of the Liam/Bill feud. Notably, he threw Liam for a bit of a loop by pointing out that he was behaving more and more like his father by the day. Nice one. Justin also hired Ken the computer tech (played by Danny Woodburn) to hack into Liam’s system to find the incriminating recording at the heart of the blackmail. The showdown in the office when Bill appeared with Justin to take back what belonged to him was pretty riveting…loved the surprise request for forgiveness and hug, and giggled at Wyatt hanging out with Katie saying ‘Hell no’ to going over and getting in the middle of it.