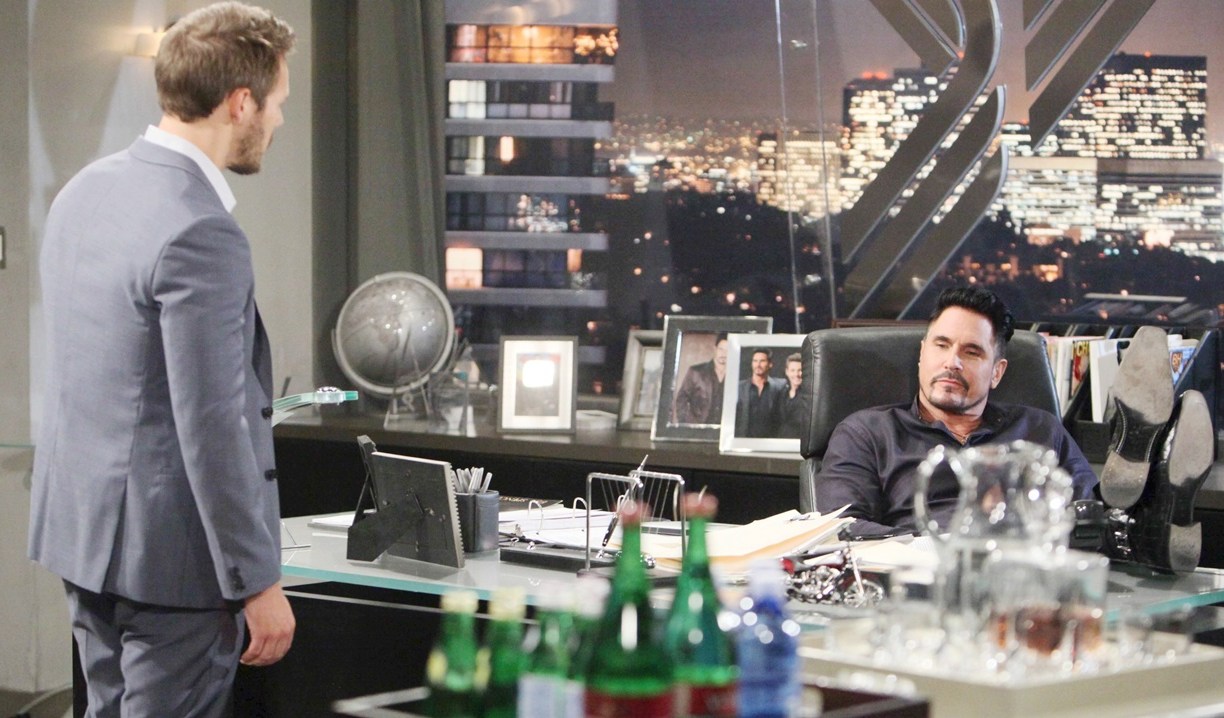 The intense drama that’s developed between Liam and Bill is kind of delicious. It’s interesting that Bill sees Liam as being nothing like him, yet fails to notice that he is exactly like him in the way he stands up to him and refuses to be intimidated. The speculation about how others (such as Brooke!) will react if Liam exposes Bill is also fun. In any case, the week’s events overall had viewers engaged and waiting to see what a few characters’ next moves would be. Thoughts:

Fired up.
As mentioned in the last Deconstructing B&B, Sally watched her dreams go up in flames, which created a lot of sympathy among the other characters when word got out. Liam quickly deduced that Bill was behind the timely blaze and confronted his father, which resulted in another sinister warning. Somewhat undeterred, Liam shared what he knew with Steffy, though they’ve kept it secret thus far. As the electrical socket sparked into flame just after Sally and the gang left the building, I think there’s room for speculation that although Bill believes he’s responsible for the fire, and the storyline will move forward on that premise, down the road it could be revealed that the fire in fact began on its own. In any case, the personal ‘good versus evil’ drama between Bill and Liam, and the moral dilemma faced by Steffy and anyone else who finds out, is compelling, and had fans weighing in on what should happen next:

$Bill needs to be called out. Cmon Liam do the right thing and expose him!#BoldandtheBeautiful

Unless Liam plans to put his father in jail, he & Steffy need to take it to the grave. #BoldandBeautiful

Smokescreens.
Sally, who ran into the office before being forced out of the burning building, wound up in the hospital with smoke inhalation, and though there were many concerned visitors, the moment Thomas walked in everyone else faded into the background. While I was kind of ‘meh’ on Thomas’ new look, the way he looked at Sally (and she at him) couldn’t help but make me smile – great chemistry. Since Thomas is invested in not just Sally, but the company, it will be interesting to see how he responds to her making herself vulnerable and expressing her expectation that he be there in her time of need. Meanwhile, Caroline was over at Bill’s office, ranting for the umpteenth time about the need to tell Thomas the truth, and though we love her, it’s getting a little old, especially since going along with the lie at all compromised the character’s integrity.

I can't believe she would do this knowing her aunt died with cancer. It's disgusting #boldandbeautiful

Sheila-free living?
Over at the Forrester mansion, Eric seemed to come to his senses (for now) as he threw Sheila out. However, he continued to lecture Quinn for having violent tendencies, which opened the door for Ridge to re-enter the fray. Eek. With Sheila on the outside and gagging to get back in, and Ridge back in the mix as Quinn’s champion, things are certain to get interesting!

Friday notes.
Ugh, Thomas and Sally’s goodbye was killing me…melodramatic soppy soap goodness… Caroline showed some impressive outrage toward Bill and even – gasp – raised her hand to ‘Sky’, however she had the perfect opportunity to come clean to Thomas when he said Sally really needed him, and still elected to keep quiet. Yike… Liam continued to struggle with his knowledge of Bill’s crime, with Steffy acting as Devil’s Advocate by pointing out what he stands to lose. Meanwhile, Brooke was standing by her man’s ruthless approach to business, but would she condone torching out a rival? Lying about someone dying? Bill’s going to have to lose something or atone somehow for his behavior – the ol’ soap karma – and something tells me it could be Sky or Brooke…or both. Or maybe Liam will make him finance Sally’s come back. Hehe.