Bold & Beautiful’s Big Twist Can’t Get Here Soon Enough — Plus, What’s With Everyone Being So Unlikeable? 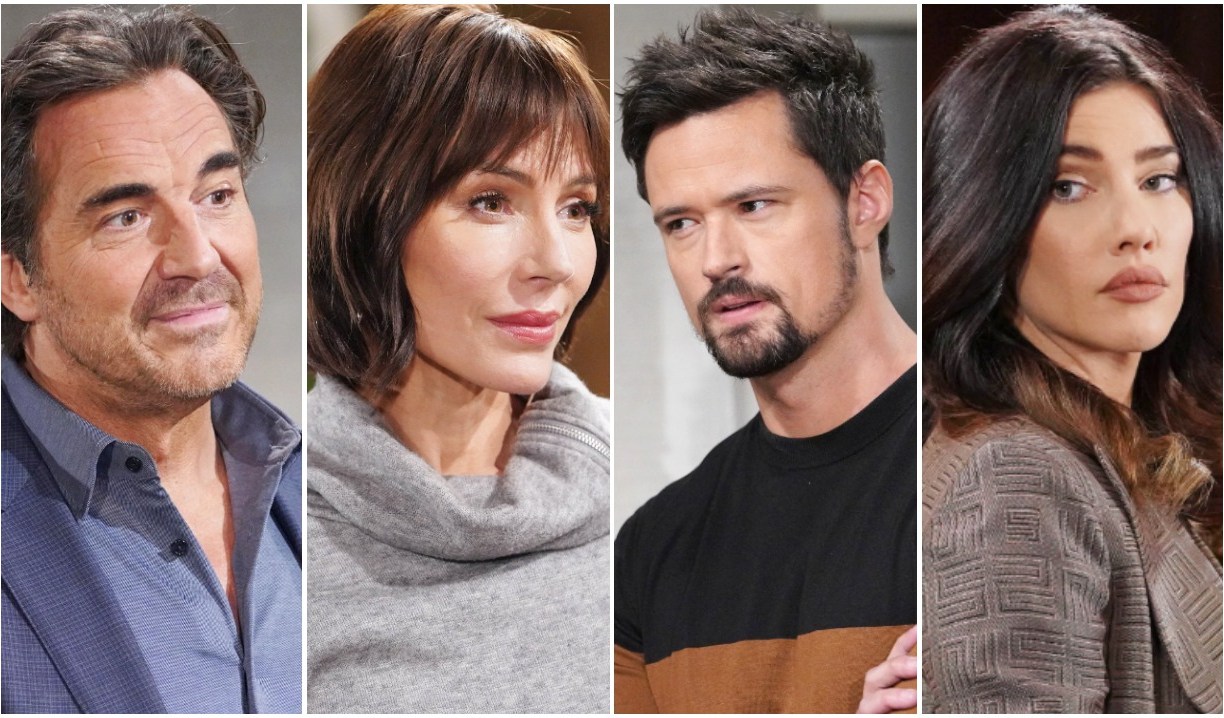 They say there are a million stories in the naked city, but there was only one in Los Angeles this week, at least until Friday rolled around. The last day of the week gave us a break from the Brooke/Ridge/Taylor story, which had a couple of dramatic highs and some cringe-worthy lows. But that “relief” came in the form of Paris and Carter, a pairing whose story is not exactly grabbing viewers…

Look, it’s not like this is the first time that Ridge has swapped Brooke for Taylor or vice versa. Heck, he wrote The Waffler’s Handbook which taught Liam everything he knows. But even for Ridge, this trade-off was incredibly quick. I got whiplash as he went from forgiving Brooke to making out with Taylor. Do not pass “Go,” do not collect $200. 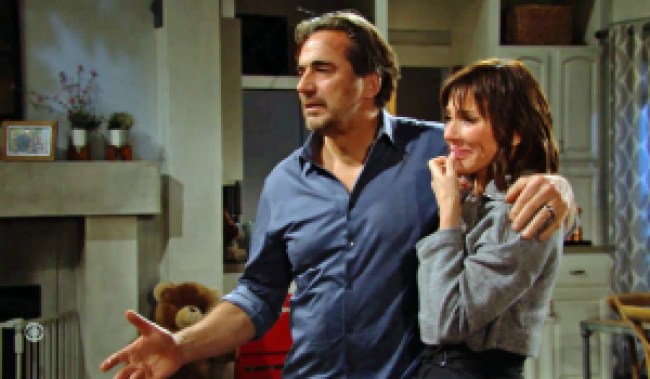 Above: “Wait, you kids really want to see us make out again? That seems a little bit creepy, but if you insist… what the heck!”

While this kind of behavior has become standard practice on Bold & Beautiful, I don’t think I’ve ever seen quite so many characters ruined in the process. Ridge looks like a jerk, Taylor came off as pathetic, their children behaved like obnoxious brats. What’s kind of amazing is that even Brooke-haters — of whom there are many — had to maybe feel a little bit sorry for her in this scenario.

Think about it… Brooke kissed Deacon. Was it ill-advised, even while drunk? Of course it was. As was keeping it from her husband for so long. But there’s a big difference between Brooke sharing a kiss with Deacon — which she immediately and for weeks thereafter regretted — and Ridge running to Taylor and declaring “I want to come home” without even speaking to his wife first.

It makes sense to me that whenever Sheila goes barging into Tay-Tay’s office, it’s empty. I mean, who would seek psychiatric help from this woman? Certainly not anyone who knows that she apparently spent all those years when she was off canvas pining for Ridge. I mean, doctor, heal thyself! 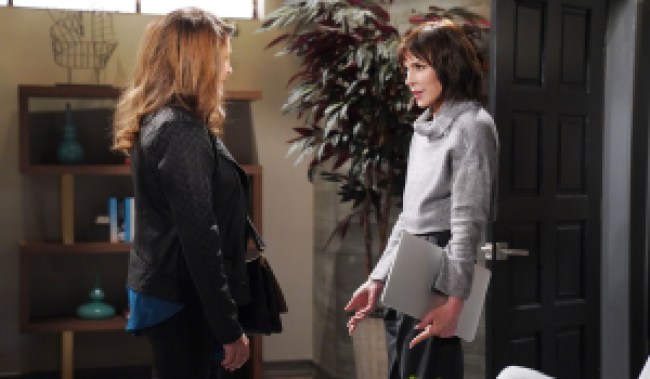 Above: “Sheila, don’t take this the wrong way, but I feel as if I need to expand my social circle beyond… well, you.”

Now to be clear, this is not about Krista Allen. That woman lights up every single scene she’s in and is one of the best recasts this or any other soap has had in years. Also, if you’re not following her on Twitter (@KristaAllenXO), you really should, because her feed is a blast and she genuinely adores interacting with the fans. “We get to have fun together,” she told me during a recent chat. “And I learn so much from them! They know Taylor better than me!”

And what many of those Taylor fans know — even, I’m going to guess, those who have waited years for a “Tridge” reunion — is that she deserves better than this. At the very least, she needs to say to Ridge, “Nope, you don’t get to just move back in and reclaim the family you’ve repeatedly abandoned. You need to prove to us that we should trust you. You need to earn us.”

I mean, if Taylor hadn’t been available, would he have simply moved down the list and shown up on Shauna’s doorstep (again)?

And don’t get me started on how Steffy and Thomas have been behaving. Whoops, too late. It’s one thing for children to want to see their parents unite. But who in their right mind would say, “You know, our dad has reunited with our mom numerous times, and sure, it’s always been a complete disaster, but I guess that’s the best we can hope for! Sure, our mom is smart and gorgeous and accomplished, but she’ll never be any man’s first choice.” 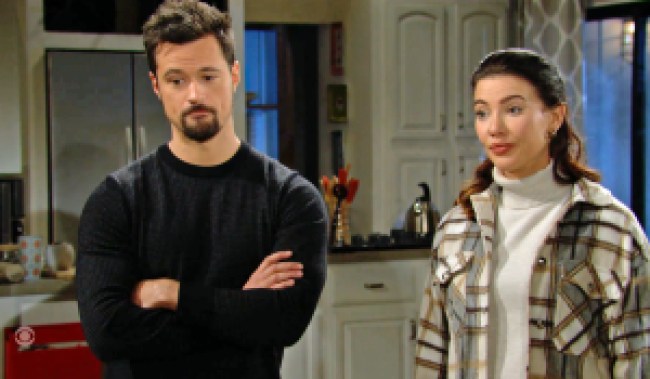 Above: Having ignored multiple warnings about the consequences of making faces, Thomas and Steffy found themselves permanently stuck with these expressions.

And then there’s the awful way they treated Hope! Thomas has clearly gotten over that whole crush/obsession/love thing, cause he had no problem watching Steffy talk to their half sister in the snidest, most dismissive way possible. Here’s a thought: If reuniting y’all’s family is so important, why haven’t you made one move toward getting Douglas back with his dad, full-time?

When Steffy was literally mocking Brooke with Thomas, saying she was no doubt weeping and begging Ridge to change his mind, it was as if she had completely forgotten when she was the one shedding tears over Liam.

Steffy to Liam : please don’t do this I’m begging you don’t #BoldandBeautiful pic.twitter.com/KsHUrqNQdh

That is, of course, one of the biggest problems with this show: Characters neither remember nor refer to their own pasts. It’s why charges of hypocrisy are so regularly leveled against them. Fans remember these moments, why can’t the characters? Imagine how much more connected viewers would feel if Steffy and Thomas had shown empathy instead of being borderline cruel?

Over the past few weeks, the most fun thing about Bold and Beautiful has been trying to figure out what they’ve got coming up that, as has been repeatedly teased, will change everything. As I speculated recently, I’m still convinced it’s that they are going to be killing off Ridge. But there have been numerous other theories, including something a fan speculated last week that is so outrageous and exciting that… well, we thought it deserved its own story, which we’ll be running later this week. Above: “I know you know what the twist is, Liam! I can’t believe you won’t tell me, your own father! Wait, is that it… I’m not your dad?”

More: Zoe, are you ready to come home?

Despite the speculation, theories and guesses, nobody knows exactly what’s coming… but man, am I ready for it. I’ve been watching Bold & Beautiful from the beginning… it’s the only currently-airing soap I can say that about. Over those years, it’s had times when I have been absolutely gaga over it, and it’s had times — like the period we’re in now — where watching is a struggle.

But it’s always been “my” soap in a way some others weren’t. (One Life to Live, for example, wasn’t one of “my” shows. It had stories I liked — I might be the only living fan of Eterna — and ones I didn’t, but it never really felt like “my” show.) And as every soap fans knows, when we have that personal connection to a show, when it’s a ride-or-die for us, we want it to be the best it can possibly be.

So I’m excited to see what this big twist is and how it will, as we’ve been promised, change the show forever. Bring. It. On!

• We ended the week with Carter trying (and failing) to resist Paris. This is another case of grown adults acting like children. All Carter has to do is say, “Listen, talk to your mom. She’s the reason I’m pulling away from you.” And all Paris has to do is say, “Mom, this is none of your business. Butt out.” Grace’s threats carry no weight, because Paris has told Zende she doesn’t want to commit to him. Are we supposed to think Eric and Ridge would want to force Paris into a relationship with Zende? 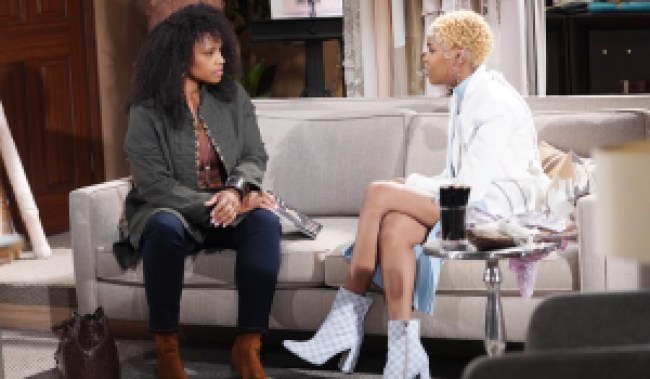 Above: “But mom, Zende lives with his grandfather! I mean, how uncool is that?”

• I nearly choked on my lunch — which I always eat while watching — when Sheila said, “Everyone eventually gets what they deserve.” I was like, “Deacon, you best back away because lightning could strike her at any moment.”

• Why is Ridge moving into Steffy’s guest house? The dude is rich. Buy a house. Heck, did Thomas ever find a place? Maybe you two can split the mortgage.

• I was happy to see Eric this week, although it really served to remind me that there’s a major element missing in this unfolding Brooke/Ridge drama. Shouldn’t we see Quinn reacting? She’d be overjoyed by this turn of events, given how much she hates Brooke. Then again, far as I can tell, nobody’s even warned Quinn that Deacon — the guy who shot at her — is back in town.

That’s it for me this week. Share your thoughts in the comment section, then check out the gallery below in which we list daytime’s wealthiest families. And of course, what fun would that be if we didn’t rank them so that you could see exactly where the Forrester clan falls? 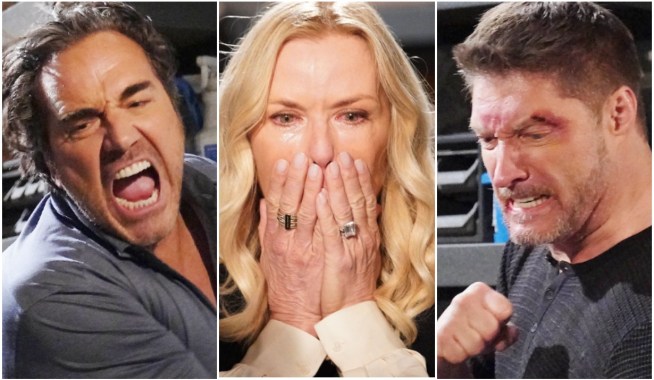 Bold & Beautiful Finally Got Down and Dirty Even as It Set up a Major Twist — Plus, Why What Just Happened Makes Absolutely *No* Sense

Bold & Beautiful Was Hit With a Devastating Case of Selective Memory, a Surprising ‘Hero’/‘Villain’ Switcheroo and a Massive Reveal That Changed… Wait, Nothing? Seriously? 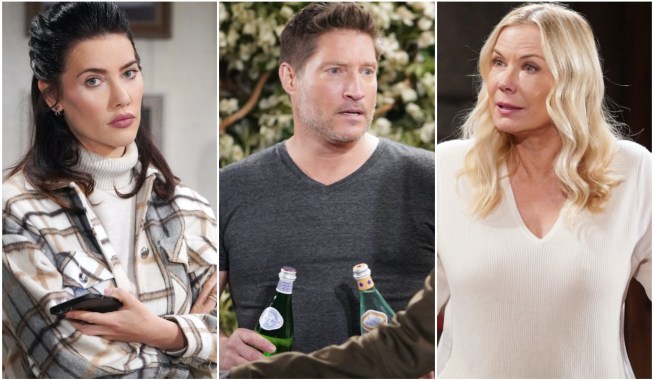