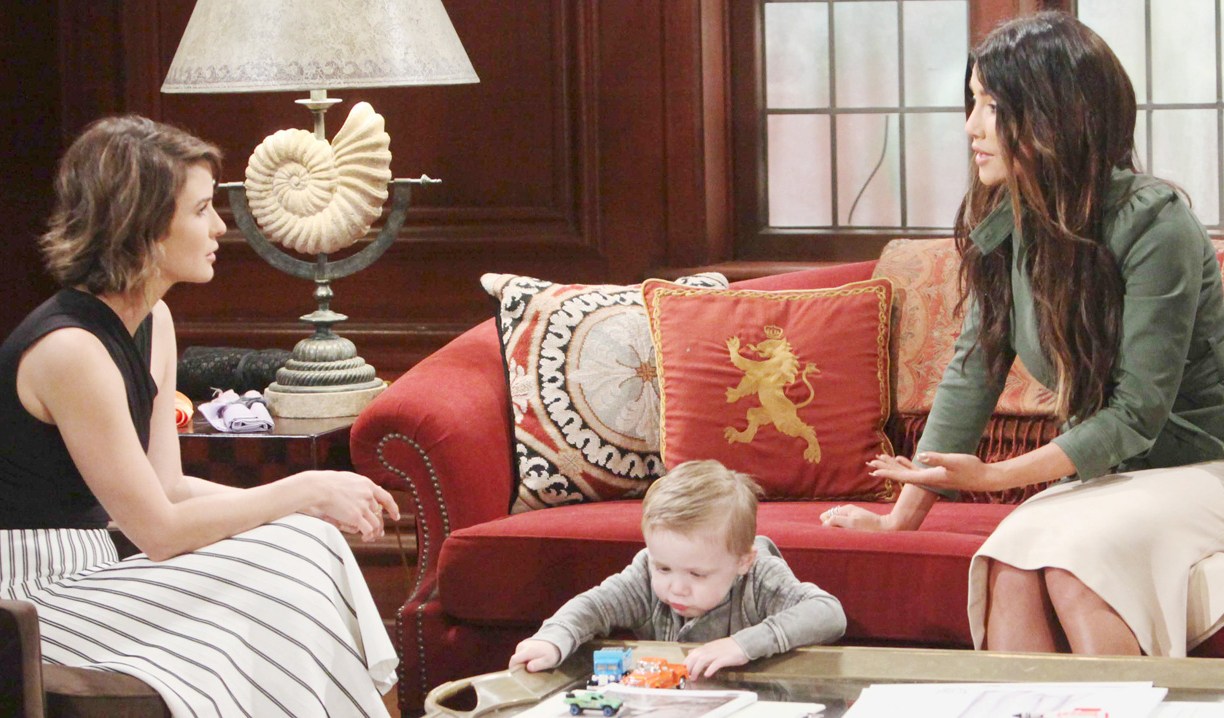 We continued to see a variety of characters and situations on “B&B” this week, but once again the Avants have disappeared and Coco and RJ’s texting and driving story also went missing in action after Monday’s episode. Thoughts:

Consequences?
Well, Lt. Baker promised Coco would have to face the legal implications of the texting and driving incident, and Sally vowed to give her sister a ‘talking to’ but there was no follow up by the end of Thursday’s episode, so we’ve yet to learn what Coco will have to deal with. As mentioned previously, it’s odd that they had Coco of all people do something so stupid, but it was likely part of the message; it could happen to anyone no matter how conscientious or well-meaning they are otherwise. It also puts her on a slightly more level playing field with Sally as far as bad judgment goes.

More: Sexuality has changed in soaps over the years

Caroline’s return.
Well, Caroline came back to Los Angeles seeking to reunite with Thomas now that he’s in a relationship with Sally…naturally. This is typical soap fare, and where viewers stand on the matter depends on preference and perspective. I liked the idea of Thomas and Caroline being together previously, but it never came to fruition as Caroline was reluctant after Ridge split with her, and ultimately decided to stay in New York. Thomas now has a genuine, and only slightly less complicated, love of his own in Sally, and Caroline has been brought back to cause conflict. Down the road I may feel torn, but with Caroline having come back at Steffy’s request, not entirely of her own volition, and without any great love story in her and Thomas’ past to revisit, it’s more a case of what might have been, and thus not as appealing as Sally’s current real feelings for him and what they’re creating together. Fans weighed in:

#BoldandBeautiful I am #TeamSally in this whole Sally/Thomas/Caroline mess..Caroline left month ago…she has no right for anything!

I'm torn because I liked Thomas with Caroline but also with Sally. #BoldandBeautiful

Yaaaas I love $bill and steffy campaigning to get Thomas & Caroline back together! I miss #Carmas so much!! #BoldandBeautiful I hate Sally

As far as Steffy and Bill conspiring to ‘get rid of Sally’ goes, this was expected to a point given the Spectra/Forrester history, though the bit with Bill caressing the skyscraper is a tad silly and ‘mustache twirly’. Steffy may be looking out for the family’s interests by trying to bring Thomas back into the fold, but this is an occasion where I feel the formidable Felicia Forrester would have slotted in perfectly to follow in her mother’s footsteps, or even have Taylor return. Not that Steffy isn’t up to the task, but a meddling matriarchal figure would be ideal.

Bottoms up.
In the last Deconstructing B&B, Eric went wild when he learned about Quinn and Ridge’s affair, and now he’s bottomed-out and is holed up, depressed and guzzling beer, in a motel room. Of all the motel rooms in Los Angeles, Eric ended up across the hall from Sheila. Ack. Anyway, it is what it is, and Eric sent her back to the Forrester mansion for his medication. We long ago gave up on the concept of security at the estate, so it was no surprise when Quinn encountered Sheila in her living room. While it was entertaining for them to debate who has the worst track record with Eric, and engage in a mildly threatening face-off, most of us really aren’t buying into this new version of Quinn that’s so easily intimidated and running to Ridge for help. At her worst, Quinn was deadly, so realistically, Sheila coming between her and her man should be spurring her to take lethal measures against the psycho interloper…and that’s what we are waiting to see.

Friday notes.
I’m off Friday, and won’t see the episode live, so please post to share your thoughts on the events at week’s end!