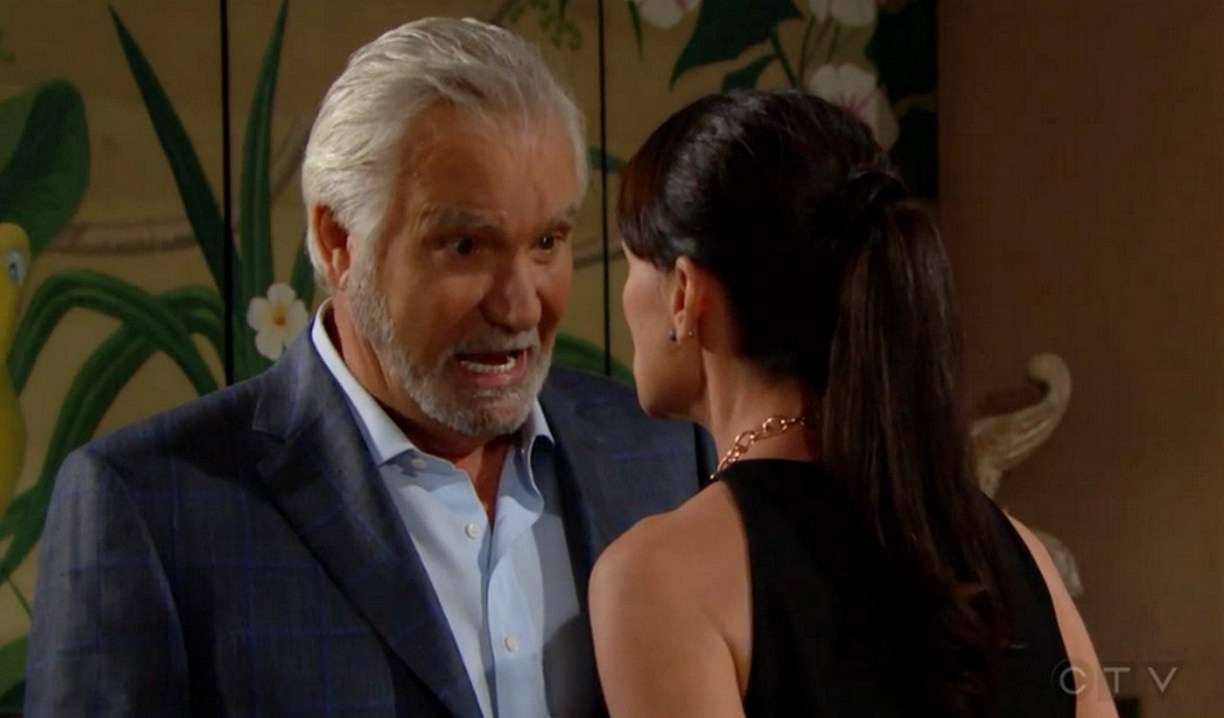 It was another busy and entertaining week on “B&B,” as the much-appreciated trend of featuring several storylines and numerous characters continued, with the highlight being Eric smashing glasses and raving as he boiled over in anger at the betrayal of his wife and son. Thoughts:

The secret is out.
In the last Deconstructing B&B, Sheila was hell bent on exposing Quinn and Ridge, and she finally voiced her accusations to Eric, who naturally, didn’t believe her. In fact, they might have kept it hidden if Quinn hadn’t grown a conscience and blurted out the truth. The truth, of course, being that she and Ridge kissed a few times and have basically had the hots for each other. It was a curious choice on the part of the writer to have these two stop short of having sex, I mean, even Eric didn’t buy that they were able to control themselves. Perhaps it will make it easier to redeem them down the line? Anyway, as much as Eric’s roaring, raging anger was thrilling to witness, it was strange that he insisted on having Sheila stay throughout the confrontation – why the hell would he have wanted her there, really? Nonetheless, she proved to be the last woman standing and slithered over to wrap herself around Eric’s backside as he stared up at Quinn’s portrait. Eek! Here’s hoping Eric doesn’t prove to be enough of a dolt to fall for her again…he can be so frustrating.

Summer fun.
Thomas putting Steffy on the spot on live TV was fun. The summer-themed photo shoot pulled in numerous characters, and also created just enough tension to build anticipation for the upcoming Spectra versus Forrester fashion show challenge in Monte Carlo. This is breezy summer fare, with the ‘romance’ factor of Steffy/Liam, Sally/Thomas, and the newly flirty Katie/Wyatt, and is also a welcome return to the storyline of competing fashion houses that some longtime viewers had missed.

I hope they take the snooty Forresters down a notch or two. Would serve them right for the way they treated Thomas.

Bad call.
As is wont to happen in soaps, immediately after criticizing her sister, Coco made a bad judgement call of her own, with dire results for RJ. The texting while driving message is timely and extremely important, but you couldn’t help but wonder if the girl who was too virtuous to don a two-piece swimsuit would actually take such a risk. It was a stretch that these two do-gooders would drive Ridge’s car without permission, let alone use a cellphone while behind the wheel of it. In any case, the message was conveyed that a split-second decision to pick up the phone while driving can quickly lead to serious consequences…and it could happen to anyone. The accident triggered Brooke’s ‘spidey’ senses, and the ensuing scenes in the hospital were fraught with a certain tension for viewers, who knew the truth. Notably, I loved Bill offering to fly RJ out to the best brain trauma center – so sweet – and that the situation forced Ridge and Bill into civility.

Friday notes.
I liked the way Katie was straight with Quinn about trying to blame Sheila, and you could tell her advice was coming from her own experiences without her actually mentioning it. Nice. Brooke seemed to feel for Ridge who was pretty emotional about his botched relationship with Eric, and now Eric appears to have disappeared, possibly with Sheila of all people. Mess! In other news, I don’t like Coco’s chances once Brooke finds out she was texting and driving. Yike.