Sheila’s Return Showed Bold & Beautiful at Its Best and Worst. Plus, We Need to Talk About Finn’s *Other* Mother 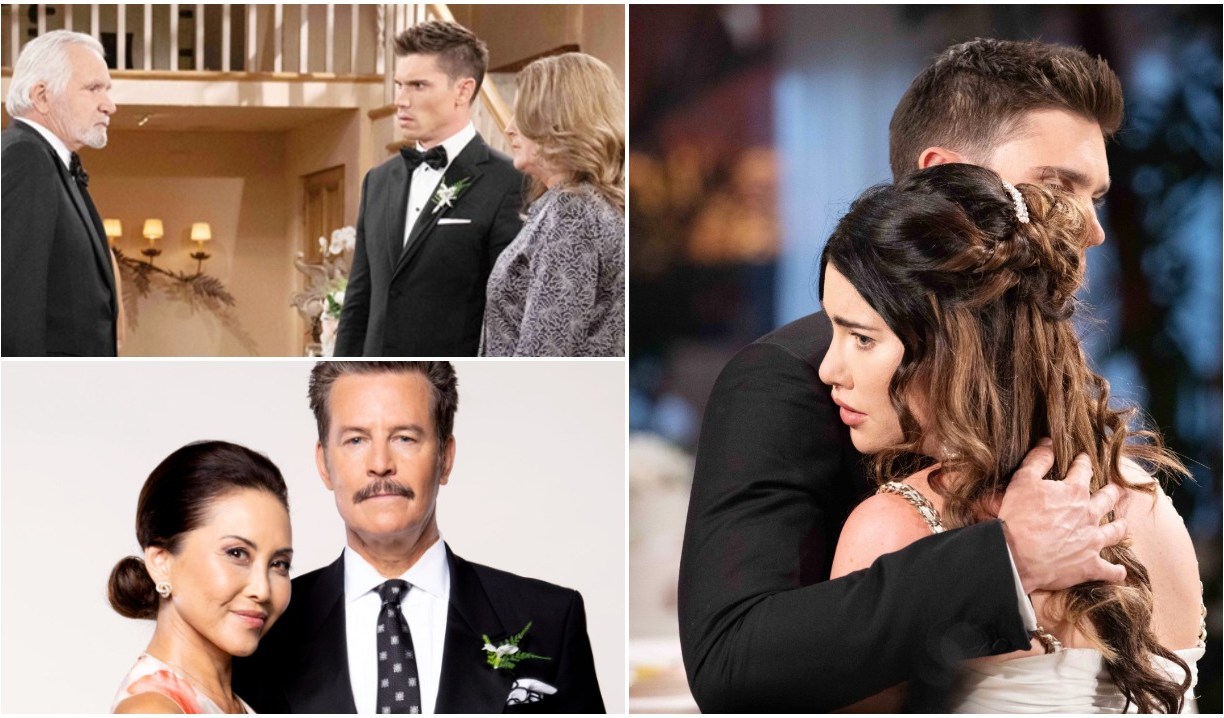 In case you haven’t heard, Sheila Carter’s back in town. And in true Bold & Beautiful fashion, she was pretty much the only game in town this week. Logic went out the window, characters were thrown under the bus and other storylines were shelved, all in service of the iconic villainess. Along the way, we got lessons in what soaps do better than any other medium and were reminded how heavy-handed the writing on this particular serial can be at times. Slip into your wedding finery and let’s head over to the Forrester estate so we can talk about the good, the bad and the Sheila of it all.

Spit It Out, Dude!

One of Bold & Beautiful‘s favorite tricks is to drag out a plot point or moment we all know is coming. What should unfold in the first minute or two of an episode is instead stretched so that it can be used as the cliffhanger designed to get people to tune in tomorrow. 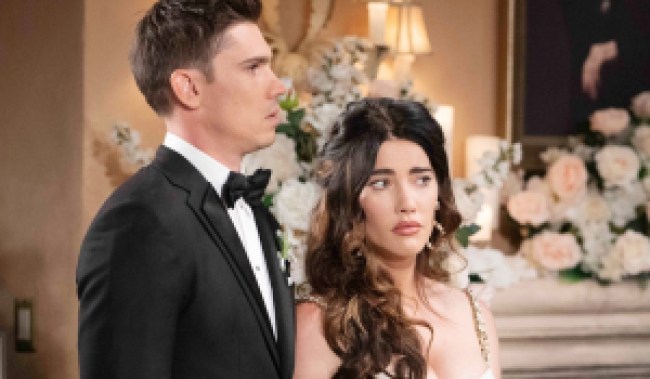 In this case, it was downright ludicrous that Finn didn’t immediately say to the wedding guests, “Y’all won’t believe this, but I just met my birth mom.” Instead, as champagne glasses were dropped and accusations were thrown, he stood there with a befuddled look on his face, babbling about his “exciting news” without actually revealing what it was.

More: How Finn got thrown under the bus

Tuesday’s episode built to Sheila declaring that she was Steffy’s mother-in-law, as if the bride (and the audience) hadn’t been able to connect those dots by that point. Wednesday concluded with Steffy slapping Finn’s mom (and that awesome moment when Sheila’s response was to give her patented evil grin). It wasn’t until Thursday that someone finally thought to escort Sheila out of the mansion so she could stand in the bushes and cackle wickedly.

One thing that I loved? The flashbacks to the night when Sheila shot both Brooke and Taylor before Eric managed to knock the she-devil out. Those scenes initially unfolded nearly 20 years ago but because all of the players involved are still being played by the same actors (even if Hunter Tylo hasn’t been seen in ages), they worked beautifully. 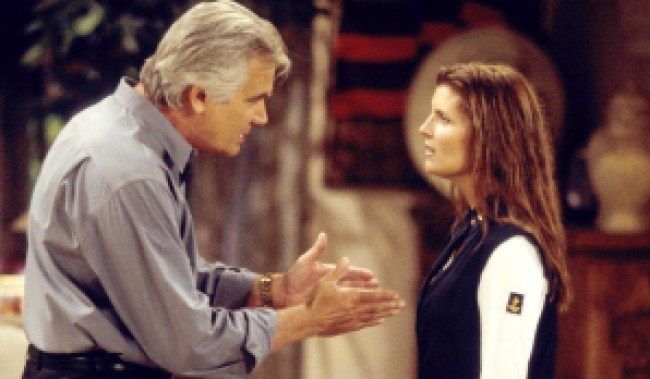 But here’s the problem: Next week’s spoilers reveal that Finn — despite his promise to Steffy — intends to secretly spend time with his newfound mom, to which we have to say… whaaatttt? This might make sense had Finn spent the past year talking about his burning desire to know more about his past in general and biological mom in particular. But because this is a show which careens wildly from plot point to plot point, he never even mentioned his past until about two weeks before Sheila stepped up to claim him as her offspring.

More: The end of Carter and Quinn’s romance?

Meanwhile, there was a complete lack of continuity between Thursday’s ending — which saw Sheila vowing she’d be part of Finn’s life — and Friday’s, in which she was packed up and ready to leave town. If we were to believe that for even a moment, then the writers shouldn’t have had her literally say, “Do you think I’m going to turn my back on [my son] and my grandson? Do you really think you’ve seen the end of me?”

But that’s what happens when you’re writing from plot point to plot point, concerned only about individual scenes as opposed to the overall story arc.

As entertaining as the Sheila-related stuff was — and despite much of it making no sense, it worked on the most basic of levels — the cutaways were Bold & Beautiful at its absolute worst. Donna and Katie sitting around the office looking at pictures of Sheila and talking about her? What was the point of those scenes? They did not share with the audience anything they weren’t getting from the dialogue at the reception. Worse, they included flashbacks to things that there is no way either woman would know about, such as Sheila killing Lance (pictured below) with bees. 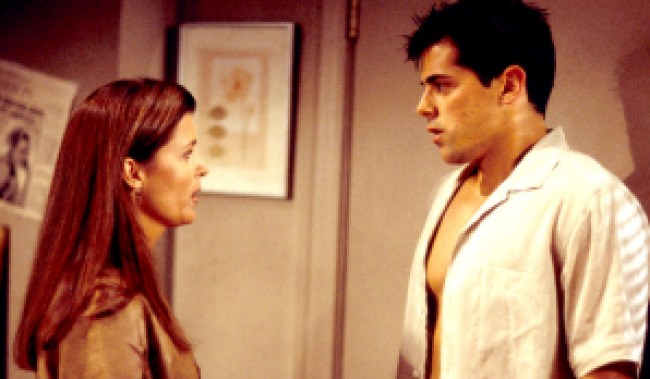 Nothing about the scenes made sense. Why would Donna and Katie be crafting a surprise from Eric in his office? Why would Pam have had (let alone kept) a picture of Eric and Sheila’s wedding (unless she was using it on a dart board)?

I know I sound like a broken record at this point, but Bold and Beautiful desperately needs to stop telling one story at a time. Rather than the pointless scenes of Donna and Katie childishly cutting Sheila out of pictures, that time could have been better used by having Justin make one last plea for Bill’s forgiveness, thus reminding the audience of a plot that has been completely dropped since the attorney struck a deal with Ridge two weeks ago.

If the show insisted on digging in its heels and having someone talk about Sheila, why not make it Quinn and Carter? Given that she’s Eric’s most recent wife — as opposed to Donna, who has suddenly out of nowhere began waxing poetic about her time with the designer — it would have made far more sense. Plus, like the Forresters, Quinn has good reason to hate Sheila. 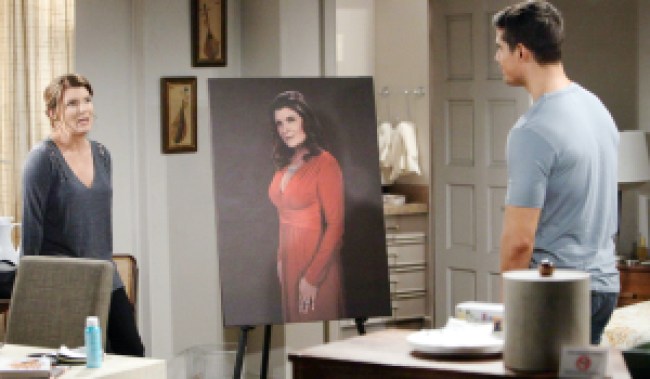 Why would Quinn and Carter be talking about Sheila? Well, Carter still has Quinn’s portrait stashed at his loft. He could have jokingly asked if all of Eric’s exes got portraits, which would have easily led to Quinn telling about the time Sheila commissioned her own portrait, determined to see it hanging where Stephanie’s formerly had.

Trust me, it would have made a whole lot more sense than Donna and Katie’s scenes.

Can We Keep her?

Meanwhile, let’s talk about Jack and Li for a moment, shall we? I don’t know about you, but I definitely want to keep Ted King and Naomi Matsuda around. Anyone familiar with King’s previous soap appearances knows that he’s great at playing the kind of sexy scoundrel who could easily catch the eye of Katie, Brooke, Donna or any other woman on the canvas. Sure, Jack’s married at the moment, but Li was clearly unhappy about the Sheila-related secrets he kept under his cap (or maybe behind that mustache, which I have mixed feelings about). 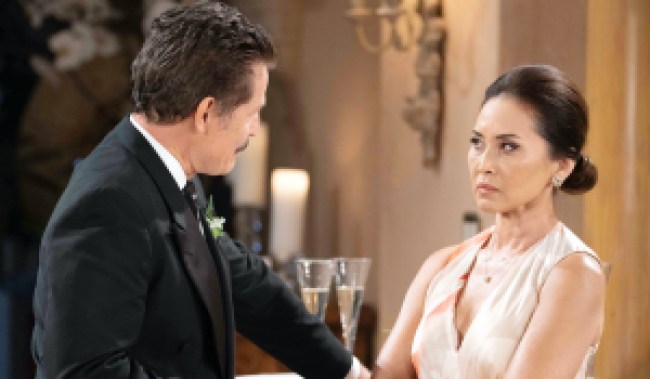 More: Who is Finn’s father?

As for Li, the reception-centric episodes proved that Masuda’s alter ego has far more going on beneath the surface than was immediately evident. While the fire in her eyes was largely aimed in Jack’s direction, I have a feeling we could have a lot of fun watching Finn’s two mothers wage war.

• I was amused by the dialogue which found Steffy saying that because of Sheila, she hadn’t seen her mother for several years. Of course, what went unsaid was, “We all thought Taylor was dead, but it turned out she was in a coma and being cared for by the same prince who kinda-sorta held her hostage the last time we thought she’d died.” Guess that’ll give Steffy and Finn something to talk about on their honeymoon. 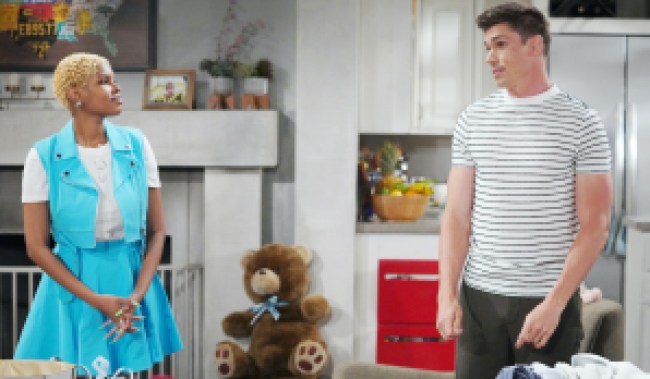 • Anyone else shocked to see Paris stroll into Steffy and Finn’s living room the morning after the reception? Surely she could have found someplace else to stay on their wedding night!

• As I mentioned previously, the whole “Sheila’s about to leave town” thing made no sense. That said, I did like that her entire world view changed based on a heart emoji. It sort of illustrated the issues which lie at the heart of the character’s psychosis. Almost from the beginning — back when she was introduced on The Young and the Restless — Sheila’s world has revolved around the attention of men. The awful things she did were set in motion by the fact that men like Scott Grainger, Eric Forrester and James Warwick were, in essence, nice to her. So of course the slightest sign of affection from her son would be enough for her to stick around.

That’s my take on the mixed-bag that was this week’s episodes. After hitting the comment section with your own thoughts, check out this gallery in which we asked soap fans like yourself to share their unpopular — even controversial — opinions… and boy, did they ever!

Bold & Beautiful Spoiled Its Own...

Is Eric Pulling a Fast One on Quinn...