Bold & Beautiful Spoiled Its Own Surprise Yet Still Scored In A Week That Could’ve Bored — Plus, Top 5 Sinn Wedding Moments 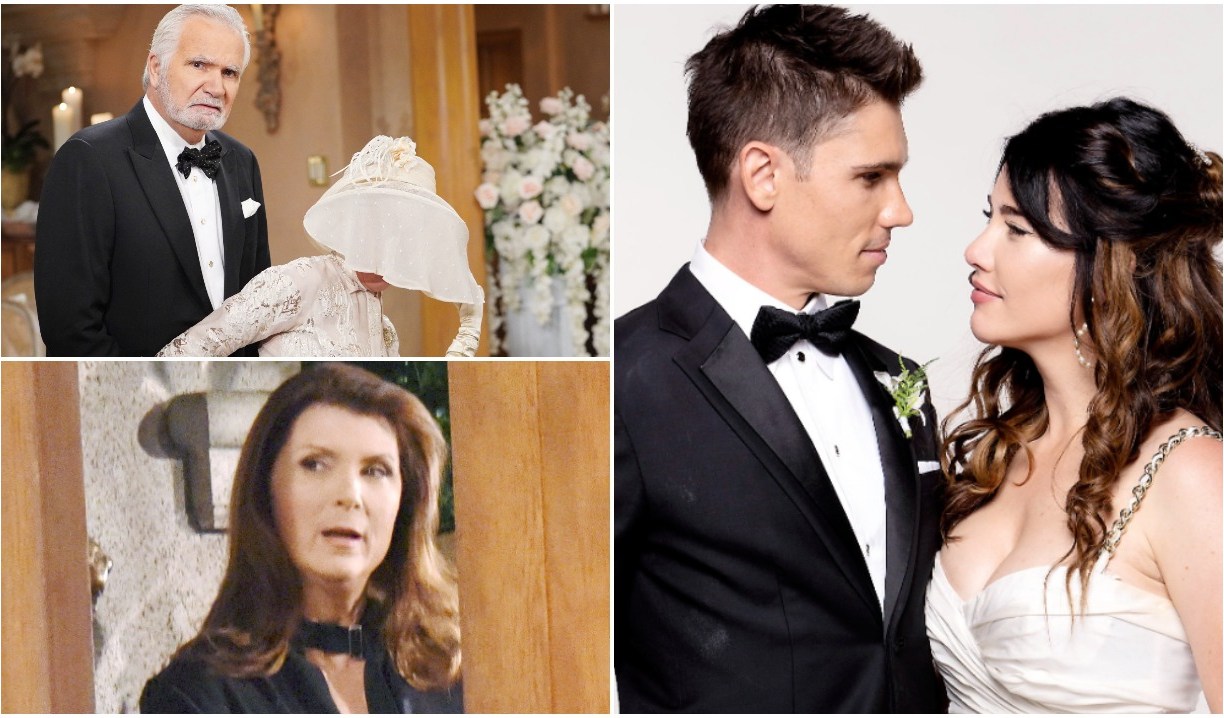 Confession: I went into this week’s episodes of The Bold and the Beautiful expecting to be bored out of my mind. After all, for some reason, the show decided to leak Sheila’s return (and the fact that she was Finn’s mom) a week in advance. It seemed inevitable, given this soap’s history, that we’d be in for a week of endlessly repetitive dialogue about Finn being adopted and probably a few not-so-thinly-veiled references to Sheila. Much to my surprise and delight, what we got instead was a week of supremely solid soap… until Friday, at which point we got exactly what we knew we would, and it fell flat.

Heading for a Wedding

In typical Bold & Beautiful style, the wedding was ridiculously rushed so that they could get to the plot point it was all leading up to, Sheila’s return. Steffy and Finn posted their (misspelled) wedding announcement on the web and literally tied the knot the next day. Of course, given that Eric’s living room has hosted more weddings than I’ve been on cruises, this probably didn’t require a whole lot of effort. I do wish, however, they’d at least thrown in a few lines of dialogue along the lines of, “When you’re rich, you make things happen.” 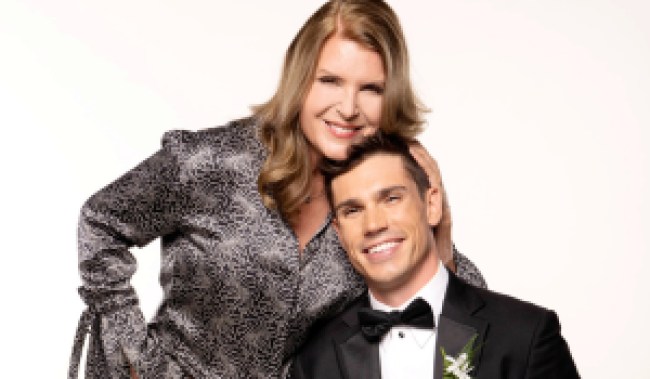 Now, why the show decided to give away Sheila’s return, I’ll never understand. I’ve been covering soaps for decades, and this decision was more shocking to me than just about any plot I’ve ever seen unfold on daytime. What should have happened was that they teased a huge bombshell and then, at the end of Friday’s episode, in strolled Sheila. The internet goes insane over the weekend, and on Monday, everyone tunes in to see the fallout.

That’s how soaps work. Cliffhangers and buzz are literally the lifeblood of the industry. In this case, they apparently decided it was worth revealing the twist in the hope that viewers would tune in out of excitement. To me, it would be like releasing a trailer for The Sixth Sense in which you reveal that the kid sees dead people. Only time (and ratings) will tell if the gamble paid off.

As for Sheila’s return, we’ll wait to talk about that next week, given that all we saw on Friday was, as expected, her stepping from the shadows and telling Finn she was his mother. The real fun will come next week when she’s revealed to the Forrester family.

That said, what we did get of Sheila left me with questions. Why was she hanging out in the guest house? Why did Finn go to the guest house to make a call as opposed to, say, the patio or another room in the main house? Why didn’t he turn on a light when he entered the guest house? Obviously, the easy answer to all this is “for dramatic purposes.” But I’m the kinda person who hates that answer. I expect better.

I’m also going to go out on a limb and say that when they taped Friday’s episode, nobody knew that the show would blab the big reveal. Imagine how powerful that moment would have been if we hadn’t known who was going to step out of the shadows? 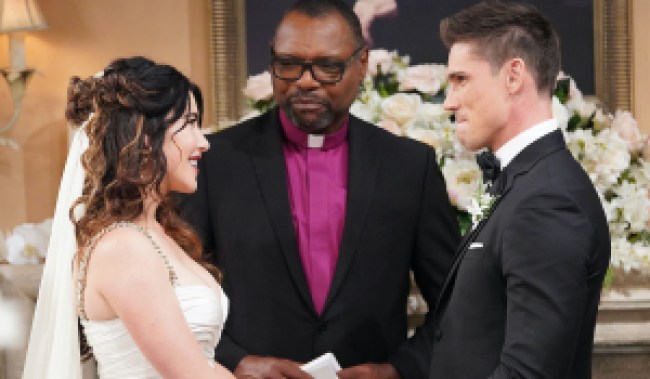 What surprised me most about this week was just how fantastic the episodes leading up to Friday were. There was romance galore with Finn/Steffy, Quinn/Carter and Hope/Liam all getting steamy love scenes in Wednesday’s episode. There were laughs thanks to scripts which focused on character moments instead of their usual heavy-handed, repetitive dialogue. (My favorite quote this week? A tuxed-up Ridge saying, “I thought this was gonna make me look fat, but it turns out it’s the fat that makes me look fat!”)

The episodes were so entertaining that I honestly kinda forgot we were building up to Sheila’s return.

So what were my five favorite moments from the wedding itself, Sheila’s arrival aside?

1. The look on Finn’s face when he saw Steffy in her dress. 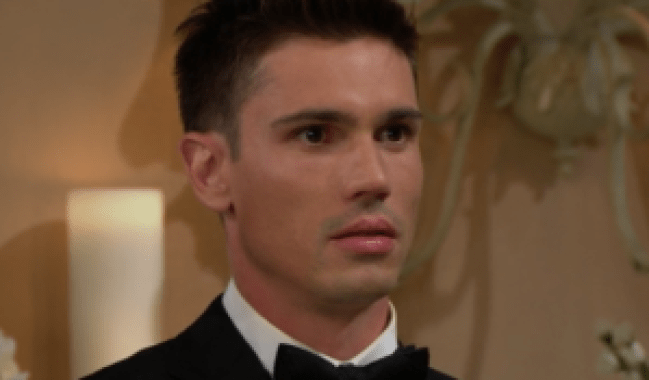 A still picture can’t do it justice, but as Steffy descended the staircase in that stunning dress, Finn looked exactly the way every bride wants her about-to-be husband to look. Stunned by her beauty and more in love than words would ever be able to express.

2. Liam’s expresions
Scott Clifton’s face has to be the eighth wonder of the world, given that it seems capable of expressing a thousand different things in a few fleeting seconds. Whether Liam was winking at Hope or signaling to flower girl Kelly what an excellent job she’d done, he was downright adorable.

3. Ridge’s speech
This episode needs to be Kaye’s Emmy-reel submission next year. I’ve been to a lot of soap weddings, and I can’t remember a father ever so eloquently and emotionally speaking from the heart about what a truly momentous day it is for not only the bride but her dad. “I’m supposed to give you away today, and I don’t know who came up with that idea. How do you give your kid away?” he said, earning a chuckle from the guests. But a second later, my laughter turned to tears when he added, “How do you give away the person that makes you breathe?” And a second later, it was back to laughs as Ridge told everyone to get out. “That’s it, everybody out. One drink, a sandwich and a cookie, that’s it.” This script was friggin’ gorgeous. 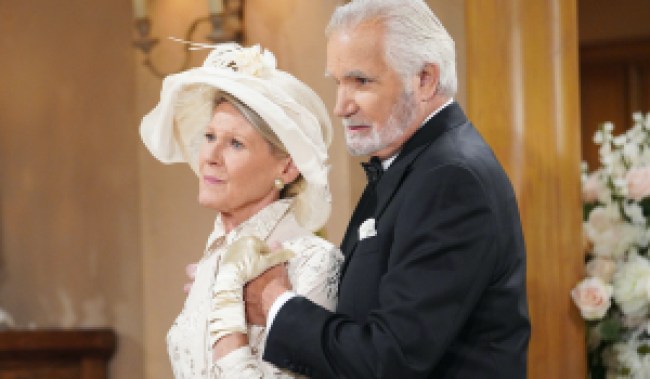 In a day that was all about family, it was appropriate that Steffy’s namesake return to her rightful place above the mantel. “My heart just skipped a beat,” admitted a choked-up Pam upon seeing her sister’s visage. Mine, too, girl. Mine, too.

5. The turning point
For the first time in ages, it felt as if maybe, just maybe, Bold & Beautiful was ready to set aside the Liam/Hope/Steffy triangle. “We can only keep fighting these same battles and and over again so many times,” Hope told her longtime rival (eliciting so loud an “Amen!” from the audience, it was like a disturbance in The Force). Later, Steffy said to her bridesmaid, “Imagine what it would be like for us if our moms actually got along.” Do I really believe Liam’s done waffling? Hell no. But perhaps next time his eye wanders, it will be to someone other than Steffy. 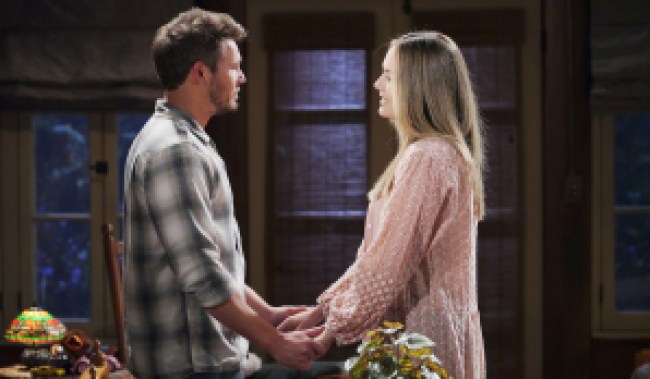 • Liam and Hope were off screen long enough that I was actually happy to see them back. But the fact that Steffy asked Hope to be her matron of honor really shows that these people need bigger social circles. And shouldn’t Steffy have at least talked to Finn about inviting Liam to the ceremony? These are the kind of beats that get skipped when you’re rushing from plot point to plot point.

• Is Carter trying to get himself killed? He was expecting a food delivery and when someone knocked on the door, simply called out, “The door’s open” despite having his back to the door while he worked out. Who does that… especially in Los Angeles? 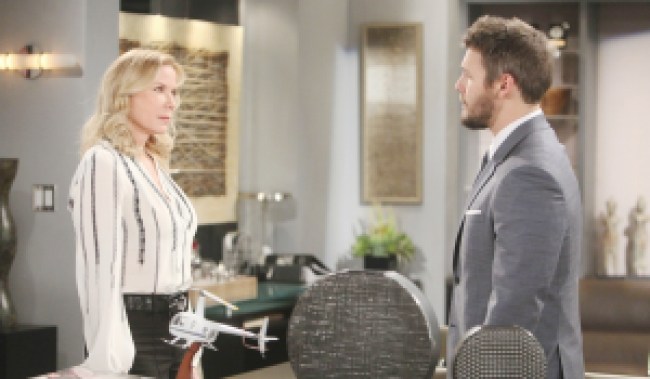 • Sometimes, I think the writers are totally trolling the audience. I mean, to have Liam say of Brooke, “She just happens to have been genetically engineered in a lab to be the perfect mother-in-law” as if we aren’t all going to in unison yell at the screen, “Bet Bridget doesn’t feel that way!”

• In what universe would a wealthy, powerful family like the Forresters not have a security team in place to make sure unwanted guests (including paparazzi) didn’t crash the wedding?

Now before heading to the comments section to share your thoughts about this week’s episodes, take a look at the amazing gallery below featuring gorgeous shots and special moments from the Steffy/Finn wedding. Don’t worry, no need to slip into a nice outfit. But you might want to pour a glass of champagne!

The *Real* Reason Steffy and Finn...