Bold & Beautiful’s Liam Finally Proved What He *Really* Thinks of Steffy and Hope — Plus, Where’s the Quinn We Know and Love? 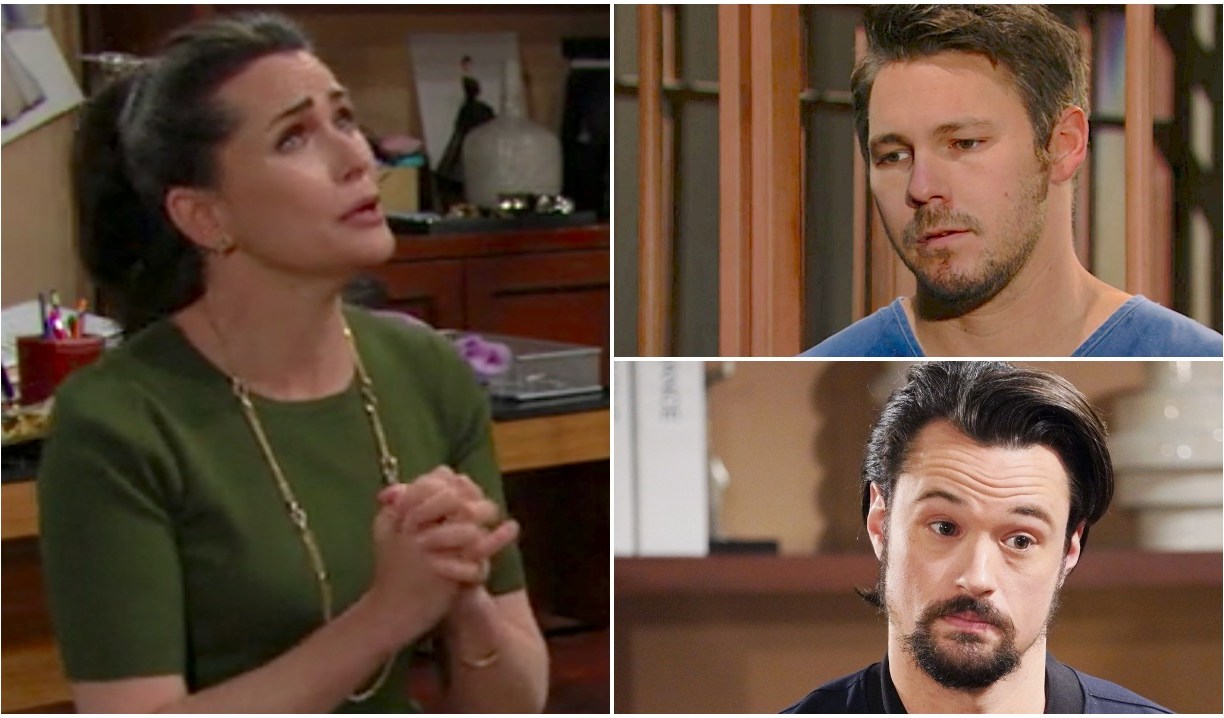 For years, The Bold and the Beautiful viewers have debated whether Liam’s heart belongs to Steffy or Hope. While this has created two extremely devoted fan bases, each of which insists their pairing represents Liam’s true love while the other is just an occasional bump in the road, the truth lies somewhere in the middle. Because it’s undeniable that Liam has — and always will — feelings for both the blonde and the brunette. But this week, we got an interesting bit of insight as to how he really views them. What did we learn? Read on, and we’ll discuss.

I’m pretty sure Liam has interacted with more characters since being locked up than he had over the past three months of his freedom. One after another, people filed into that visitor’s room to converse with Liam. At one point, he hung up from one visitor and had another before he could even be escorted back to his cell. In fact, we never even saw his actual cell until Thursday’s episode!

It was during these scenes that the show, whether purposefully or not, seemed to really define how Liam sees Steffy and Hope. I’ve long said that the best triangles involve situations where one person is torn between two others who represent polar opposites. For example, when General Hospital‘s Jason was bouncing between Liz and Sam, it made sense to me. Why? Because Liz was the embodiment of home and hearth, while Sam was more the action-and-adventure type. On Bold & Beautiful Ridge spent decades bouncing between sensual Brooke and the more grounded (at least back then) Taylor.

More: Revisit the best Bold & Beautiful triangles of all time

We saw a similar dynamic at play this week where Liam’s women were concerned. With Hope, Liam was so concerned about how she could possibly muddle through without him that he even recruited Thomas — Thomas, of all people! — to protect her and “the kids,” by which he meant Douglas and Beth. Liam literally asked the guy who has been obsessed with Hope for years to help out in his absence. Even Wyatt was stunned by his brother’s request of Thomas. (I mean, look at his reaction below, which sort of screams, “What the hell is wrong with you, bro?”) 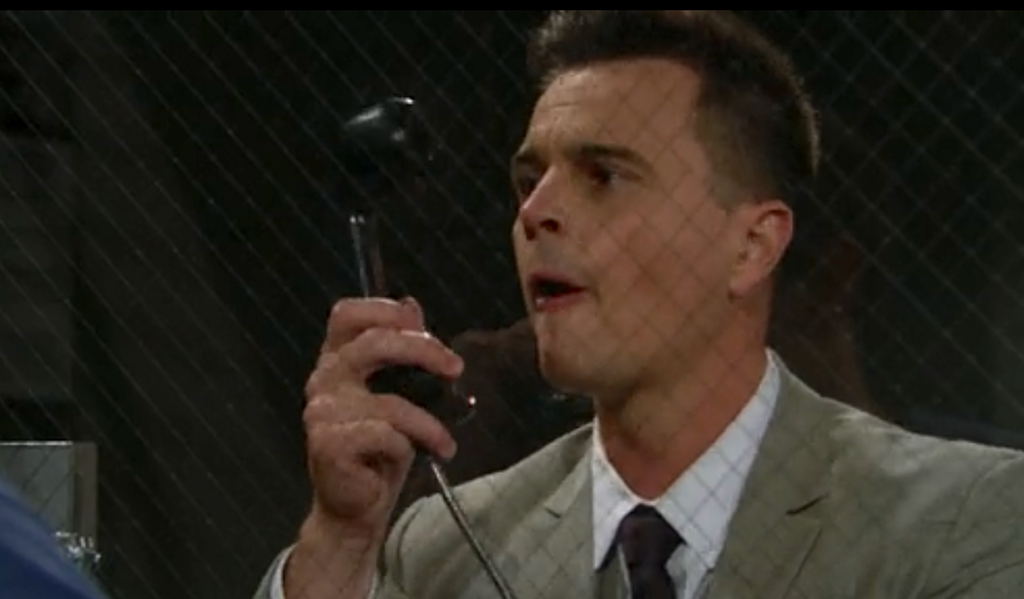 Fast-forward to Steffy’s visit. Not once did Liam suggest that perhaps she might need help while he is behind bars. He didn’t so much as say, “I know you’ll be fine because you’ve got Finn to help raise our daughter.” Nor did he summon Finn to the jail to talk to him about the situation.

More: Get ready, because Poor, Dead Vinny’s coming back

As for Steffy, she seemed to have no concerns about how this might impact their daughter. “She is a happy, confident girl who loves her daddy, that’s never going to change.” But even she was surprised to hear that Liam had asked Thomas to help Hope because he wanted “her to have as much support as humanly possible.” 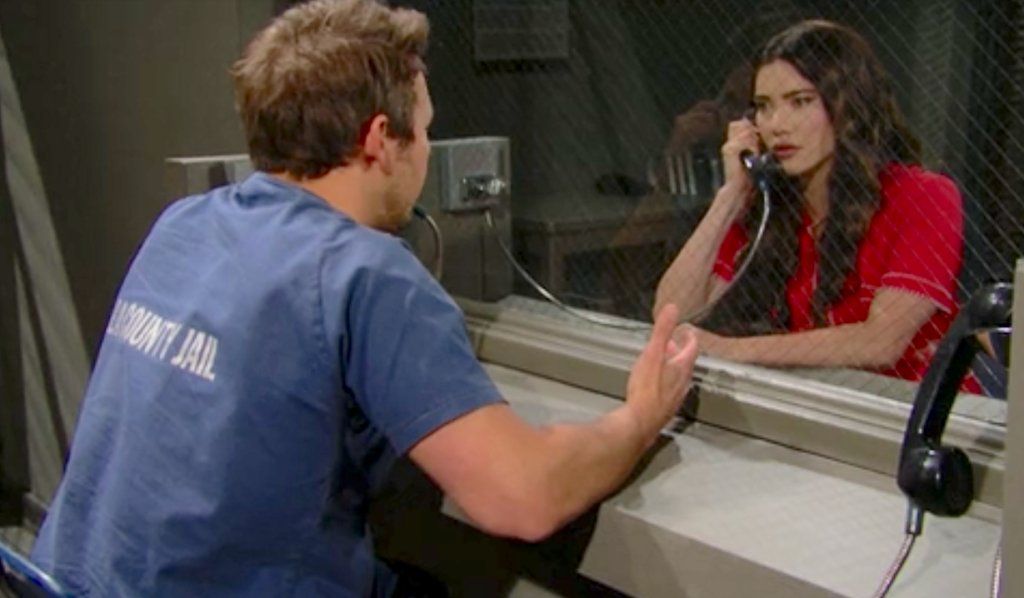 Put these scenes in context with the history shared by these characters, and it becomes clear — at least to me — that Liam sees Hope as something of a fragile flower who must be watched over at all times. In contrast, he seems to view Steffy as the stronger of the two women, better prepared to guard herself against the slings and arrows of cruel fate. It doesn’t necessarily mean he loves one more than the other insomuch as it indicates that his love for each of them is different, molded in part by how he perceives them.

Suddenly, I can’t wait to read the comments section…

Get Off Your Knees, Woman!

Here’s an image I never, ever thought I’d see. 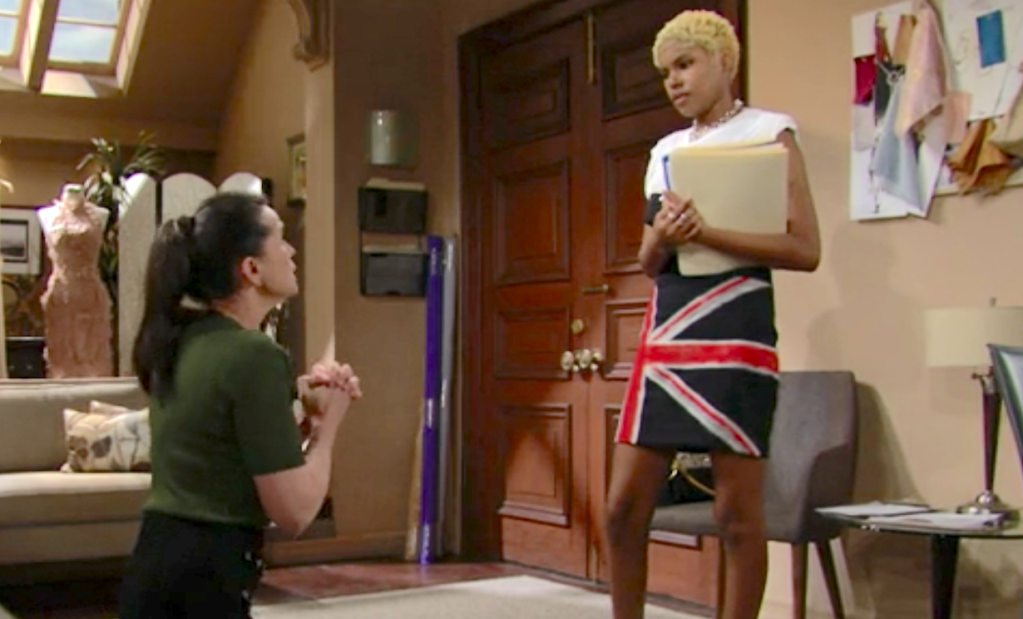 This is not my Quinn Fuller Forrester. In no universe would my Quinn get down on her knees before anyone, let alone a young woman who’s been part of the Forrester Creations family for approximately 12 minutes.

Nope, my Quinn would dig into Paris past — and given that we know next to nothing about her life before coming to Los Angeles, there’s no doubt a secret or two waiting to be unearthed — and blackmail her into submission. I get that Quinn is desperate to hold onto her marriage, but the Quinn I know is a big believer in the whole “desperate times call for desperate measures” philosophy.

Frankly, it should have been Brooke who uncovered the secret, not Paris. Eric’s current and former wives have a history we care about, and nothing would delight Brooke more than to hold this secret over her rival’s head.

I hear that Kiara Barnes has wrapped taping — and so far there’s no word on a recast — so I’m expecting this story to come to a head soon. My guess? Zoe finds out about Carter having boinked her instabestie and skips town, leaving a suddeny-single Carter to fight his feelings for Quinn as Paris lurks in the background, ready to blow them both out of the water. But only time will tell how this story really plays out…

• Not for nothing, but we have to assume Liam is one very popular guy around the cell block. Somehow, he managed to make those drab prison blues look incredibly sexy in a way that none of the things passion for fashion on this show of late have done for the other men.

More: Proof that Liam is the real stallion in the Spencer family

• Shouldn’t Finn and Steffy be planning their wedding? I get that everyone’s upset about Liam and Hope, but times like this are when families (and viewers) need something to look forward to. Before Steffy left for Paris, it seemed as if she and Finn would — in true Forrester style — probably have Carter unite them during a hastily-arranged ceremony in her grandpa’s living room. Since coming back, there hasn’t been a whole lot of movement on that front.

• There were some really nice Ridge/Finn scenes this week, with the two men bonding over fatherhood and what it means. They weren’t designed to advance or recap a plot, which is sort of rare on this particular soap, and it would be nice to see more material like this in the future.

Now that I’ve sounded off with my thoughts on this week’s action, let’s hear what you have to say. Do you agree with my assessment of Liam’s feelings for Steffy and Hope? Are you ready for the “real” Quinn to show up? Sound off in the comments section below, and then join us in celebrating Father’s Day by perusing this gallery in which we get to meet the real-life dads of some of our favorite stars (and, in some cases, the kids who are happy to call our soapsters pop!). 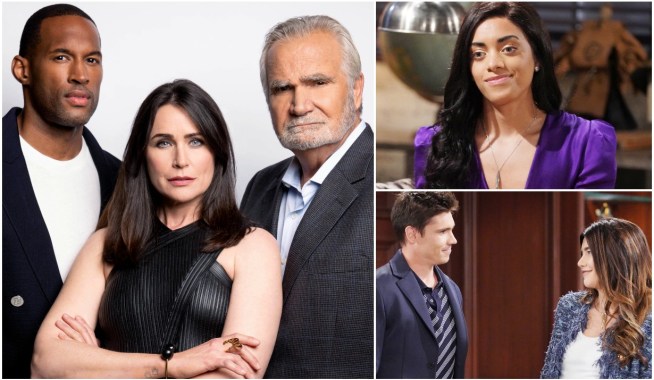 The 'Bad Justin' Story Is Good Fun But Makes No Sense — Plus, the Stage Was Just Set For Quinn's Downfall, and It… Will… Be… *Epic*! 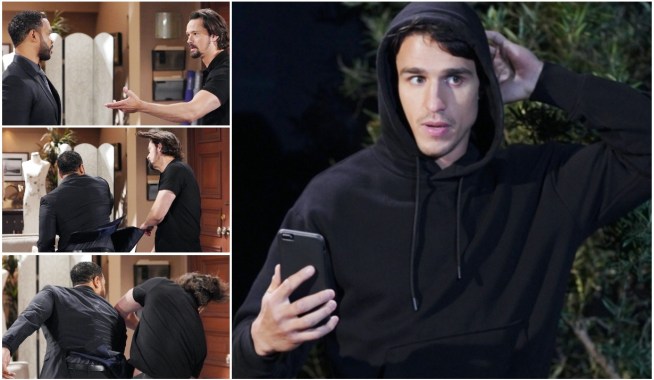