Brooke’s Tribute to Stephanie Was the Holiday Gift We Needed, But What Was Up With That Forrester-Less Party? 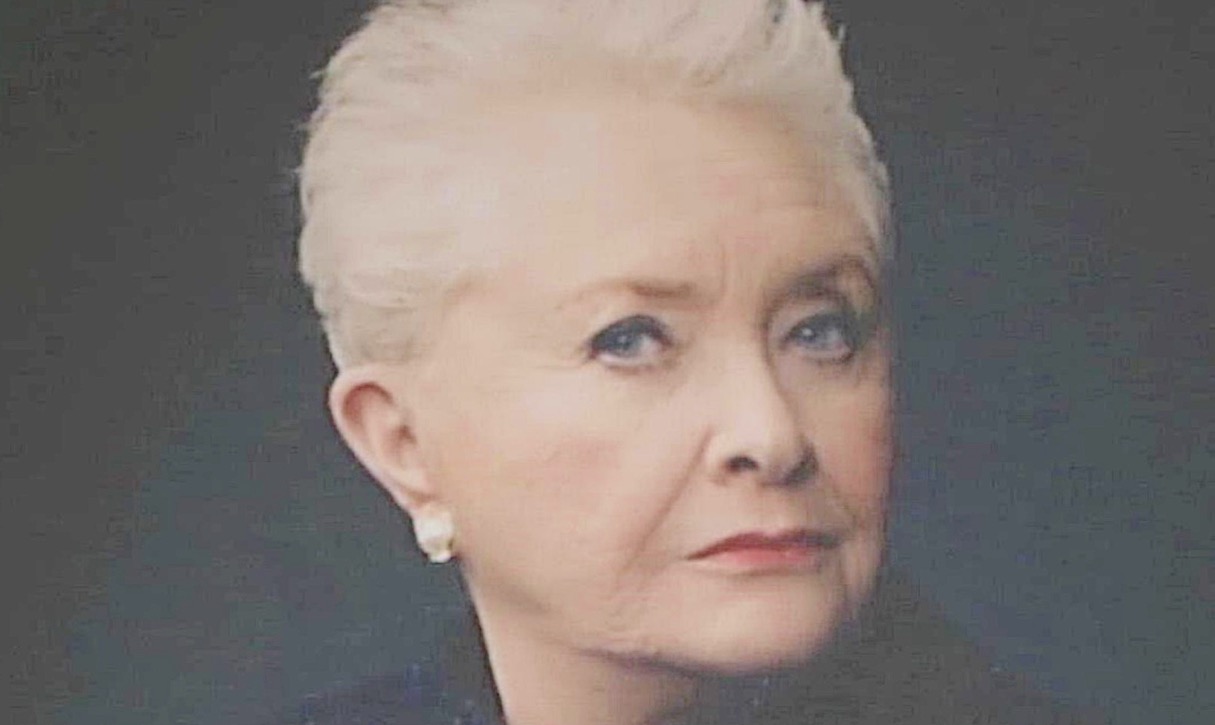 It was a particularly odd week for The Bold and the Beautiful as relationships shifted, but not always in ways which seemed to make a lot of sense. And then there was the annual Forrester Christmas party at which a dead woman’s “return” stole the show from the posers who took over Eric’s living room. If there was one thing that worked incredibly well, it was… well, hold on. We’ll get to that in a moment.

Ever been early to a party, and it’s kinda awkward because there’s only a few other people there and you don’t really know them very well? And worse, you’re several decades older than them and have essentially nothing in common? That’s what it felt like when the week ended with a Christmas Eve party at the Forrester mansion. For some reason, Eric decided to host a soiree attended by no one but Ridge, Brooke, Carter, Zende, Paris and Zoe.

No Pam and Charlie creating chaos in the kitchen. No Bill and Ridge exchanging playful barbs over cocktails. Heck, we didn’t even get Steffy and Liam mugging their way through awkward conversations with respective significant others Finn and Hope. Eric said at one point this bash was simply for “family and close friends” despite the fact that, far as we could tell, there were neither in actual attendance.

Given that the Christmas Eve episode started with Brooke revealing that she’d rehung Stephanie’s portrait above the mantel, we hoped that at some point Quinn would show up to spar with her nemesis over the majorly disrespectful move. But nope, Quinn was apparently off… somewhere, taking with her our one hope of something interesting happening at Eric’s shindig.

Stephanie Would Not Approve

Frankly, having Stephanie loom over the so-called festivities served as a bitter reminder of better days. In the much-missed matriarch, Bold & Beautiful had a strong character with a clear point of view. We knew who Stephanie was and understood her motivations (which largely involved protecting — and occasionally over-protecting — the interests of firstborn son Ridge). She was the very definition of a love-to-hate character, not to mention someone we kinda sorta wanted to be. 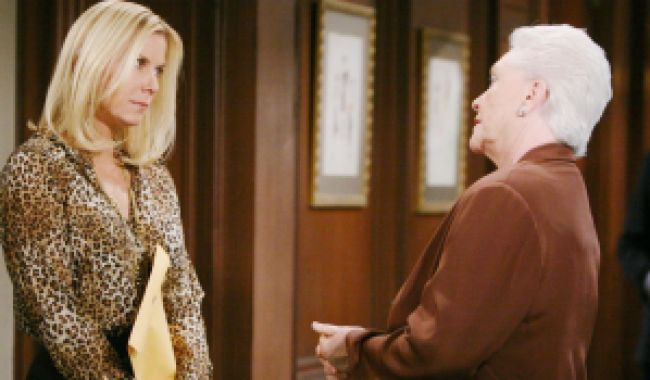 “You don’t think so now, but trust in this… a day will come when you miss me terribly!”

Stephanie was a kick-butts-and-take-names kinda lady, and she is sorely missed.

More: The plot we really don’t want for Steffy

Over the years, we’ve occasionally seen glimpses of Stephanie in her namesake, Steffy. But watching her exchange guilt-stricken looks with Liam every time they’re within five feet of one another reminds us that she is most definitely not cut from the same cloth as her grandmother. Remember, Stephanie not only kept everyone n the dark about Ridge’s true paternity for decades but favored Massimo’s son over her children with Eric.

We’ll be shocked if Steffy’s secret isn’t out by February sweeps.

One of the real highlights of the week had less to do with an actual plot than how people in general — and Steffy in particular — reacted to the mannequin after Charlie brought it back to the Forrester Creations offices. That thing really is the prop of the year, hands down, and with it looking as if we may finally have seen the last of it, I say again… I’ll miss you, Fauxpe. You got us through some rough months.

More: Which soaps are airing over the holidays?

Anybody else wishing Fauxpe could stick around, commenting on the various goings on at Forrester? “Zoe, girl, if you don’t make a play for Zende, I’ll steal him away from Paris myself,” she might say. 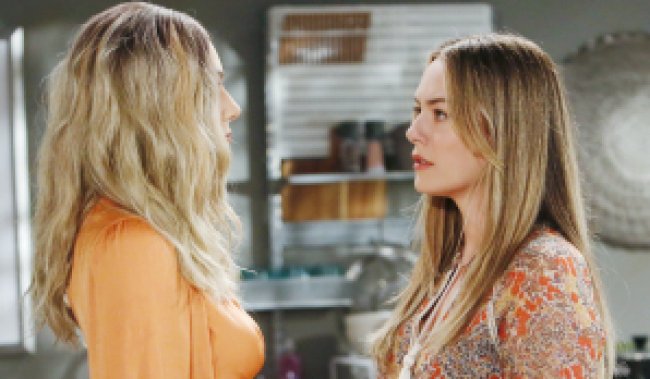 If Hope plays her cards right, Fauxpe could attend boring staff meetings on her behalf.

Speaking of the Buckingham sisters, I laughed aloud at Paris awkwardly reciting her supposed resumé to Carter exactly two minutes after Ridge put the COO in charge of finding someone with exactly her qualifications. At least Ridge looked skeptical when Carter suggested the young woman for the position, justifying it by saying in essence, “Hey, Zoe wasn’t a professional model, and look how well that worked out!”

Because, you know, running a major corporation’s charitable foundation and walking the runway are each “no experience required” positions.

At this point, I’m more invested in the Buckingham sisters than I expected to be. It’s sort of weird how much of a non-entity Carter is in this storyline, which is a little disappointing. If Carter was throwing sparks with Zoe and seemed like a viable love interest for her, the fact that she’s drawn to Zende would be far more interesting.

Instead, the crux of this story is the relationship between the sisters. I kinda wish Paris was a bit more ticked off by Zoe’s sudden shift in attitude. Paris seems like a smart enough cookie to catch on very quickly to the fact that Zoe’s antagonistic attitude is born of jealousy. Were she to have a little fun with that, the whole quadrangle might be more entertaining.

In fact, I’m realizing just this second what the problem with this storyline is: All four of the characters are too nice. Zende is flirtatious in a way that reminds me of long-ago Ridge, but he’s not actually devilish. Zoe was once portrayed as borderline unstable, but that version of her vanished long ago. Paris is a sweet kid who has not shown even a hint that there might be something deeper — let alone darker — bubbling beneath the surface. And Carter…

Get Me a Troublemaker… Stat!

Maybe that’s the problem with Bold & Beautiful right now… there’s simply nobody on the canvas who really stirs things up. Quinn and Brooke’s rivalry never went anywhere, Shauna is apparently a non-starter, Thomas is on his third or fourth redemption arc, Zoe’s lost the edge she had back when she was the possibly crazy cat lady obsessed with Xander.

Much as I like Diamond White’s Paris, I can’t help thinking that this whole story would be far more interesting if instead of competing with a never-before-mentioned sister, Zoe found herself dealing with a spitfire like Zende’s ex, Sasha. 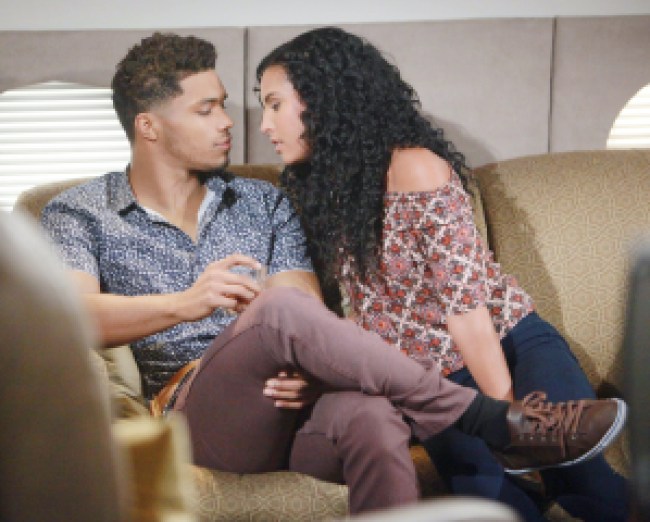 A few years back, Zende (then Rome Flynn) was nearly drawn into the web of bad girl Sasha, who had more fire to her than his current would-be ladies.

Then again, were Felisha Cooper to return, the show would have to explain the complete and total disappearance of Maya. Already, they’re hoping we’ve forgotten Nicole — you know, the wife Zende left behind when he came back to Los Angeles.

But we haven’t forgotten, and we’re still waiting for an explanation.

• How hilarious was it when a shirtless Zende apologized to Paris for being “half-naked.” I mean, technically I suppose it was true, but it’s not like the guy was in his undies.

• This was another week in which we didn’t see Wyatt, Flo, Shauna, Bill or Katie. I can’t help wondering if things are more interesting on their side of town.

• Man, did Bold & Beautiful luck out with Kayla Ewell (ex-Caitlin) being the real-life wife of Tanner Novlan (Finn). She’s such a great body double for Jacqueline MacInnes Wood’s Steffy that I guarantee you, some viewers were left wondering how the show pulled off this week’s steamy love scenes.

That’s my take on this week’s Bold & Beautiful episodes. Before hitting the comments to share your thoughts on everything that went down in the build-up to Christmas, why not flash back on the whole year by visiting our special look at the highs and lows of 2020? 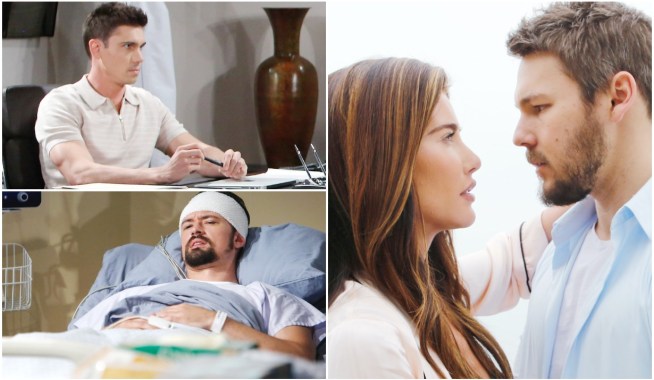 The Bold and the Beautiful's Liam and Steffy Managed to Make Keeping a Sexy Secret Boring — Plus, Bring on Dark Finn 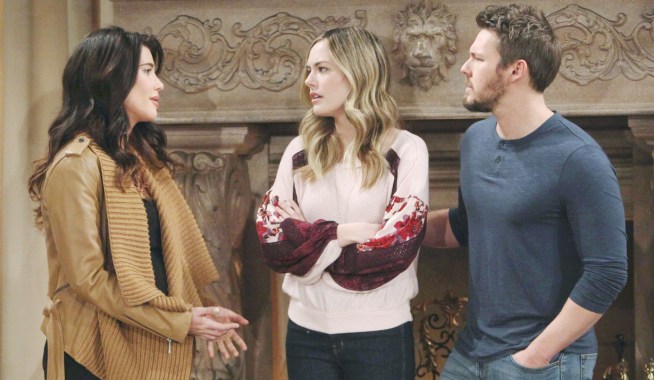