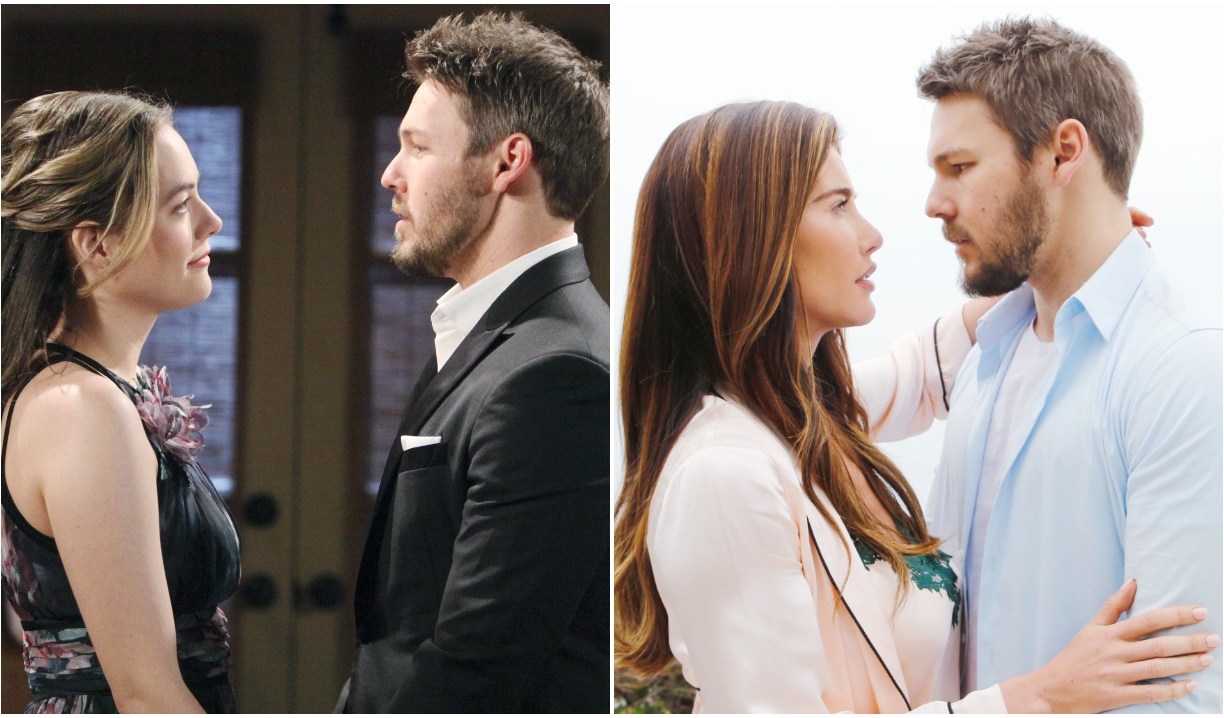 We were reminded this week that all of Thomas’ problems began when he bumped his head. Given that the actions of The Bold and the Beautiful‘s Liam caused me to spend much of this week hitting my head against my desk, you’ll understand if I start talking to and making out with a mannequin. Should I need medical attention, page Steffy’s sexy supposed boyfriend, ’cause I suspect he’s going to have some free time on his hands soon. Let’s discuss why.

We Need to Talk About Liam

You know a character is in need of fixing when even his wonderfully affable portrayer takes to Twitter to admit he wants to “choke him” as much as fans do. That’s what Scott Clifton did after Liam got drunk with and then made love to ex-wife Steffy. I’m sorry to report that things didn’t improve much this week. 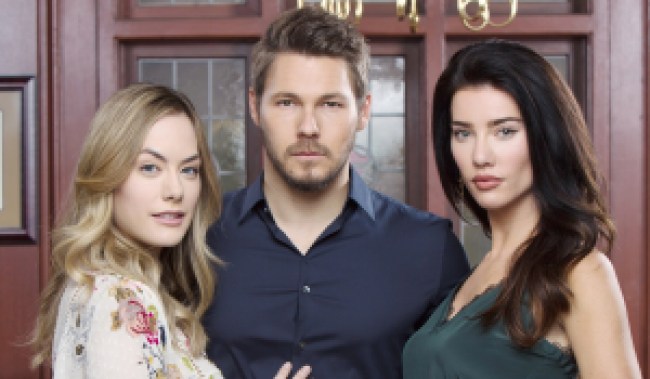 Sure, Liam’s adorable. But beyond that, we’re not sure why either of these smart, sexy women would put up with his antics.

I have to give Steffy credit here, because she seemed pretty cool with the idea of writing off her and Liam’s hookup as, well, just one of those things that sometimes happens. When Liam began talking about the fact that he had to come clean with Hope, Steffy looked at him as if he had two heads.

“You’re putting my relationship with Finn in jeopardy,” she whisper-shouted, given that they were in the very hospital where the boyfriend in question works. “And I love him! We’re in a good place.”

Now, I’d like to take a moment here to point out that Steffy’s idea of “being in a good place” is at least a tad… unconventional. I mean, she said those words literally hours after sleeping with Liam. But hey, she and Finn haven’t talked about being exclusive. And while most couples on this show would already be engaged by this point (I’m lookin’ at you, Carter and Zoe), Finn and Steffy have been taking it slow.

Meanwhile, Liam was having this crisis of conscience while Steffy’s brother was fighting for his life. Sure, Liam is never going to be Thomas’ No. 1 fan, but surely even he could see that Steffy had more important things to deal with than the fact he suddenly felt it necessary to bare his soul to Hope that very minute. Apparently, jumping into bed with Steffy didn’t teach him a dang thing about the consequences of leaping without looking.

I’ve said this before in recent writings, but it bears repeating: Bold & Beautiful has turned a guy we’re supposed to think of as a romantic lead — heck, the romantic lead, given how his love life has dominated the show in recent years — into one of daytime’s most unlikeable characters. This is something that definitely needs to be fixed, pronto. But as Steffy learned in rehab (although maybe not, since she clearly underwent the condensed version), the first step to dealing with a problem is acknowledging it exists.

How would I go about redeeming Liam? So glad you asked!

Frankly, the dude needs to be put on the backburner for a while. The show has had no problem relegating other characters to supporting roles for months on end, which we’ll talk about more in a moment. It might be time to give Liam a rest. And that doesn’t mean that the same fate has to await Steffy and Hope. In fact, the ideal solution would be to have him tell both women he’s setting them free and then leave town for a while so that they can pick up the pieces and move on.

More: What will happen next!

This doesn’t, by the way, mean writing Clifton off. Instead, it means sending the character on a quest to find himself and then, a few months later, return… possibly with a new woman by his side. Perhaps someday — so far down the line that it’s practically another timeline — this triangle can be revisited. Then again, maybe not.

Why Is Shauna a Drama Repellent?

Elsewhere, we’ve spent the past few weeks practically salivating at the notion of BFFs Shauna and Quinn competing for the affections of Eric. After all, both ladies know a thing or two about playing dirty, and the stakes are incredibly high. Not just a kind, charming, rich guy, but — and this, as Bold & Beautiful fans know, is the real prize — their portrait hanging above the mantel. 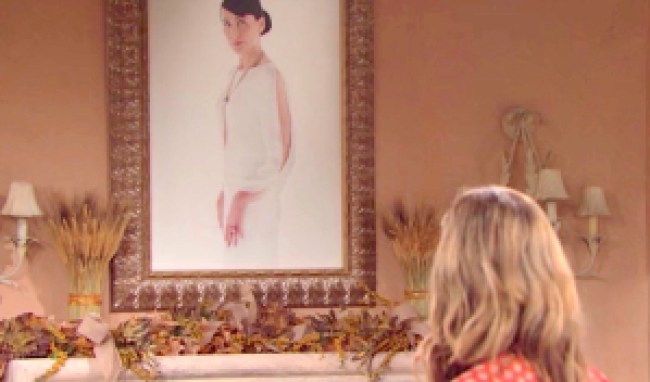 It’s good to have dreams, girl.

Instead, Shauna lived in the guest house for a couple of weeks — during which time she didn’t make a single attempt at seducing Eric — and then Quinn batted her baby blues and reclaimed her man.

Now, you’d be hard-pressed to find a bigger Eric/Quinn fan than me. I’ve dug this pairing since first we found out about their hookup in Monte Carlo. But how did the show manage to take a situation so rife with potential and drain it of absolutely all drama? To quote All About Eve‘s Margo, “You [call yourself] a playwright? A situation pregnant with possibilities, and all you can think is everybody go to sleep.”

What was the point of Eric and Quinn’s breakup and insta-reunion… especially since we saw basically this same scenario play out only a few weeks earlier when Shauna handed Ridge back to Brooke so the two of them could coo at one another.

Shauna has gone from living in the desert to being in a storyline drought. And she’s not alone.

Over the past few years, Bold & Beautiful has focused almost exclusively on the Hope/Liam/Steffy triangle, with other characters popping up for brief storylines before fading into the background again. Where, for example, is Bill? In what universe do you have a popular, dynamic, handsome character who makes any scene more interesting simply by walking into a room… not walk into any rooms?

Then there are Flo and Wyatt. Since getting together, they’ve had virtually no story, unless you count their respective mama dramas. Even the Paris/Zende/Zoe/Carter story was this week reduced to Paris and Zende talking about Thomas’ hospitalization.

I’ve said it before, but it bears repeating: By focusing on one storyline, you’re telling viewers who might be invested in other characters that you have nothing for them. And no, having Brooke and Ridge talk about the Liam/Steffy/Hope mess does not constitute a second story.

• I notice little, subtle things, especially when they represent something bigger. For example, when Hope was talking to Thomas after his surgery, she said a nurse had promised to bring him an extra pudding. But when referring to the nurse, she specifically said “he,” playing against the stereotypical norm which causes most people to (wrongly) think “she” when they refer to a nurse.

* By the same token, little things can also be wildly annoying. For example, Steffy and Liam left the hospital — separately — and then met moments later at her house… with both of them in new outfits. Sure, Steffy might have gotten home from the hospital and changed, but there’s no way Liam swung by his place, changed clothes, then drove out to the beach house!

• Thomas’ doctors were apparently so skilled, they managed to do complicated brain surgery without having to shave his head.

• My mom keeps asking what I want for Christmas, and I can’t think of a darn thing I really want or need. Because of this show, I’m considering asking for a portrait to hang above the fireplace. And a fireplace.

Now that you’ve read my thoughts on this week’s episodes, share your take in the comment section. And don’t forget to visit this gallery of daytime’s all-time best couples. Pretty sure you’ll find a few Bold & Beautiful faves in the mix.

The Many, Many Reasons Liam Sleeping...

The Bold and the Beautiful's Liam...