The Bold and the Beautiful Slayed Us By Bringing Thomas’ Mannequin to Life — Plus, Why Liam Must Always Be Right 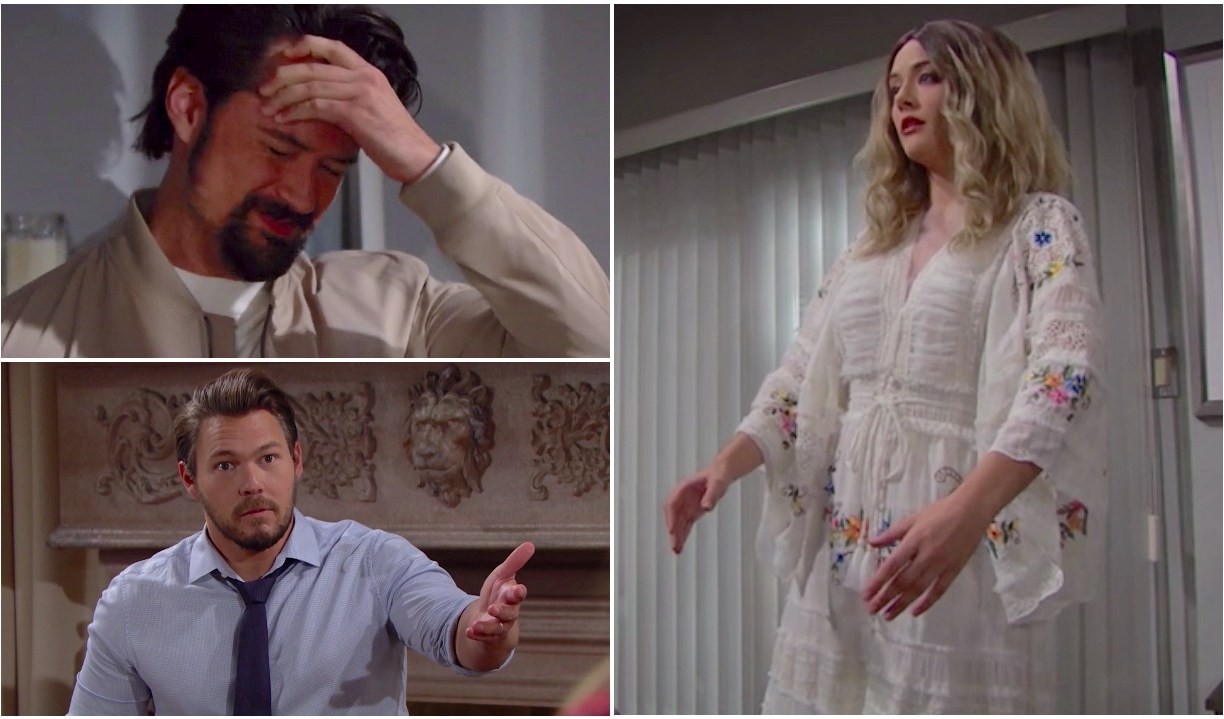 Yes, yes, we’re going to talk about the mannequin. How could we not? But there’s plenty of other stuff to discuss, too, where this week’s episodes of The Bold and the Beautiful are concerned. Things like whether Shauna or Quinn is most in need of a reality check, the problem with Steffy’s new relationship and an odd way in which this soap is unlike any of its currently-airing brethren.

We knew from the moment Thomas unboxed the mannequin that Fauxpe, as I’ve taken to calling her, would come to life. So while it wasn’t a surprise to see Annika Noelle animate Hope’s plastic doppelgänger, it was… well, cool as hell. The only things missing were thunder rolling in the background (although the scary music cues were a good substitute) and someone shouting, “She’s alive!”

It’s fascinating to me that a show which hasn’t always been great when it comes to pacing is getting the beats of this story so right. The writers know exactly when the audience is thinking, “OK, great, so Thomas has a mannequin… what’s next?” Suddenly, he begins hearing it talk. A week later, when we’re asking, “Sure, but what else do you have in your bag of tricks?” Fauxpe’s eyes glow and she starts suggesting Thomas off his rival. 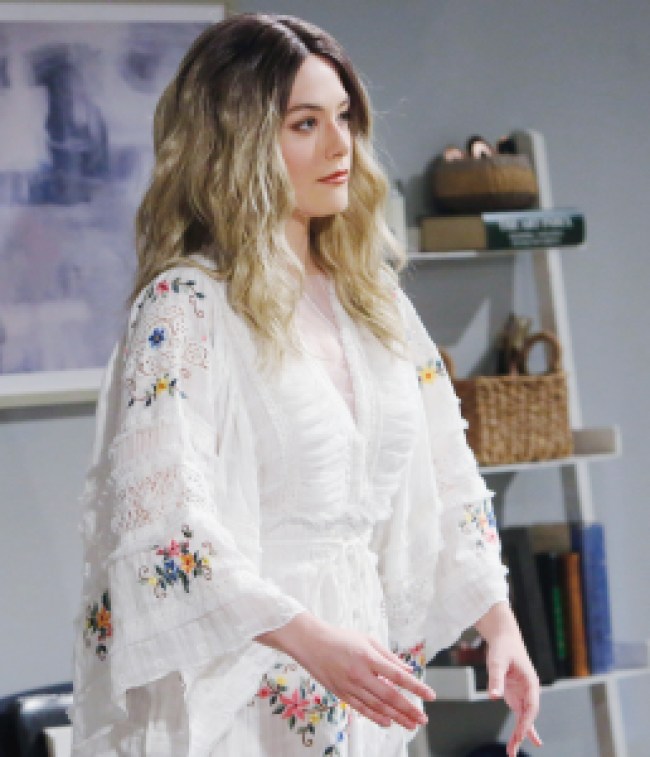 “I want you, Thomas. Also, opposable thumbs. A fake girl can dream.”

And now? We’ve got a walking, talking mannequin declaring her love for her flesh-and-blood boyfriend, and how can any of us not be thinking, “Wait, are they gonna go all the way?” And by “they” we mean both the writers and this bonkers new couple. After all, Thomas has clearly undressed Fauxpe, seeing as she recently donned a new frock. The whole thing is insane and, as Charlie recently wrote, we can’t wait to see where the crazy train goes next.

Who Has the Talking Stick?

There’s a moment during the musical Into the Woods where a frustrated mother looks at her son and admits, “Sometimes I fear you’re touched.” I found myself thinking that same thing this week while listening to Hope endlessly defend Thomas to her husband. Yes, Liam overreacts to pretty much everything in the same way I get overly excited whenever a picture of a cruise ship pops up on my screen. But in situations like this, Liam is always right. Why? Because that’s his job. 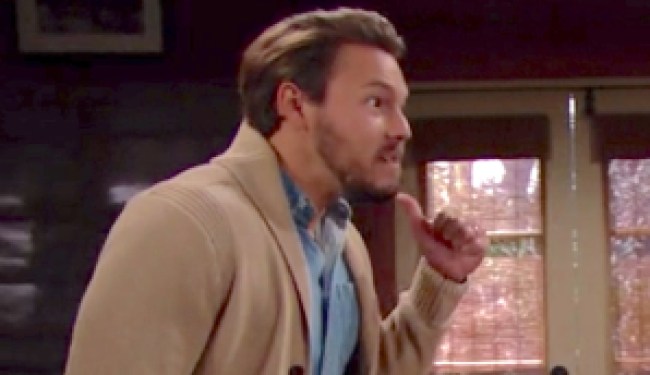 “Did you hear what the dude said? I’m always right!”

In the same way most of us in the real world have occupations, so do soap characters. But theirs have less to do with where they punch the clock than how they move the story forward. Like you or I, they can change jobs — and often do, over the years — but you can pretty much tell what role they’ve been assigned in a current story if you look closely. In the Thomas/Hope/Liam saga, Hope’s job is to be adorably naive, Thomas’ is to be borderline crazy, and Liam’s is to be right.

Liam’s the truth-teller to whom no one will listen despite the fact that everybody in general — and Hope, in particular — has good reason to do so. When this story ends, Liam will move into recreational mode, meaning he will do the “I told you so” dance long after the music has stopped playing.

Friends Till the End… of the Driveway

It was nice to hear Shauna admit that she’s still struggling to get over her feelings for Ridge. Had she not mentioned it, I’d have just assumed she was over him and moving quickly on, as people on this show tend to do. But I wasn’t buying her whole “I would have moved out, but Eric really wanted me to stay” routine. To paraphrase my mom, “If Eric wanted you to jump off a bridge, would you do that, too?”

I liked the scenes in which Quinn yet again apologized to Eric. Sometimes, this show’s dialogue can feel extremely repetitive (because, er, it is), but in this case, it makes sense. Quinn should have to work at persuading Eric to forgive her. For his part, Eric should insist that Quinn invite Brooke over to watch her eat several helpings of humble pie. 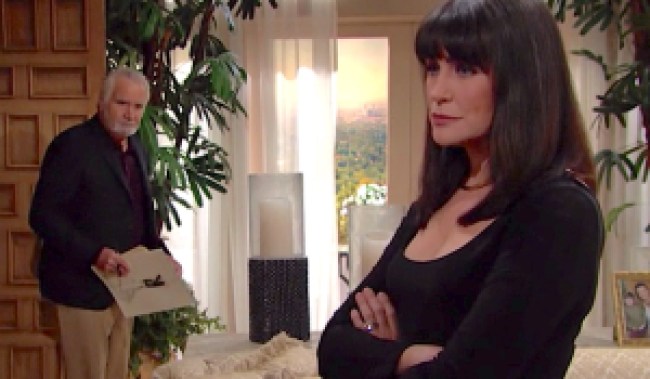 “Note to self,” thought Eric. “Change the locks.”

It seems safe to assume that Shauna moving out of the Forrester guest house doesn’t mean her hooking up with Eric is out of the question. There’s far too much fun to be had with pitting Quinn and Shauna against one another not only as potential love interests for Eric but also as frenemies. Sure, they claim to be besties from way back, but put a rich guy between them and let the games begin.

It’s starting to feel as if Finn was one of those bright, shiny objects this show sometimes becomes infatuated with, only to quickly put on the shelf with Xander, Beverly, Hector, Samantha… some of whom I’m willing to bet you couldn’t pick out of a lineup. I hope that’s not true, but with Kelly’s parents spending so much time together, I can’t help wondering if we’re about to jump on the Hope/Liam/Steffy merry-go-round again.

More: Star tells fans why they “must” watch

For whatever reason, this show has long struggled to introduce new characters into the existing mix. The exception to the rule? Bill Spencer and his sons. Maybe it helps that Dollar Bill is a legacy character, given that his dad was one of the soap’s original characters. But folks who don’t share a bloodline to the Spencer, Logan or Forrester families don’t tend to last long. Heck, even some Forresters fail to make the cut… right, Felicia?

• While listening to Flo and Wyatt discuss the possibility of swapping one houseguest (his mom) for another (her mom), it occurred to me that Bold & Beautiful is the only soap on which characters don’t routinely live in a hotel. In fact, the show doesn’t even have a hotel as a permanent set, unlike General Hospital (the Metro Court), Days of Our Lives (the Salem Inn) or Young & Restless (which actually has both the Grand Phoenix and the Genoa City Athletic Club, which went from hot spot to non-existent overnight).

* There wasn’t much on the Carter/Zoe/Zende/Paris front this week, but I was glad there were blessedly few flashbacks to the post-proposal scenes in which the fire alarms were blaring. Given how often we’re sure to see that sequence, it was an odd choice to set them against such an annoying aural backdrop. In any case, at this point, we’re just counting down to the wedding. Have we taken bets yet on whether it’ll be in the Forrester living room? Because you know it will be!

That’s my take on this week’s episodes, so now it’s time to hit the comments with yours. Then, why not visit the gallery below to check out photos of your favorite Bold & Beautiful stars with their real-life partners. 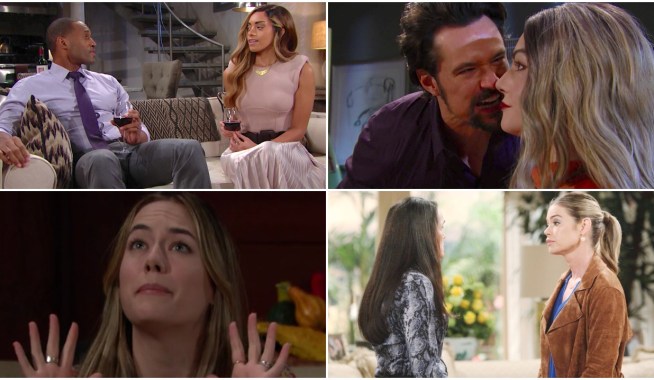 Everything Wrong With What Liam Just Did — Plus, the Twist That's Gonna Tick off a *Whole* Lotta Viewers 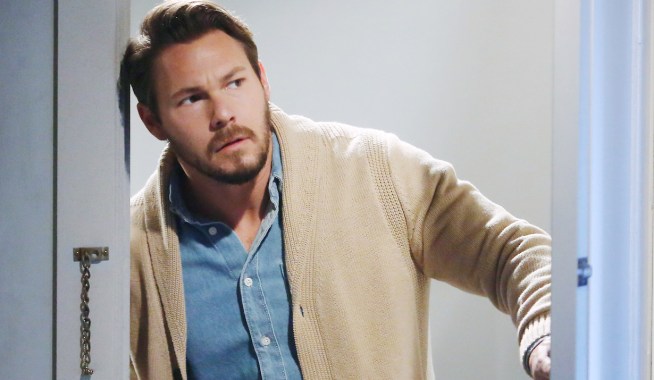