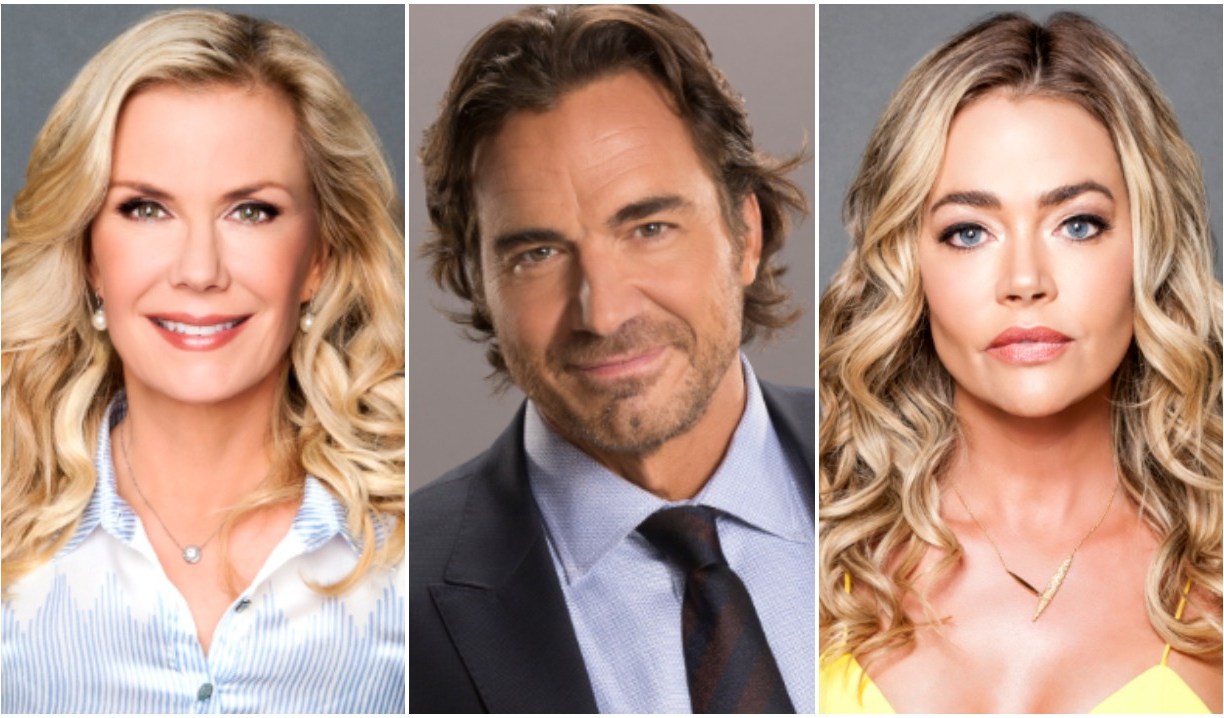 Over the past few weeks, The Bold and the Beautiful has been downright whiplash-inducing, and it would appear we’re about to make another jarring swerve. But after what transpired over the past few days, we can’t help thinking it’s time to sit the sudser down for a little tough love. Because at this point, we’re beginning to wonder if someone has fallen asleep at the wheel.

If you tuned in this week looking for an update on Steffy’s condition, you were out of luck. Despite being the center of the drama for about two weeks (and helping bring the show great ratings), there was virtually no mention of the switchblade-wielding, pill-popping, recovery-seeking heroine this week. Instead, the action focused almost exclusively on Ridge’s plan to dash down the aisle with Shauna.

I’ve written before about this soap’s tendency to focus on one story at a time and how frustrating that is, particularly for viewers who may not be interested in the tale the show has decided to go all-in on. Imagine if instead of cutting from scenes of Quinn and Shauna talking about the wedding to ones in which Brooke and Donna complained about said wedding, we instead got to see Steffy’s progress in rehab. Doing so gives viewers twice as much to be invested in and, not for nothing, cuts way down on the repetitive exposition which often bogs this show down.

But hey, we don’t make the decisions, right? So let’s move on and talk about the plot-of-the-week, shall we?

There was potential here for big drama, and honestly, as the week began, it looked like we were going to get it. Fresh from having overheard Quinn and Shauna recapping for the hundredth time what really went down in Vegas, Katie ran straight to Brooke. Sorry, no, she didn’t even phone her sis to share this shocking news, opting instead to tell Ridge. Now, this didn’t make much sense on a few levels, not the least of which is the complicated history that Katie shares with the guy who once tied a red ribbon on her finger. But as usual, I digress.

The point is this: Instead of Brooke finding out what had gone down and racing to stop the wedding, bursting in during a Friday cliffhanger to leave us wondering if she’d made it before the vows could be exchanged, we got perhaps the weirdest “payoff” to a story in recent memory. Ridge calmly called Shauna, who admitted to having tricked him into becoming her groom. 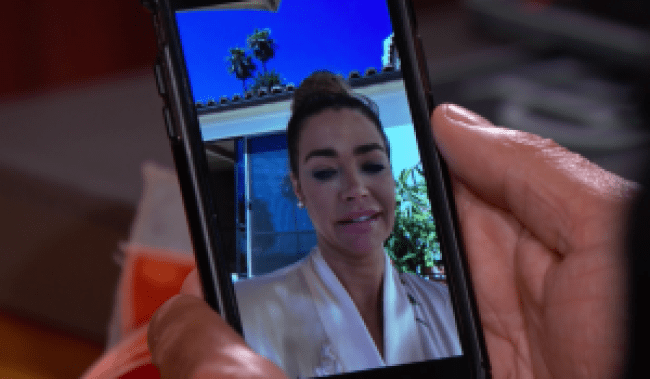 What this scene really needed was face time, not Facetime.

More: Shauna, we tried to warn ya [PHOTOS]

So problem No. 1: This all played out over a video call. After months in isolation during which many of us have only been able to communicate with loved ones in a similar fashion, I assure you, this was the last thing we wanted to see. I’m sure there was a reason — based on the way things were filmed, I’m guessing Denise Richards (Shauna) was tied up with outside projects that made it impossible for her to report to the set. But even if that was the case, the show could have pumped the brakes and pointed the cameras at other people until this payoff could be played for all it was worth.

Worse, there was absolutely no drama. No tears or pleading for forgiveness on the part of Shauna, no outrage on the part of Ridge. I’ve been more upset about a screwed-up Chinese-food delivery than Ridge was about his life having been toyed with.

More: Will Shauna target Bill next?

The most baffling moment, however, was yet to come. Because once Ridge had pretty casually ended things with Shauna, he tried to play it off as if he’d never intended to go through with the ceremony. Now, Brooke being Brooke, she bought this… despite the fact that only hours earlier (in soap time), she’d begged Ridge not to marry Shauna and he’d ignored both her pleas and the tears running down her face. But perhaps for the first time, I understood the true power of those roses handed out on The Bachelor each week, because Ridge used one to wipe Brooke’s memory of everything that had gone down between them over the past few months.

Did he forget having overheard her say that part of her would always love Bill and how much that had upset him? Did she forget that long before Shauna tricked Carter into filing the divorce papers, Ridge had had them drawn up? Are we supposed to forget that Ridge wasn’t hauled off to Vegas against his will, he purposely went there to be with Shauna, with whom he’d clearly fallen in love?

Apparently, yes, we’re all supposed to forget all those things, because by Thursday, Ridge and Brooke had reunited, Carter had informed them that they were still legally wed, and Brooke was free to head off for a week-ending confrontation with Quinn.

The highlight of the week for me was the Quinn/Eric fight. Unlike the rest of the fallout from the Ridge/Shauna storyline, this one paid off pretty decently. Eric was, as you’d expect, horrified to learn what his wife had done. If there’s one through line where he’s concerned, it is that he always has and always will love Brooke. Frankly, he’s probably more devoted to her than Ridge. More than once, I’ve wondered if Brooke misread the stars when she was figuring out her “destiny.” “Oh, portrait… at least we’ll always have each other.”

Quinn tried defending herself, but there wasn’t much she could say aside from “Whoops, guess ya caught me.” But when their fight ended, I couldn’t help thinking they’d missed yet another opportunity for a big, dramatic moment by not having Eric boot her from the house. Were it not so well-mounted, he might have even taken her portrait down from above the mantel, shouting, “And take this trash with you!”

That’s probably not really Eric’s style, however. Being a gentleman, he would move her into the guest house or even go to a hotel himself until she could figure out where she’d be living. Plus, had Eric tossed her out, Quinn would not have been where she needed to be when Brooke came over to read her the riot act. Now, I know this might rub some people the wrong way, but I’m gonna confess to being totally #TeamQuinn here. Sorry, but like her, I find the idea of Ridge and Brooke somehow being star-crossed lovers destined to be together ludicrous, given how often they’ve hurt and/or cheated on one another.

More: What will a furious Quinn do next?

But here again was another missed opportunity: Imagine how much fuel would have been thrown on the fire that is Quinn’s burning hatred toward Brooke had her nemesis been the one to tell Eric what his wife had done! Our Friday cliffhanger could have been Quinn going to Brooke to declare, “You haven’t seen the last of me! None of you have!” as the music, always used so effectively on this soap, thundered ominously in the background.

Now, if you’re thinking that you can’t wait to see how Quinn lashes out in the wake of this week’s twists, I have some bad news for you: There’s not a single mention of her, Ridge, Brooke, Eric or Shauna in next week’s spoilers. On the plus side, we will finally dive back into Steffy’s story…

The only other story to play this week involved the return of Eric’s grandson, Zende. You’ll recall that when last we saw the handsome young designer, he was jetting to the overseas division with wife Nicole and their daughter. Yet here he was, back in L.A. with neither of them and, five minutes after arriving, flirting with Zoe while brushing off questions about his missus.

This makes me wonder… what the heck is happening over at Forrester International? First Maya came back sans hubby Rick, now Zende without Nicole. Maya’s been back in town for ages, and even before she vanished into the ether, nobody bothered to ask why she and Rick had separated. If The Bold and the Beautiful wants us to invest in a Zende/Zoe/Carter triangle — and clearly they do — they’re going to have to fill us in on why Nicole’s man is suddenly single and ready to mingle. (Guess we’re not gonna get that Maya/Zende story we’d been hoping for.)

Meanwhile, can we just take a moment to acknowledge that poor, poor Carter is clearly going to be the guy who winds up losing in this scenario. Zende wasn’t in town five minutes before Zoe was looking at him the way I do a French fry. Every word out of her mouth basically sounded like Friends’ Joey saying, “How you doin’?” Even as she was making plans to celebrate Carter’s promotion with him, she was looking at a picture of Zende on her computer! Sorry, Carter… but at least you got that great promotion last week.

That’s it for this week. Hit the comments to share your thoughts on what went down over the past few days, then click here to check out a gallery in which we rank the all-time best Bold & Beautiful characters. Something tells me you’ll have opinions on who landed where! 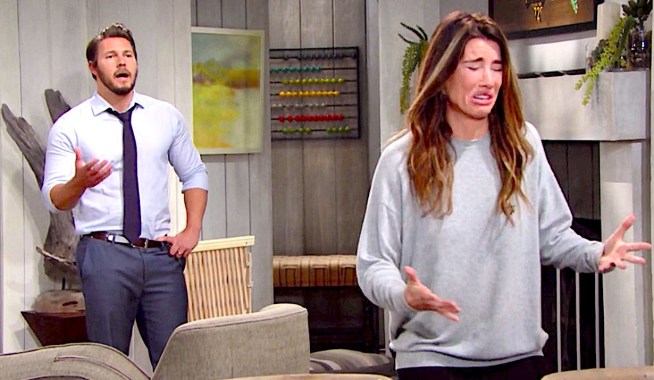 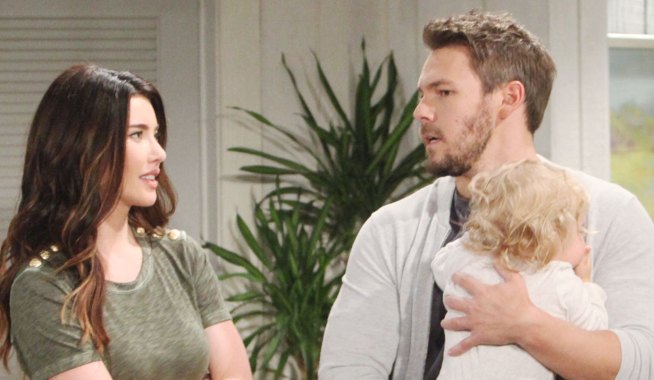