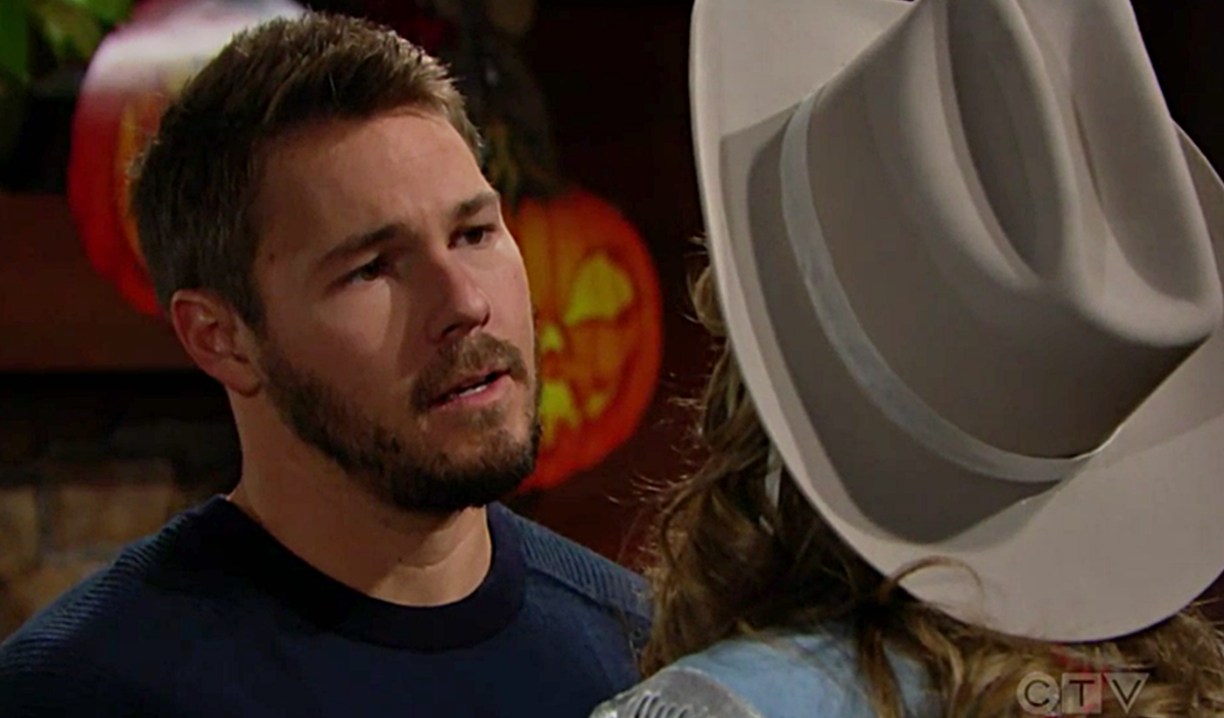 With no Katie, Bill and Will, or Sally, Wyatt and Flo this week, the canvas zeroed in on Hope wanting Douglas, and the related split between Ridge and Brooke. The Halloween party was a bit of fun though it felt like the kick-off to Hope’s plan wouldn’t lead anywhere good.

While I see both Ridge and Brooke’s point of view where Thomas is concerned, a bit of compromise would have solved their issues (but compromise isn’t soapy). Brooke could back off on Hope having to be Douglas’ legal guardian – it’s not her place to decide, and if she’s really concerned about the boy being around Thomas, perhaps another Forrester family member taking responsibility for Douglas would have sufficed. As for Ridge, he’s wrong not to insist on Thomas getting anger management therapy at the very least given how he berated Douglas. It’s insane to just ignore that and the fact that he may have run Emma off the road while furious. If anything bad happens to anyone as a result of Hope’s attempt to manipulate Thomas, Ridge will share in the blame, and I certainly feel we’re building to a bad situation as Hope won’t be willing to follow through on Thomas’ indecent proposal (also is he really willing to give Douglas up for sex?). I understand Hope’s concern for Douglas, and I like her manipulating as it makes the character interesting, but keeping her plans a secret from Liam will likely backfire as he was already spending time with Steffy the first night she put her scheme in motion, so the writing’s on the wall.

#BoldandBeautiful I don’t think Hope has thought this through. If she thinks he’s crazy, messing with him is a very bad idea.

With Thomas wanting to put the Logans out of Forrester Creations and ‘take back’ the company as it were, someone should remind him his sister is co-CEO and Eric has two other sons, Rick and Thorne – it may not be as simple as he thinks. In the last Deconstructing B&B, Rick Forrester’s return was the most wanted by Soaps.com readers polled, though he was virtually tied with Deacon Sharpe. In any case, if Thomas gets his way at Forrester it would be a no-brainer for Rick to come back from overseas and throw his hat into the ring as the two have battled it out there in the past.

I’m enjoying the twist with Shauna vamping it up with Ridge while he’s estranged from Brooke. They definitely have chemistry together as evidenced by the passionate kiss Ridge planted on her. With Denise Richards re-signing with Bold and Beautiful I’m guessing we can expect to see this twosome getting together. Quinn pushing for it at the Halloween party was hilarious as she’ll be able to live vicariously through her best friend if they hook up, though I’d be remiss in not making note of Shauna’s rapid re-acceptance into the fold after keeping the baby secret. If the kidney transplant didn’t get redemption for Flo it certainly did wonders for Shauna. Anyway, getting back to the party, the Halloween costumes were fun to see and incidentally, the Forrester mansion was the place where most Soaps.com readers polled wanted to attend a Halloween gathering.