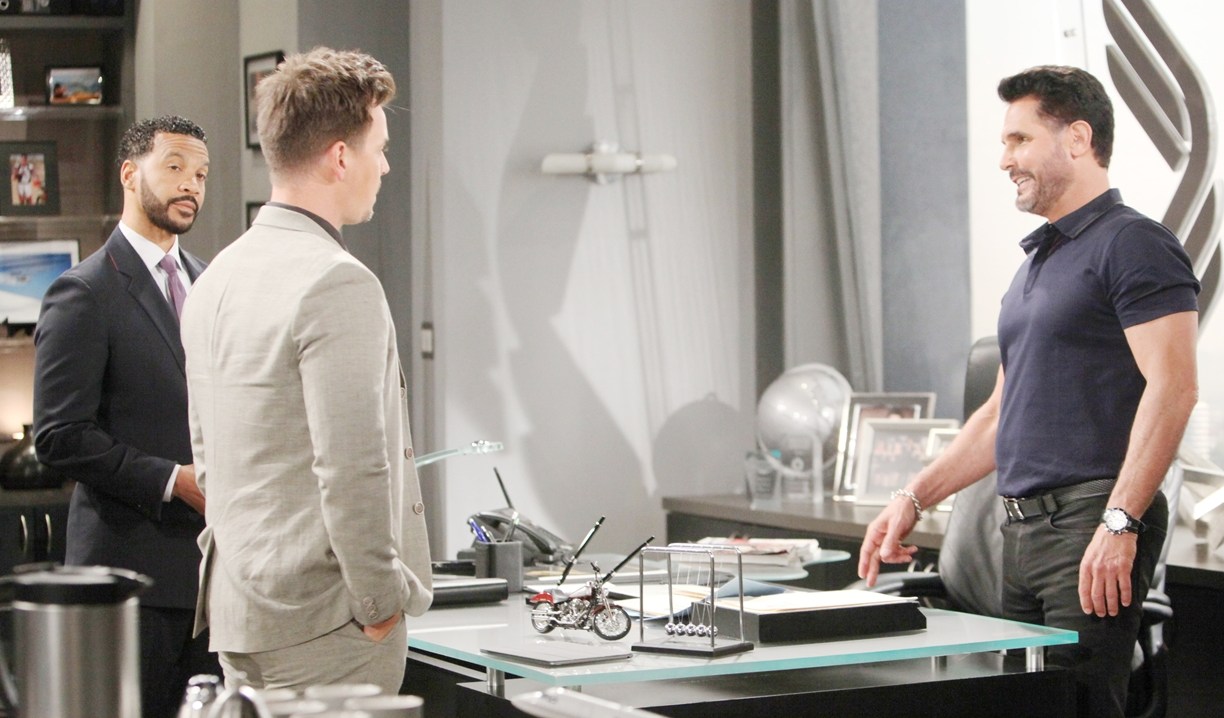 The Bold and the Beautiful’s focus continued to surround a single storyline, and while it’s a vast improvement from the mind-numbing weeks and months prior to the baby secret coming out, I still feel a real need to see an unrelated plot. That said, it has been fantastic to have other characters back onscreen and Thomas’ fall has provided some solid drama and even a few comedic moments.

The controversy surrounding Thomas’ fall is classic Bold and Beautiful; designed to have viewers arguing sides. There really shouldn’t be much question about Brooke’s actions. As a mother, you’re going to intervene in a situation where a man is holding your daughter by the arms on the side of a cliff, particularly when you know him to be obsessive to the extreme and possibly responsible for the death of another young woman. One would not stop to assess the situation or take a moment to ask what’s going on as Ridge so inanely suggested but would act instinctively. I just eye-rolled at the powers that be having Hope jump in to say she wasn’t afraid and didn’t feel threatened, when just moments before, she had screamed at Thomas to let go of her and then fled from him – this, along with Thomas’ account could lead to Brooke’s arrest. Meanwhile, for some reason, everyone knew Brooke would never harm Ridge’s son intentionally except for Ridge, who, in shock or not, acted like a boob, and took no responsibility for the role his denial played in all of this coming to pass. I hope Brooke leaves him if he implies again that she did it on purpose…there’s a really good-looking new doctor in town who might be single – it’s awesome to have Vincent Irizarry on Bold and Beautiful. Anyway, the post-fall drama’s been entertaining, what with Liam’s hospital snark, Katherine Kelly Lang’s Brooke running a gamut of emotions with just her expressions and a few lines, and Hope’s bedside tongue-lashing. I was missing Steffy and Taylor, though, who should also have been a part of this drama. There was plenty to pick at too. Though it was understandable for Ridge to be upset about Liam ranting at his unconscious son, in fairness, he did it when Bill was hospitalized. Also, Ridge called out Liam’s waffling, but hey, he’s the original waffler. Granted, Liam’s worse. Fans remarked on other points:

Ridge schemed to hide Douglas’s paternity but he can’t fathom that Thomas did it with Beth’s #BoldandBeautiful pic.twitter.com/V19Hqogjr0

I’m not liking how Hope is trying to console her mother for “misreading” the Thomas situation and making a mistake. She sounds like she already forgave Thomas. Seriously?I’m surprised Hope didn’t push Thomas herself after the hell he put her through. #BoldandBeautiful @BandB_CBS pic.twitter.com/pCqw7ZBMwW

In the last Deconstructing B&B, it was satisfying to see liars pay and while it’s nice to see Flo stuck behind bars, I don’t anticipate her being there for long. Detective Sanchez will likely give her a deal if she helps bust the underground criminals who provided the fake documents, as hinted during his visit, and with her determined to see Thomas pay, I could easily envision her getting back into the Logan sisters’ good graces by helping to incriminate him in Emma’s death, which would then help Brooke establish a defense for her actions on the cliff if she’s arrested. Blargh, I just wanted Flo to go away. As for Shauna, this material has given Denise Richards a chance to show her chops even if her wheedling for help from Quinn was a bit grating. I was glad Quinn turned her down, and I’m especially glad the narrative that Flo is a victim isn’t flying with anyone, but I could see Quinn changing her mind, which would cause tension in Quinn and Eric’s marriage. I’m all for shifts in focus. Speaking of shifts, it looks like Wyatt’s switched back to Sally, and I was drawn in by their chemistry as before. I laughed as even Quinn knew her argument that Sally wasn’t trustworthy was lame.

The comedic beats played at Spencer Publications courtesy of Bill contrasted nicely with the melodrama going on at the hospital. I laughed out loud when Bill learned of Thomas’ fall and hopefully asked, “Is he dead?” So Bill. It was also enjoyable to hear his unleashed rant about Flo with Wyatt in the room, and to hear Justin says Thomas will wish he had died if it’s proven he caused Emma’s death. I’d like to see that remark followed up!