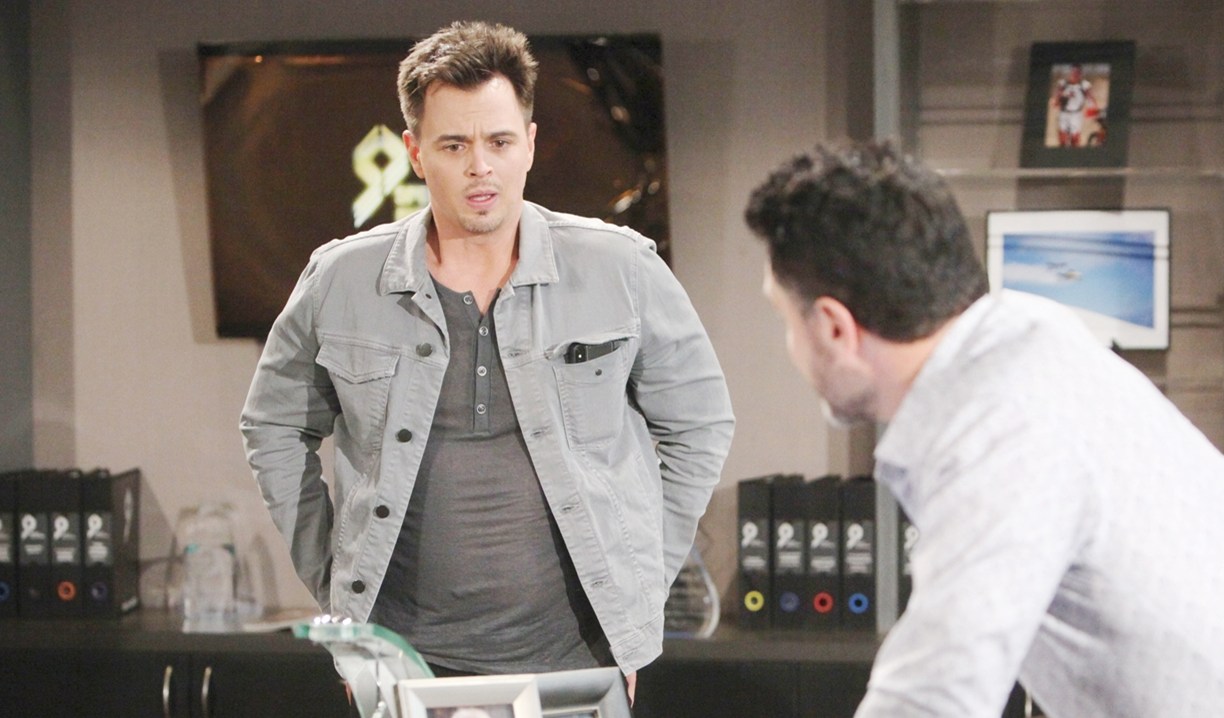 The Bold and the Beautiful largely focused on Flo and Shauna this week, as we didn’t see Thomas and Douglas, and the Katie and Bill romance took a backseat. In the last Deconstructing B&B, storyline foreshadowing felt dumbed-down, so as unbelievable as it is that Flo’s father turned out to be someone attached to Hope, at least it was made to feel like a twist by using Bill as a red herring…though that was also far-fetched. Thoughts:

Bill hooting, “Bill Spencer, you are not the dad!” made me laugh, as did the expressions on Wyatt’s face when he was thinking Flo might be his sister. Quinn pressing to find out if they had sex on prom night amid the drama was hilarious too. All-in-all the scenes in Bill’s office were entertaining…and the reveal of Storm Logan being Flo’s father, although a cool twist in one respect, may also have been one coincidence too many for some. I was rolling my eyes at Donna, Brooke and Katie just happening to have a huge session remembering ‘Stormy’ at the exact same time the reveal was happening at Spencer Publications (though I loved the flashbacks), and at Katie’s speech about the Logan women looking out for one another, which will probably translate to Flo getting away with the baby switch (though I can’t see Brooke easily forgiving this even if she is Storm’s daughter), but first, they’re going to think Phoebe is Storm’s granddaughter, which is a whole other mess. Fans reacted to the storyline:

To rewrite Quinn/Wyatt’s history, suggest a THIRD woman would keep a kid from Bill, tease a brother/sister romance, have way too many clichés/coincidences, have Bill wait 6 years to make Quinn sign papers, make Shauna be clueless that Bill is Wyatt’s dad…mess#BoldandBeautiful

Ha! Once Brooke finds out that Steffy has “Storm’s” grandchild. Brooke: “but she’s my great niece” #BoldandBeautiful

A chance of romance

The plan Will set in motion kept rolling forward this week as Bill asked Katie out on a date and she accepted. While it lacks excitement, it’s sweet and the chemistry is there. I’m not opposed to them reconciling, though I don’t see it lasting or ending well. In other romance related commentary, Flo kissed Wyatt and admitted she was still in love with him…well, duh. Not at all a surprise, and judging by his excitement about her paternity, he still cares a lot for her as well. Once the reveal of Flo being a Logan kicks in, we’ll probably have Brooke, Donna, and Katie joining Quinn’s crusade to reunite her with her high school sweetheart, which could spell misery for Sally.

While I still blame Flo more, Zoe has little rooting value left after being thrust into this baby switch storyline and inexplicably campaigning to keep the truth from Hope while pressuring her to try and have another baby – like that would make it better. Zoe taking off to London on her own and cryptically asking Xander to report in if Hope suddenly takes off for Paris is such weird behavior that Xander should be sniffing around to find out what’s afoot.