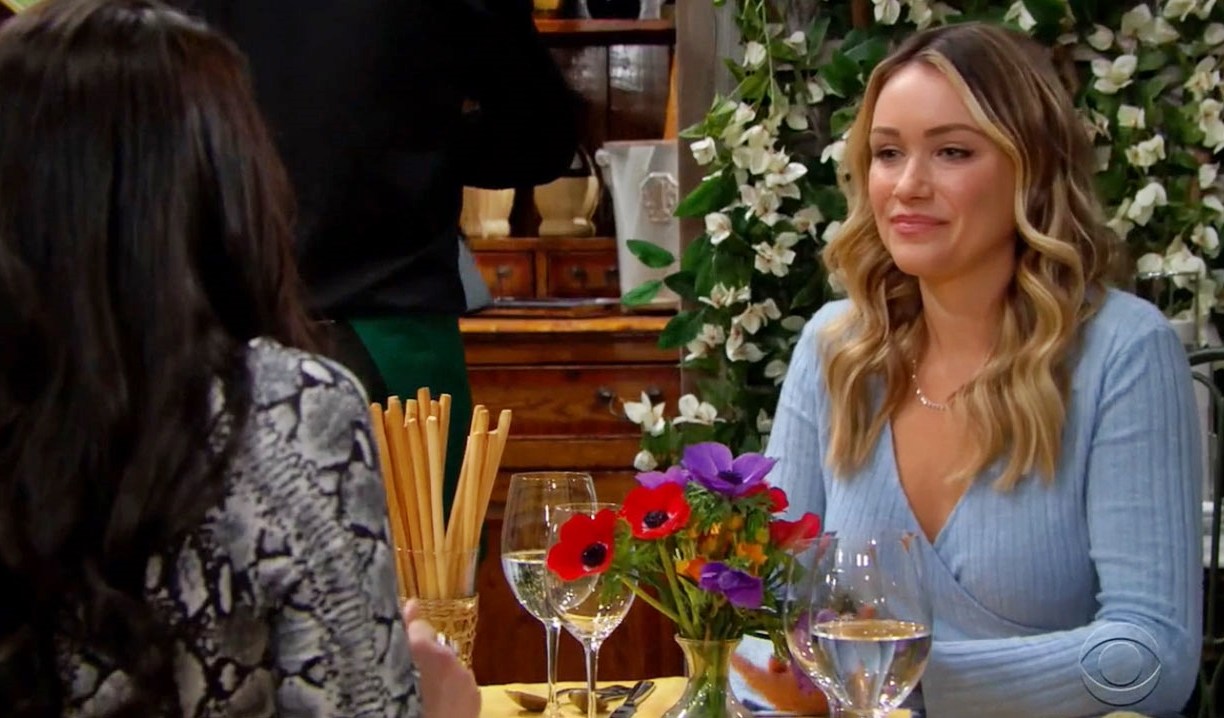 The Bold and the Beautiful swerved away from the baby storyline toward Quinn’s reinvolvement in Wyatt’s love life, Thomas and Douglas’ return (with Brooke and Taylor butting heads), and the decision to keep Sally at Forrester Creations, which put the kibosh on a new fashion house, and has other possible ramifications. Thoughts:

In the last Deconstructing B&B, Steffy left for Paris putting the baby storyline on hold, which left Flo to make her way around town seemingly unencumbered by guilt as she visited Wyatt at work and reconnected with Quinn. The makings of a Wyatt/Flo/Sally triangle were evident as Quinn clearly wants Wyatt and Flo together, meaning she will manipulate and meddle until something gives. Seems fun, but also kind of ‘been there done that a million times’ for Bold and Beautiful. Another storyline avenue was also opened up with Quinn asking Flo about her father. Flo’s mother won’t talk about him, so clearly doesn’t want her daughter to know who he is, but with Quinn pushing Flo to find out…obviously that’s what is going to happen and it will be someone we know. Factor in Flo and Quinn’s joking about Wyatt’s father turning out to be a billionaire and how that would never happen again in a million years, and unless that was a red herring, it’s a good guess it’s one of the rich men in town. What if it turned out to be Eric? Quinn will be wishing she’d kept her mouth shut. Other possibilities are Ridge, Thorne, or even Deacon Sharpe, not because he’s wealthy, but because it would make Hope and Flo sisters. Hopefully, it’s not Bill because Flo and Wyatt were an item, so that revelation would be truly awful unless it led to Quinn being forced to admit that Bill isn’t Wyatt’s father after all…which would be another terrible can of worms to open. Vote in Soaps.com’s poll on Flo’s father below. Fans weighed in:

My hunch is that Deacon Sharpe could be Flo's long lost father. I'd love to see the reaction on Quinn's face if that was to be revealed. 😮🤔 #BoldandBeautiful #BoldandtheBeautiful

Sally decided to stay at Forrester Creations when Ridge made her an offer she couldn’t refuse, and I was happy for her, while still feeling a little disappointed there will be no rival fashion house. Presumably, Thomas will go back to work at FC as well, and with him having mentioned to Hope that he would have reached out to Sally had it not been for Wyatt, and the revelation that he and Caroline weren’t lovers, another love triangle possibility rears its head with Thomas/Sally/Hope, as clearly the bonding of Hope and Douglas is leading somewhere. Taylor’s take on it has all the subtlety of an anvil, and despite Brooke’s outrage, Hope’s desire to mother Douglas may make Thomas start looking good to her. Taylor kissing Ridge led to a fun payoff in her scenes with Brooke, but her insistence that their children should swap partners around seems a tad much for a psychiatrist.

Katie supported Bill in the aftermath of Caroline’s death and began seeing him as the man she fell in love with again. A sure sign in Bold and the Beautiful language that she’s not opposed to getting back together. They both seemed to be amused by someone setting them up as well, and certainly enjoyed themselves, so it appears their reunion is imminent.