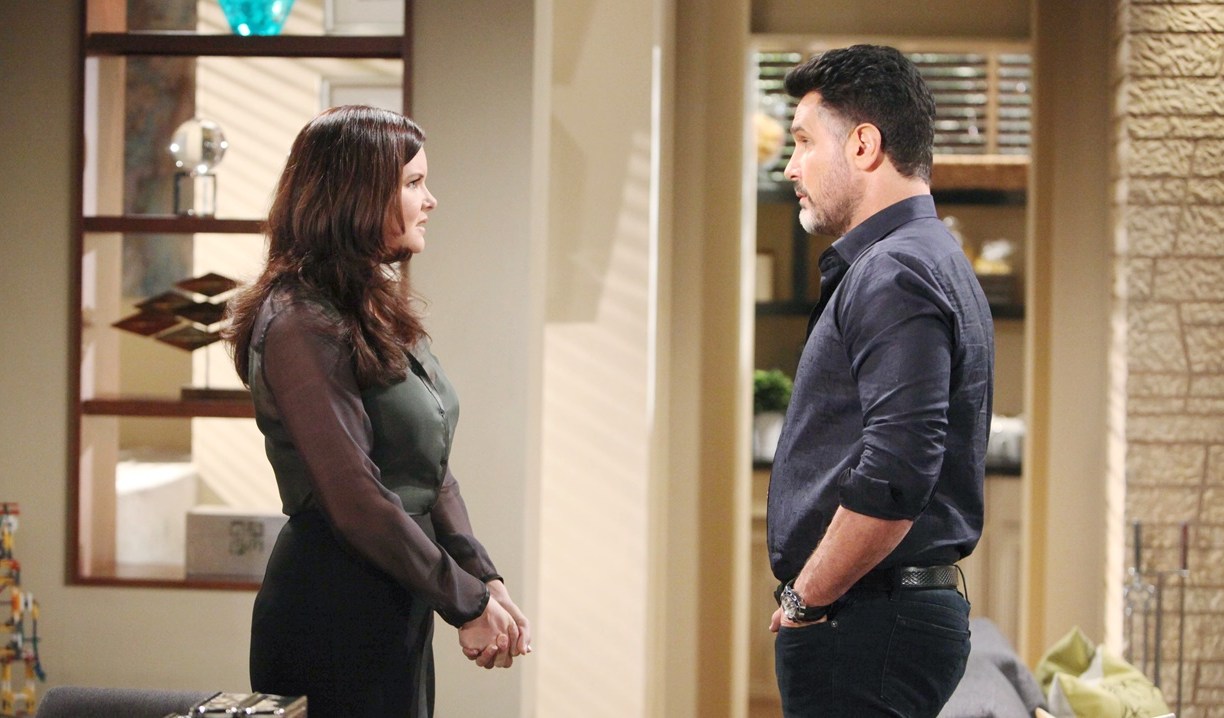 The Bold and the Beautiful still had a heavy focus on Hope pushing Liam toward Steffy much of the week, but, happily, there was also a couple of storylines connected to Bill as he struck a deal with Wyatt and spent time with his ex-wife – we even saw Eric and Quinn. Thoughts:

Even on a soap the idea of a wife giving away her husband to her rival is a stretch, especially one as hard fought for as Liam, and yet when Hope was becoming near-hysterical with choked sobs as she insisted Liam needed to be with Steffy and the girls, I was feeling it. At the same time, I could see what Steffy and Liam were seeing; that Hope was unhinged with grief and guilt. All credit to Annika Noelle on her performance and to Scott Clifton and Jacqueline Wood for their reactions, which sold this material against all odds. In the end, Liam was able to dissuade Hope from her plan, but as we all know, that isn’t necessarily the end of it. Whether Liam stays with Hope or goes back to Steffy, with Jacqueline MacInnes Wood on maternity leave we’re bound to get a respite from the dreaded triangle for a little while – it just remains to be seen how Brad Bell will handle her absence. As for Zoe running into Flo at Bikini Bar – hurray for any development that brings us closer to the truth coming out, for everyone’s sake, though it makes no sense to me why Flo would have stayed in town. Ultimately, it’s quite likely the baby reveal will be stalled due to Wood’s leave, as Steffy is integral to the story.

More: Casting shake-ups for B&B and all soaps

The last Deconstructing B&B was cautiously optimistic about Spectra Fashions’ revival but Wyatt and Sally handing in their resignations at Forrester Creations made it a little more of a nail-biter as to whether Bill would follow through on his promises. While he seemed to be full of the best intentions on this deal…well, he’s Bill. In the end, he threw us all for a loop by announcing he would not fund Spectra Fashions, but it turned out he just wanted the business to bear his name – a very ‘Bill’ version of a compromise. Too funny! Before that, he made a beeline over to Katie’s to tell her about his reconciliation and deal with Wyatt, noting that she was the only one who would care, which indicates he’s no longer focused on impressing Brooke. So, should Katie and Bill get back together as Will, Justin, and Donna are pushing for? Soaps.com readers polled were pretty evenly split between ‘yes’ and ‘no’ with a slight edge to those hoping for a reunion, and another handful willing to embrace it for Will’s sake. While I was feeling ‘over’ the idea initially, it was surprising to be reminded of the chemistry Bill and Katie share, even just holding a conversation. That said, I’m not getting the usual intense ‘hit on the head with a hammer’ vibe when a B&B reconciliation is a sure thing, as both characters have been somewhat restrained when others hint about it. It does seem likely to happen, but maybe with complicating factors. Fans weighed in on the possibility:

Bill is sexy as hell BUT you can’t trust him! Katie just get some and send him home! #BoldandBeautiful

Bill was definitely his best self with Katie #BoldandBeautiful

I hope if the writers do put Katie & Bill back together & there’s cheating I hope Katie will be the one to cheat. Let Bill see how it feels. I’m shipping Batie because they have that effect on me but I haven’t forgotten how he brought others into their marriage #BoldandBeautiful