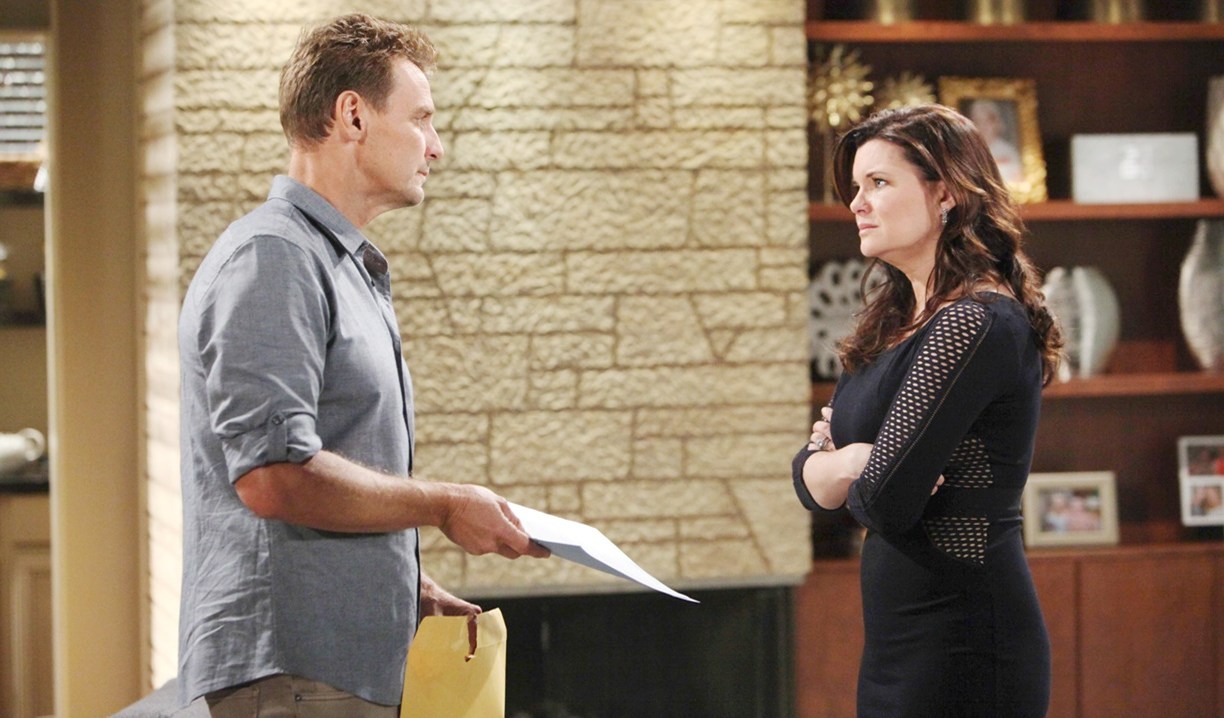 It was much-appreciated to have some new developments on Bold and the Beautiful that brought a bit of drama given how low-key the past few weeks have been filling in time as we await the truth about the baby coming out. Thoughts:

Even knowing that Ingo Rademacher chose to end his contract with Bold and the Beautiful and is returning to General Hospital, and Brad Bell had to pen a hasty exit for Thorne, didn’t make me feel any better about the lame duck excuse he used as a reason to leave Katie. If we’d seen some more in the way of lead up, such as Katie being drawn to Bill and pulling away from Thorne, they could have had a fight over it, decided to go their separate ways, and it would have felt plausible given how quickly they got married. Having Thorne announce out-of-the-blue he was leaving because it was best for Katie and Will and that he suddenly had to deal with the loss of Darla and Aly (he’d already had a relationship with Taylor since then) was unrealistic. He also produced the ridiculous, magical Bold and Beautiful annulment papers (because no one ever has to get an actual divorce on this show)…and on Valentine’s Day no less! It was all so dumb I didn’t get any ‘feels’ from it, even when Katie teared up, which always gets me. Viewers weighed in:

Thorne wins the prize for lamest breakup in the history of soaps. #BoldandBeautiful

In the last Deconstructing B&B, I looked forward to Zoe uncovering the truth, and she sure got it out of Florence in a hurry. Again, this stretched the bounds of believability, especially given how certain Zoe became right away that Florence was lying, when Carter, Taylor, nor Steffy questioned her claim she had just given birth. That said, Zoe is our means to an end, so we’ll buy that she got Flo to crack and spill all. A shocked Zoe then confronted Reese by phone, and frustratingly, agreed to wait for him to fly over from London before doing anything. Zoe’s in quite a stew given that if she comes clean to Steffy and Hope, the authorities will go after her father. Also, he and Flo will be desperate to keep her quiet. Either way, it’s not going to be as simple as Zoe dropping by Steffy’s to break the bad news. I expect something will happen to Zoe or she’ll be convinced to stay quiet. But let’s not forget she’s told Xander some of what she knows already, so if someone else becomes suspicious, it will only take a conversation with him to spur things along. In any case, it was nice to have a breakthrough even if it doesn’t immediately result in everyone learning the truth, and Zoe’s shock and horror was tangible thanks to Kiara Barnes.