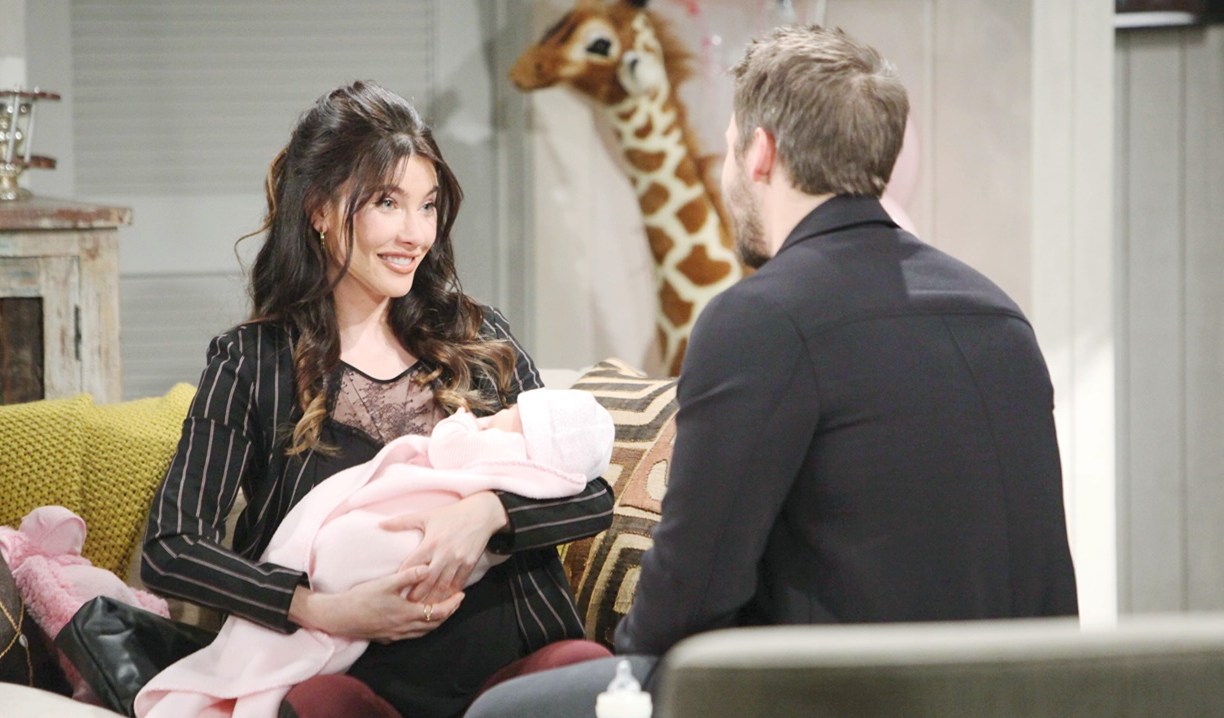 Well, having the focus on one predictable storyline proved to be about as interesting as it sounds. There were a few appreciable emotional moments, but it’s notable that I felt pathetically grateful for the Eric, Quinn, Maya, and Pam scenes at Forrester Creations, just because it involved seeing different characters. I was not, however, desperate enough to want to see Tiffany and Emma practicing a routine. Thoughts:

In the last Deconstructing B&B, Reese’s scheme caused agony, as viewers just wanted the baby back where she belonged. I’m still on board with not prolonging the agony, but it’s more about our suffering than Steffy and Hope’s. Don’t get me wrong; watching the melodrama of the reveal that the baby is Beth will be heart-wrenching – and no one does those things better than B&B – but unless there’s some huge unforeseen twist coming, at this point we’re just putting in time watching all the scenes that get us to the inevitable outcome. Sure, there have been some solid emotional moments, but everyone being super nice about everything is a little surreal and robbing us of drama along the way. Hope was way more upset about Sally’s puppy than the adoption…she even sent Liam over to help Steffy out. At least they had Ridge being skeptical about the adoption for five minutes to mix things up a little. Getting back to Hope, obviously it was necessary for her to be somewhat on board with the adoption so she’d end up over at the cliff house holding her baby for the first time – and that was one of the emotional moments that resonated, as it was when Liam first held her. Fans weighed in on Liam’s decision to go to Steffy’s after Hope urged him to:

I didn't watch to today..but from what I've read ..Liam is an insensitive, opportunistic weasel! Just because Hope said go didn't mean he should have! Liam is on to the next shining new thing.. why would anyone want him with their fav??? #BoldandBeautiful

I don't even like Hope but Liam is an idiot. Just because she tells you to do something doesn't mean she is actually okay with it he is dense. He should have stayed at home with his wife. #boldandbeautiful

‘Reese and the thugs’ is another branch of the storyline that has played out. It’s laughable he’d be able to intimidate these guys the way he has, but it is what it is. Reese is all over the place – one minute he’s kissing Taylor, the next he’s kissing Florence. Then he’s depicted as genuinely upset about what transpired with Beth, and sincerely distressed about putting his daughter’s life in danger, but he’s still gambling. I’m guessing since he can’t stop putting her at risk, he’ll want Zoe to move, and there will be some conflict there. Anyway, while we may love to hate him, it’s not been possible to connect with the character; he’s merely serving a purpose in the plot. As for Zoe, her former badass self wouldn’t have dreamed of singing and dancing with Tiffany and Emma; Brad Bell has done away with the rough edges that made her so intriguing.