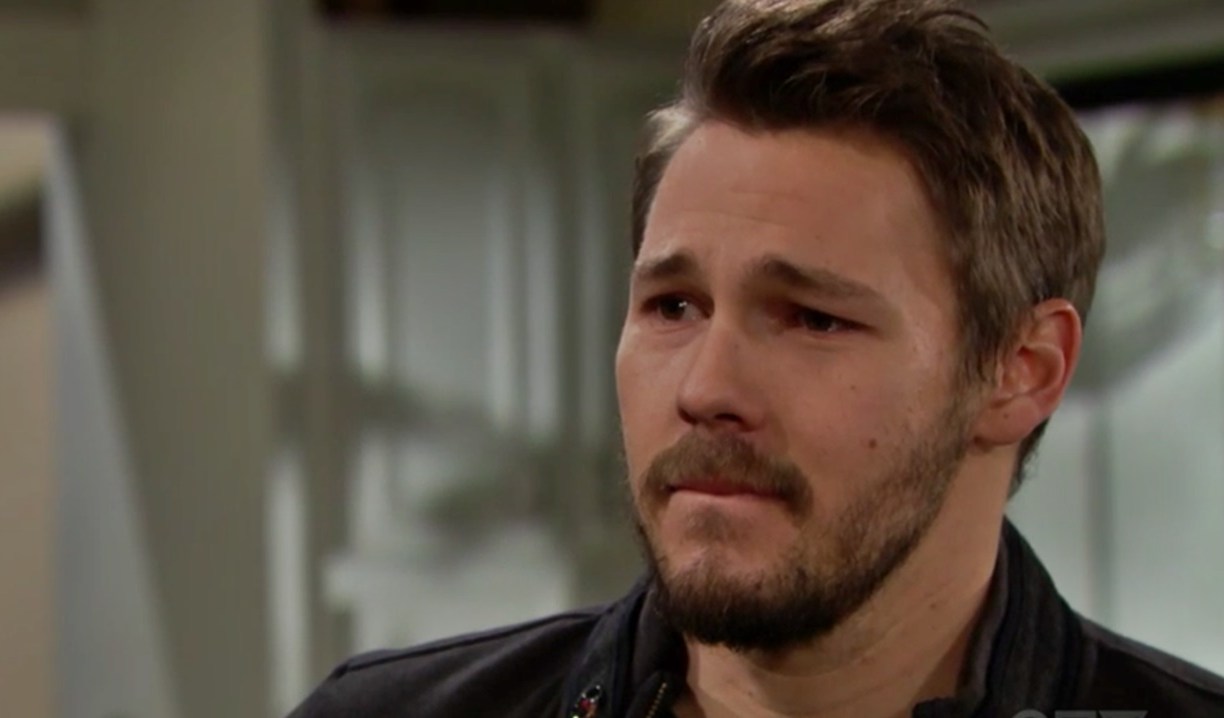 This week B&B was a combination of navigating the ongoing sadness at Hope and Liam’s cabin and bracing ourselves for Steffy to adopt what is presumably Hope and Liam’s baby, as the adoption storyline inched forward. I was thankful for the comic relief with Will and Bill. Thoughts:

In the last Deconstructing B&B, Hope’s raw grief made Beth’s death seem real and while that continued, she seemed to also embark on a new stage of grief – anger. After spending a few minutes with Wyatt, in which they, appreciably, acknowledged the loss of their baby, Hope adjourned to the bedroom, which is where Sally found her when she took in the puppy she’d brought to help distract her. Hope, of course, was appalled and scolded Sally with eye-opening ferocity. While I cringed for poor Sally, who had the best of intentions but should have waited a good month longer, again, I was impressed by the raw and realistic reaction from Annika Noelle as Hope. I can’t imagine how she’ll respond when Liam announces Steffy’s adopting a baby.

That brings us to what I think of as the ‘dumbed down’ adoption storyline, as Steffy instantly began wanting to adopt the week before Hope lost her baby. While the presence of Florence helps explain Taylor not entertaining any suspicions about Reese and the baby in his apartment, it’s still a stretch given that he just told Hope her baby died and now he coincidentally has a newborn in his place. Taylor, of course, has no reason to doubt him or Florence, it’s just the timing. Steffy, meanwhile, when presented with the adoption opportunity, decided she wouldn’t pursue it unless Liam gave the thumbs up. Under the circumstances, I feel like he would have said it wasn’t a great idea, but of course he approved, and even agreed to go with her to meet the baby, thus he’ll end up holding Beth and not even realizing it. Then we’ll presumably have the awkwardness of Liam interacting with Steffy, Kelly, and the baby, while Hope grows resentful. All I know is it’s going to be a tough go for the viewers knowing all we know and having to see it all play out – it’s already like watching a train wreck in slow motion. Fans had some predictions:

#BoldandBeautiful I have a feeling Hope’s grief will turn into bitterness endangering her marriage.

Hope can FEEL Beth. She’ll figure it out. #BoldandBeautiful

I thoroughly enjoyed the scenes with Will and Bill at Spencer Publications, as Bill’s son seems like his ‘mini-me’ but has a gentle side that brings out the best in his father. The origami money bit was cute, and I laughed out loud when, back at the house, Will announced he and Bill had had a great afternoon discussing money and women. Adorable! Katie seemed to think so too, and there’s every reason to think that with Ingo Rademacher leaving as Thorne, Brad Bell will give Will his wish and reunite Katie and Bill…at least for now, as Bell’s focus seems to have swerved from the Bill/Brooke/Ridge stuff to the flavors of the month; Wayne Brady and the baby adoption. Do you want to see Katie and Bill back together? Vote below.