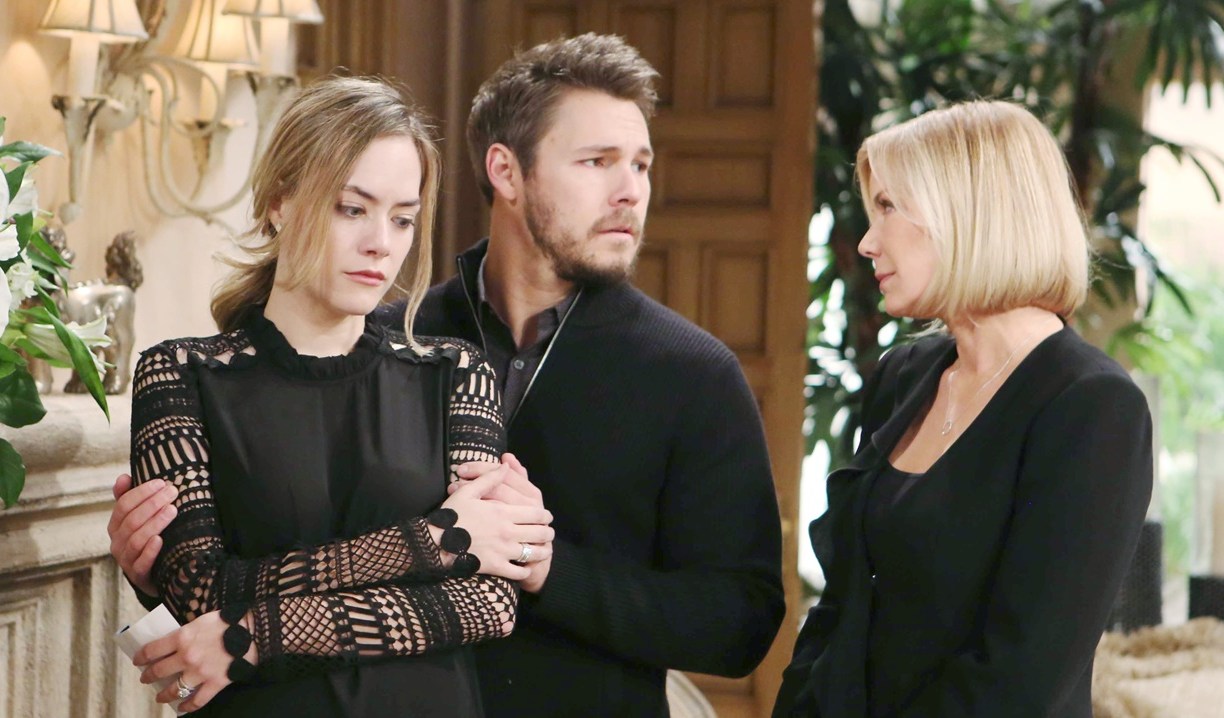 It was a sad week on B&B, devoted mainly to Hope and Liam’s difficult arrival at home and starting to process their loss, but with a lot of heartfelt moments. Thoughts:

In the last Deconstructing B&B, the 8000th episode brought classic drama with Hope and Liam’s baby, Beth, dying. The couple and their loved ones gathered to mourn the baby girl, and it was awesome to see all the family members come together. I can’t say enough how believable Annika Noelle has been as Hope – she behaved exactly as an exhausted, post-pregnancy hormone flooded, grieving young mother would, from attempts at stoicism to the frequent outbursts of tears. While some would disagree, I’ve always been a fan of characters setting differences aside during extenuating circumstances such as these, so the Ridge/Bill, Steffy/Hope, and Brooke/Taylor moments were my favorites. That said, I still found it weird that this went down in Quinn’s home, with Quinn there, and once again it was entirely ignored that Hope blamed her for the loss of her first baby. Anyway, it was notable that Taylor gave Hope information on a support group, which is the logical place for her to cross paths with the other young woman who was in the clinic on Catalina Island that night. Presumably, one of those babies Reese said died that night, actually lived, and will be the baby Steffy will adopt and later have to give up…because emotional drama must ensue.

After the memorial, Taylor went to support Reese, who also put on a pretty believable display of emotion as he admitted he’d been profoundly affected by the loss of Hope and Liam’s baby. Of course, it seemed he was straight up acting and shedding crocodile tears to win Taylor’s sympathies, as he was fine before she arrived. It still made me wonder though, if there was a chance he was being real about Hope’s baby, and it was actually the other young woman’s baby he kept and lied about. An overwhelming majority of Soaps.com readers polled felt that Dr. Buckingham was lying about Beth’s death, and with Hope having said a few times she still feels Beth isn’t gone, that’s likely the case. On Friday, as predicted, Reese revealed he indeed had a baby in his house. Fans weighed in on Dr. Buckingham:

If Reese is struggling about what happened on Catalina Island, it is because he hasn't figured out how soon he will be able to get his hands on $200,000. #BoldandBeautiful

#BoldandBeautiful Sometimes when I hear Reese talk about Beth I find it difficult to believe he took her but sometimes I’m naive. I just don’t know.