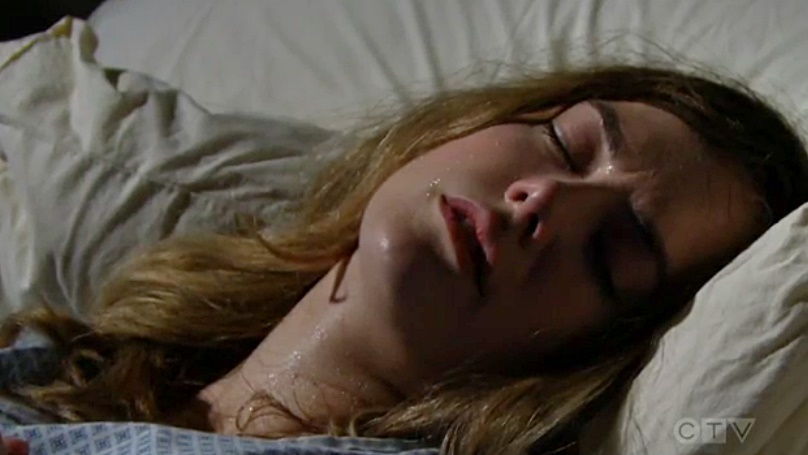 It was a short week due to the New Year’s Eve and New Year’s Day pre-emptions, though not short on drama, as the tension built surrounding Hope’s labor, and culminated on B&B’s 8000th episode with heartbreaking scenes. Thoughts:

In the last Deconstructing B&B, Hope’s solo travel cued speculation that something bad would happen, and of course she went into labor and Liam was unable to get there when expected due to the storm. His wait at the airport involved the annoying-after-one-episode duo of Matt and Kieran hovering while he reached out to his father for help. Bill, hanging with Wyatt and exchanging some entertaining one-liners, was eager for the opportunity to prove himself not only to his sons, but to Brooke, and he wasted no time making a beeline for Forrester Creations to update her. Given the circumstances, Ridge tolerated him, and they even managed to agree on the need for Brooke to stay positive. Loved these interactions.

On the island, in typical soap fashion, everything aligned to set the scene for something shady to go down as Dr. Reese Buckingham was the only staff member at the clinic on Catalina, a young woman already at the clinic appeared to have had a stillborn baby then conveniently left, heading out into the storm alone, the power went out, and Hope had a medical crisis that caused her, also rather conveniently, to pass out. With Reese increasingly desperate to find a way to pay off the goon who was sending him texted threats about Zoe, many were speculating that a scheme involving the unconscious Hope’s baby would develop…because of course, Steffy suddenly wants to adopt a baby sister for Kelly, and Reese knows Taylor has the means to pay for it. As soapy as it is for a character to be told her baby has died, and another to unwittingly start raising that same baby, there was definitely a collective cringe from the audience as they’ve waited to find out if this would in fact happen, and you have to give it to Brad Bell, it’s caused a load of controversy, which keeps fans engaged, enraged, or what have you. As it turned out, Hope was told her baby had died, but the audience was left not knowing if Beth actually died, or if Buckingham lied. Quite a cliffhanger! As for the scenes themselves, Annika Noelle, on the heels of her realistic laboring, broke my heart as Hope sobbed over that bundle; an absolutely heart-wrenching performance. Fans reacted:

Wow Hope is blowing me away here!!! #AnnikaNoelle you’re amazing! My heart goes out to her! #Bold8000 #BoldandBeautiful

I’m not even a Hope fan, and I’m crying my eyes out. Congrats on an incredible performance today Annika! I know so many women watching that today can relate. Your Emmy reel next year is going to be so rad. 🙏🏻 #BoldandBeautiful