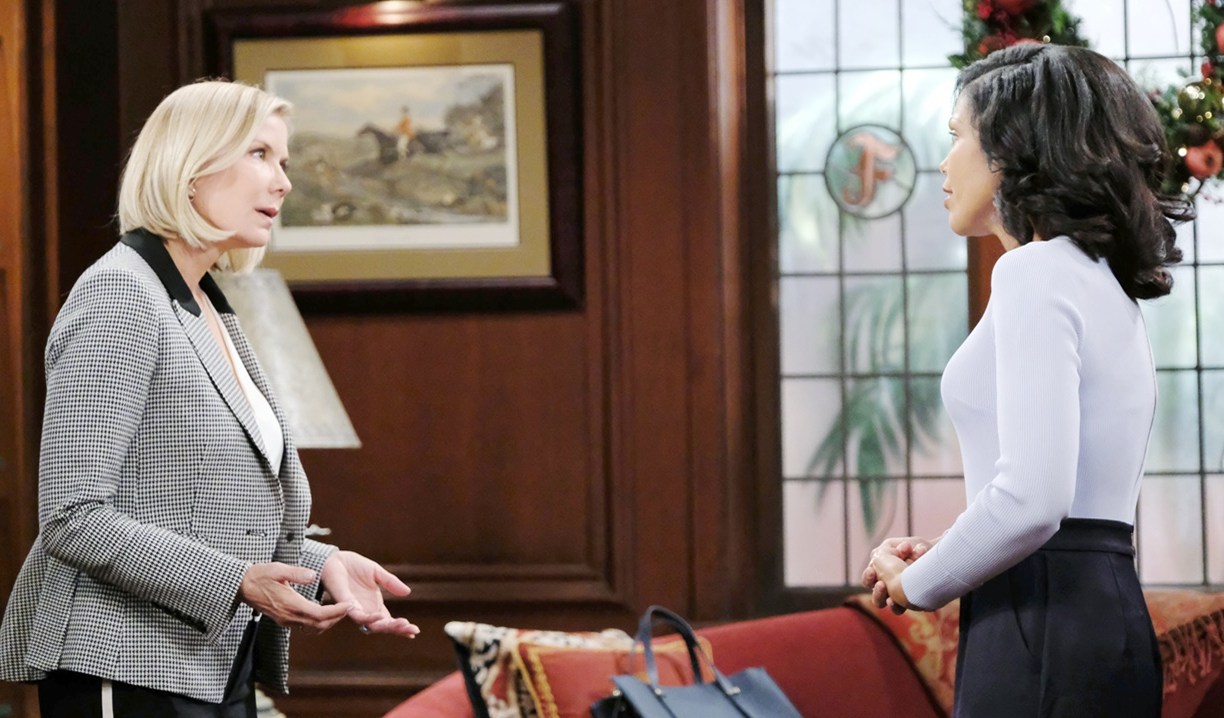 The debate about Taylor’s fitness to be around Kelly still wasn’t settled, and Maya’s news had jaws dropping…and not in a good way. Thoughts:

In the last Deconstructing B&B, the week was devoted to repetitive arguments debating whether or not it was safe to let Taylor be alone with Kelly, and this week brought more of the same. Even those who had an opinion on this in the beginning are probably past caring what happens and just want to move on. I get frustrated with this aspect of B&B as it feels dumbed down, and is taken to the point of ridiculous to keep it going. The most satisfying part thus far was Liam pointing out that Ridge was responsible for Bill going over the balcony and no one was questioning whether he’d lose it again. That’s the irony – most of the characters have something(s) in their history that would fit the current criteria for being ‘banned’ – pretty sure most have ‘snapped’ at some point or battled alcohol addictions etc. In related commentary, Reese encouraged the embattled Taylor to lean on him, but he is so over-the-top that it’s hard to believe a psychiatrist wouldn’t sense that something’s seriously off. I guess we have to write it off to her being especially vulnerable right now. Aside from his desperation, they’d make a cute couple, but I don’t see it ending well.

Speaking of cute, Sally and Wyatt are fun to watch as they tease one another, discuss work, and express their love, but I’m hoping they’ll get involved in a meatier storyline soon. I’m interested to see if anything comes of Sally’s activewear idea, as it’s always good to have the fashion aspect kept going on the show so the characters have purpose.

Offscreen and just off

Maya returned from International with huge news – out of the blue, she and Rick have not only split up, but have already started divorce proceedings. It’s wild that the head writer would present this as a done deal offscreen, and at the very least would have been more realistic if characters had been hearing whispers about trouble overseas before now, but here we are. I’m not sure what they’ll do with Maya now beyond having her police Zoe and Xander…here’s hoping there’s a storyline in mind. Though glad to see Maya back, many fans were unhappy, saying they’d rather have seen Rick and Maya than the interns, and complained the break-up just didn’t make sense:

My problem with this is simply if Raya has broken up..RICK not Maya would be the one to tell the family, this makes. NO sense to me. #boldandbeautiful

So Rick and Maya went from being the most stable, loving couple on the show, to their marriage deteriorating in a span of a few months?! Yeah doesn’t make sense! #BoldandBeautiful pic.twitter.com/59y8UQEFcS

The blog represents my opinion. Please share your thoughts using the comment section. Wishing all Soaps.com readers a happy and safe holiday!

Björn Andrésen on His Tortured Relationship With Luchino Visconti’s ‘Death in Venice’: ‘That Son of a Bitch Sexualized Me’