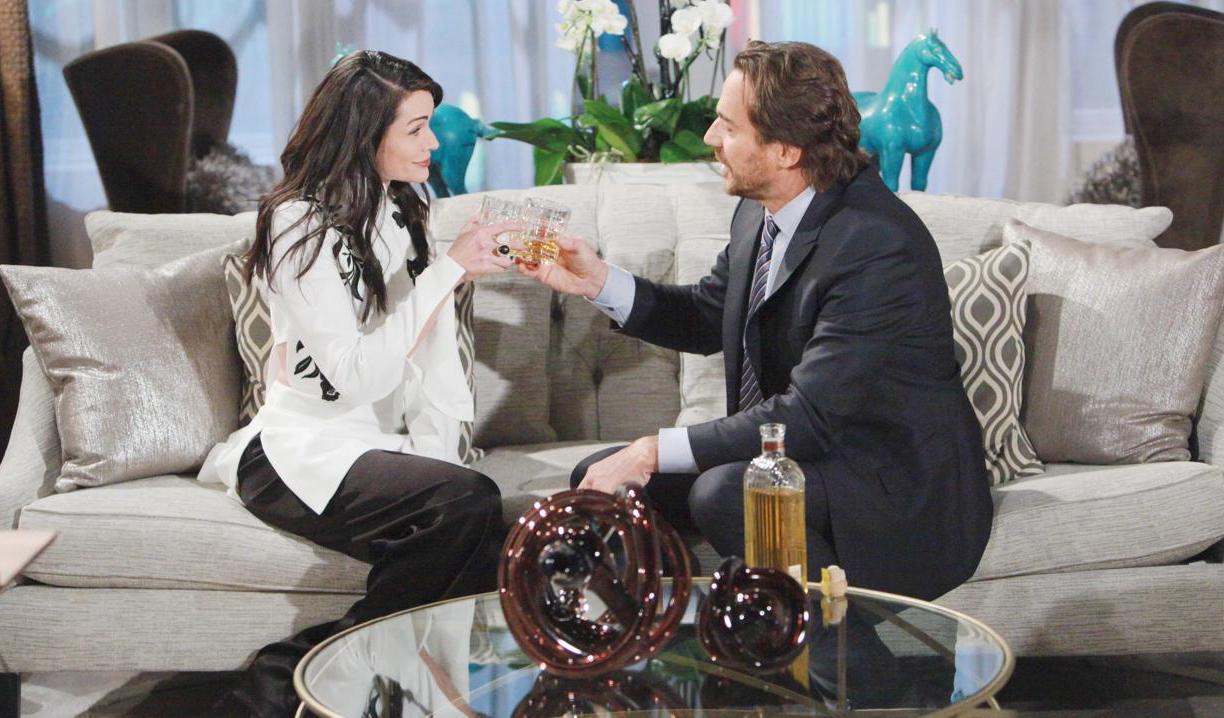 The Liam/Wyatt/Steffy triangle continued to be headache-inducing, though at least Steffy seemed to finally be portrayed as knowing exactly what she wants, which was a relief. Brooke took off to visit Hope, leaving Ridge free to execute his plan to get Quinn out of their lives, but the twists continued to come with that story. Thoughts:

Tequila and teardrops.
As noted in last week’s Deconstructing B&B, Wyatt’s behavior was infuriatingly desperate and it reached new lows, as he continued to press Steffy to salvage their marriage after she had not only reiterated that she planned to remain with Liam, but after she had also turned down all the hefty bribes thrown at her to persuade her to move back in with Wyatt at the Forrester mansion. Have an ounce of dignity, man! First of all, the bribery was downright creepy, and secondly, it’s weird and unrealistic that these three continue to exist in a vacuum, as though there would be no other people interested in them, or Wyatt wouldn’t at some point decide to seek out someone who’s never dated his brother. Argh. The writers truly need to move on from this…or at least focus on a triangle involving different characters if there must be triangles! Viewers commented on Twitter:

When Wyatt walks in on his "wife" kissing his brother and still fights for her is just..??Get some self respect & move on! #BoldandBeautiful

MIA.
It was amazing to see Thomas back on the canvas, now can we find the Avants? It feels like we’ve been operating in a bubble for the last while.

Related: B&B’s John McCook to cross over to Y&R

Unforeseen developments.
As is wont to happen in soaps, after gearing up for weeks to ‘get rid of Quinn for good’, Ridge was presented with the perfect opportunity as Brooke cleared out of town and Eric sent his son and his wife on an overnight business trip together. Made me laugh, and on a side note, if Eric doesn’t want to be involved in the company, why is he helping develop new lines and ordering people to attend symposiums that the CEO has no inkling about? Anyway, Bill got wind of Brooke’s plans and showed up in her kitchen to take his best shot. Unlike Wyatt, Bill doesn’t wheedle; his confidence can be sexy and persuasive, though the writing for this triangle is similarly lacking, with the same lines being recited repeatedly. In any case, Bill seemed to get Brooke thinking even though she turned him down. Meanwhile, Ridge put on a good show at Eric’s as he protested traveling with Quinn, when in fact, it played right into his scheme. He made a pit-stop at Forrester to brag to Liam about his ‘moth to a flame’ prowess with women (hehe!) before heading out with his nemesis. In San Francisco the psychological games continued and we began to get a hint of what the twist might be in this storyline as Ridge actually seemed to see Quinn as a human being when she spoke glowingly about Forrester. As the ‘overnighter’ commenced, viewers took to Twitter:

I don't know what he's more excited about,getting his hands on Quinn or the complimentary breakfast? #BoldandBeautiful pic.twitter.com/Sj5RjO7T8q

Ridge to Quinn: "Nothing bad's gonna happen. You're in control."
Yeah, like Quinn looks like she believes that. NOT! #BoldandBeautiful

Friday notes.
So instead of Ridge getting Quinn into a compromising position, a hotel employee threw a monkey wrench into the proceedings by inadvertently revealing that Ridge had changed the reservation. Oops! The claws came out when Quinn put two and two together, hehe. This was an unexpected wrinkle, and there may be more unforeseen outcomes for Ridge (and Quinn too!) as this plays out, which is keeping things interesting.