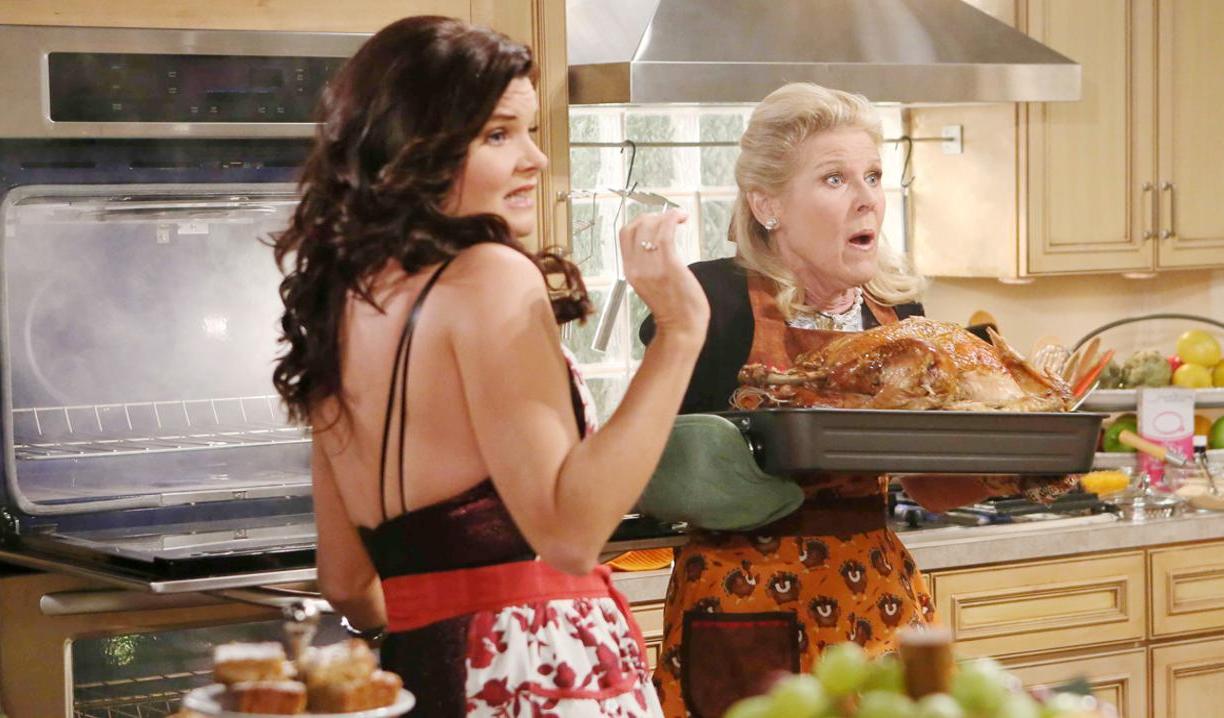 In the last Deconstructing “B&B,” we were anticipating a Katie and Quinn rivalry for the holiday, but surprisingly, things didn’t go that way. There were a few other unexpected occurrences this week as well – an out-of-the-blue proposal for one. Thoughts:

Twisted triangle.
While RJ’s bonding session with Bill went slightly better than expected, mostly thanks to Liam, Ridge failed to get the desired outcome when he proposed to the already engaged Brooke at Stephanie’s grave…with Stephanie’s ring. In other circumstances, this might have been breathtakingly romantic, but he’s putting out such a vibe of wanting to ‘win’, that it came across as emotionally manipulative. To even out the playing field with respect to controversial tactics, the writers revealed that Bill was tracking Brooke through her phone. Oy. This of course, led to a butting of heads graveside, while back at home, Brooke’s pushy teenage son was demanding that she ‘do the right thing’. Ugh. I don’t know; she keeps saying she’s in love with Bill, so if that’s true, why would she choose Ridge for the sake of their grown kid, or even to please the late Stephanie? Bottom line, the reasons for Brooke feeling ‘torn’ are a bit of a stretch.

#BoldandBeautiful Brooke and Ridge want to raise RJ together? Do they realize how old he is or do they just think he's tall for his age?

Great expectations.
So, Zende put his money where his mouth is and bought a big sparkler for Nicole. Not only is it kind of astounding that he thinks she should just get over the fact that he slept with her sister/nemesis again, but he needs to brush up on his proposal skills. Nothing like informing her that she will be his wife one day, hehe! Nicole turned him down, of course, but there’s little doubt among viewers that she will soon be talked around to accepting. Many are anticipating Sasha’s latest pregnancy announcement to come around the same time. Surely that wouldn’t happen again, right? Ha! Viewers weighed in on Zende’s efforts on Twitter:

Zende: It's all about forgiveness right *hints at Nicole*

Zende has to earn Nicole's trust back. In soaps opera time, give her until next Tuesday. #BoldandBeautiful

A beautiful day in the neighborhood.
The goings-on at the Forrester mansion pre-Thanksgiving were varied and relatively entertaining, with the exception of the rehash of Steffy and Wyatt’s doomed marriage when she cajoled him into accepting the dinner invite. She shouldn’t have married him on the rebound, and he shouldn’t have married another woman in love with his brother. Done. Over it. The big draw was the Katie/Quinn showdown ‘next door’, which featured Katie standing her ground in the face of Quinn’s declaration that she would not allow her to buy the house. Intense! In a weird twist, Katie uttered the right words to cause Quinn to glaze-over and have an epiphany that ended in her thanking Katie and hugging her. Katie’s stunned expression said it all. Meanwhile, Steffy made amends with Eric, and a truce was established between her and Quinn. It speaks volumes that Steffy wasn’t able to do this when her marriage to Wyatt was on the line. Anyway, the all-important Thanksgiving seating plan was set, with only a smidge of tension arising between Pam and Quinn over the controversial lemon bars. Hehe. On a side note, it was disappointing to hear that the Avants wouldn’t be at the table this year.

Related: Find out what B&B’s Maya Avant Forrester has to be thankful for

Thanksgiving notes.
Well, it was an incredibly civilized holiday at the Forrester mansion, except for Ridge snarking at Bill. Pam and Charlie always make the kitchen scenes fun and also bring their comedic flair to the table, as Charlie told his ‘sugarplum’ Pam that she was the light in his oven. Hehe. The tradition of finding something positive to say to the person on your right was respected – Quinn didn’t even poke Katie in the eye with a fork when she clasped Eric’s hand – and it was fantastic to see the various Forresters, Spencers, and Logans all together again after so much dissension recently. Happy Thanksgiving!