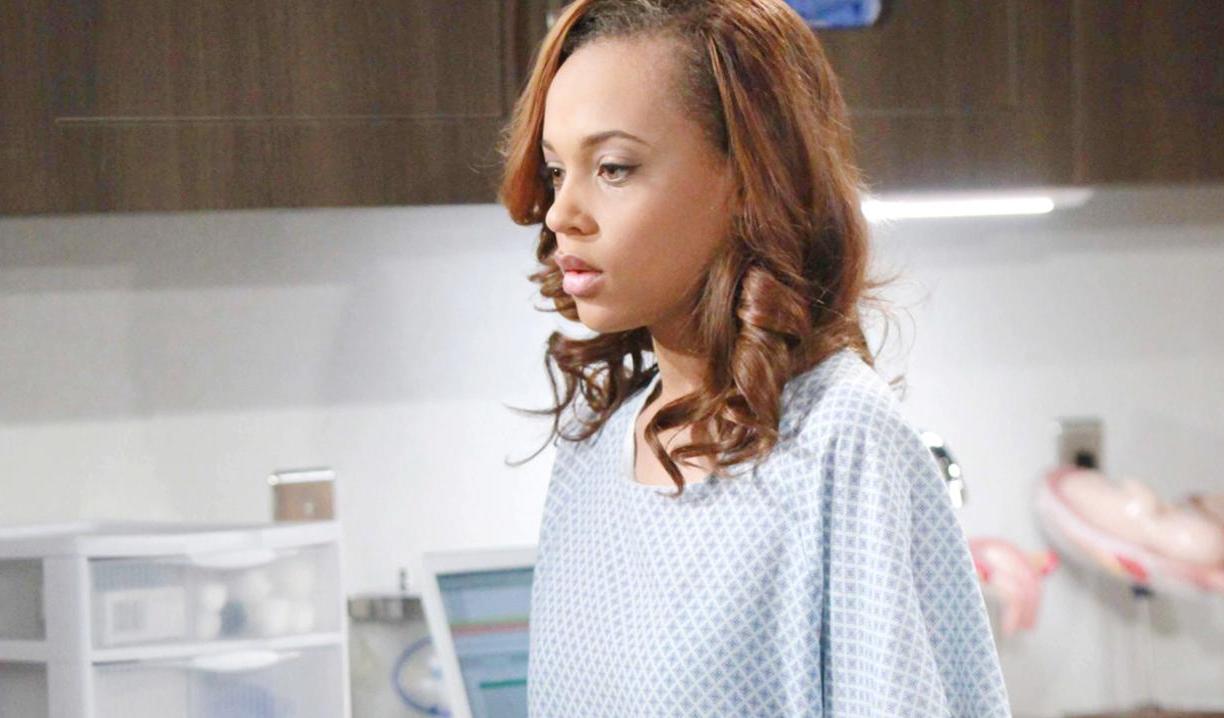 Halloween was a pretty dark and gloomy affair this year, what with Bill leaving Brooke at the altar, Eric squaring off with his family members, and Zende flying off hurt and drunk to Hawaii with Sasha. Thoughts:

Tainted love.
It was a sad time for Bill and Brooke after he pulled the plug on their wedding day after Ridge ‘ruined’ it. I saw his point. Brooke should have sent Ridge packing immediately unless she was actually open to his appeal, which she claimed not to be. It was a blight on what Bill imagined would be a day all about their love. The whole thing left viewers torn on who Brooke should be with, so unless Bill is going to throw in the towel, it looks like another of those dreaded “B&B” love triangles will ensue.

Party pooper.
The Forrester Creations Halloween party looked fun but it took a backseat to the more serious drama going on. It almost made me sad that Nicole, at her age, was dealing with the serious question of surrogacy, rather than dressing up and having carefree fun with her boyfriend. That said, the idea of possibly missing out on fun and travel with Zende didn’t seem to faze her much, and once again, her maternal urges were on display – should be raising red flags for Rick and Maya, who many feel shouldn’t have put her in this position again to begin with. Anyway, Caroline had intense chemistry with Ridge, but lo and behold, also made a sexy, flirty duo with Thomas in their costumes. I felt ‘into’ them and hope we see more of them…have they slept together yet? Intrigued… Getting back to the party, Zende did too many shots after getting the ‘bad’ news from Nicole and wound up with none other than Sasha. Basically, I was thinking ‘mess’ on both of their parts. The trip to Hawaii ended up being essentially a washout, and I was left wondering at the point of it all. Fans weighed in on the Zende/Nicole drama with some wildly opposing views:

@BandB_CBS Zende again is a big baby! Get over the issues and be the strong man Nicole needs! #ZendesWeak

@BandB_CBS sorry but Nicole knew how zende felt about surrogacy the first time and now she wants to do it again,don't blame zende if he left

Family feud.
Over at the Forrester mansion, a feeble but determined Eric squared off with Ridge and Steffy over their failed attempt to stage a coup and take over the company, after Wyatt snitched. Oy. As mentioned in the last Deconstructing “B&B,” the writers continued to ignore the fact that Quinn fired Ridge and Steffy, as Eric instructed them to cooperate with Quinn and Wyatt on the upcoming fashion show, as they were now in charge. In possibly the best line of the week, Ridge wanted to throw up in his mouth at the idea that Quinn running things and her insistence that Eric’s love had changed her completely. Given who we know her to be, it sure seems like a lot to wrap the mind around.

In any case, the family grudgingly agreed to work with Quinn, which should be interesting, and happily, viewers will get to see a fashion show. Yay! As transformed as Quinn is, her son is another story. He also agreed to help supervise at FC, and grumbled that Bill wouldn’t be happy about it, before turning his attention back to his failed marriage. Bleh. Wyatt’s now coming across like a whiny momma’s boy, and to cap it off, told Ivy he is avoiding Ridge in case he becomes his father-in-law again. What happened to the spine he had last week? Ivy apologized for wanting Liam more than him, which seems to be an issue of epidemic proportions in Wyatt’s world, which he shrugged off before continuing to moan about Steffy, who was simultaneously having her wedding ring tattoo lasered off with Liam by her side. Move on, Wyatt. Live and learn.

Priorities.
“You’re in Hawaii with a woman who isn’t me.” “You’re about to have a baby that isn’t mine.” Such great lines to illustrate the crossroads Nicole and Zende found themselves at, but it was his throwback to what he felt like as an orphan that seemed to finally give Nicole pause for thought, and led to her decide she hadn’t considered his feelings enough and had hurt him. After putting the brakes on the procedure, it was only soap appropriate that she couldn’t reach him, and that at that very moment, he was succumbing to Sasha’s charms. Yike, so close.

Moving day.
Loved Liam’s slightly geeky excitement at having Steffy back in the house, and laughed out loud that he started talking marriage immediately. Oh “B&B!”

Bob Dylan Has His First No. 1 Hit On The Billboard Charts – No, Really

How to Get Away With Murder Reveals Asher's Killer — Did You Guess Right?