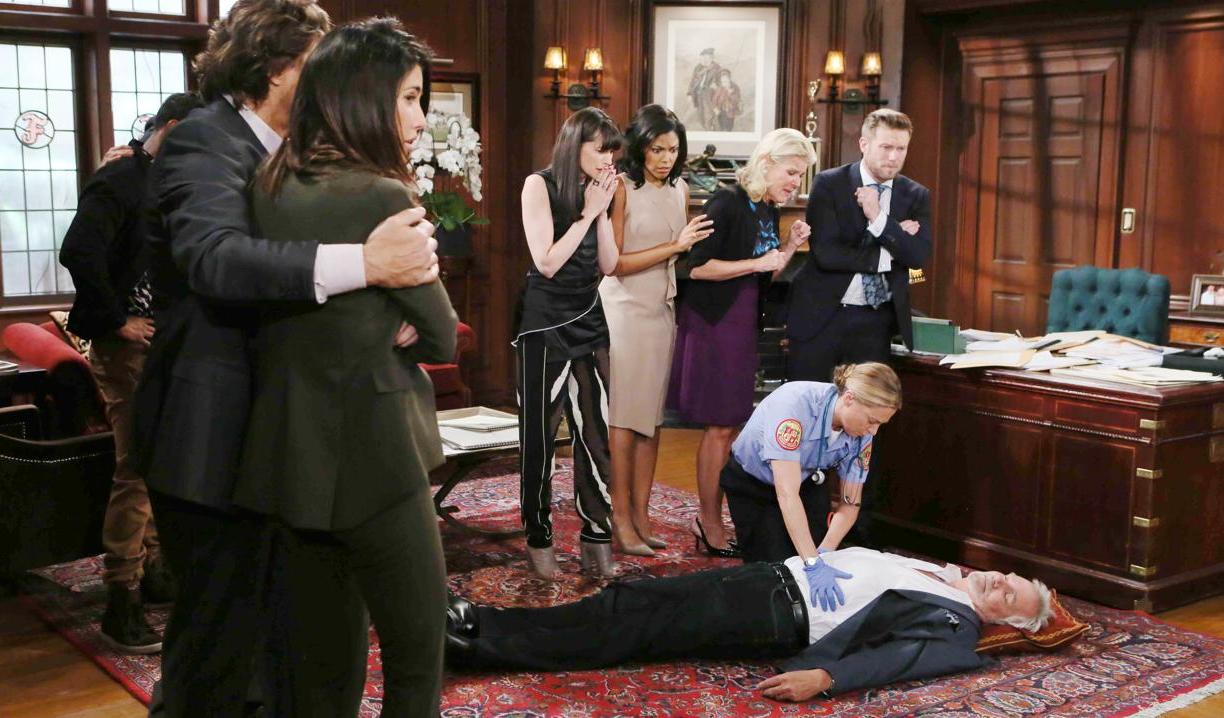 Everything else was on the backburner this week as Eric went through with the wedding to Quinn, and we were torn all over the place. No one wanted to see Eric get hurt, yet his family definitely had a leg to stand on with their opinion of Quinn, who has attempted to kill people among other no-nos. It was disappointing to see Felicia leave the canvas so soon, and yet somehow it wasn’t surprising – always seems to be the way. Thoughts:

I can’t let you do this.
It was both a sad and wonderful wedding, as Reverend Murphy tied the knot between Eric and Quinn despite her giving him an out. It was also rough to see the family members who struggled with the decision to boycott Eric’s wedding, and weren’t quite as resolute as Ridge and Steffy.

Hornet’s nest.
The Forrester clan leaving Eric high-and-dry at his wedding had fans slamming them and many siding with Quinn. They believe she’s really changed and love her with Eric. Fair. She certainly seems to have changed, and also genuinely loves Eric. However, she’s still been scheming (*cough* Ivy’s makeover *cough*), and is capable of some pretty scary stuff when pushed to her limit. Also, do we really want her to change? Hmm. So, while it wasn’t okay for the Forresters to hurt Eric, they maybe had a valid point in pressing him to slow things down, and you would think someone with as much life experience as Eric would have the wisdom to be cautious as well given Quinn’s track record. After all, it seems like just yesterday she held Liam captive and pushed Deacon off a cliff and left him for dead (though Quinn says that was all so long ago she no longer remembers that woman. Huh?). Anyhow, the kids had reason not to trust Quinn, and her not being able to win them over now, when she so desperately wants to and needs to is perhaps tantamount to a bit of payback for her misdeeds/crimes. Of course, it was heart-breaking what Eric felt over his family’s perceived abandonment, and that it led to a health crisis. A huge controversy indeed!

Leading up to Eric’s collapse, it became clear that Ridge was going to be depicted as the bad guy as he was still determined to challenge his father’s views. There was some intense drama as Eric went down, the seriousness of the situation began to dawn on his family members, and Quinn clawed – yes clawed! – her way through the group to reach her husband’s side. As the paramedics wheeled Eric out, Ridge got manhandle-y with Quinn, which effectively underlined his fury, but wasn’t cool. Fans’ opinions as the drama played out ran the gamut:

@BandB_CBS I hate that you are making Steffy and Ridge the bad guys and Quinn and Eric victims. #BoldandBeautiful it's just wrong! ?

@BandB_CBS Love Eric and Quinn. The rest of the family needs to beg for forgiveness. @JohnMcCook44 @RenaSofer Love you both together.

Sobering situation.
The heartfelt bedside scenes after it was revealed Eric had suffered a brain hemorrhage really had me choked up, and though the mood was more somber, Ridge and Steffy didn’t change their views about Quinn. Steffy and Quinn squared off in the corridor and both became quite impassioned and tearful. Such raw emotion from both parties – brilliant! Eric asked for Quinn, and Ridge promptly went to get her. Progress? Perhaps, but I’m expecting more trouble when whatever Carter saw on the power-of-attorney document is revealed. Also noteworthy, Wyatt has softened where his mother, and her marriage to Eric, are concerned, which could be the final nail in the coffin for his marriage. Waiting to see!