Deconstructing B&B: Brooke’s clan of cavemen battle over her destiny 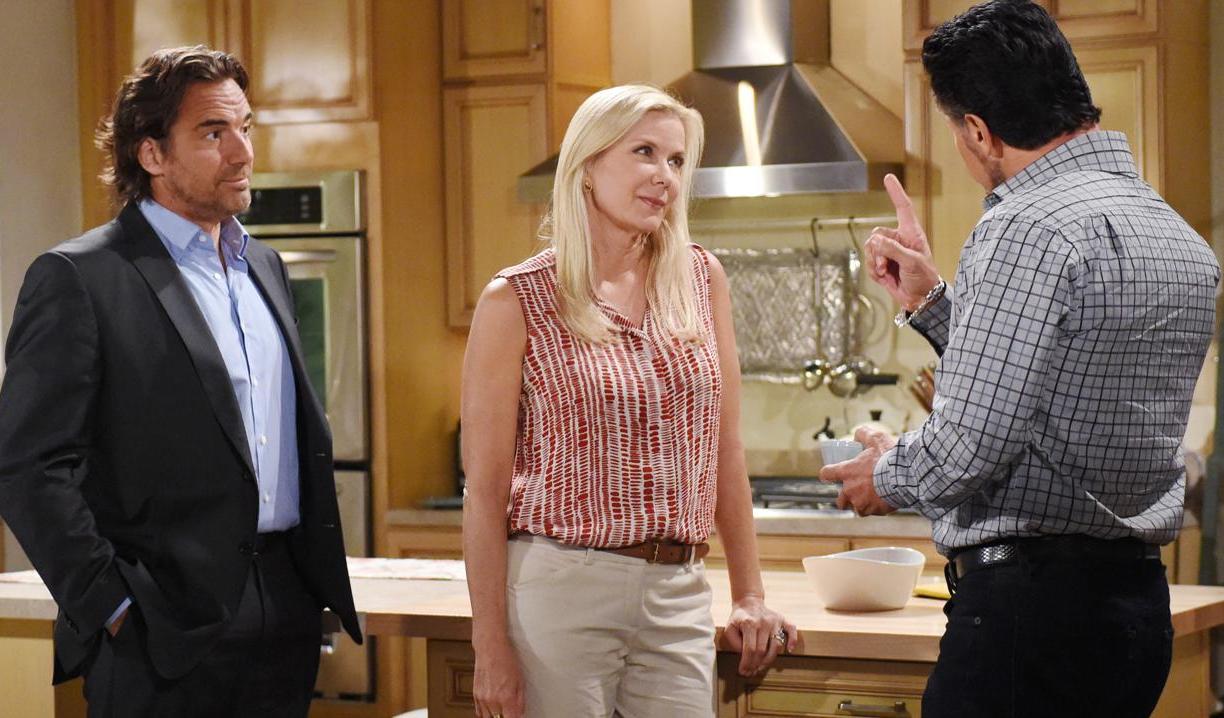 While I enjoyed the dramatic showdown between Eric, Steffy, and Quinn, and the bit with Maya singing at the Dodgers game was a cool distraction, the continued dragging on of Steffy’s limbo state bordered on ridiculous, and the establishment of a Bill/Brooke/Ridge triangle dismayed those who are ‘triangled’ out. Throwing RJ into the works got a mixed reaction from fans. Thoughts:

Dream come true.
While it came as a bit of a surprise to us that Maya’s dream was to sing the national anthem at a Dodgers game, it nonetheless made for some heartfelt scenes with Maya and Rick, and gave us a glimpse of the recently MIA Avants. Not only that but Karla Mosley’s singing was amazing! Goosebumps!

Take it back!
Steffy’s reaction to the Eric and Quinn engagement seemed a tad over-the-top, but deliciously so, as the more determined Steffy and Co. become to rid their lives of Quinn, and the more fed up Quinn gets with trying to be pushed out, the more the potential builds for something huge to happen in the storyline.

Wishy-washy Wyatt.
In the last blog, it was proposed that we might have more respect for Wyatt if he put his cards on the table with Steffy, and he did, but alas, slunk away at the end of the confrontation without receiving the answers he had demanded. Further, he didn’t follow through and end the marriage himself due to her refusal to make a decision. Worse still, he went directly to Quinn to commiserate and it almost sounded like he was colluding with her as he warned her they ‘still faced huge challenges’. Like mother, like son? Steffy may have reason to worry. Here was one fan’s take on the situation:

@CandaceLYoung Wyatt has succeeded in proving he's a hard-up clown that has no backbone *& change those 2tight pants*..Run Steffy Run!!!

Sex in the Stone Age.
As Brooke’s wedding to Bill looms, Ridge seemed to be weighing whether snagging Spencer’s shares were a fair trade-off for losing a woman to him. For Bill, the fact that he was taking Ridge’s ‘Logan’ had him puffing his chest out and gloating. Cavemen, I tell ya’. Bill can’t be as confident as he seems, however, since he announced he won’t ‘allow’ Brooke to hang out with The Dressmaker or work at Forrester Creations after they’re married. Caveman! Meanwhile, Ridge’s territorial instincts kicked into high gear as he grabbed Brooke and pulled her onto his lap in the office. Caveman! At this juncture, their son RJ materialized out-of-the-blue and proceeded to announce that he couldn’t ‘allow’ his mother to marry Bill Spencer. Caveman-in-training! Brooke and Ridge’s entitled offspring then showed up in Uncle Bill’s office to confront him about ditching his aunt for his mother. Honestly, it’s like the modern-day equivalent of cave people as the men drag Brooke around by the hair as they grunt, posture, and try to intimidate each other. Haha!

Friday notes…
For those invested in ‘the plan to get rid of Quinn’ RJ’s reappearance and ensuing tantrum should prove to be extremely inconvenient at best. I cracked up at him informing Bill the wedding was not going to happen. Hehe! All of the sudden Bill cut the charm and told the kid to know his place. So it’s anyone’s guess if Brooke will go through with it now. Quinn, meanwhile, met with her loyal follower, Ivy, and regaled her with tales of Ivy landing Prince Liam and Quinn being the next Forrester matriarch. She also warned of Steffy getting kicked out of Forrester Creations if she doesn’t smarten up and get on board. Talk about dialing up the tension several notches! Wait until Steffy gets wind of this…