Katie and Bill’s emotional parting a highlight amid stale storylines 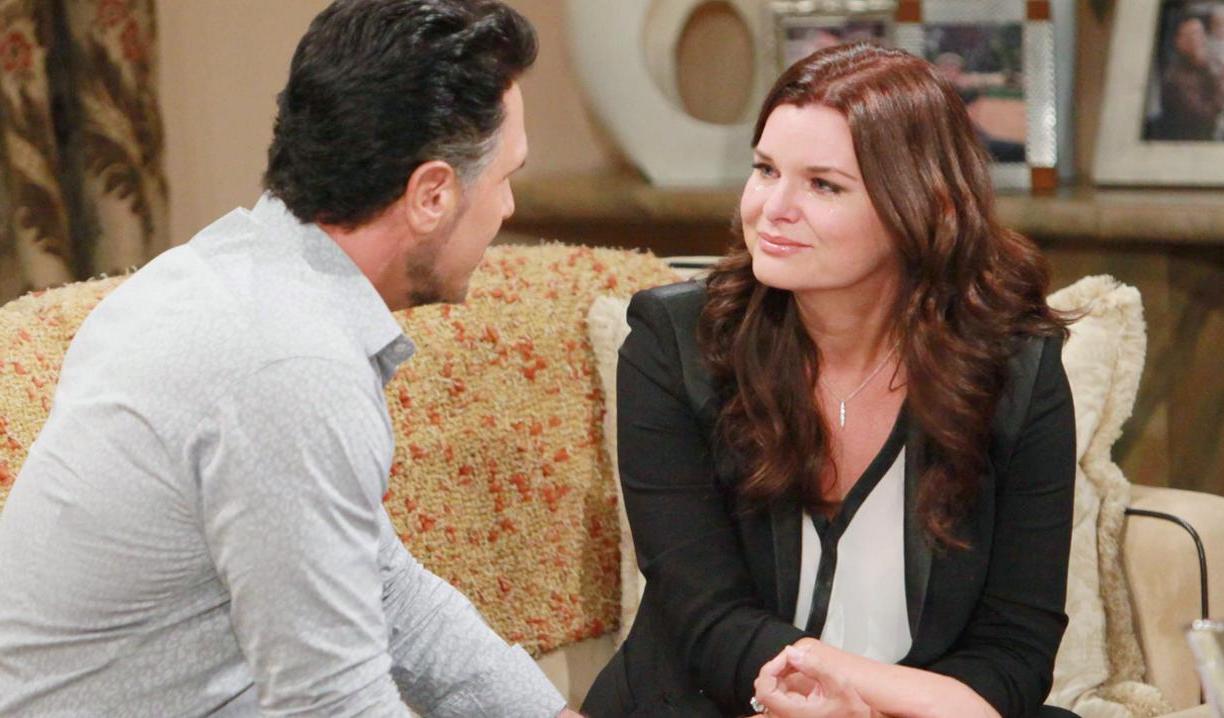 Katie and Bill moved forward with their divorce, which provided some brilliant emotional scenes. There was some conflict as Eric tried to turn the tables on Steffy, and Ivy’s return was something new, but much of the rest felt stale or already done – the repetitive conversations surrounding Steffy leaving Wyatt, the possibility of another Bill/Brooke/Ridge triangle, even Quinn hatching yet another scheme to ‘help’ Wyatt felt tired. Thoughts:

Same stuff, different day.
In soaps you have to create/maintain conflict, but the situation surrounding Steffy leaving Wyatt (and the Wyatt/Steffy/Liam triangle) has become too frustrating for words – an endless loop of repetitive conversations that go nowhere: Wyatt points out that leaving him doesn’t get Quinn out of Steffy’s life, and Steffy responds by rehashing what Quinn did to her, Liam pushes Steffy to make a decision and come back to him and she yammers about why she can’t be with either of them right now, and Liam and Wyatt keep having that same rehashed argument about ‘respecting the marriage’ they’ve been having since Liam came home from the cabin. Steffy appeared to be more her old self when she squared-off with Quinn at the Forrester mansion, and I’d like to see more of her taking definitive action so as to jar this storyline out of the rut it’s in.

Change it up.
Loved Pam and Charlie getting up in Quinn’s face at work, it will be fun if they actually watch her every move. And there should be something for them to see soon, as Quinn no sooner told Pam she’d changed, then she was back to scheming after learning from Wyatt that Liam was pursuing Steffy. Conveniently, Ivy returned, and was so eager to get back into the company that she was easy pickings for the conniving Quinn, who forced her into a makeover to look more like Steffy, which was actually kind of hilarious. That said, it might have been more interesting if Quinn’s mind had twisted around to where she decided Steffy had become too big a problem and she needed to get her out of Wyatt’s life and Forrester Creations – instead of another go round of trying to come between Liam and Steffy, which is clearly her plan with Ivy. Been there, done that.

All smiles.
Thomas and Sasha remained ‘cute’ this week, but something needs to happen in the storyline to create a little tension or sizzle so it doesn’t get boring. Nicole and Zende finding out didn’t make much more than a ripple since there’s really not much either of them can say.

It’s complicated.
Though I enjoy the dynamic between Bill and Brooke, and the low-key connection being re-established with Brooke and Ridge, this could be veering dangerously close to being another of B&B’s dreaded triangle repeats. As for Katie, she may have walked away from Bill, but clearly doesn’t want Brooke to have him, and that’s realistic. Who is that good-natured? The scenes with Katie and Bill tearfully signing away their marriage were far and away the best of the week. Such understated but powerful emotion!

This Katie and Bill scene is pretty lovely. It feels like actual closure and they can both go on their separate paths. #boldandbeautiful

Later, while Katie worked to push Ridge to reclaim Brooke before Bill could marry her, Brooke was over at Bill’s accepting his marriage proposal in what turned out to be a real cheesefest. “My sword!” “My man!”

Hornet's nest stirred up by Quinn...