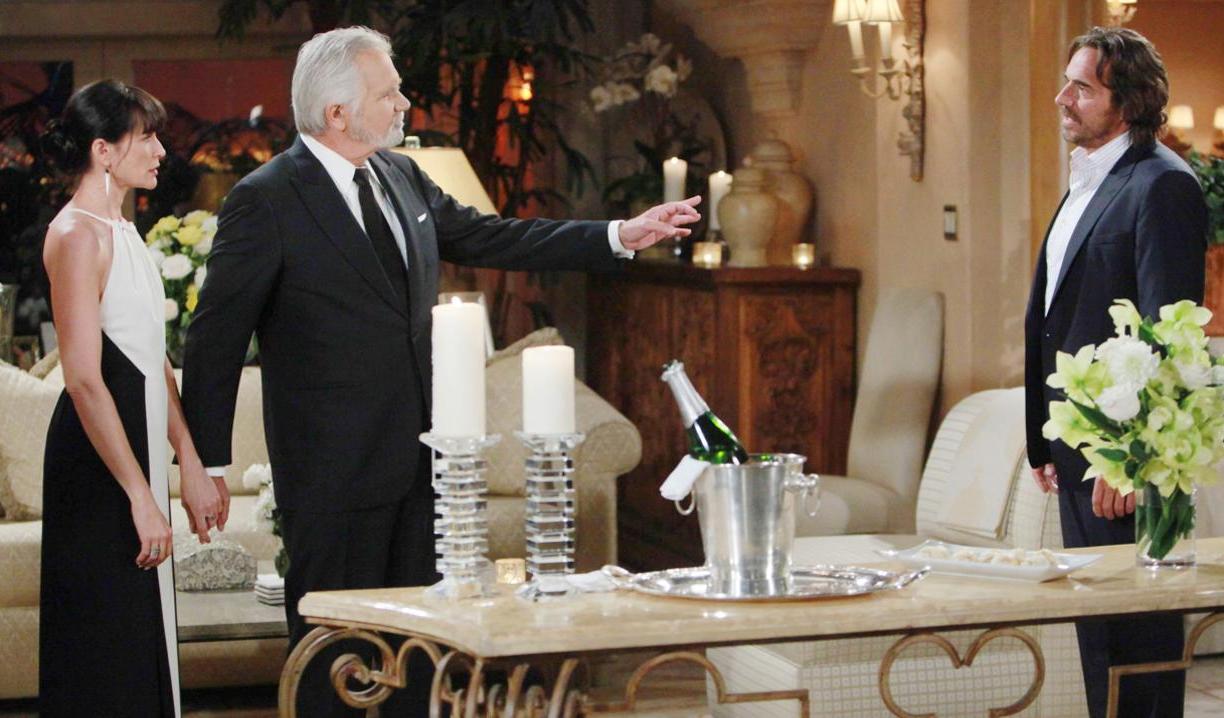 Once again this week, the show centered mainly on the fallout from Quinn’s relationship with Eric. I was a little disappointed that Quinn kept up with this wide-eyed ‘I don’t want to cause any trouble’ routine, as she’s more entertaining when she’s pushed to the limit and turns scary. Eric getting all blustery and threatening was great fun! Anyway, aside from that drama, we’ve still got the Wyatt/Steffy/Liam triangle going on, and another triangle possibly looming with Brooke being pulled between Ridge and Bill, heck, Katie might even get in there for a triangle with Brooke and Ridge, who knows? Nothing we haven’t seen before, which is a bit disheartening. Thoughts:

Come on in.
Thomas and Sasha spent some more time together, and it was refreshing that they talked and tried to get to know each other as opposed to just hitting the sack. Thomas dallying with models is nothing new, though he had swore he was done with that, so it will be interesting to see the reaction from Ridge and Co.

Bygones.
In last week’s blog we wondered if Steffy would walk out on Wyatt, and this week, despite his begging and pleading, Steffy followed through on her threat and left him. It’s all kind of murky what this was supposed to accomplish given that Quinn works at Forrester and lives in her grandfather’s house, so in no way does leaving Wyatt get Quinn out of Steffy’s life. Clearly there are other motives at work here, even subconsciously. Her exit, in any case, landed her at Thomas’ pad, where he wasted no time in inviting his new ‘bro’ Liam over. It was kind of cute how Liam acted once he realized Steffy had left Wyatt. That said, viewers want an end to the triangle:

I wish #BoldandBeautiful would outgrow triangles involving the Spencer brothers. It's tapped out.

Try me.
Eric wasn’t on the scene for Steffy’s confrontation with Quinn, but later was decidedly fed up with these people showing up and trying to, ahem, block his action. His exchanges with both Ridge and Wyatt were surprisingly intense. I have to say, even if it turns out he’s dotty, it’s been fun watching him assert himself.

Spotlight on… Quinn’s unexpected hook-ups with Eric and Liam

He’s baack!
Laugh out loud moment of the week was Rick’s momentary panic thinking Ridge was moving into Brooke’s house. Too funny! Later he and Ridge actually agreed again about needing to take action to neutralize Quinn – she’s not your average golddigger! Hehe. Some viewers like Rick and Ridge being in agreement for a change:

It's good to see Rick and Ridge on the same side for once, even if they are patronizing Eric in the process. #BoldandBeautiful

Not sharing.
Bill wasn’t budging on the Forrester shares, and it was kind of refreshing seeing Katie take the high road, accept that he wasn’t handing them over, announce she’d moved out of the house, and inform him she’d await the new sweeter settlement deal. She did, however, fish to find out if anything was going on with him and Brooke. Given that Bill had no idea, hehe, he kept mum.

News: Learn which soaps are on Labor Day

Indecent proposal.
Ridge and Brooke brought Steffy and Thomas in on the plan to use the Forrester shares to take back control of the company, but by then Ridge had realized that time was of the essence and decided that Brooke, not Katie, was the quickest way to the 12.5%. It will be interesting to see what lengths Brooke will go to in order to secure those shares for Ridge. Will she take the opportunity to marry Bill and help Ridge in the process, or will it be the ultimate show of loyalty to Ridge – marry Bill, get the shares, and then dump him? And what if Katie and Brooke both decide they want Ridge? I’m thinking that would leave one bitter and vengeful Bill running around.

Relationships hang in the balance...

Katie and Bill's emotional parting a...