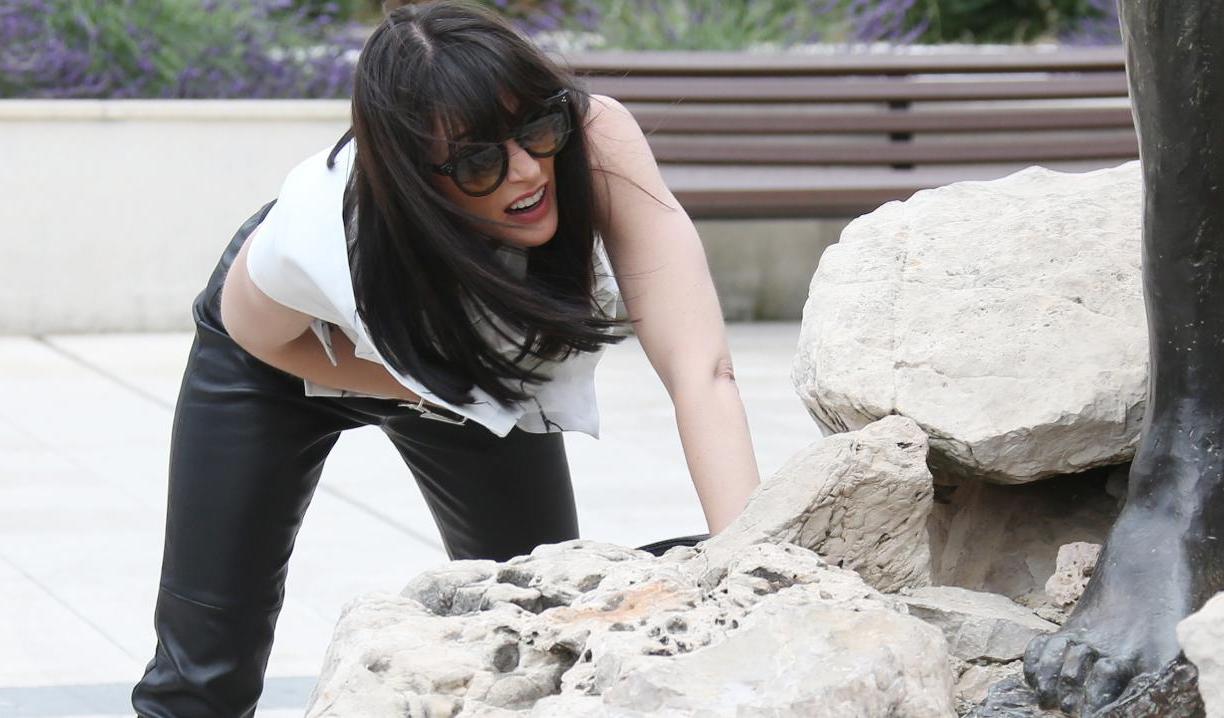 As mentioned in the last “B&B” blog, this week was all about anticipation for the showdown between Quinn and Steffy, and we certainly weren’t disappointed! Across the pond, Ridge and Thomas forgave each other and Ridge decided his new focus would be on protecting his aging wealthy father from being taken advantage of – incredible timing, hehe. Thoughts:

Never!
How juicy was the build-up to the clash between Steffy and Quinn? Eric and Quinn kiss goodbye on the street, Steffy appears, but Quinn’s hat hides her identity. Steffy approaches her grandfather’s mystery woman and then suddenly the chase is on! After a rather impressive bit of running, Steffy caught up to Quinn and tackled her to the ground, leaving us all panting for the next episode. Steffy wasted no time in accusing Quinn of targeting Eric, and given her track record what else would anyone think? Quinn gave Steffy the evil eye when she threatened to put an end to her love affair, but Steffy didn’t back down, in fact she delighted viewers who were hoping Quinn would finally get some payback by smacking her so hard across the face she knocked her to the ground. Although I will say that Steffy’s been a little out-of-character in this, as she’s not generally the hysterical damsel-in-distress type, it’s still been fun, and I can’t think of a better soap slap! The actress who plays Steffy, Jacqueline MacInnes Wood, tweeted that the slap was real, and fans, and co-star Rena Sofer reacted to the scene:

Hahahhahah as you can see… this was a REAL slap https://t.co/IXiVKXAh5y

@boldinsider @RenaSofer @JacquelineMWood looking like grandmother Stephanie there Steffy , just what Quinn needed . wish I cld have done it

The Monte Carlo mash.
Fallout from the clash of Quinn and Steffy included Eric dumping Quinn in an unexpectedly poignant scene that left us torn, and Steffy ranting to Wyatt about his evil mother. Wyatt was relatively blindsided as he somehow didn’t see this coming despite all Quinn’s done previously, and was left in a lather trying to ensure his mother had left, while worrying about the state of his marriage. And worry he should, as Liam, who had sensed all along that something was up yet couldn’t convince Wyatt, wasted no time in planting a kiss on his shaken ex and advising her to leave the Fullers behind. Many wanted Steffy to just listen to Liam and jump back into his arms and start making babies, but I feel like it won’t be that simple and the Statt marriage will go on longer, thus giving Quinn more chances to do damage. Also, like Wyatt, I don’t believe for a second that Quinn just accepted she can’t be with Eric and will go on with her life. What fun would that be? Hehe.

Where Are They Now? Soap icon Susan Flannery

Keeping it in the family.
Back in L.A., Ridge was hanging out with Brooke again, and later made amends with Thomas. The father and son discussion about Ridge ending his marriage to Caroline was kind of weird – like no one actually came out and said that Ridge expects her to end up with Thomas, but yeah…awkward. Anyway, in that comical way “B&B” has of aligning characters’ interests with what’s happening plot-wise, Ridge suddenly decided to focus on Eric…just as the news of the Quinn affair broke. Yup. It’s gonna get ugly with everyone trying to tell Eric what to do.