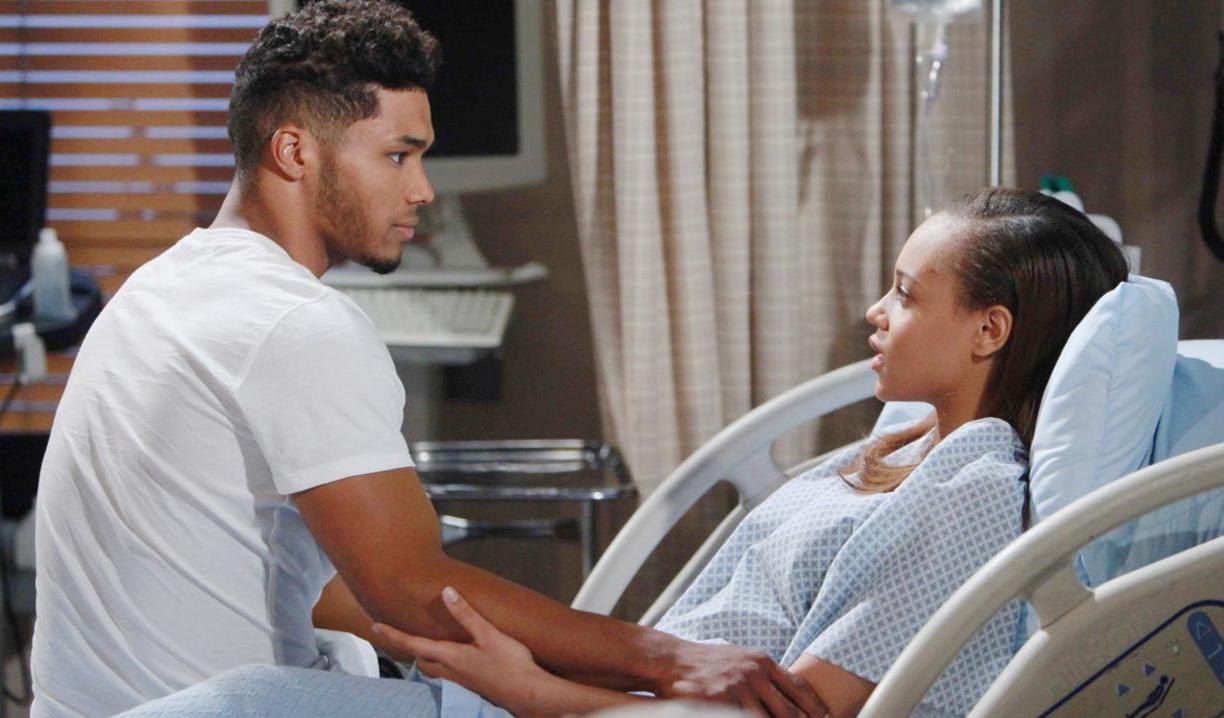 There were several people looking to move on from mistakes they had made in the past this week, including Julius, Zende, Brooke, and Quinn, and a new Forrester baby made her way into the world. Thoughts:

Take her away.
The scenes with Quinn, handcuffed and dressed like a church lady, and pleading with Liam seemed suspiciously geared toward making us feel forgiving toward her, and maybe even rooting for her to win Liam (or Adam) back, but they really just made her seem more over-the-top and delusional than ever. As mentioned in last week’s Deconstructing B&B, Steffy staying with Wyatt when Liam returned was too unbelievable, and Steffy’s waffle-y behavior was also out-of-character, so it’s just been difficult to ‘feel’ this storyline at all. The last thing that seemed like it made sense was Liam and Steffy running into each other’s arms on the beach.

It’s time!
Pam running through Forrester Creations with that exercise ball hollering at Zende to boil washcloths or whatever was a hilarious start to Nicole being in labor. For once, Rick had nothing to say about Ridge as they all headed into the delivery room at the hospital. Had to laugh about Zende disguising himself in scrubs and hanging back in the corner to watch – creepy but sweet? Anyway, Nicole seemed to have a relatively easy time of it, and it was truly moving when Maya and Rick finally got their baby, with Reign Edwards’ singing These Are The Moments in the background. Nicole later got some one-on-one time with Zende, who confided he’d been there the whole time and wanted to get back with her because she was so amazing. Nicole was all for it, though some thought she shouldn’t be so quick to let him off the hook.

Knocked up?
It’s been easy to feel bad for Sasha sometimes, given that she grew up feeling ‘less than’, but the way she goes about things is so wrong that she ends up not being sympathetic. Case in point, she seems to have cooked up a lie about being pregnant to hang on to Zende, when she sensed he was about to dump her and reconcile with Nicole. It’s also easy to feel Zende’s frustration with Sasha, but he might deserve just a bit of a pregnancy scare because of how he’s played it with these two young women. Sure he tried to be straight with everyone involved, but let’s face it, jumping into bed with Nicole’s best friend was never cool, especially when he harbored feelings for Nicole. Viewers weighed in on the pregnancy announcement:

@BandB_CBS @Feli7sha Oldest trick in the book. Say your pregnant when ur about to lose your man. ????. #BoldandBeautful

@BandB_CBS @Feli7sha she such a liar.She set the trap and the dummy fell for it.

Mistakes as a father.
Julius turned up at the hospital, and just as the tension ratcheted up, his vulnerability swept us again as he held his new granddaughter and choked up. “Papa’s got you.” Argh, tissue time! He was still floating from that encounter when he ran into Sasha, but soon crashed back to earth as she informed him she was pregnant. Julius, like viewers, was reluctant to believe her, especially given the oh-so-convenient timing.

Walking around naked.
So, Brooke, who should know enough by now never to step foot in Katie’s house without an invitation, found herself face-to-face with Bill in a towel as she was dropping off a surprise dress for Katie. I kept waiting for him to make his stallion noise. Ha! While they debated about her being in the house, Katie arrived home and Brooke made a split-second decision to dive under the bed and hide…’cause that’s not going to make you look guilty! Katie, faced with her hot hubby post-shower, decided to forgo their plans in favor of some love in the afternoon. How funny to see the dress and towel dropping to the floor while Brooke reacted under the bed! Even funnier was Brooke crawling out and hollering at them to please stop after Katie pushed Bill down on the mattress. Hysterical! Despite the comic relief, the situation turned darker as Katie felt her concerns about Brooke were falling on deaf ears and locked herself in a room with a bottle for company. It was moving how she teared up thinking about her marriage and then elected not to take a drink. Meanwhile, down in the kitchen, Brooke hung around…and hung off Bill, as she told him how lucky Katie was to have him. Umm, considering what just happened, why would she think it was a good idea to be hugging him? Argh.