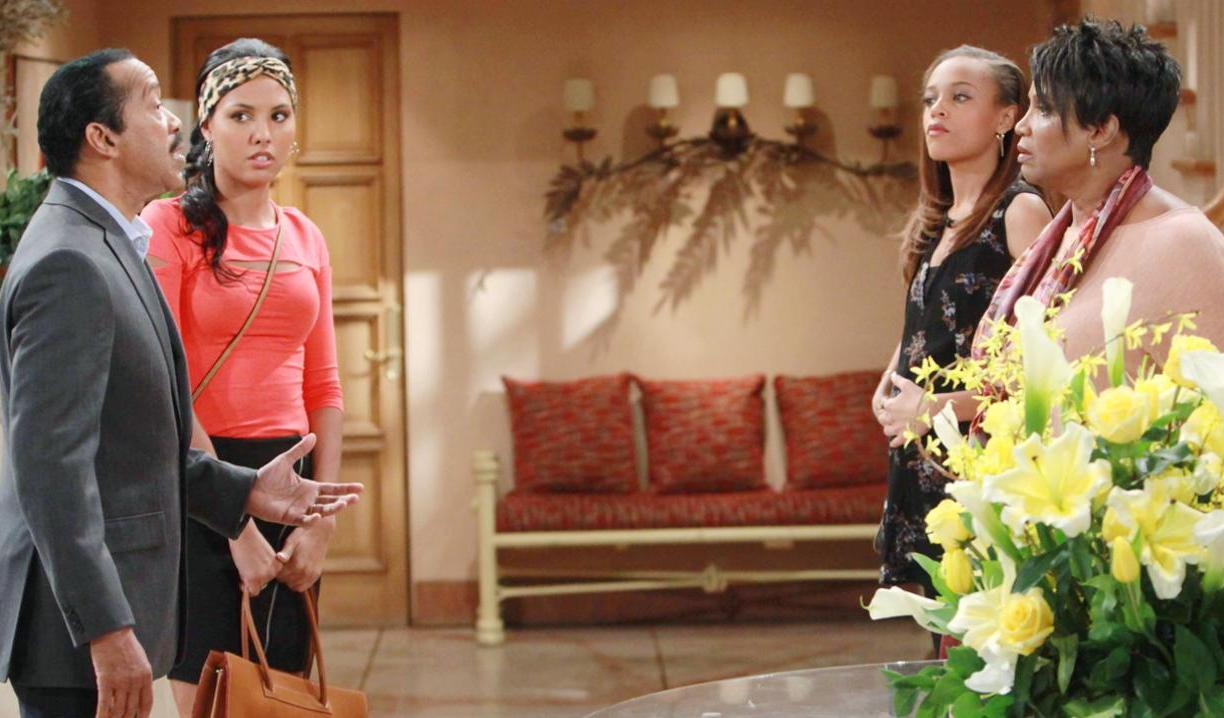 Viewers were treated to some of the best emotional scenes in recent memory this week when Julius’s secret came out, and when Katie learned the truth about Douglas unexpectedly…and we know there is more to come! Also, kudos to the writers for not dragging these secrets on too long – the timing of the reveals felt just perfect. Thoughts:

Sisters.
It was an interesting choice to have Nicole react to Sasha’s admission the way she did, and it worked for the story. Nicole could easily have directed her anger at Sasha – supposedly her best friend, yet kept this huge secret from her and stole her man as well – but instead she put the blame squarely on Julius, for putting Sasha in the position of having to keep the secret so as not to rock his boat. Nicole’s confrontation with Julius was intense, and she didn’t let him work her at all. Clearly she gets it from her mama…

No way out.
Julius wasted no time after Nicole’s visit – he made tracks straight to Sasha to try and run her out of town. He might have got away with it too, if not for his meddling kid. Hehe. Nicole managed to get Vivienne over there before Julius was able to get Sasha out the door and on her way to LAX, and what happened next was explosive. Julius, knowing he wasn’t squirming out of this one, tried to pad the bad news with some cute stories, but ultimately had to tell Vivienne that he’d cheated on her and that Sasha was his. Yike! Vivienne boomed, “You and Lucy?” and I was riveted. What followed was a confrontation for the ages – Julius, cornered, boomed and blamed, and tried to justify his actions, even crying as he described the terrible stress the secret had caused him. It was kind of fascinating to see his vulnerability in the same moment he’s being so rude and wrong. You just know that being who he is, he just doesn’t get it…it’s a bit sad. Anyway, Julius begged a livid Vivienne to tell him they could get past this. Well, it was way too soon for that question! Vivienne was having none of his ‘I did it for you’ bull, and ordered him off the premises – and it wasn’t even her house. Julius, not being completely stupid, left. Vivienne had her say with Sasha too, and then had a good cry with the girls, and that was definitely my undoing. Not a word was uttered, yet I was totally drawn in and teared up along with them. Awesome. Viewers reacted on Twitter:

@BandB_CBS beautifully acted!!! Tough to watch…poor Viv!! And glad truth is out. Love the ending scene with Viv Sasha and Nicole!! ?

@BandB_CBS oh that was amazing Avant family drama. I am still crying!

The Thomas twist.
As mentioned in the last Deconstructing B&B, Katie wasn’t about to let Ridge off the hook with regard to Dr. Wolin, and ironically, just when Ridge fed her an explanation that finally satisfied her, it led to Caroline inadvertently spilling the real truth – such a brilliant twist. Once Katie knew that Thomas was Douglas’ father, it was all over. She clucked and wagged her finger at both Caroline and Ridge for keeping the truth from Thomas. Ridge, who was visibly sagging under the weight of the secret and Katie’s non-stop interrogations anyway, agreed to come clean. I was full of anticipation, but was a little letdown at the awkward way Ridge just sort of let Thomas put the pieces together. That said, all the emotional reactions and confrontations are still ahead. Can’t wait!