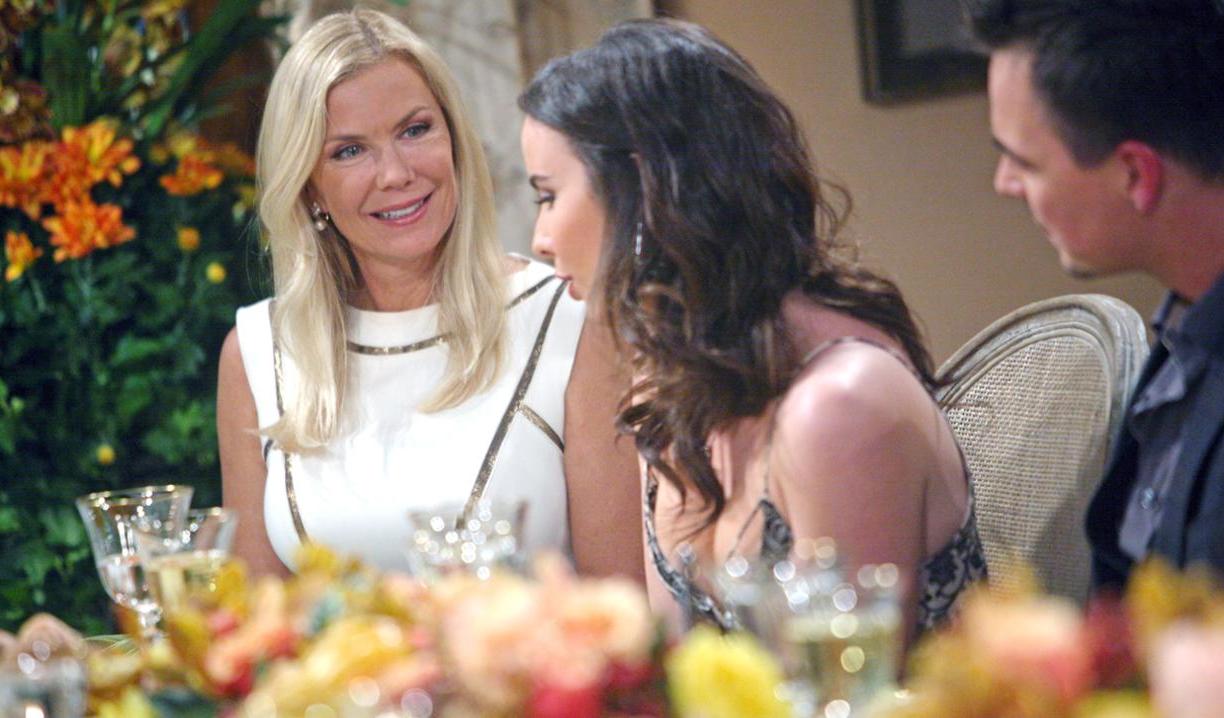 Ivy’s attraction to Thomas continued to threaten her relationship with Wyatt this week, as the Avants joined the Forresters and Spencers for a Thanksgiving meal. Thoughts:

Terribly wrong, yet so right.
As mentioned in last week’s Deconstructing B&B, Thomas proposed that Ivy get ‘a little crazy’ with him, but it seems she didn’t get quite as crazy as he would have liked, as he failed to get her into bed. Thomas is being portrayed as a ‘playboy’ who is following in his father’s footsteps, however some are just seeing his behavior as sleazy, which is a turn-off. His cocky attitude about ‘luring’ Ivy away from Wyatt made it satisfying to hear that Ivy hadn’t slept with him. That said, despite Ivy’s Herculean efforts to convince herself that she’s all about Wyatt, she seems tempted repeatedly by Thomas. This, again, left many questioning the change in the character, as she was previously not the type to have her head turned by someone like Thomas, or to cheat on her boyfriend. For Wyatt’s part, his behavior indicates that he senses a situation developing in which he could lose her. It will probably be a disaster if they move in together, as Thomas will likely respond by redoubling his efforts to steal her away. Many would like to see Ivy resist:

@soapoperafan Usually Ivy appears to be a smart woman, but the show is making her weak when it comes to Thomas. I don't like it at all! #BB

Going through something.
Wow, I’m finding Zende is all over the place with his feelings about Nicole carrying the baby – that can’t be good. One minute it seems he is upset, almost angry, that he can’t have her all to himself and that she put the surrogacy before them, and the next minute he says he admires what she’s doing. I guess both are true. In any case, whatever is going to happen should happen soon, because their conversations are getting repetitive.

Remember when…
Eric’s remembrance of the kind of love he and Stephanie shared was real and touching. It was odd when Rick offered to put her portrait back up on the wall, however. Many still haven’t adjusted to the mansion being Rick’s home now, especially with Eric rattling around there and even, at one point, talking about Brooke moving back in there.

Thanksgiving tradition.
The Forrester/Avant/Spencer Thanksgiving dinner was another for the books. From the football, to the quips in the kitchen, to Bill’s one-liner about dispensing with Hope’s tradition since she wasn’t there, it was awesome. Of course everyone had to say something nice to the person sitting beside them. For the most part it wasn’t a challenge, as couples were seated together, and aside from the love expressed in the room, the most heart-warming exchange occurred between Julius and Maya, who managed to put some of their baggage behind them, or so it appeared. All in all, it was amazing to see the holiday celebrated and a ‘feelgood’ way to wrap up the short week.

This is an opinion column. Feel free to leave your comments in the section below.