Tuesday, January 17, 2023: Today on The Bold and the Beautiful, Liam and Hope find out that Bill's with Sheila, and Katie implores her ex-husband to put Sheila back behind bars. 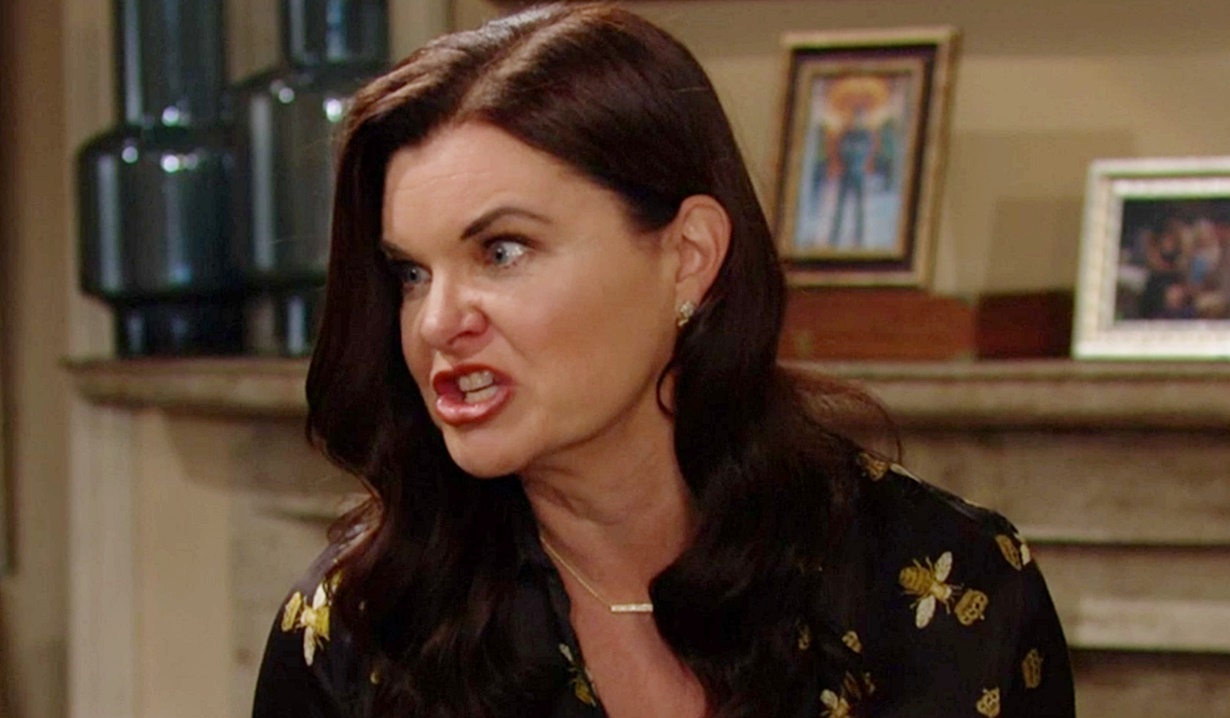 At Bill’s place, Katie tells him he doesn’t have to do this and adds, “She has done something to you, I can see that.” Sheila, behind her, insists he’s with her of his own free will. Katie doesn’t know why he’s blackmailing Steffy and Finn and doesn’t need to know why, but she can’t believe he’d use all of his power and influence to defend Sheila. Katie hollers that this is crazy and ludicrous, and she’ll never accept it. Sheila bellows that she doesn’t have a choice. Katie implores Bill to snap out of it — this is not the man he wants to be. 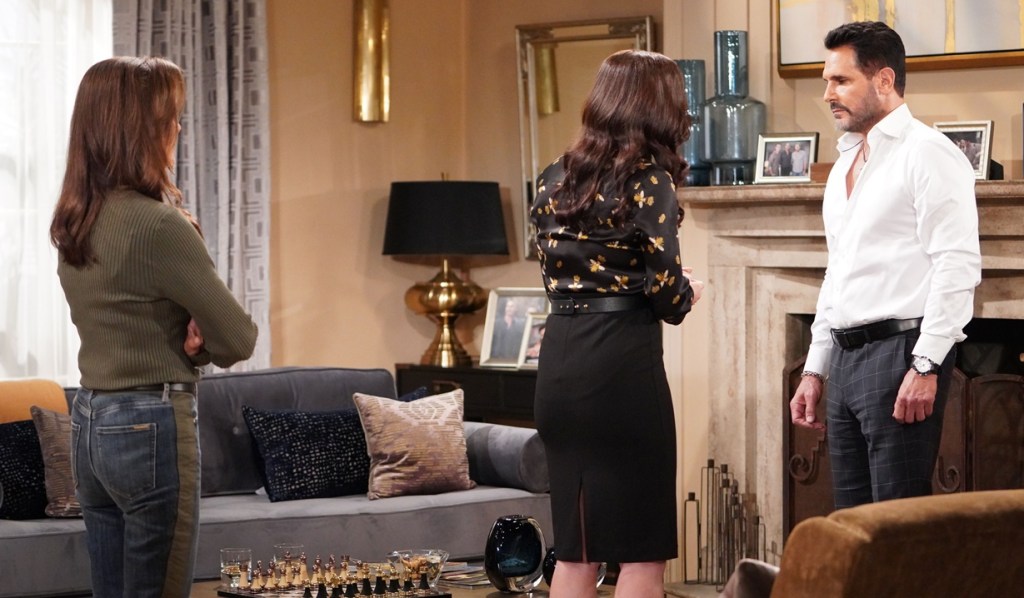 At the cliff house, Steffy and Finn recap the situation with Sheila and Bill. Finn vows he won’t let his birth mom near his family. Liam and Hope arrive. They’ve heard Sheila went free. Liam asks, “How the hell does that happen?” They go over how Steffy and Finn were supposed to testify against Sheila at the hearing and want to know what happened. Steffy intones, “Your father happened.”

At Bill’s place, Katie tells Bill he can fix this. “Just pick up the phone and call the police. You’ve got to get her back in custody.” Sheila sneers, “Who do you think set me free?” Katie hollers at her to shut up — this is between her and Bill. She implores her ex to think about his grandchild, Kelly. “This woman was going to leave her motherless!” Katie knows he cares about Steffy and has vowed to protect his family. “We need you to stand up and protect us. Protect us from Sheila.” 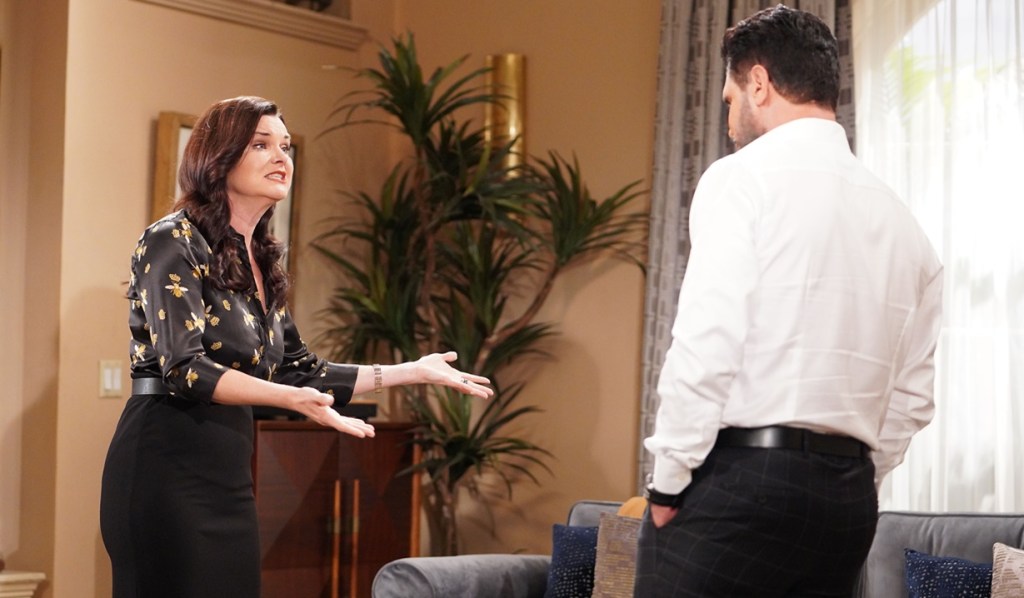 At the cliff house, Liam can’t believe that Bill is blackmailing Steffy. “He promised he would never say a word, that he would never go to the police.” Steffy recaps that it was the worst moment of her mother’s life. Hope can’t believe Bill is trying to throw it back in her face. Steffy explains she couldn’t risk her mother’s freedom. Liam asks about the other charges. Finn explains that Mike Guthrie claimed he took Sheila from the jail against her will. Liam agonizes as he hears that Bill engineered this and bought Judge McMullen. He can’t understand what the motivation was for all of this. “My dad hates Sheila Carter.” Steffy declares, “Bill and Sheila are involved.” Liam gawps. 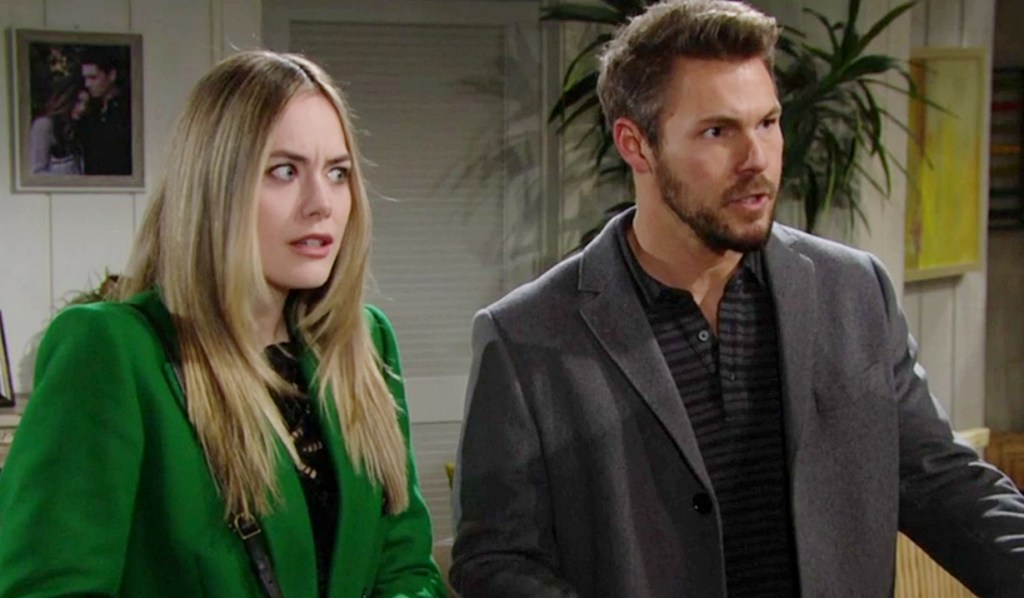 At Bill’s place, Katie knows how important his family is to him. She pats his sword, “That’s what this is about.” She implores him to protect them. Bill says he’d never let anything happen to his kids. Katie feels he needs protection too, because she’s poisonous! She cries that Bill has been hurt but he knows how to love. “She can’t give you that, Bill. She can’t love. She will destroy everything that you care about. Don’t let her do it!” Sheila interrupts. She’s stood by patiently while Katie’s insulted her but she’s wasting her time. She has no right to say who Bill can or cannot be with. They love each other and are building a future together. Katie hisses that the only future she has is behind bars. “You will finally pay for your crimes. And you know I’m right.” She bellows at Bill to say something, “Tell her I’m right!” He shakes his head slightly and looks at the floor. 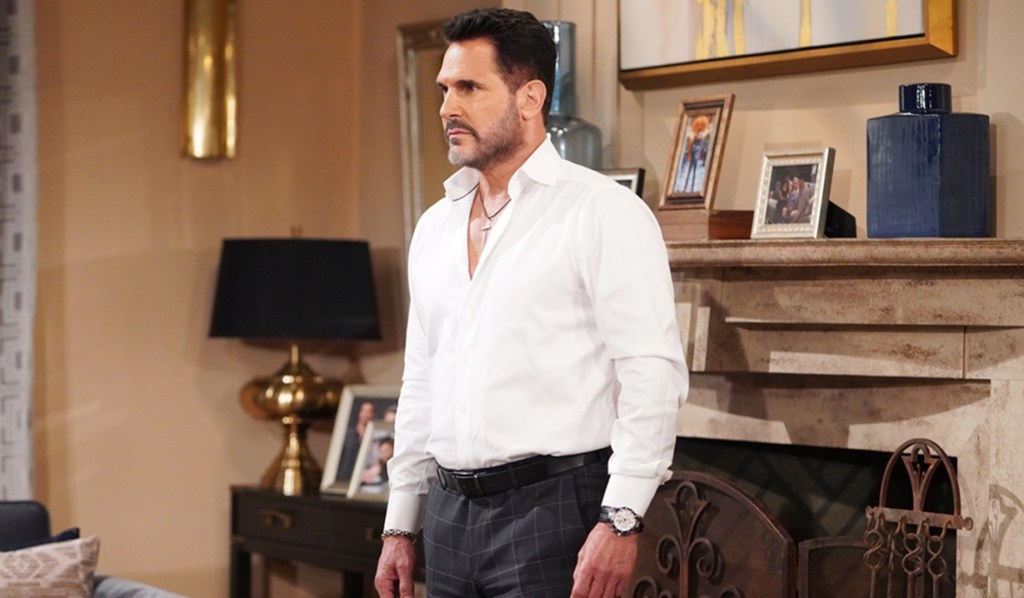 At Steffy’s house, Liam grimaces when she and Finn tell him they saw Sheila and Bill kiss. Hope doesn’t know what’s gotten into Bill’s head. “Clearly, he is not doing okay.” Liam exclaims that he’s lost his damn mind! Steffy relays that she asked if Sheila is holding something over him, but he said no. Liam reels and says he needs to talk to his father. Steffy says Katie’s over there now and they’re hoping she’ll get through to him.

More: It’s time for B&B to bring in [Spoiler] to get Sheila

At Bill’s place, Sheila challenges whether Katie cares about Bill or not since she left him alone in the house. She reminds her that she’s his ex-wife and doesn’t get to tell him what to do after walking out on him. “You had your shot, it’s my time now.” Katie informs her that she’s crazy if she thinks she’s going to have a life with Bill. “You’re not going to stay one more minute in this house.” Sheila vows, “Oh, yes I am.” Katie turns to Bill again and reminds him of the beautiful family moments they had in that house with Will. She pleads with him not to let Sheila poison the memories. Sheila tells Katie she’s not a strong enough woman for a man like Bill. She worked day and night to try and change him. “You’re his past. I’m the woman in his life. So, why don’t you do us both a favor and leave.” Katie tearfully gives Bill a beseeching look. 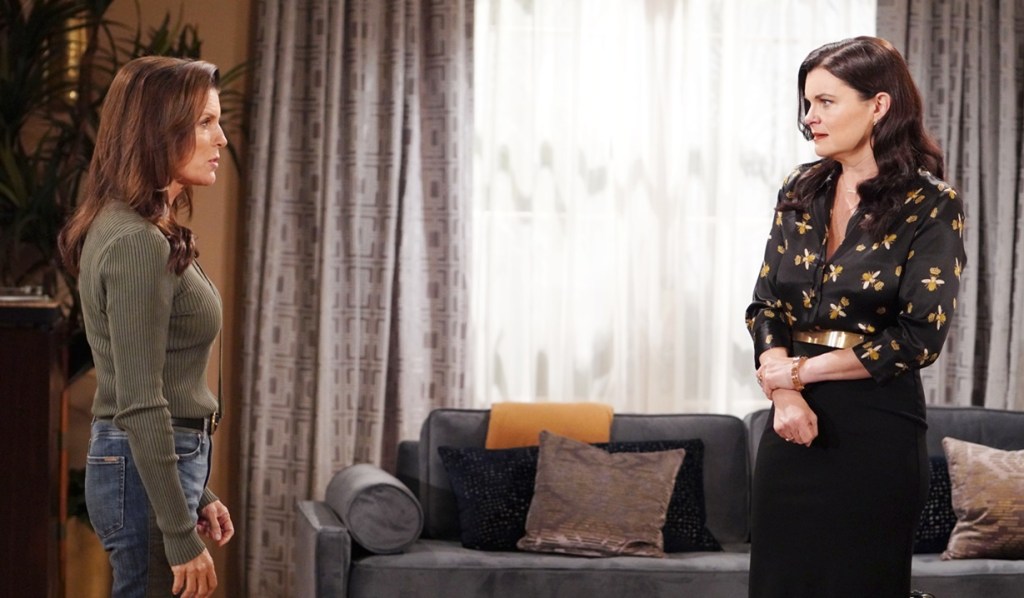 At Steffy’s place, Hope worries about Katie’s safety with Sheila at Bill’s place. “Just wait until my mother finds out about this.” Steffy says Katie understands what’s at stake. “She has to come through for all of us.”

At Bill’s place, Sheila tells Katie she walked out on Bill so can’t make demands. Katie tells Bill she realizes now how much he is hurting. “You don’t have to do this. You are loved.” She implores him to get her out. “She doesn’t belong here.” Sheila fumes that she has no right coming in there telling her to leave. “You’re the one who needs to leave, Katie.” Katie hollers at Bill to tell her to leave. She questions how he’ll explain this to Will, who knows what Sheila has done. Sheila interjects that the boy will just have to get to know the real her and not listen to the gossip. Katie growls, “You are delusional if you think I’m going to let my child anywhere near you. I will die first. And Bill won’t allow it either because he knows deep down what you are.” She pleads again for Bill to make her go and put her back in jail. Bill looks emotional as Sheila prompts him to make Katie leave. Finally, Bill tearfully tells Katie she should leave. Katie gasps, “You can’t mean that. What’s happened to you.” Sheila says he’s finally found love for the first time in his life. Katie walks to the door, turns, sobs, and then walks out. Bill cringes. Sheila wipes his tear away, “I know that wasn’t easy. Thank you, though. I felt heard and understood. For the first time, I really felt wanted and accepted. Most importantly, I feel loved. I feel truly loved.” She kisses Bill and pulls him into an embrace. Bill cries on her shoulder. 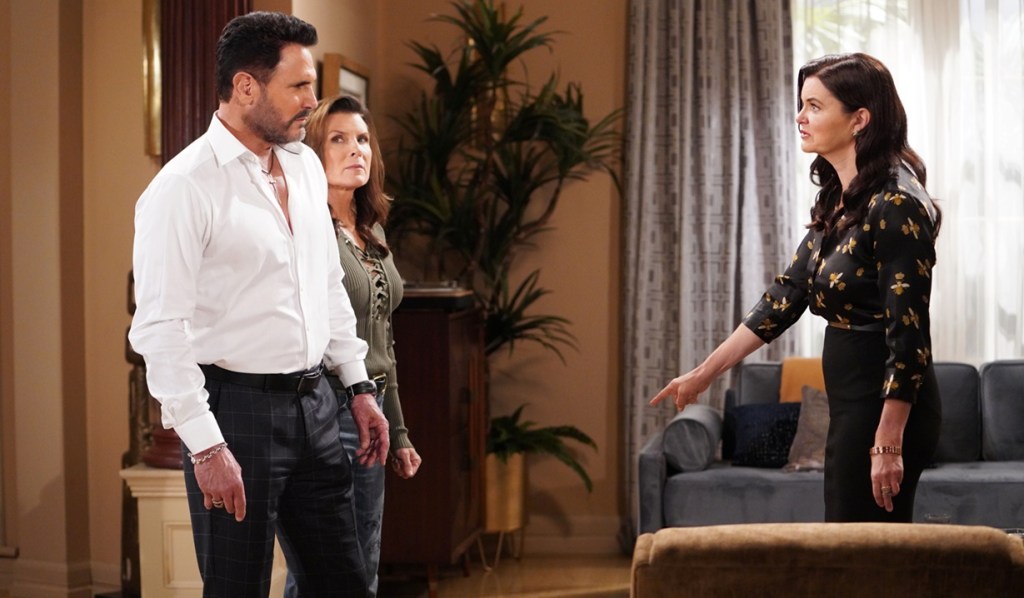 Next on The Bold and the Beautiful: Steffy vows to return Sheila to jail for good, and Bill and Sheila share an intimate moment.

Which Bold & Beautiful character will take aim at Bill Spencer in the gallery below?

<p>She and her former father-in-law go back a long ways. But his devotion to Sheila could convince her that they shouldn’t also go forward… at all.</p>

<p>Although good doctor might find it difficult to commit matricide, he might find it a lot easier to rub out his mother’s enabler and his wife’s onetime lover.</p>

<p>Hey, she already shot Bill once, she was so irate over the speed with which he took advantage of Steffy during a fraught time with then-husband Liam.</p>

<p>As enamored of Sheila as ever, her henchman likely would see cashing out Dollar Bill as the fastest way to clear his own path to the object of his affections.</p>

<p>There’s a thin line between love and hate, and Bill’s advocacy for Sheila just might have pushed his on-again/off-again love right over it.</p>

<p>The dressmaker’s never needed an excuse to want his longtime antagonist dead. But if he did, Bill’s steamrolling on Sheila’s behalf would be a doozy of one.</p>

<p>Having developed feelings for Sheila that he never saw coming, much less becoming so intense, he could view killing Bill as eliminating the competition.</p>

<p>Horrified by what Will’s father has become, Bill’s ex might take a drastic step to ensure that their son doesn’t grow up to follow in his appalling footsteps.</p>

<p>Case closed: Craig could see as the only way out from under Bill’s thumb using his own trigger finger to send him packing to the hereafter.</p>

<p>When Sheila warned Finn’s mother that she’d be back in his and Hayes’ lives before she knew it, she all but taped a bullseye to her loverboy’s back.</p>

<p>Finn’s estranged father might see plugging Bill as a kind of good deed. Of all people, Jack knows full well that the grave may be the only way to escape Sheila.</p>

<p>Just ask Vinny: Liam’s no killer. On the other hand, to protect Steffy and Kelly, Hope’s husband might be swayed to become one.</p>

<p>A longshot, granted. But being persona non grata, he might, in his warped mind, think that offing Bill, thereby dooming Sheila, would buy him redemption.</p>

<p>If Bill’s sister catches wind of what he’s been up to — and with whom — she could put him down for the count in order to ensure the Spencers’ legacy.</p>

<p>Once Bill has served his purpose, would any of us be surprised if the merry murderess added him to her list of victims? Anyone? Didn’t think so.</p> Katie, Taylor and Steffy Try Talking Sense Into Bill as Sheila Declares Herself the Love of His Life