Thursday, December 22, 2022: Today on The Bold and the Beautiful, Ridge updates Eric on his situation, Kelly delights Steffy and Finn, and Carter supports Katie. 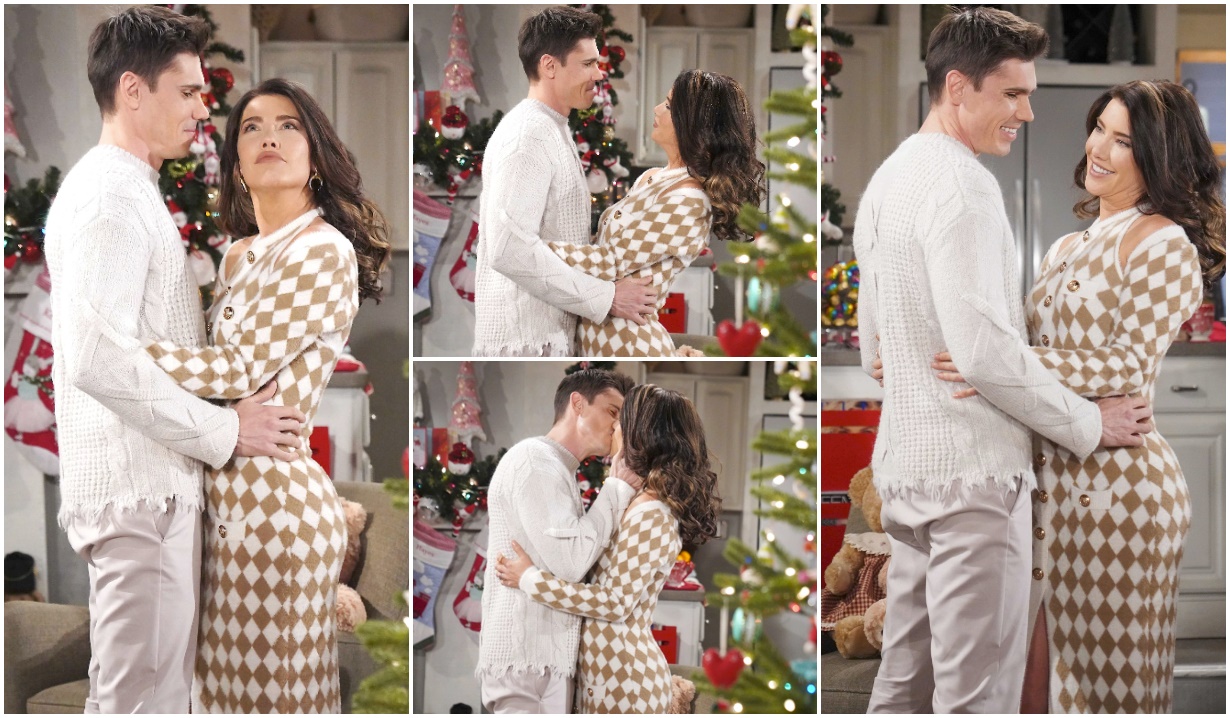 At the Forrester mansion, Eric is going through old Christmas decorations when he finds a candy cane Ridge made as a kid. Ridge comes in and asks, “You wanted to see me?” Eric says it’s important, “Sit down.” They chuckle over the old handmade keepsakes and then Eric tells his son he’s worried about him. He doesn’t want him to feel alone this holiday season.

In Dr. Buckingham’s office, Katie tells the doctor that she shouldn’t have put off her appointment. She rambles that the doctor hasn’t said anything yet… which also isn’t good. Carter points out she hasn’t let the woman get a word in edgewise. Grace just watches them. Katie asks again, “What are my results?” She keeps talking about being on borrowed time as a transplant survivor. Grace finally lets her know that her recent results are all positive. “There are no indications of rejection whatsoever… You’re doing well, Katie.” Katie wipes away tears of relief. 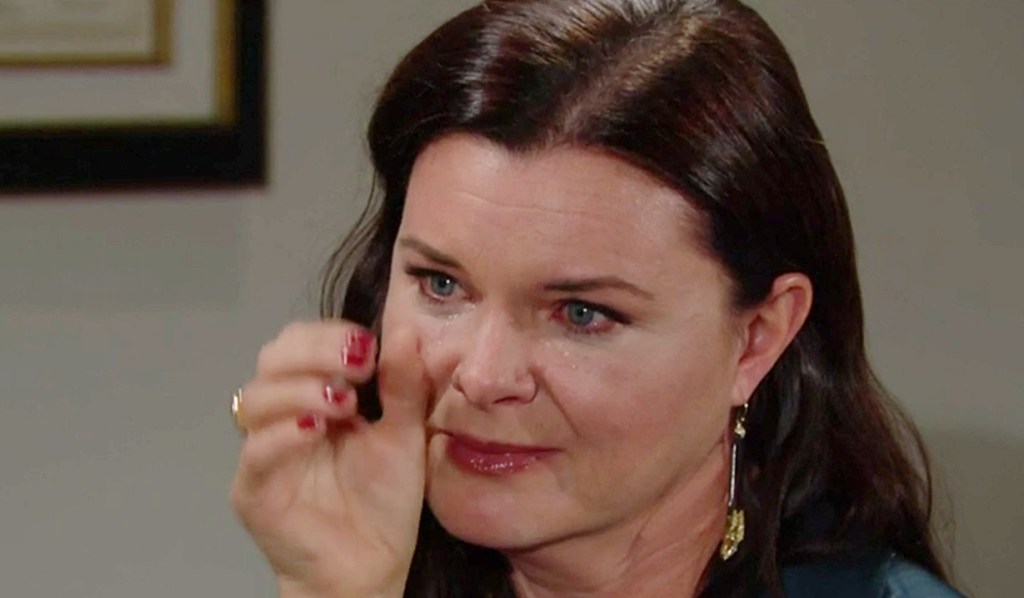 Buckingham tells Katie she’s a walking miracle and she’s glad she has such a good support system. She gets called to a consult and exits. Carter remarks to Katie on her having a clean bill of health for the holidays. Katie was so stressed out about this appointment and tells him how much it means that he was there for her.

At the cliff house, Finn and Steffy smooch. She looks around, wondering where the mistletoe is. Finn doesn’t need mistletoe to kiss his super hot wife. After they make out some more, Finn tells her she did a great job on the decorations. Steffy wonders if it’s a tiny bit too much. Finn says the kids like it and that’s all that matters. They muse about how it’s hard not to get caught up in the holiday spirit with the kids around. Steffy says that would be even truer if the fear of Sheila wasn’t hanging over them. 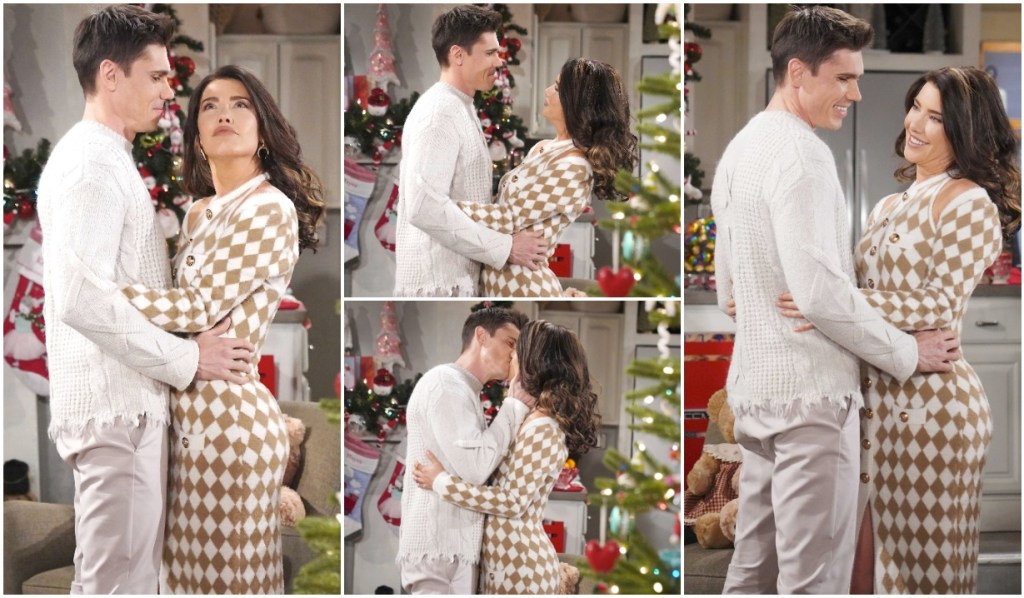 Finn tells Steffy they are all worried about Sheila, but she will be caught. Steffy keep telling herself that one day she’ll be back behind bars, but the police… Finn interrupts. He doesn’t want her worrying on the holidays and vows he’ll always be there to protect her and the children. They embrace. 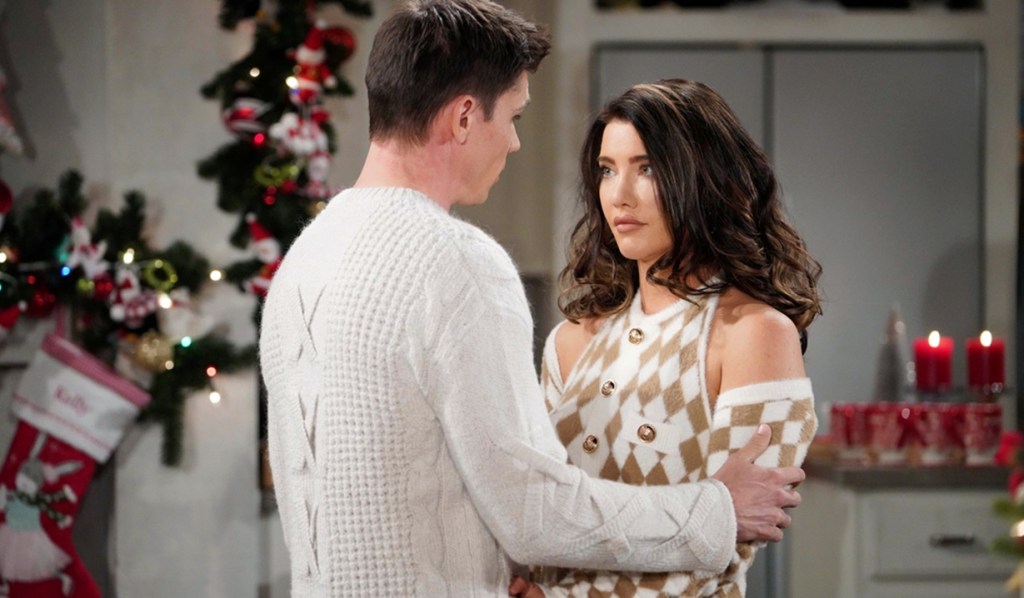 At Eric’s house, Ridge recaps that he took some time off to try and figure out why he did what he did, and maybe what’s next. Eric asks what happened when he, Taylor, and Brooke were all in the room at the same time.

Eric learns that Taylor and Brooke dumped Ridge, who admits he was really proud of them. He does feel untethered, but assures his father he’ll be okay. Eric wants him to make an appearance on Christmas. Just then, Charlie and Pam come in with the fixins for Christmas dinner. They want Ridge to come for Christmas and assure him the whole office knows what happened with Taylor and Brooke — he needs his family more than ever. Eric reiterates that he wants him to make an appearance. Pam understands he may be worried about running into Brooke after she gave him the old heave ho. Eric sends Pam and Charlie to the kitchen, and Ridge questions his dad about Brooke coming for Christmas. Eric explains that Donna’s sisters will be joining them. He’s quite certain Brooke would like to see him despite what’s happened. 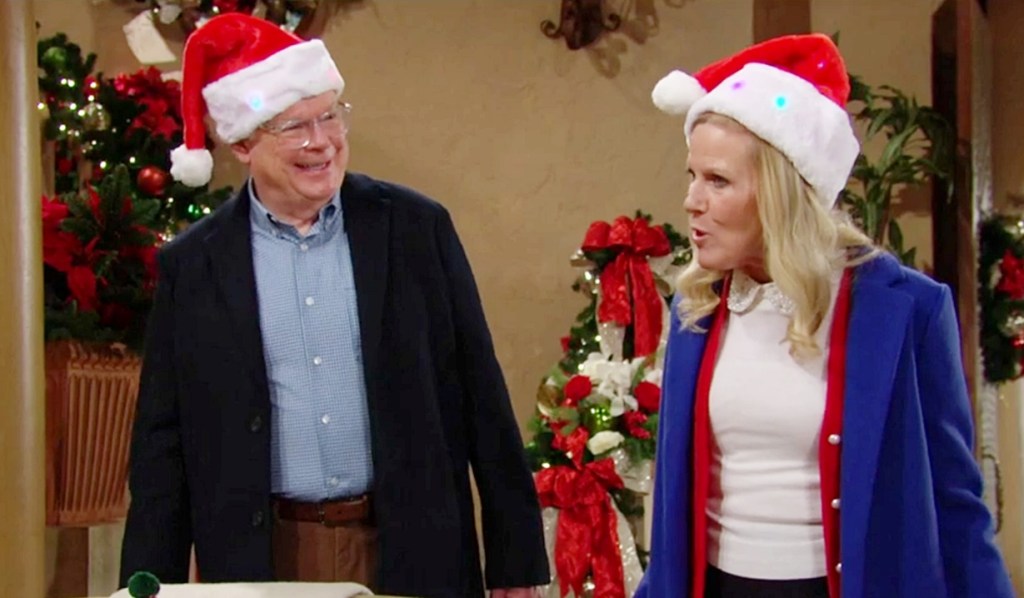 At the cliff house, Kelly grills her mother and Finn about why Rudolph’s nose is read. Finn advises her to ask her dad. Finn wonders what she wants for Christmas. She already has it — all of them together. Steffy croons, “You are so cute,” as they pick Kelly up and hug her.

They take to the sofa to talk about the true meaning of Christmas, though assure the girl she can still be excited about Santa Claus. Finn tickles Kelly, who hopes that Santa got Hayes’ letter she helped him make. They tell she’s been an amazing big sister. Kelly declares that her family is the best and this is the best Christmas ever! 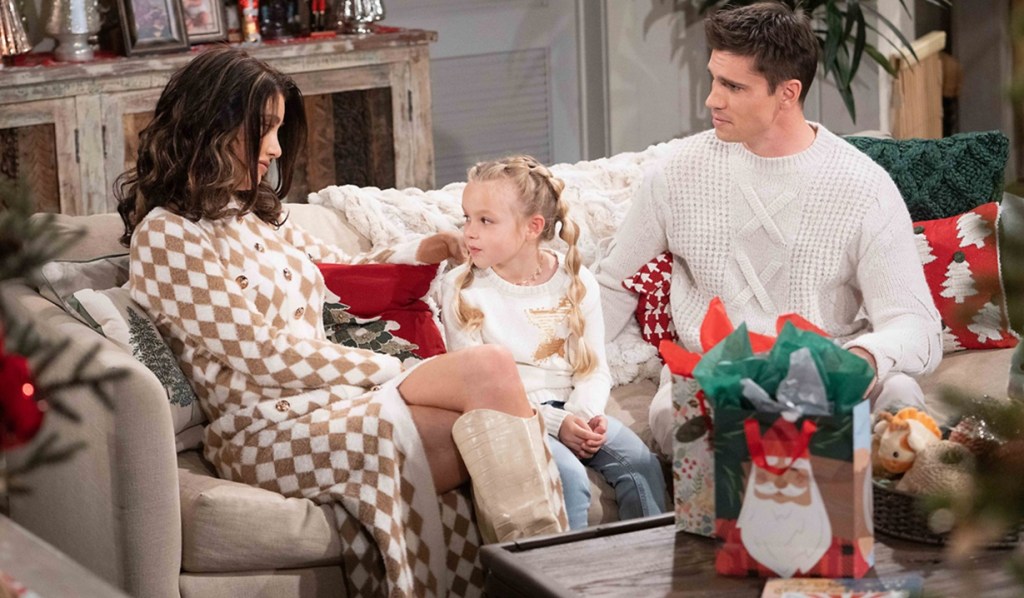 At Forrester, Carter urges Katie to miss her publicity meeting and bask in her good news. She exhales and grimaces. Carter leads her to the sofa and encourages her to relax. “Close your eyes.” Once she has, he tells her to take deep breath, hold it, and then slowly release. She does so, and laughs. Carter assures her she doesn’t have to go through this alone. Whether she’s having good times or not-so-good ones, he wants to be there for her. She’s been going it alone for a while now, and that’s not the case anymore.

Carter says he doesn’t have a jet or a yacht, but Katie assures him those things don’t mean anything to her. She’s been given a new lease on life and will use Storm’s heart to live life to the fullest. “I am going to love fully and completely.” Carter pulls her into his arms and kisses her forehead.

At the Forrester mansion, Ridge tells Eric he’s screwed up over and over again. He puzzles over not being able to choose between Brooke and Taylor. “Why would they put up with that?” Eric says they loved him and still do. Ridge loves them both as well. He has to find a way to change things and be a better man. Eric assures him that regardless, he’s still his old man. They express their love and hug. 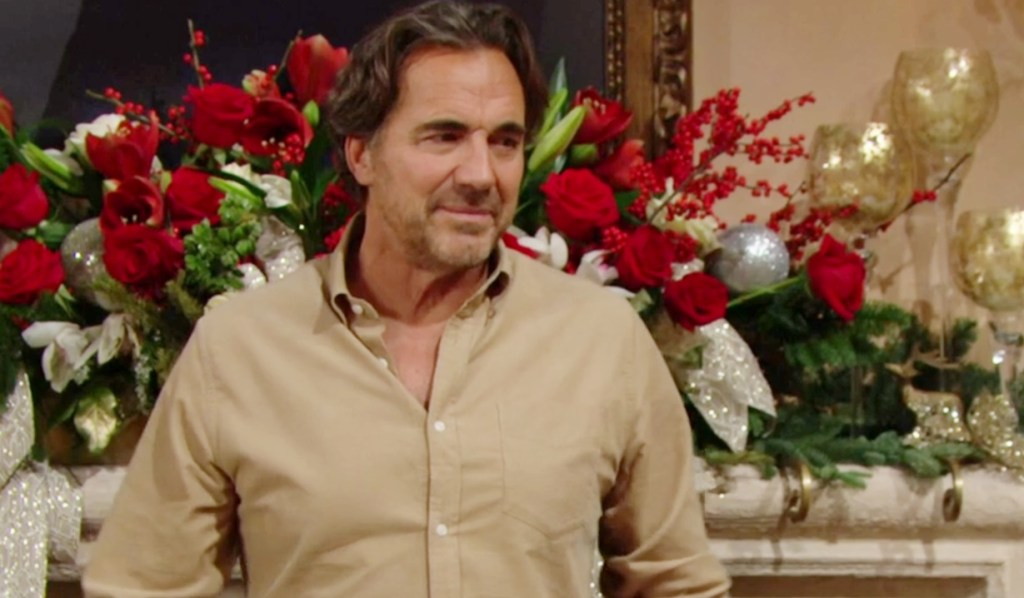 At the cliff house, Kelly’s gone to make Christmas cards and Steffy and Finn canoodle over their egg nogs. Steffy tells him that Kelly is right, it’s the greatest Christmas ever because they’re together. They flash to the miracle in Monaco when they were reunited. “It was truly the best gift imaginable.” Steffy tells Finn she loves him so much and wishes him a Merry Christmas. He strokes her cheek and then kisses her before pulling her to his chest in a hug.

Next on The Bold and the Beautiful: The Logans, Forrester, and Spencers count their blessings on the holiday. 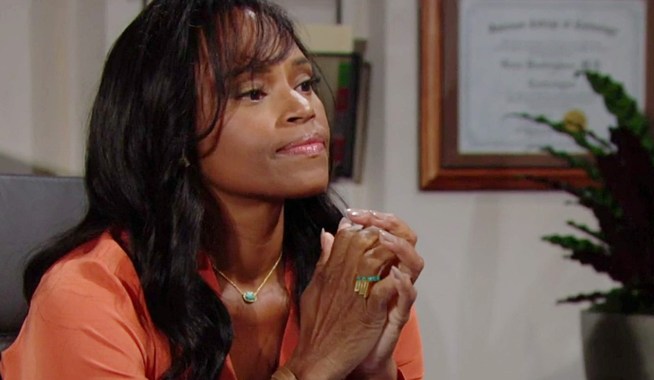 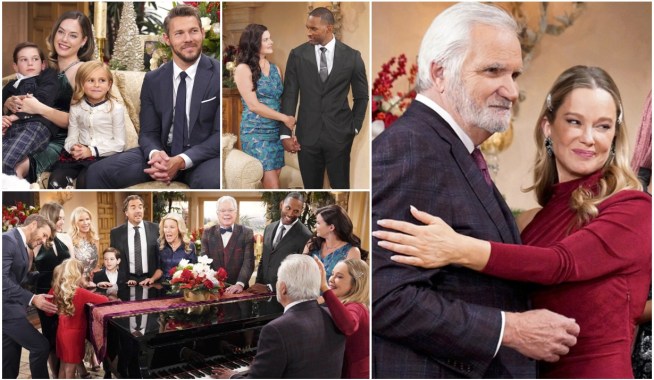