Wednesday, December 21, 2022: Today on The Bold and the Beautiful, Steffy updates Carter and Taylor on Sheila, Brooke gets Katie to open up, and Carter offers support. 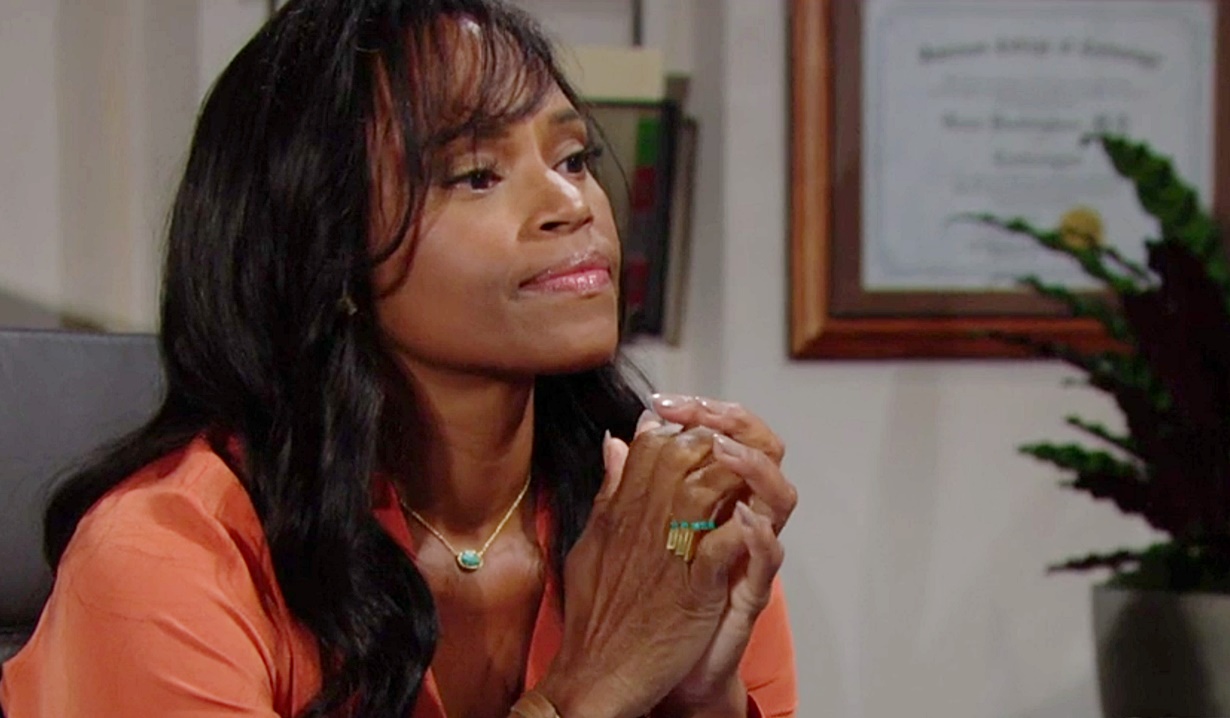 At the office, Steffy is dressed in holiday whites and looking distressed. Taylor arrives, followed by Carter. Steffy breaks the news that Sheila is in Los Angeles. They’re stunned to learn that Steffy saw her with her own eyes. “She’s alive!” Taylor can’t believe this and asks if she tried to come after Steffy. Her daughter says, “No,” and explains she was in a disguise. They learn she accidentally bumped into her. Steffy recognized her from the missing toe and she took off. The police have since confirmed it was her with facial recognition. Underneath the disguise it was Sheila — the monster they all know and fear. 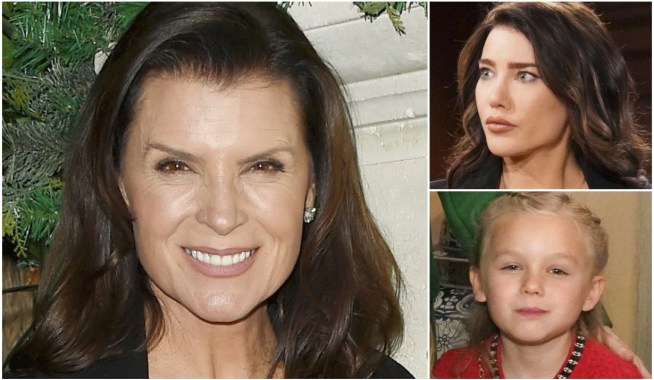 In the design office, Katie and Brooke agonize over the thought of Sheila being on the loose. Brooke doesn’t want to think about it anymore and asks about Bill. Katie worries he’ll go back to his old ways. They go over how he pitched them both on a reunion on the same day. Brooke wonders, “Who would even entertain being with him after that?” Katie will always care about him but that’s as far as it goes these days. “Life is too short to waste time being unhappy.” Brooke notices she is emotional, and Katie confesses she has a cardiology follow-up she has put off. Her sister wonders if she was scared to go. 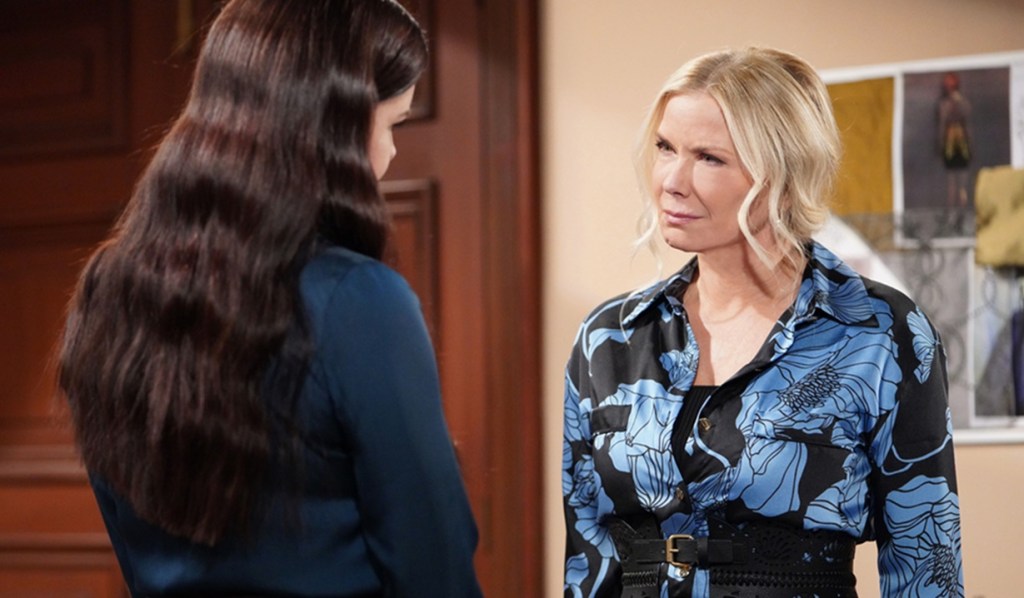 Katie insists she’s fine; she’ll go to the check-up and listen to whatever the doctor says. It just brings up a lot for her. Brooke can see she’s stressed out and wants to accompany her. Katie insists she can go on her own, but explains it takes her back to being in the hospital and what Storm did so she could live. “It’s a miracle. But we all know that I’m living on borrowed time.” 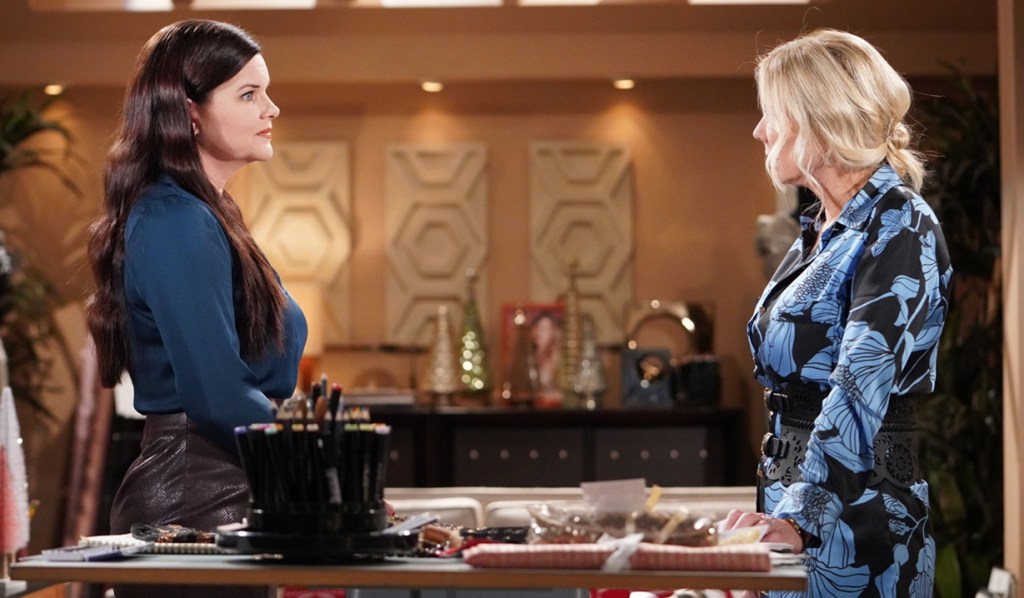 At Forrester, Carter marvels that Sheila’s been around this whole time in a wig and mask. Taylor fumes that she could have hurt any of them. Steffy adds, “Or Hayes!” Taylor hopes the police have leads. Steffy tells them about the police chase and how Sheila escaped. “We have to stay vigilant. Sheila is out there.” She warns the police think she’ll stay west of Beverly Hills. Taylor sighs — that’s where most of them live. Steffy thinks she’s an idiot for staying in Los Angeles. They’re going to find her and put her behind bars for the rest of her miserable life!

In the design office, Brooke puts her hand on Katie’s heart and tells her how proud Storm must be of her — she brings so much joy and light into the world. She’s sorry her sister has had to go through all of this. Katie will focus on the holidays and being with the people she loves once this doctor’s appointment is out of the way. Brooke offers to go with her again but Katie declines. They embrace. Brooke expresses her love and tells Katie she’s a very special person. “You deserve to live. And you will.” She wipes Katie’s tears away. 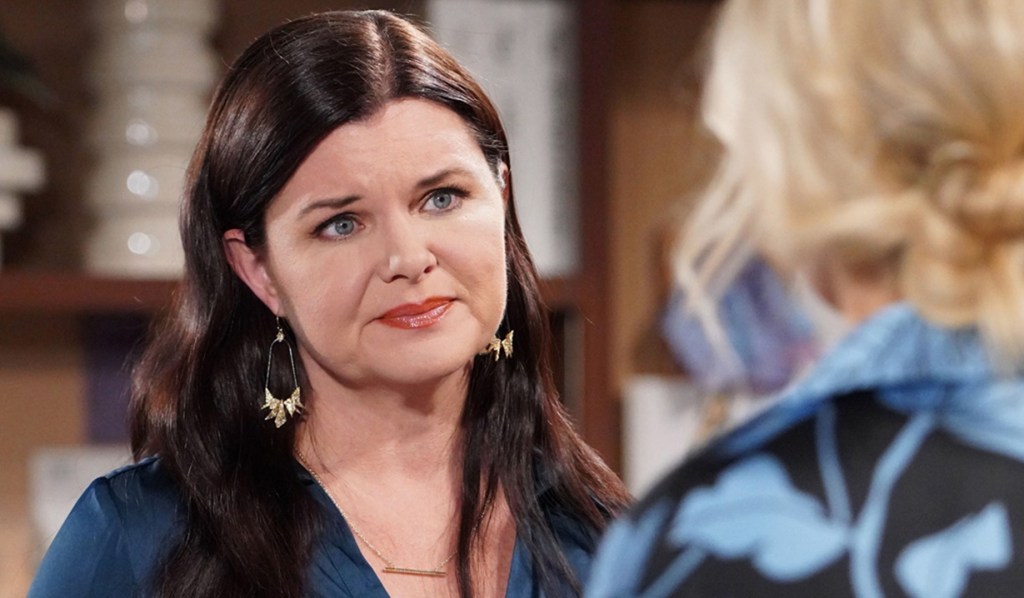 Alone in the design office, Brooke greets Carter when he comes in and asks if she’s seen Katie. Brooke tells him she’s probably still at her doctor’s appointment. She realizes he didn’t know about it and explains it’s her annual, regarding her heart transplant. “She’s just scared. She never knows how the test results are going to come back.” Brooke says she wouldn’t let her go along. Carter doesn’t think she should be by herself. Brooke agrees. 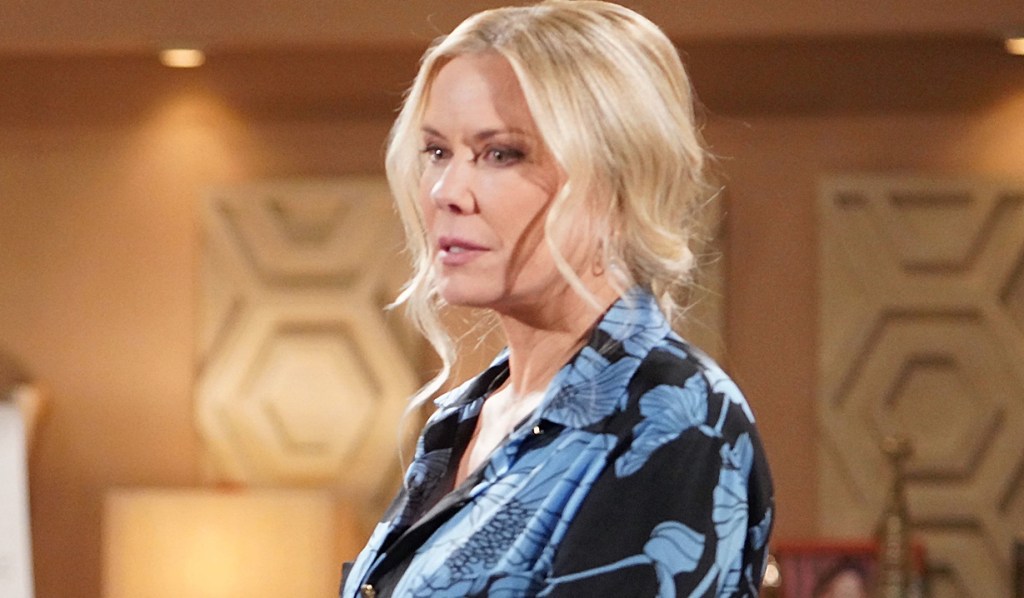 In the doctor’s office, Katie frets and paces. Dr. Buckingham’s nurse comes in and warns her the doctor is running behind and will be with her shortly.

In the Forrester office, Taylor and Steffy worry about what Finn must be going through right now. They assure each other that she’ll get caught and this will all be over soon. Steffy changes the subject to her mother’s love life. She wanted her with her dad but not at the cost of her self-worth. They giggle about her and Brooke being on the same side. Steffy wonders what’s going through her dad’s mind. Taylor will always love Ridge but it was good to love herself more. She and Brooke agreed it was time for them to be role models. Steffy clucks that she’s always been a great role model — she was the one who pushed her. “I’m so sorry.” Taylor feels there was nothing wrong with wanting her parents back together. Steffy worries she should have waited for Taylor to tell Ridge about Thomas when she thought the time was right. Taylor shakes her head and reassures her she did the right thing. Steffy says she’s proud of Taylor and Brooke, and tells her mother there’s nothing she wouldn’t do for her.

In the doctor’s office, Katie flashes to her heart transplant and Brooke encouraging her to live her life to the fullest. The door opens and she’s shocked to see Carter walk in. He explains that Brooke told him about her appointment. Katie says she’s a big girl and doesn’t want him feeling sorry for her. Carter doesn’t feel sorry for her; he’s in awe of her. She’s given so much to everyone else, now she should let him be there for her. “You can lean on me, I won’t break.” Just then, Dr. Grace Buckingham walks in and gawps, “Carter.” Katie hopes it’s not a problem that he’s there for support. Grace says, “Paris has moved on and so have I.” Katie asks if she has her test results. Grace says she does. Katie takes Carter’s hand and tells her, “Go ahead, doctor. Tell me what my results say.” 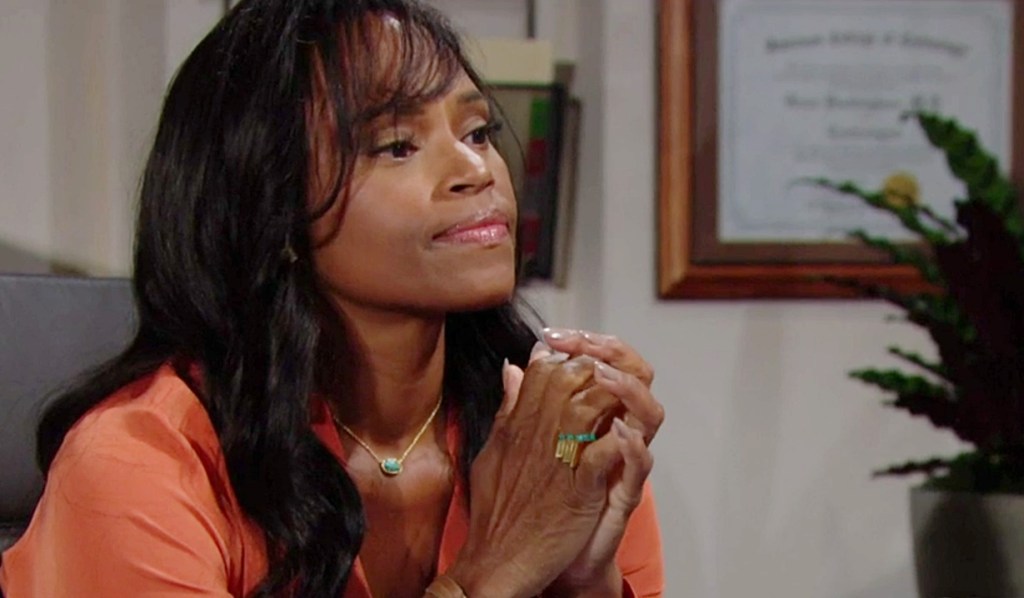 Next on The Bold and the Beautiful: Ridge updates Eric on the events since his return to L.A., and Steffy and Finn dive into the holiday spirit despite everything happening with Sheila. 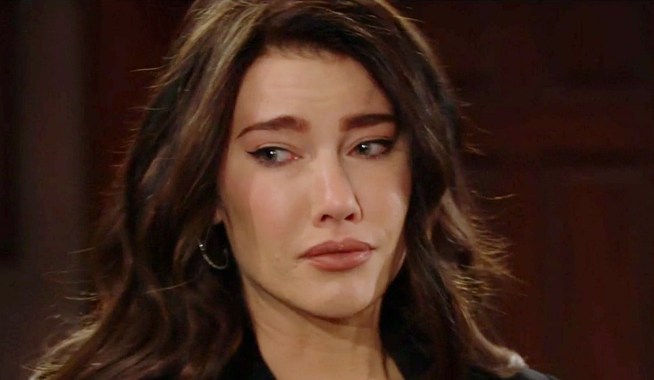 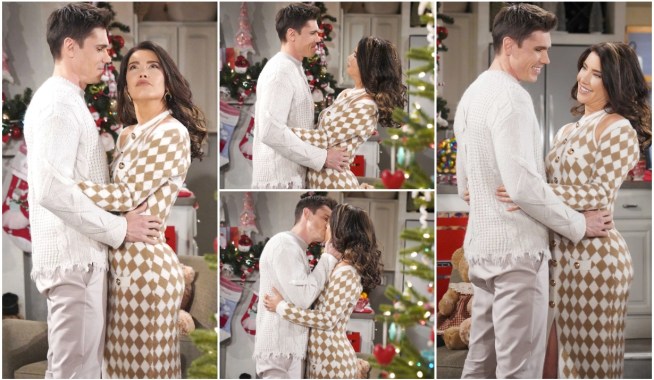