Tuesday, December 6, 2022: Today on The Bold and the Beautiful, Thomas learns his son doesn't want to see him, Finn examines Sheila's toe, and Sheila dons a new disguise. 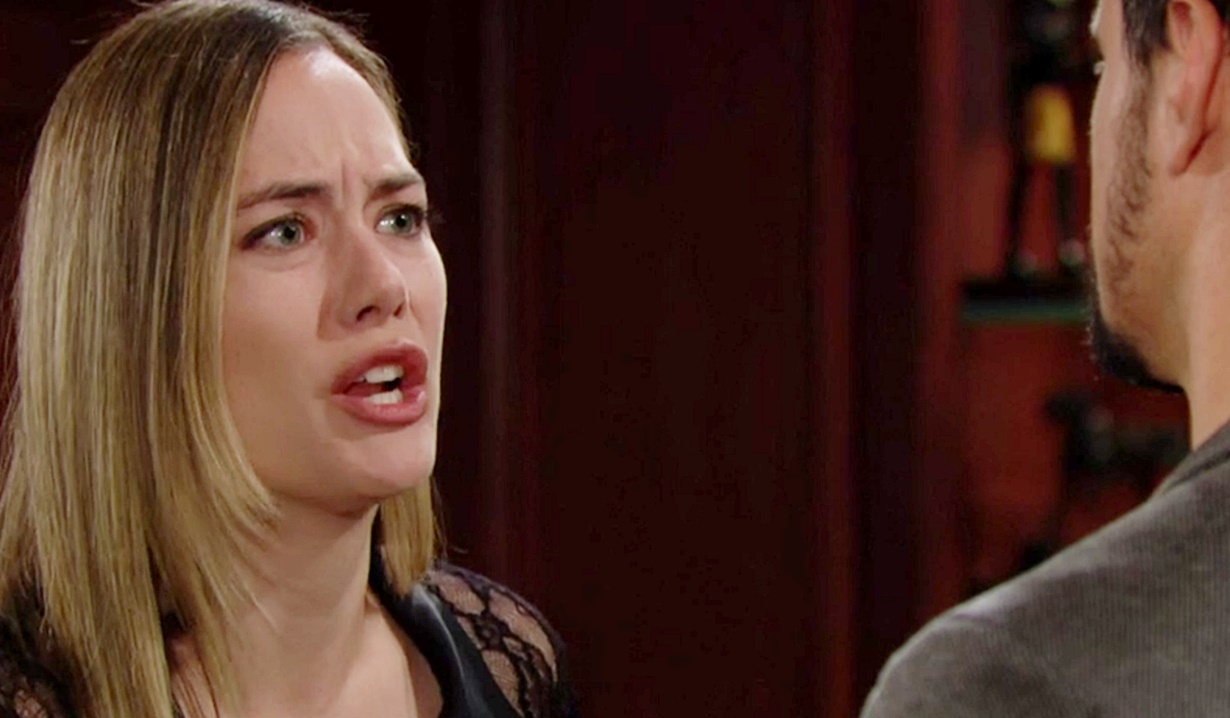 In Finn’s office, he tells Steffy that Sheila’s death never felt right — it was too convenient. He thinks she faked her own death, and this toe could prove it. Steffy reminds her husband the authorities looked into this already. Finn feels if she was actually killed by a bear, they’d have found more than a toe. He wants to take a look at it, as it doesn’t look to be the result of an animal attack. Steffy asks, “You really think Sheila Carter cut off her own toe.” Finn recalls, “You always told me she was capable of anything. She knew that we would never stop looking for her. Faking her own death was the only way out.” 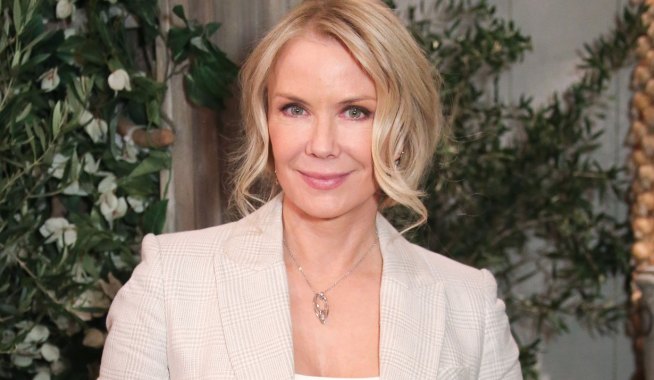 As Bold & Beautiful's Katherine Kelly Lang Cheers That 'Brooke Is Standing Up for Herself,' One Question Begs to Be Asked

At Forrester, Hope asks Thomas how he can show his face around there after what he did. “You really are shameless, aren’t you?” She asks if Thomas has anything to say and he counters, “Are you willing to listen?” Hope informs him he’s lucky she’s even speaking to him. “I believed in you, Thomas. Our son believed in you.” Thomas pleads, “Just let me explain.” Hope wonders why she should; all he’s done is lie. They get into it over Brooke making his family suffer. Hope points out his family is suffering now, because of him. Did he even think about how hard it was for Steffy to stop her parents’ wedding? Hope calls him out for sabotaging her mother’s marriage and using their son. Thomas never wanted Douglas involved, and with his dad and her mother n not being together, Deacon could have… Hope tells him to stop. Thomas insists he was trying to do something good and pleads with her to hear him out. He can handle anything but their connection falling apart, or his relationship with his son. 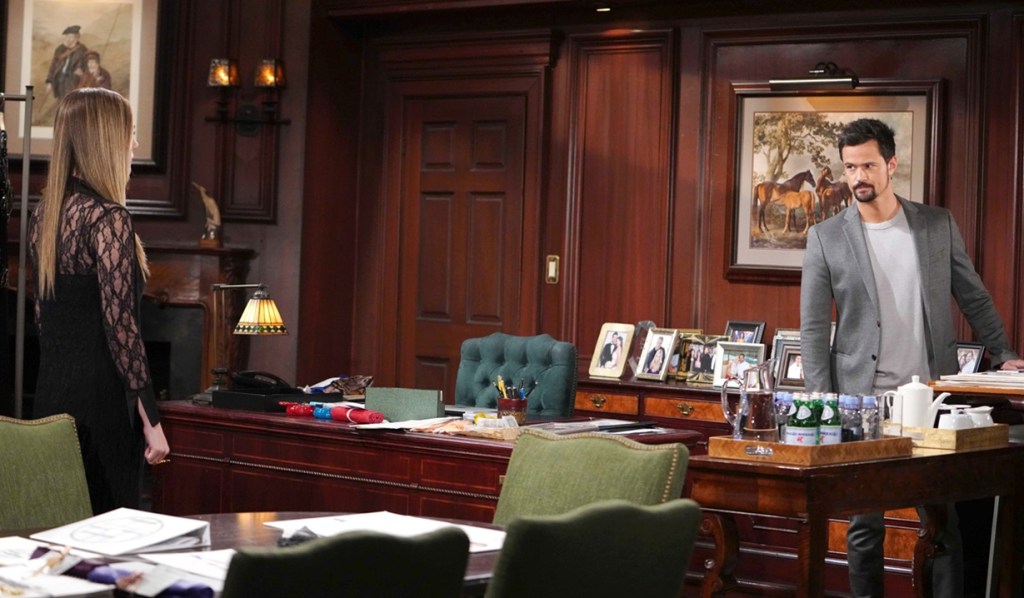 At Deacon’s place, he insists Sheila needs to face facts and tries to convince her to turn herself in. She says, “Absolutely not.” Deacon grits that she’s going to get caught and take him down with her! Sheila realizes he’s concerned about himself and not her. Sheila turns seductive and tells Deacon she won’t give herself up. She didn’t cut her toe off so she could spend the rest of her days limping around a jail cell.

In Finn’s office, he puts the toe under a microscope. Steffy asks, “It doesn’t bother you? It’s your birth mother’s toe.” Finn reminds his wife that Sheila shot them both — if she’s out there they need to know. Steffy agrees. Finn looks into the microscope. Steffy asks if his hunch is right. Finn turns to her, “I’m positive. There was no attack. She did this to herself.” Steffy gasps, “Sheila’s alive.” 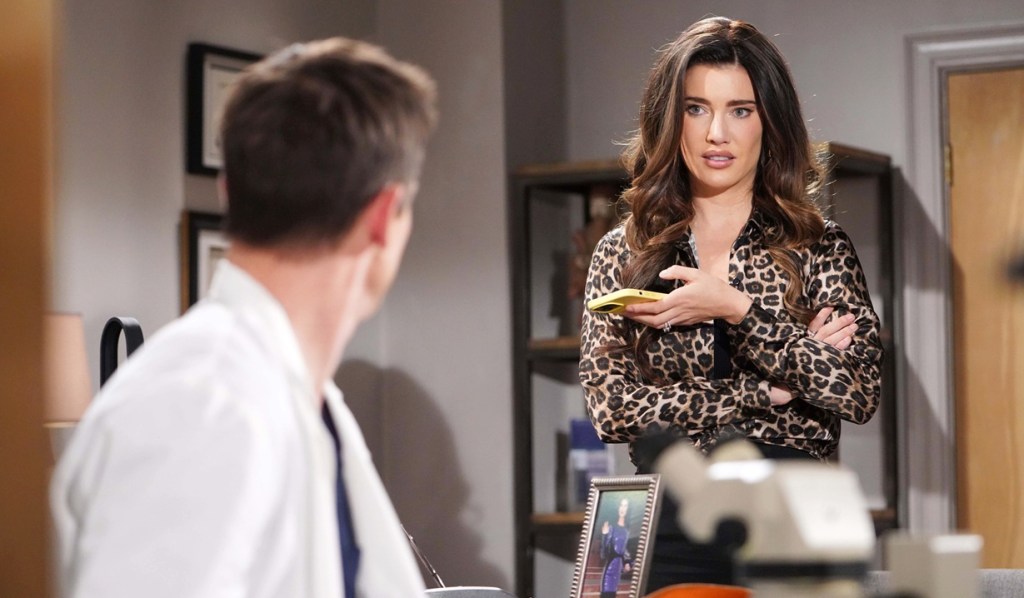 In the Forrester office, Hope calls what Thomas did “heartless” and he argues the point. She rails about the CPS call. “Douglas was questioned, and he could have been taken away.” Thomas argues again. Hope says the point is that the call never should have been made and he should never have asked the boy to lie again once he found out the truth. “Now he doesn’t even want to see you anymore.” Thomas doesn’t believe it, but Hope says it’s true and it’s his doing. “All he wanted was a relationship with you, Thomas. He loves you, and you are the one destroying that.” Thomas starts blaming Donna and Hope screams, “Stop, Thomas! This is on you! You were the one who put him in the middle of this!” Face flushed with angry tears, Hope tells Thomas that sometimes she doesn’t even understand how Douglas can be related to him, because he is nothing like him. Douglas is brave, compassionate, and he is not afraid to tell the truth, unlike Thomas whose first instinct is always to lie. Hope grimaces and grips the back of a chair. “I can’t believe I ever trusted you again.” 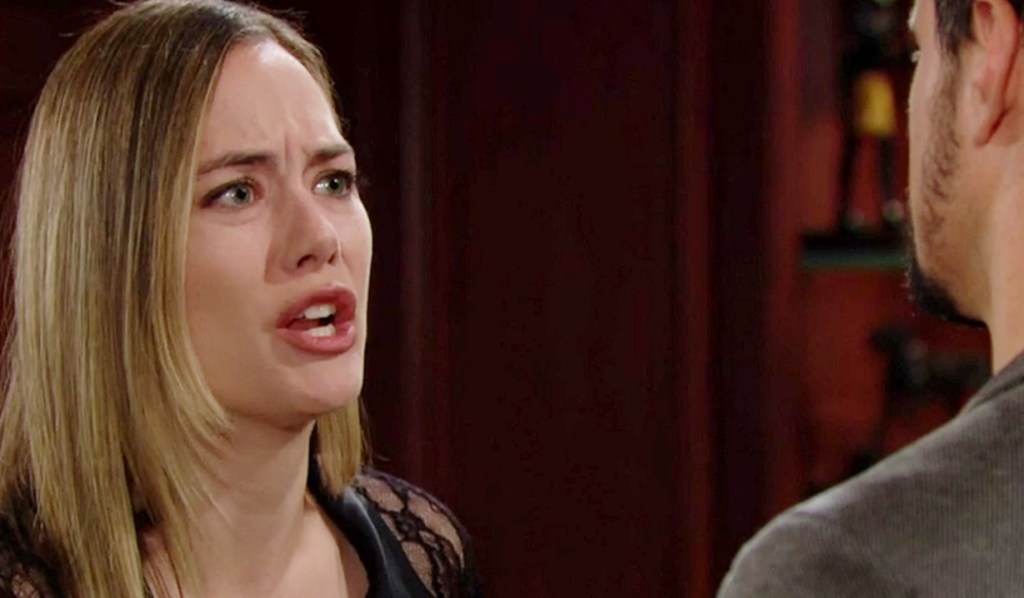 At Deacon’s place, Sheila complains about the agony she went through in cutting her own toe off to stay out of prison. She will not turn herself in. Deacon slams down his beer bottle and tells her it’s the end of the line; there is no way out. She argues but he yells, “There is no way out!” He’s sorry, but it’s time.

In Finn’s office, he speaks to a colleague on the phone who agrees the toe wasn’t lost in an animal attack. He invites Steffy to look at the toe under the microscope. “She amputated the toe and tried to make it look like a bear attack.” Steffy exclaims. Finn states this only proves how truly diabolical she is. 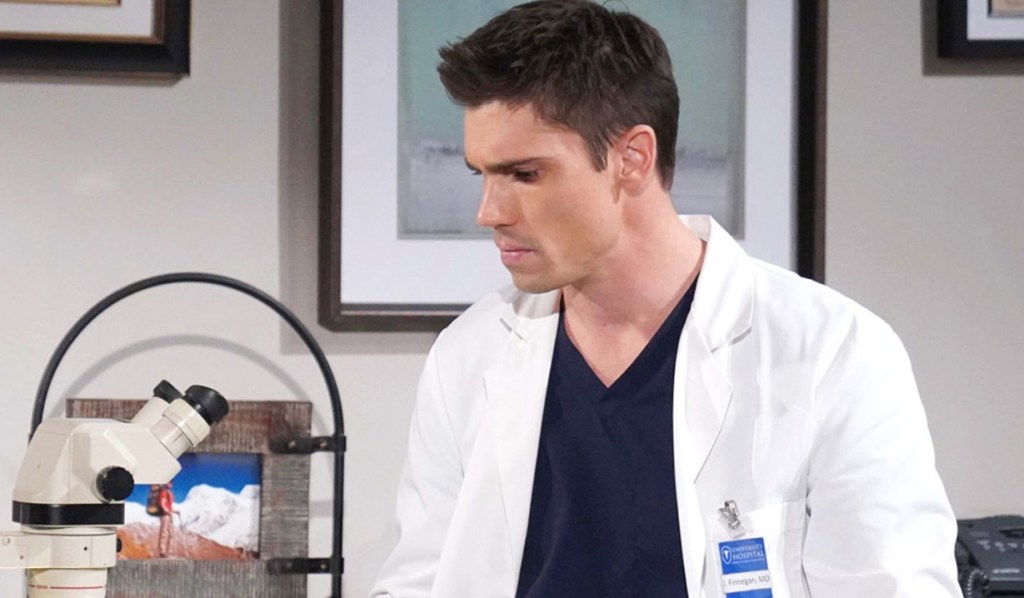 At Forrester, Thomas tells Hope their connection is real. Hope says if it is, he used it against her. “I put my faith in you.” Thomas says she gave him a chance to prove himself and he did. Hope counters that he threw it away; Liam and her mother were right about him all along. Thomas asks Hope not to give up on him. Hope wonders how he can even ask that after all he’s done. She could have maybe stopped all this heartache if she has trusted herself. “I let my guard down, I did. And then you tried to kiss me. You crossed a line.” Thomas doesn’t want to talk about it and insists it wasn’t a horrible thing. Unlike other men, he can only love one woman, and he loves her. Hope moved in close and says, “And I love Liam. Never you. Especially after this betrayal.” She can’t even fathom working with him now. He asks her, “Please don’t say that.” All Hope sees is a sad, pathetic man who kept her from Beth, who didn’t care about his son’s safety so he called CPS on himself. She walks out as Thomas protests. Once alone, he whispers, “You didn’t give me a chance to explain.”

More: Honoring a legend on a crushing day

At Deacon’s place, Sheila’s in her prosthetic mask and has her hair up in a wig cap, ready to head out the door. Deacon asks where she thinks she’s going and warns that disguise isn’t going to save her. “You’re time is up.” Sheila fumes, “Never!” and storms out the door. 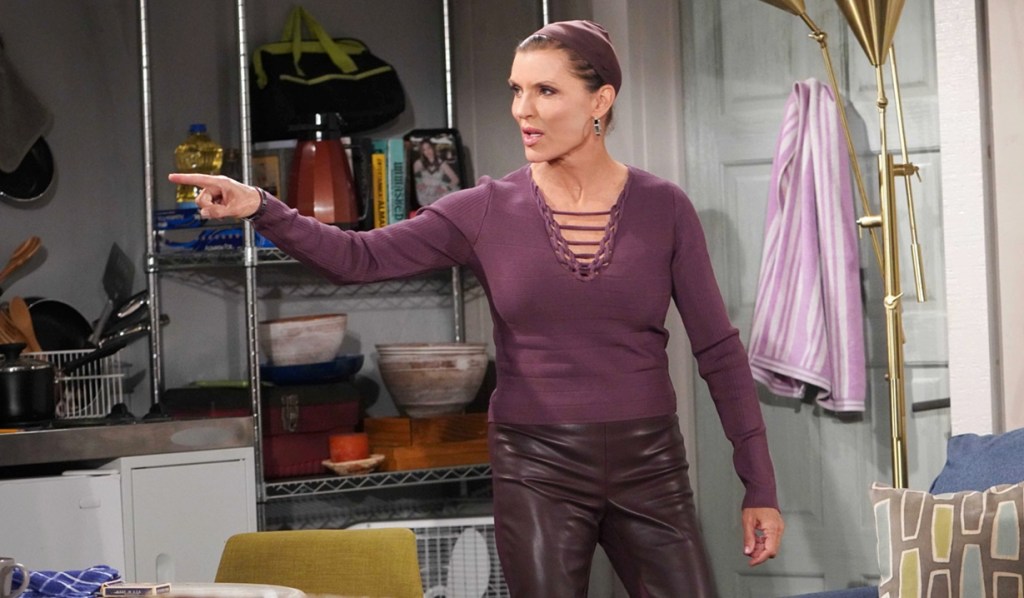 At Finn’s office, Steffy panics. “What are we going to do!” Finn tries to reassure his wife. “We’re onto her now. If she thinks she’s gotten away with this that gives us the upper hand.” Finn vows he will not let this go. “I will find Sheila Carter and she will go to prison for the rest of her life!”

More: Flo has been found!

Outside Deacon’s place, Sheila tucks her hair into a blonde wig and smiles, “There’s always a way out.” 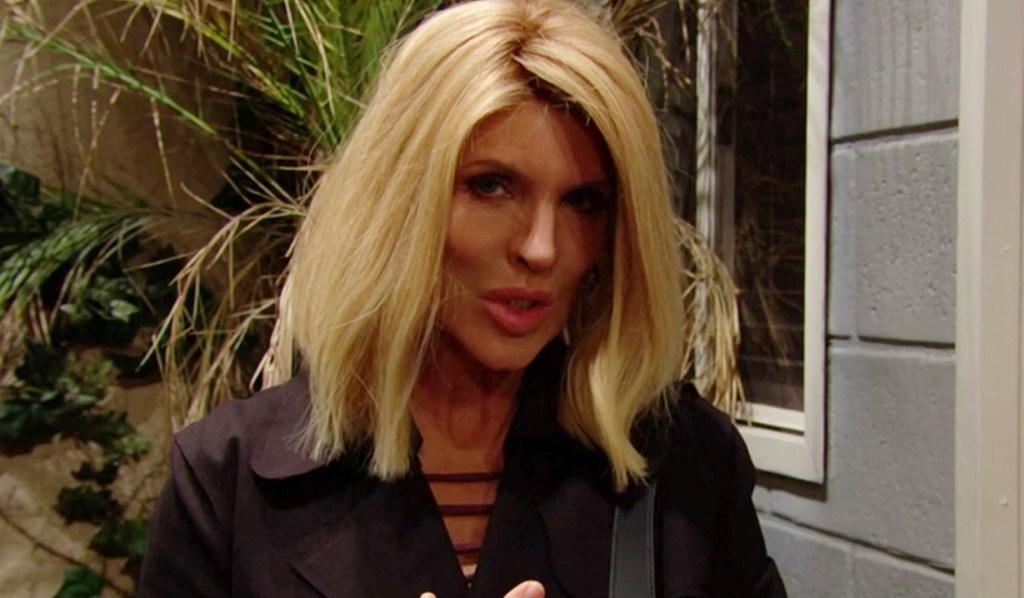 More: The big problem with Brooke’s declaration to Ridge

Next on The Bold and the Beautiful: Finn’s detective work alarms Steffy, and Bill makes a bold move from his old playbook.

Look back on Hope and Thomas’ fashion show in the photo gallery below. 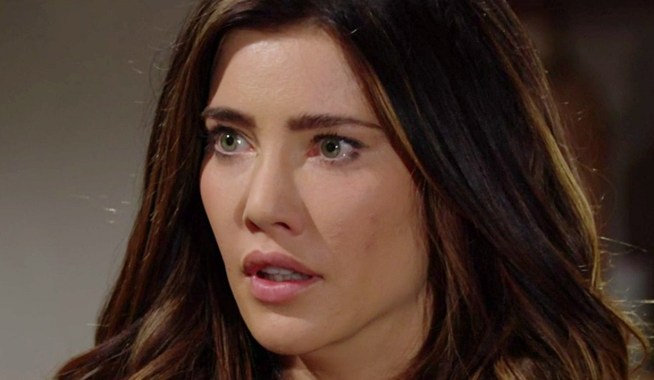 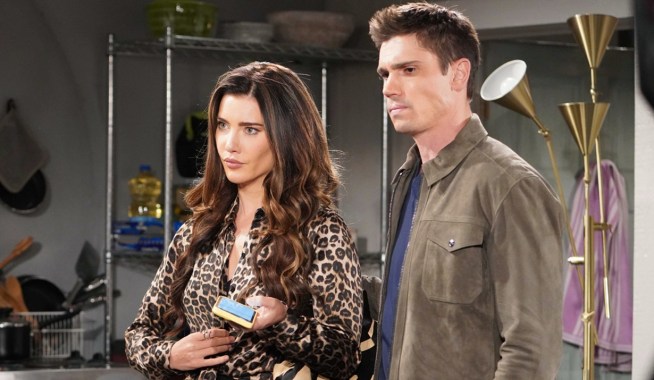