Tuesday, November 22, 2022: Today on The Bold and the Beautiful, Katie gives Bill an answer, Brooke agonizes, and Steffy defends Douglas. 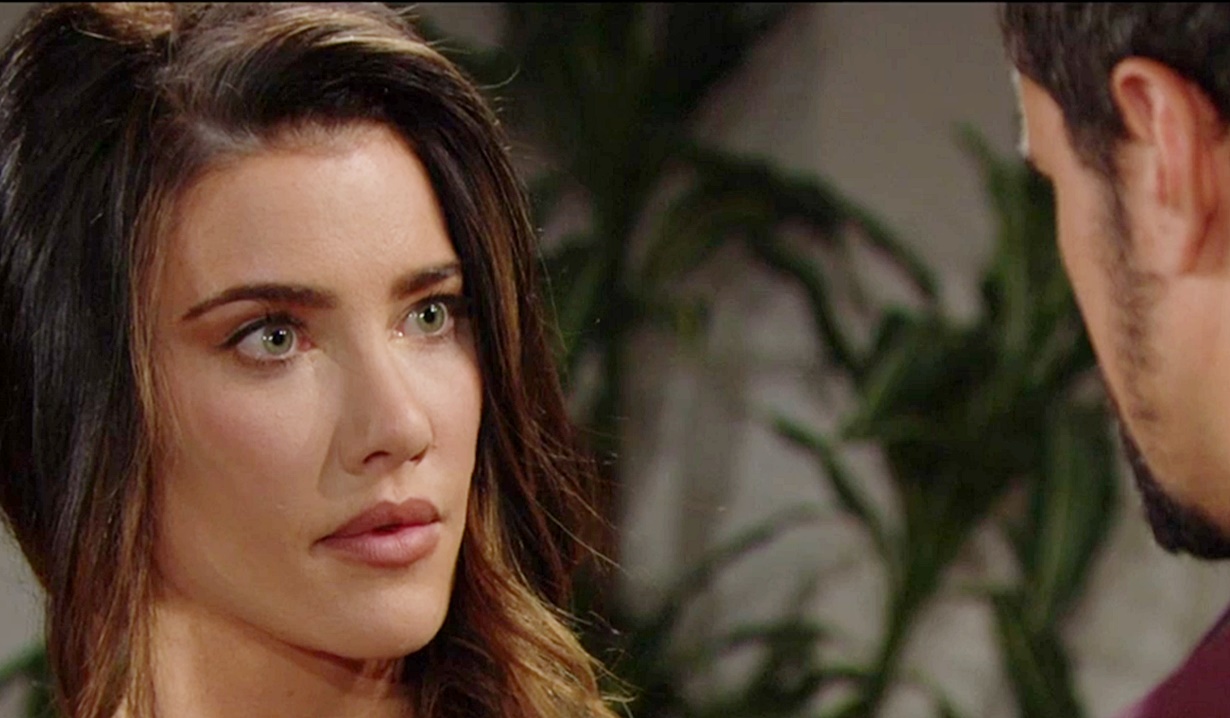 In his room at the Forrester mansion, Douglas is worried his dad will be angry. Steffy reassures the boy and they go over Thomas using his voice app to frame Brooke for the CPS call.

In another room, Taylor tells Thomas that Ridge told her Brooke making the CPS call had nothing to do with them reuniting and she believes him. Thomas assures her that his dad loves her, and this has nothing to do with Brooke. Taylor is so proud of how her son has turned his life around. Thomas tells his mom she’s helped him so much; if he can ever return the favor, he’s there for her. They embrace. 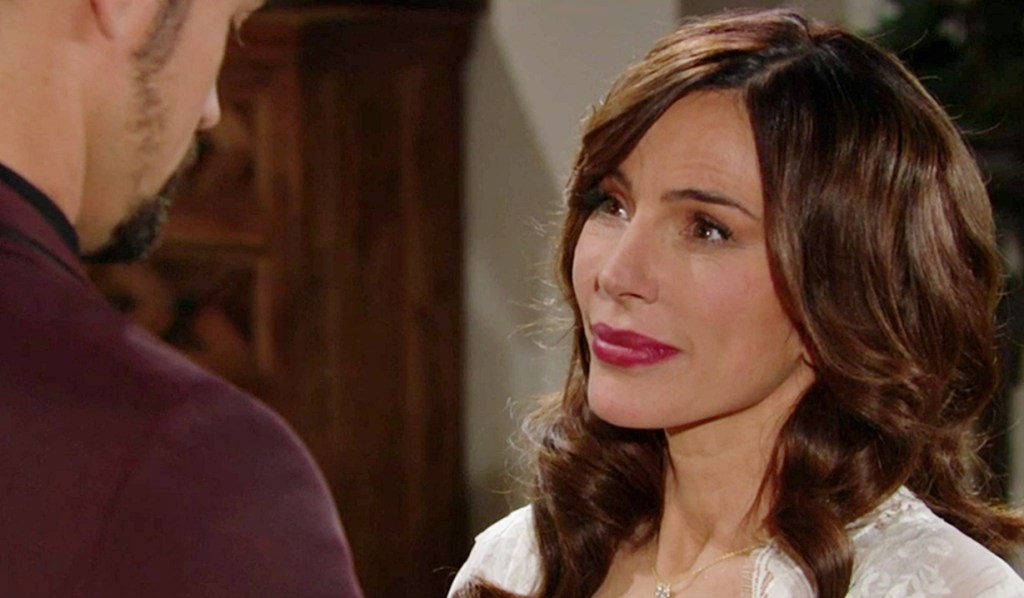 In the living room, Eric says he will support Ridge’s marriage to Taylor but notes if it were Brooke, he’d support him a tiny bit more. Is he sure he wants to marry Taylor? Just then, Finn and Li arrive with Kelly, who runs over to Ridge. Finn takes Kelly to the kitchen and Li congratulates Ridge.

In Brooke’s living room, Carter’s in disbelief as he hears Bill tell Katie that she’s the only one he wants. “Come back to me, my Katie.” Katie tells Bill she knows he came straight over there when Brooke got back from Aspen. She can read the situation and realizes he’s there trying again. She guesses Brooke turned him down. Katie cares about him and always will. Katie rhymes off all the things they’ve been to each other and tells him she loves the father he’s become. She wants him to be happy and she wants to be happy too. He can’t make her happy because he’s not happy. Katie knows she deserves a man that she can look in his eyes and know she’s the only woman in his heart. “That man’s not you.” Katie goes upstairs to check on Brooke. 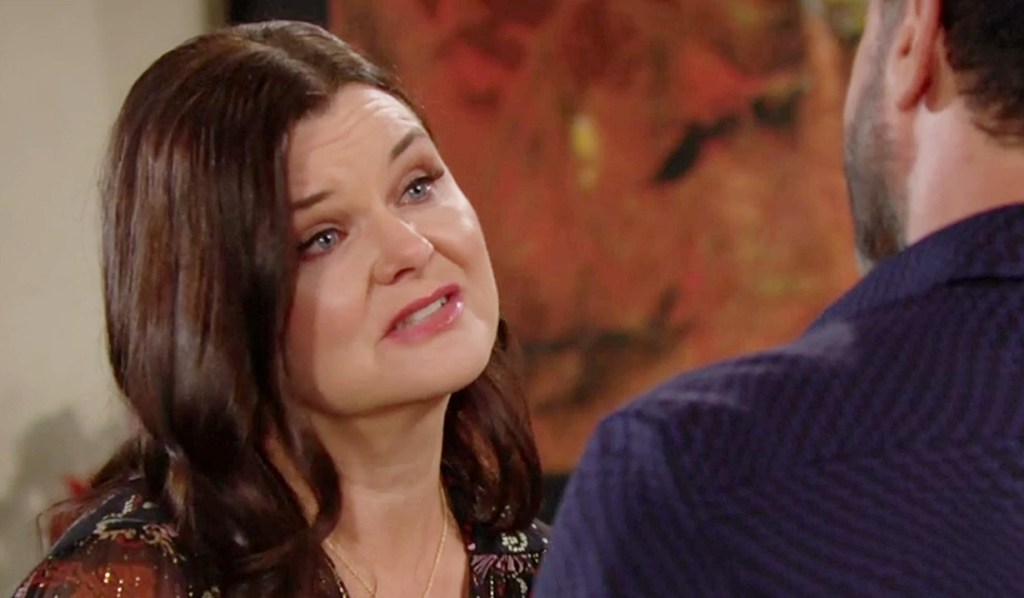 Bill is rubbing his eyes when Carter walks in and fumes, “Are you kidding me? What you said to Katie just now right after saying the same thing to Brooke? Thank God she turned you down. Katie deserves a lot better than you.” Bill sneers, “Well, well, well, if it isn’t Mr. Nuptials-R-Us.” Carter rants that Katie is an extraordinary woman. Bill wants to know what it is to Carter, then realizes that he’s interested in her. Bill barks at Carter to stay away from Katie. Carter says he has no right to ask that and reminds him what he was promising Brooke. Bill doesn’t care what he was promising Brooke, Katie is his ex-wife, the mother of his child, and she is and will always be his Katie. 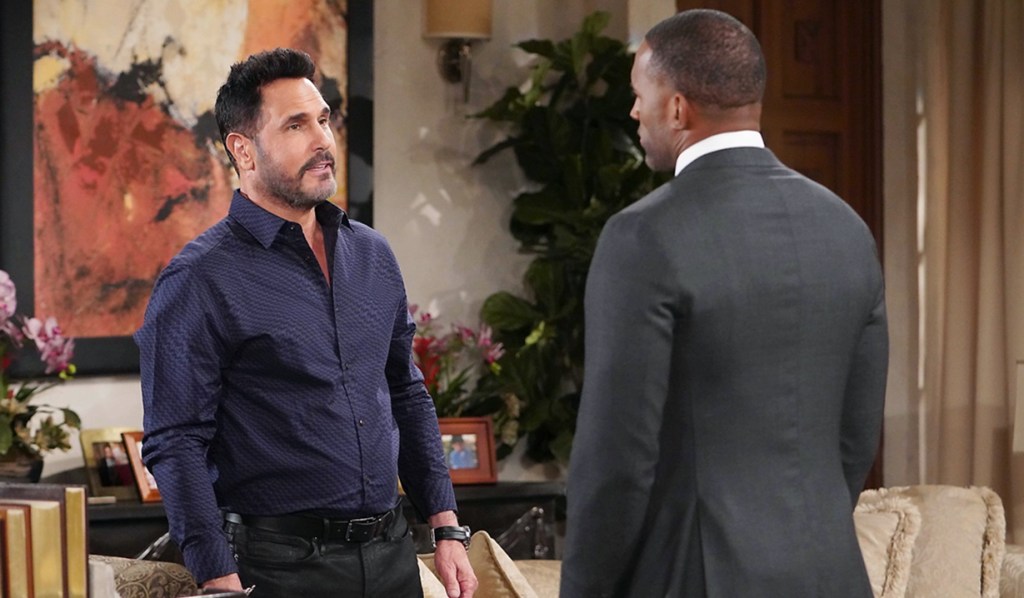 In Douglas’s room, he tells his Aunt Steffy that what his dad did isn’t right. Steffy agrees; it’s not. She tells the boy not to worry about his father — she’ll take care of him. 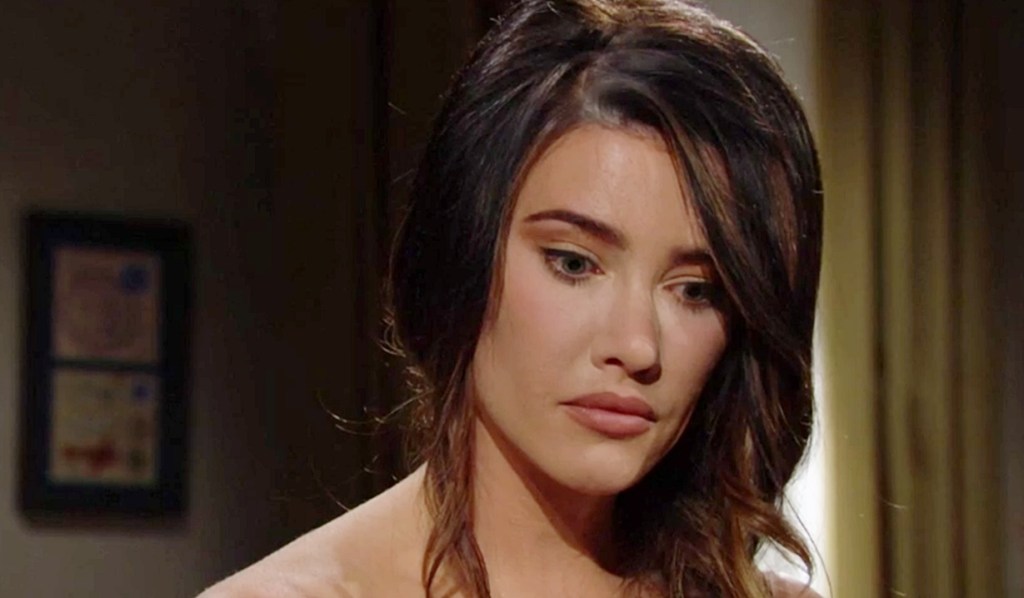 Li joins Taylor in the upstairs bedroom where she’s getting ready and hopes she’ll enjoy her ceremony and reception with no nasty surprises like what happened to Finn and Steffy. Taylor agrees, there will be no nasty surprises and says today is going to be perfect.

In the living room, Finn listens as Ridge tells Eric that Carter went to Brooke’s to get his cufflinks. Thomas appears and warns his dad that his mom is going to take his breath away when he sees her. Ridge is sure she will. Thomas asks about Steffy and looks wary when he learns she went to check on Douglas.

In Douglas’ room, he and Steffy listen to the CPS call on the voice app again. She marvels that it sounds just like her. The boy says, “But it isn’t.” She gets him to play the original in Thomas’ voice again. As they’re listening, Thomas walks in. He sighs, “Douglas.” The boy hides his phone and Thomas closes the door. He asks his son, “What have you done?” Steffy jumps up to confront her brother and says, “No, Thomas. What have you done? How could you be so cruel?!?” 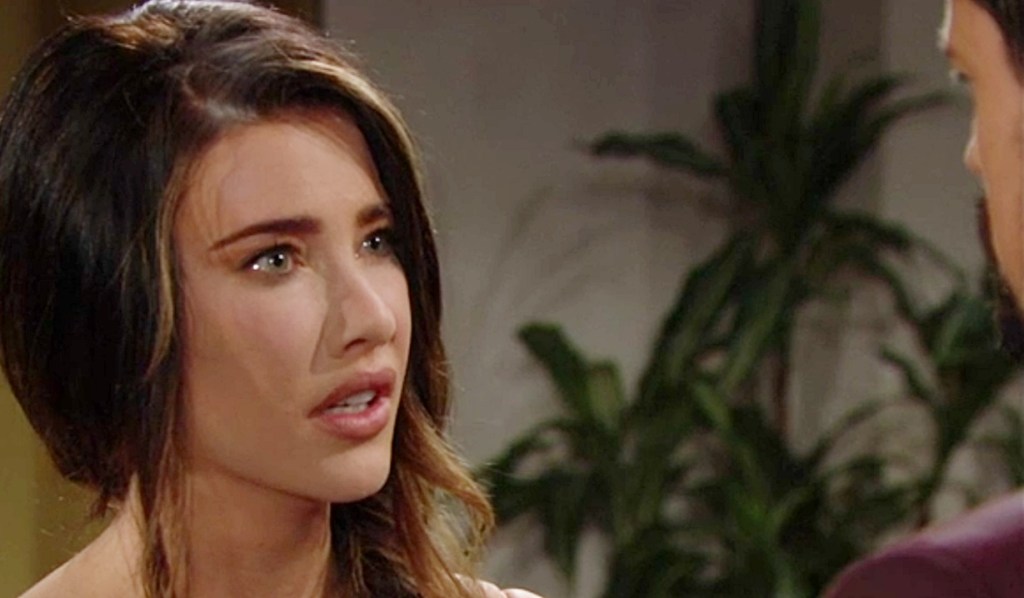 At Brooke’s, Carter sneers, “Your Katie?” Does Bill think she’s a piece of property? Bill calls her his wife and Carter reminds him she’s his ex-wife. Carter plans to make Katie’s happiness a priority. Katie listens from the top of the stairs as Carter goes over Bill asking to reconcile with Katie right after striking out with Brooke. “You had your chance with Katie and you threw it away for her sister. She deserves a man who can commit to her and only her.” Bill smirks, “And that man is you?” Carter volleys, “It’s none of your business.” Carter goes to get the cufflinks after tossing back, “Good talk.”

In the Forrester living room, Li tells Ridge that nothing is going to stop Taylor from marrying him today.

In Douglas’ room, Thomas tries to laugh off his son’s app, but Steffy hisses that he’s not to try and blame this on his son. “This was you!” Thomas asks Douglas to please tell Steffy about his app. Steffy fumes, “Stop it,” and warns Thomas again not to take this out on Douglas, who doesn’t deserve to be punished for telling the truth. She leans down and tells Douglas he did the right thing. The boy knows he did, he just wishes his dad knew it too. Steffy takes the boy’s phone and sends him off to play with Kelly. Thomas tells Steffy he can’t believe his son got the files back; he’s a smart kid. Steffy explodes about him framing Brooke, “How could you do something like this?!?” Thomas stops her from leaving the room. This is what got their parents back together so no one should stop that from happening. “You shouldn’t do a damn thing!” Steffy’s eyes widen. 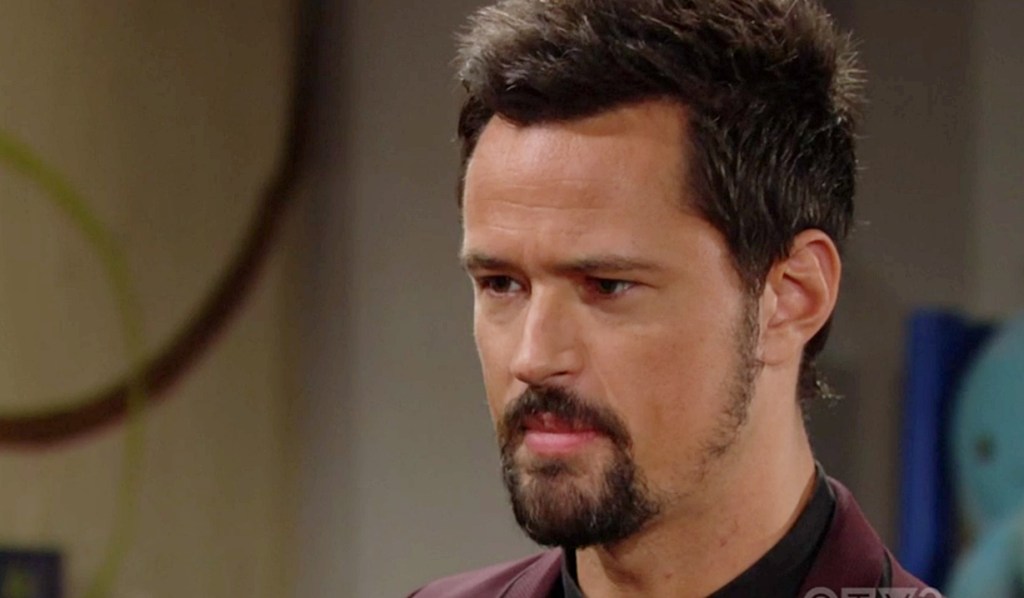 At the Forrester mansion, Carter tells Ridge he’s sorry he took so long, he had to deal with a situation at Brooke’s place. Ridge puts his cufflinks on as Eric chats with Finn and Li. They ask Ridge to take their picture, which causes him to notice Brooke’s photo on his phone.

At Brooke’s place, she paces with tears in her eyes and recalls her own wedding to Ridge. She sighs, “This will never make sense to me. Why are you giving up on us, Ridge? Why?!?”

In Douglas’ room, Steffy tells Thomas she wants their parents back together, but not like this with deception. Thomas argues it would have happened eventually any way — Brooke threatened to do it. Steffy doesn’t want their dad marrying their mom for the wrong reasons. Thomas argues that he’s not; he said he loved Taylor and wants to be with her. “It has nothing to do with anything Brooke did.” Steffy hollers, “So then tell the truth! If dad is committed to mom then he’s not going to care if he finds out that Brooke didn’t lie to him; it’s not going to make a difference.” Thomas intones, “Absolutely not.” Steffy counters, “Then I’ll tell them. Try to stop me! I dare you!” Just then, Taylor comes in and asks, “Hey! What is going on?!” What could they possibly be fighting about on her wedding day. Thomas says it’s nothing but Steffy tells her mother there’s something she should know. She tears up. “It’s about you and dad.” They’ve wanted this day for so long, but Thomas has done something that could change everything! 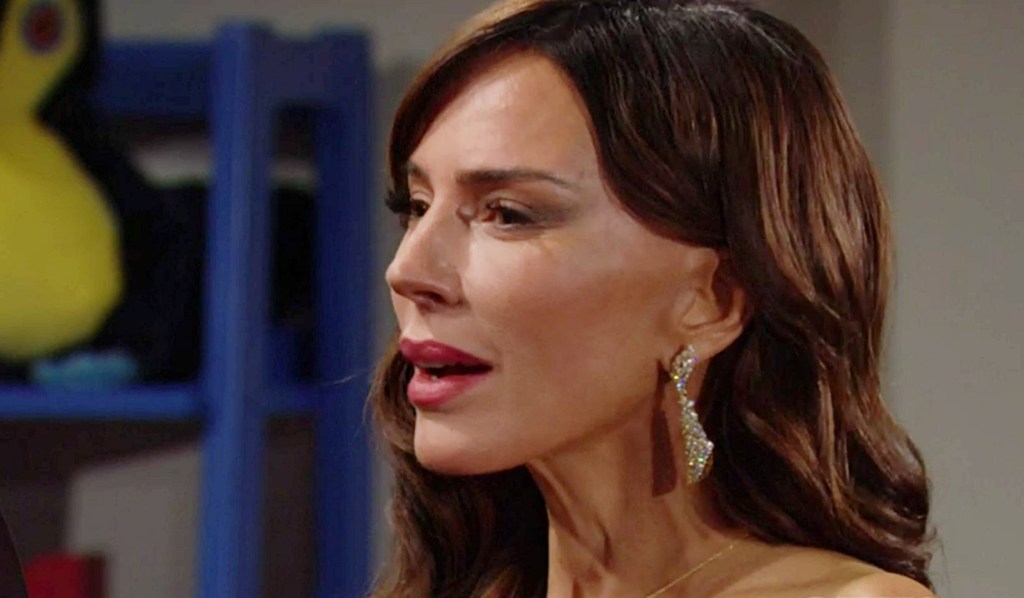 Next on The Bold and the Beautiful: Taylor walks down the aisle to wed Ridge, and the Logan sisters are surprised by a visitor.

Get a sneak peek at Stephen Logan’s visit home in the gallery below. 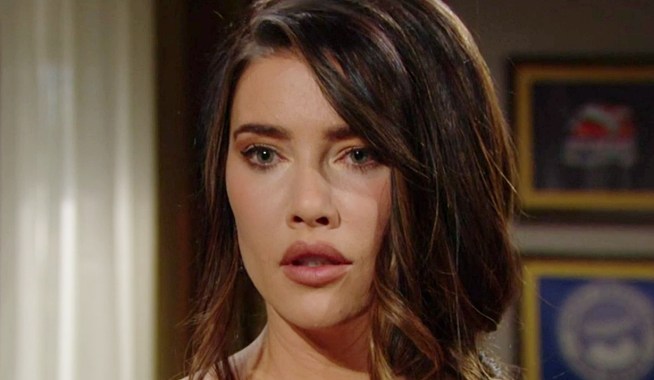 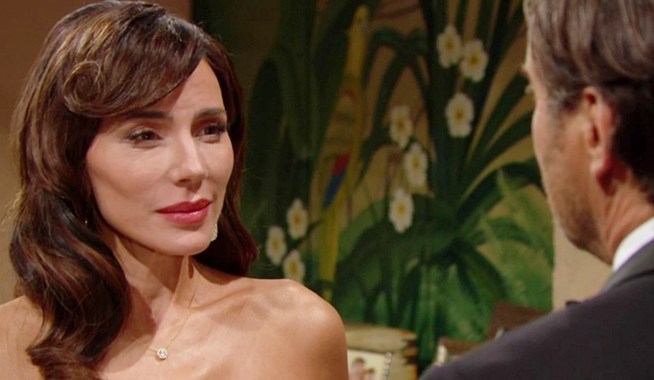