Wednesday, October 5, 2022: Today on The Bold and the Beautiful, Liam reveals concerning new information to Brooke, and Taylor pleads with Steffy to stop pushing her toward Ridge. 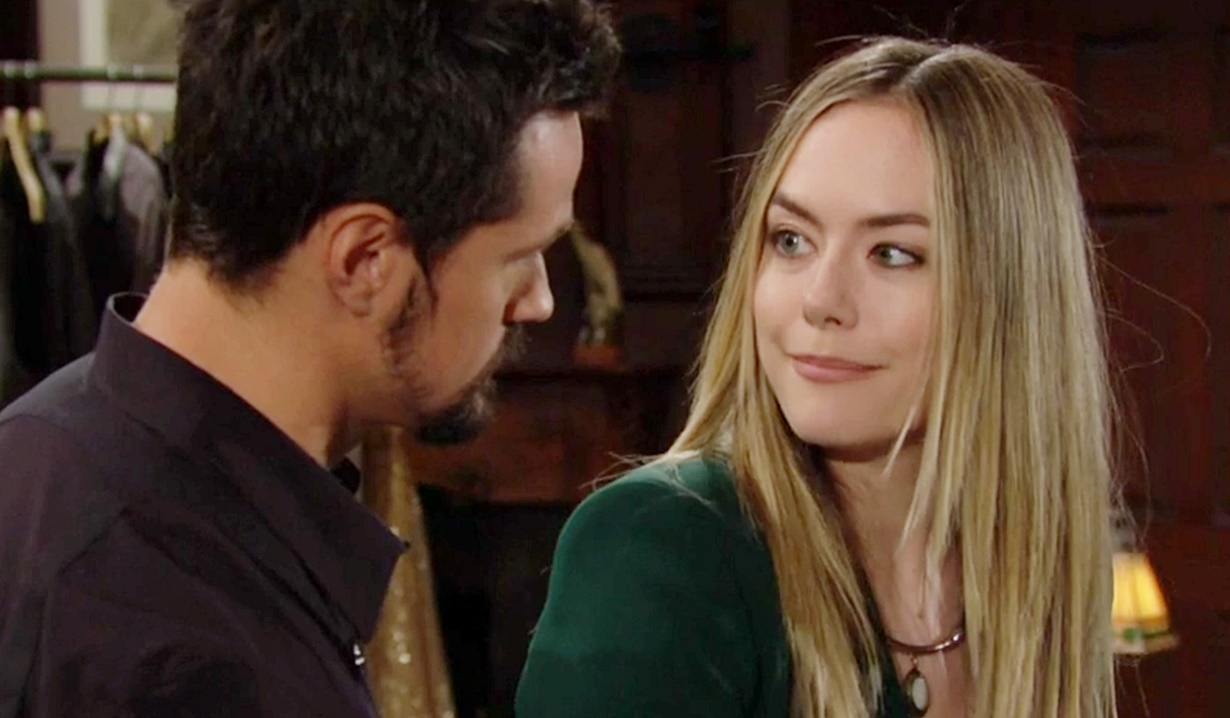 On the Forrester mansion terrace, Ridge is hit over the head with a pinecone while contemplating his destiny and thinking about Taylor and Brooke. He picks it up and smiles.

In Aspen, Taylor tells Steffy coming there was a good idea. Steffy thinks maybe they should buy Bill’s house and make it a family retreat. Taylor wants to find a new path forward and feel like herself again. Steffy replies, “As long as that path doesn’t take you away from us… and leads you right back to dad.” 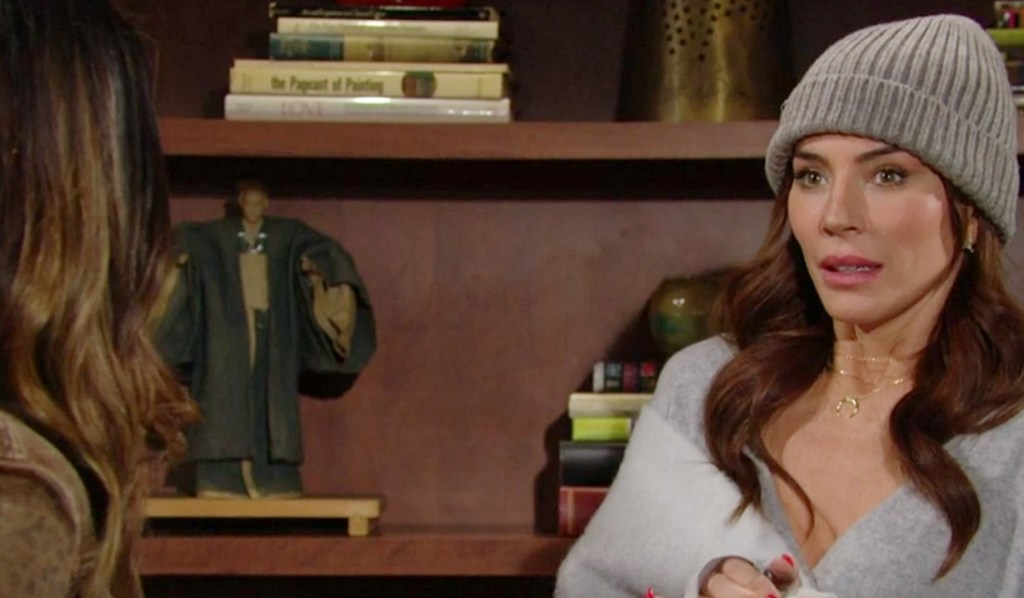 At Brooke’s place, she asks Liam, “Hope hasn’t gotten back to you yet?” He says she hasn’t. Brooke figures she’s still tied up in the meeting. Liam warns to avoid the use of the term “tied up” when it comes to Thomas. Brooke is really frustrated and hates the fact that he’s monopolizing Hope’s time. Liam complains that if she wants to see her son, she has to see him. That’s exactly how Thomas wants it.

At Forrester, Hope is sorry that Thomas had to go through the situation with CPS. The important thing is that he and Douglas are alright. She lets him know if he’d called her, she would have been there for him. He didn’t realize she had that much faith in him. They both smile. Hope wants to see Douglas later and Thomas lets her know she’s always welcome at his home. He knows she’s not entirely happy with Douglas being at the Forrester mansion. Hope admits she misses him in the cabin. She wasn’t open to this in the beginning but it’s clear Douglas is enjoying his time with Thomas. “You’re good with him. I’ve never seen Douglas as happy as he is right now.” 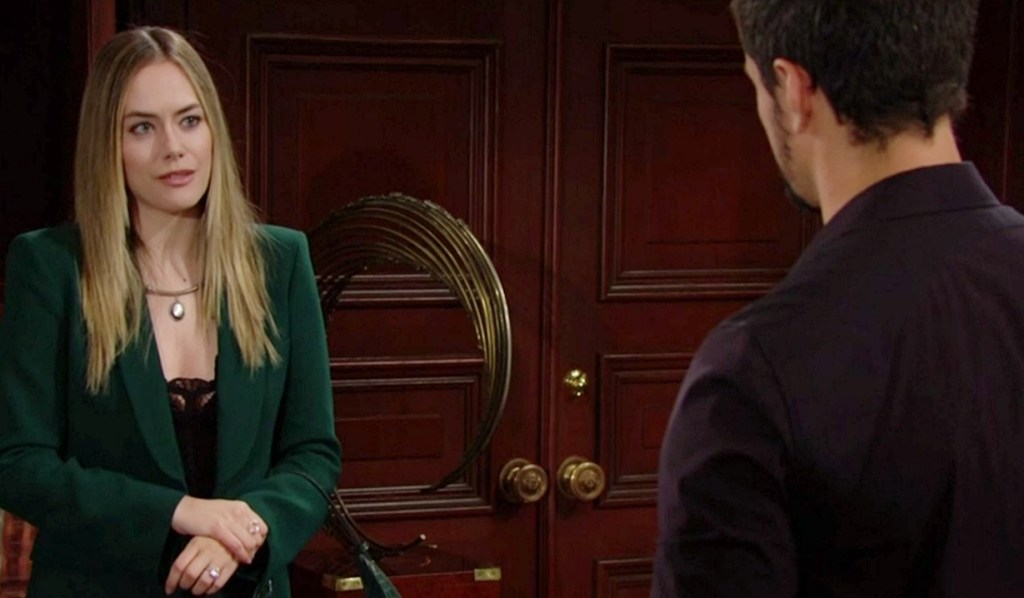 Thomas tells Hope he doesn’t want her to ever wonder if Douglas is safe with him. She doesn’t want him to be afraid to talk to her about things like CPS. They agree that they collaborate well at work and Hope points out that where Douglas is concerned, they also have a common goal. Talk turns to Hope for the Future. Hope tells Thomas their line is a success. Thomas will always give his best to her and Hope for the Future. They get to looking at sketches.

In Aspen, Taylor looks out the window and exhales. Steffy offers to call Othello and get reservations, but her mother wants to order in. She laments that she’s been acting like a teenager — coming back to LA inspired some questionable choices. Steffy disagrees and urges her not to give up on her dad. Taylor doesn’t want to stay stuck in this cycle anymore. Steffy pleads, “You have to hold on.” 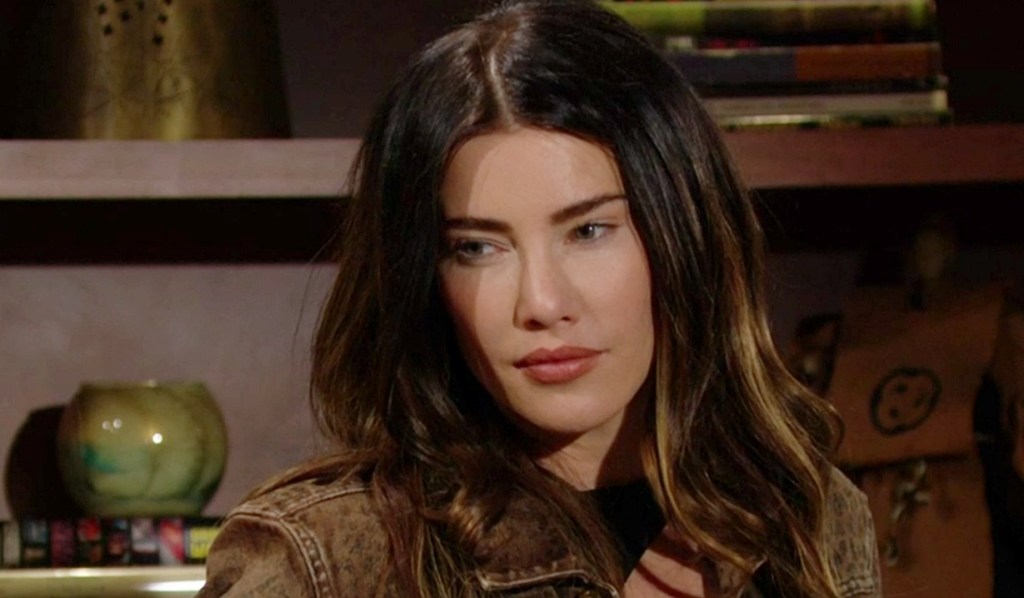 Steffy sees how much Ridge adores her mother every time he looks at her. Taylor sees it too, and that’s why she has to stay away. When she’s with him she can only think, “What if?” He’s not going to tell her that she’s his future and Brooke’s his past. Steffy insists Brooke will break his trust. Taylor needs her to just stop encouraging this thing between her and her dad. “I don’t want it like this!” It’s just going to cause a lot of heartbreak and disappointment… for all of them! 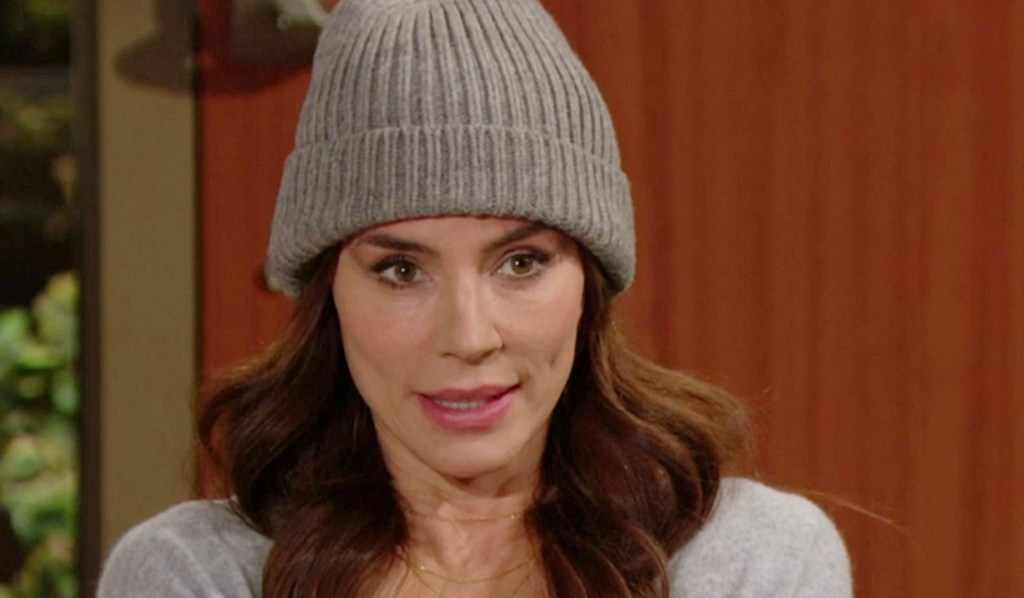 At Brooke’s place, Liam suggests she cancel her dinner plans and they’ll go marching over to Eric’s right now. Brooke laughs and says she needs her time with Ridge to reconnect. Liam hopes they have a really nice time tonight. Brooke is sure they’ll have an amazing time… just like he and Hope will. Liam replies, “If she comes home in time.” He confesses that there’s been a few nights that Hope has taken Beth to Eric’s. “She’s been spending the night there too.” Brooke is actually really worried now. Liam is grateful she has his back. Brooke tells Liam he needs to be there for her daughter. “You have a future with her, just like I do with Ridge.”

At Forrester, Hope and Thomas’ hands touch as they both reach for the pencil to add a slit to the dress in the sketch. They smile, she says, “Oops!” and decides to head out. “I’ll see you back at the house,” he says. Hope says she’s looking forward to it. 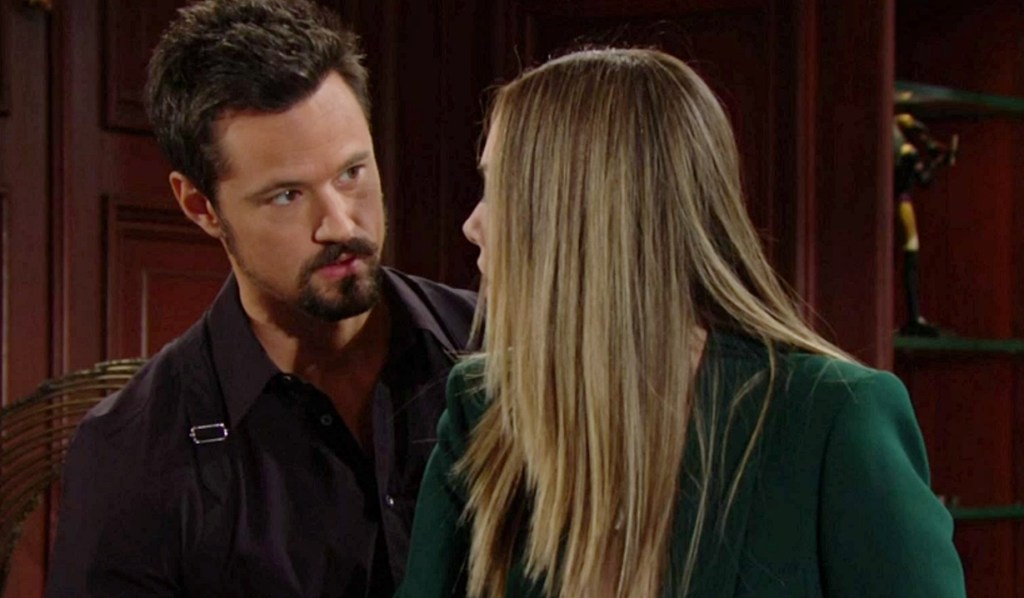 In Aspen, Steffy pleads, “Mom, dad loves you. You know that.” Taylor reminds her he’s committed to Brooke. Steffy says the marriage will implode; it always does. Taylor doesn’t want him to choose her because he gets mad at Brooke. She wants all of him or nothing, but he can’t give that to her. “I deserve so much more.” She urges her daughter to focus on her own happiness and her own life. Steffy wheedles for Taylor to give Ridge just a little more time. Taylor insists she’s not doing it anymore. She reminds her daughter how this works — he shows up and says he wants to be with her, but he eventually goes back to Brooke. “I can’t do this anymore, Steffy, I’m done.” She has to give the love and support to herself that she’s been giving away. “It’s breaking me.” Steffy understands and says she’s sorry. They embrace.

At Forrester, Thomas takes a call from Steffy, who tells him their mom is having a really hard time — she’s questioning everything. She asks what’s going on with their dad and Thomas is puzzled she hasn’t heard from him. Steffy texted him before they landed but assumed he was in a meeting. Thomas relays that the last he saw him they were talking about Brooke but he’s no longer in the building.

At home, Brooke leaves Ridge a voicemail asking him to let her know what time he’ll be home so she can order the car. “I can’t wait to see you.” She hears a car outside and turns toward the door.

In Aspen, Taylor stands beside a creek and flashes to being with Ridge in Monte Carlo. She shakes her head and walks when suddenly Ridge calls out to her and appears. Taylor gives him a weary, knowing look and doesn’t smile. 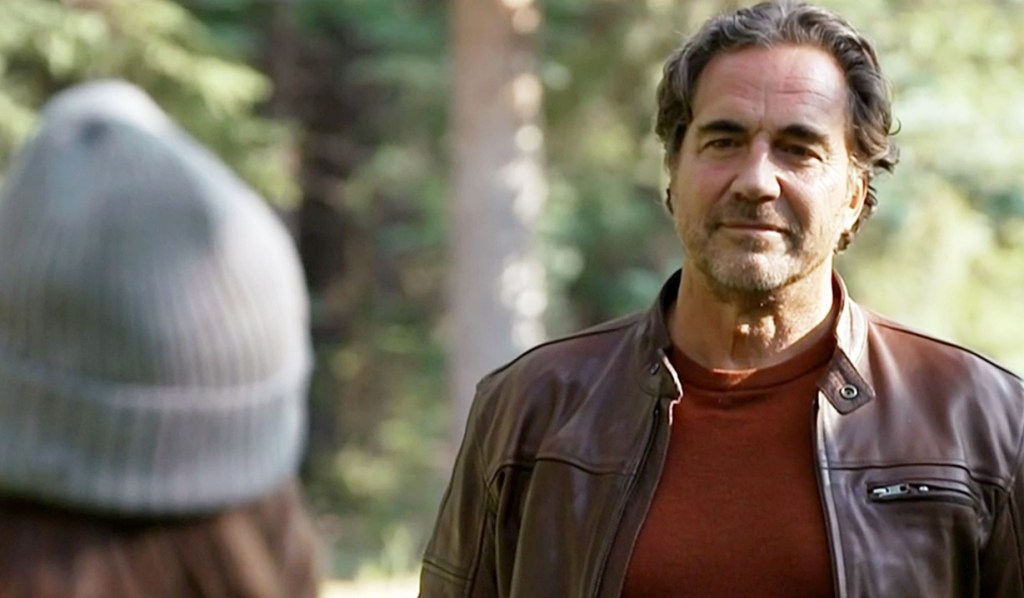 Next on The Bold and the Beautiful: an emotional Ridge pleads with Taylor to hear him out, and a surprise visit from Bill provides Brooke with the information she needs. 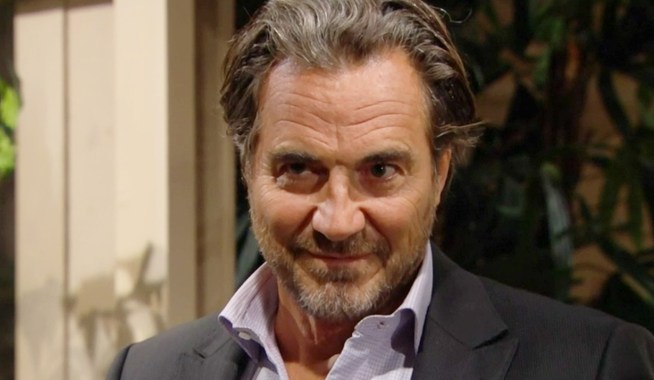 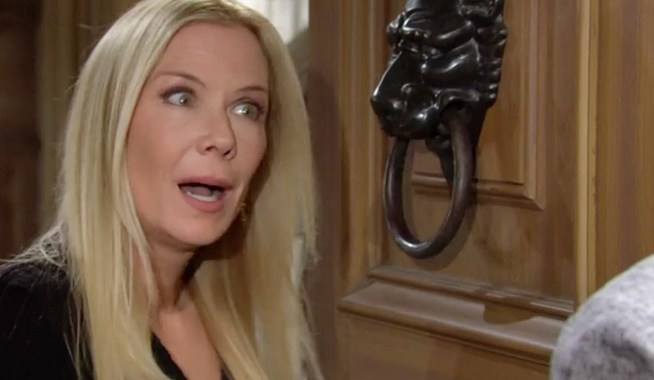