Wednesday, September 14, 2022: Today on The Bold and the Beautiful, Steffy puts the hard sell on her father, Hope shares her suspicions with Liam, and Thomas encourages his mom. 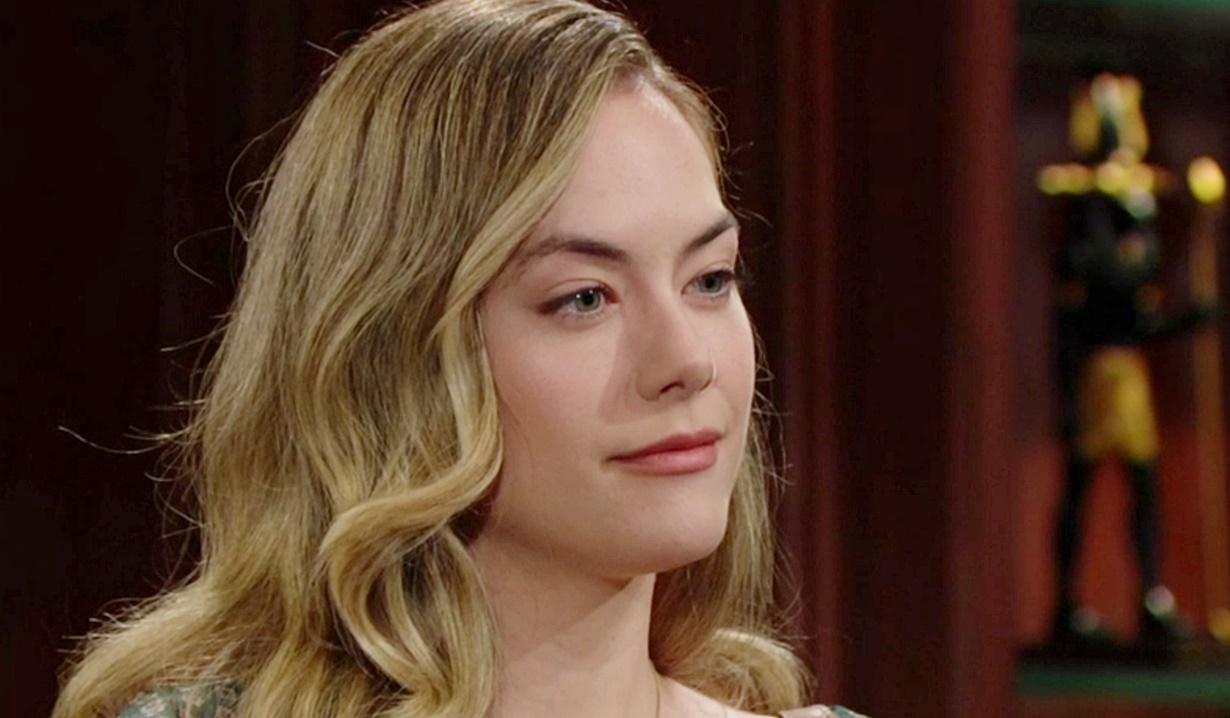 At Forrester Creations, Steffy goes on about her father’s love for her mother. She learned that in a moment the person you love can be taken away and can’t understand why Ridge wastes his time on someone who constantly hurts him. “Have the life you deserve, dad. Have it with mom.” Ridge feels she’s being a good daughter and trying to protect him and her mother. Steffy insists he needs to move out of Brooke’s, maybe into Eric’s, and do whatever it takes to have a future with Taylor. 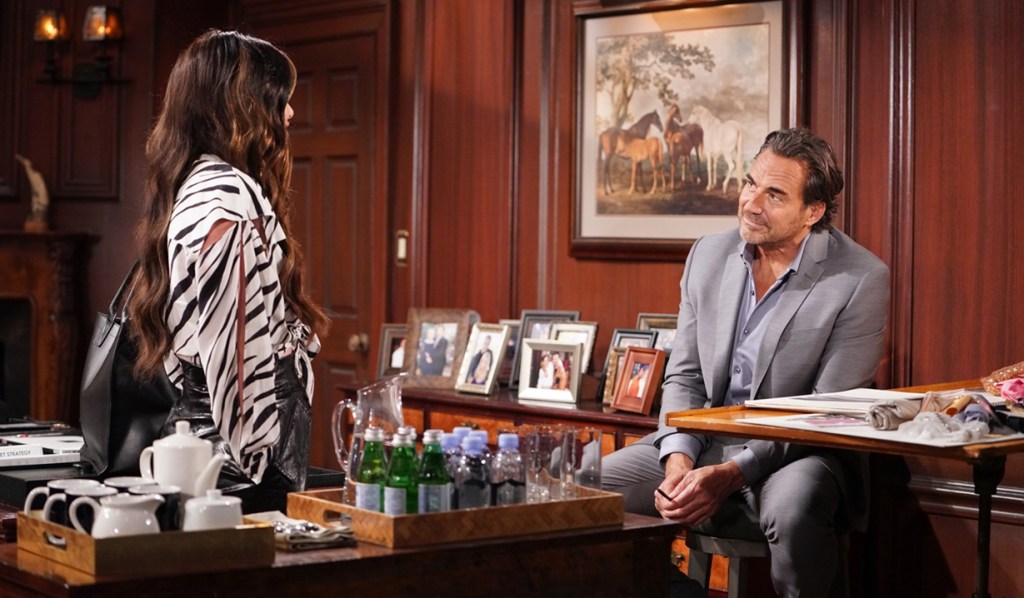 Thomas surprises Taylor with a shake at the cliff house, where she’s working from home. She asks how it’s going over at Eric’s with Douglas. Thomas enthuses that it’s been great. He feels lucky that Hope has allowed them to have this time together. Taylor reminds her son it’s not Hope’s place to allow it. Thomas insists they’re in a good place and will work it out.

In the cabin, Liam and Hope kiss and express their love. Talk turns to how quiet it is without Douglas there. Liam thinks it’s time they bring him home.

Hope tells Liam she was just discussing the same thing with her mother. Liam notes that he and Brooke agree about the matter. Hope will tell him the same thing she told Brooke; she wants Douglas home but doesn’t want to start a custody battle. Liam advises that she can’t let her fear of pushing Thomas prevent Douglas from being where he lives — with them! Hope has seen firsthand how happy Douglas is at Eric’s with his father. Liam hates when it gets to this point, and he hears himself saying these things but he’s worried Thomas is getting in her head again. 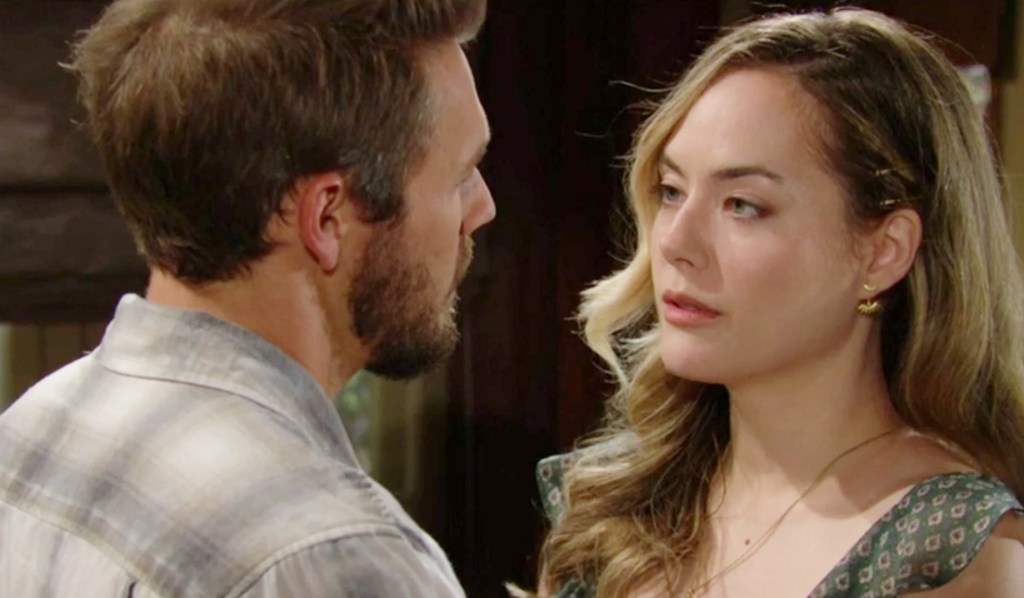 Hope doesn’t want them to forget that Douglas is the one who asked to spend more time with Thomas. Liam isn’t convinced that Thomas’ questionable behavior is in the past. When he left him, it was with the same sinking feeling he used to have. He’s taking advantage of her generosity by literally never bringing Douglas home, which makes it so she has to visit him at the Forrester mansion, where he is never invited. It’s classic Thomas manipulation. Hope just wants to keep the peace right now, but she feels they should be concerned about her mother. She really does think Taylor and Steffy are trying to break up her marriage. Liam knows Brooke feels the same way. He wonders if Hope thinks they’re getting anywhere. Hope points out Taylor kissed him in Monaco and now there’s all these Forrester get-togethers. She reports that Taylor took every opportunity to cozy up to him when she was there. “She was practically in his lap.” She didn’t fan the flames by saying anything to her mother, but it has to stop. She announces she’s going to have a friendly chat with Steffy and walks out.

At the cliff house, Thomas starts in on Taylor about how she should be with Ridge. Steffy is on the money about them belonging together. Taylor says, “Too bad he’s married to Brooke.” She didn’t come back to LA to steal Brooke’s husband. Thomas knows she’s not that kind of person — Brooke is. She has done it and would do it again. Taylor reminds Thomas his father has a say in all of this. Thomas knows they love each other and he feels they belong together. “So get together. Do it.” Thomas concedes that he and Steffy don’t need to have their parents back together but Taylor and Ridge are happy and loving together. The relationship with Brooke isn’t healthy for him. He comes to life around Taylor and it’s the same for her too. Taylor thinks he’s right. Thomas predicts they’ll end up back together. Taylor hugs him. 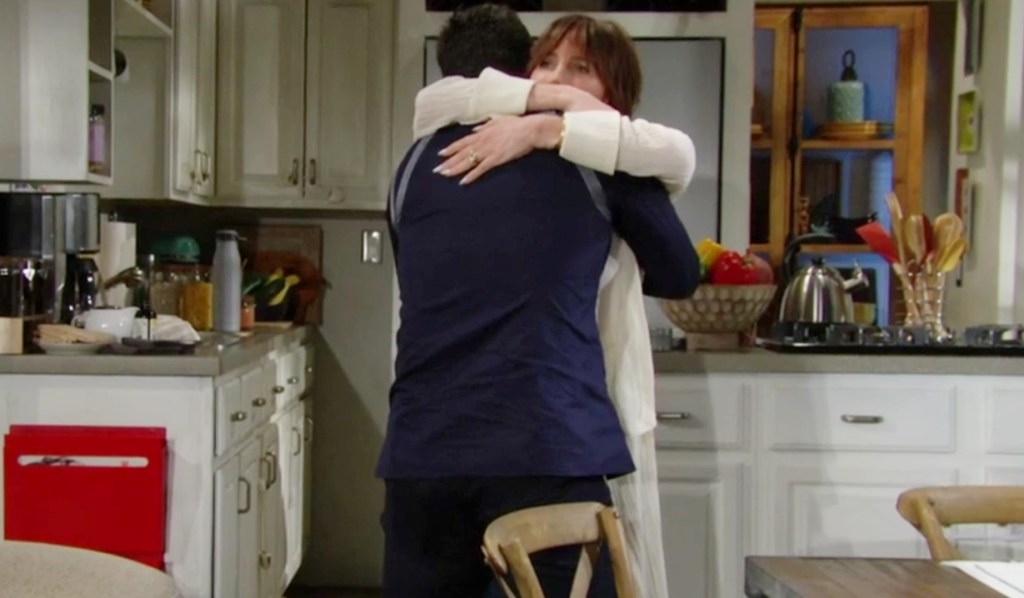 More: Real Housewives drama as one is dubbed ‘evil’

At Forrester, Ridge knows Steffy wants him together with her mom and the family back together. Steffy recaps that he can be with Brooke, who’s careless with his heart, or with Taylor who would never cheat on him. “If you don’t love her, say it, and I’ll stop trying.” Ridge blurts, “Of course I love her! I’ll always love her!” Steffy looks vindicated and loves hearing him say that. “Claim the life you’ve always wanted,” she implores. Steffy reminds him he’s not getting any younger and Taylor can give him stability and peace. She urges him to leave the office and go tell her mom he loves her. “Go back to mom.” 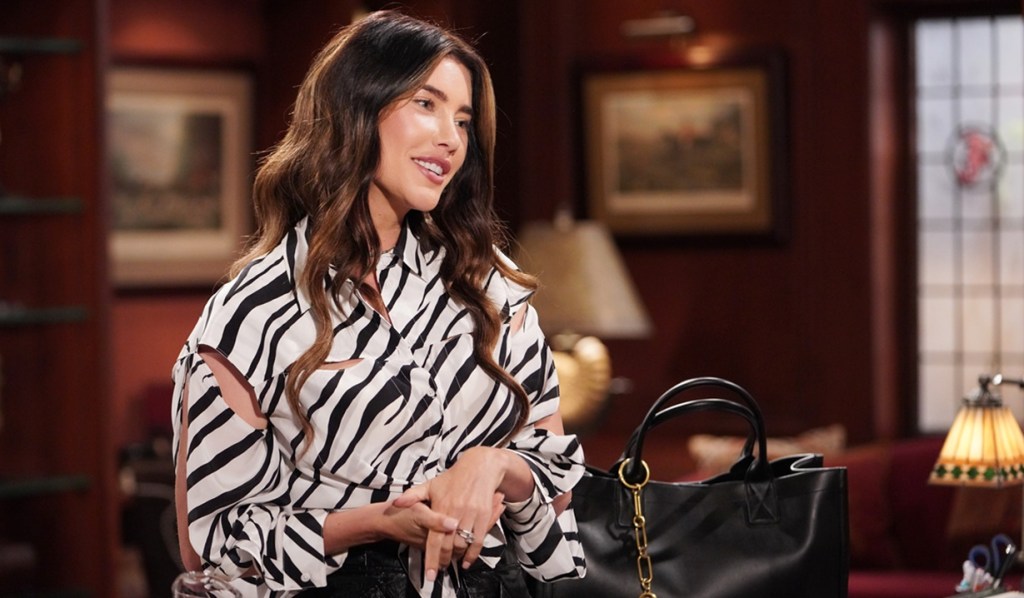 Steffy is working in the office alone when Thomas comes in. They compare notes on their conversations with Taylor and Ridge and hope they’ll take their advice — it could be magical. Steffy’s telling Thomas their father needs to move on from the disloyal Brooke when Hope walks in and slams the door. She says that’s enough bashing of her mother for one day. “You have a lot of nerve judging my mom.” Steffy’s allowed to have an opinion on her father’s marriage. Hope points out Ridge loves her mom and no amount of her putting her down or trying to pit the Logans against the Forresters is going to change that. “For the record, I am no longer going to sit idly by and allow you and Taylor to undermine my mother’s marriage.” Thomas raises his brows and looks at Steffy for her reaction. 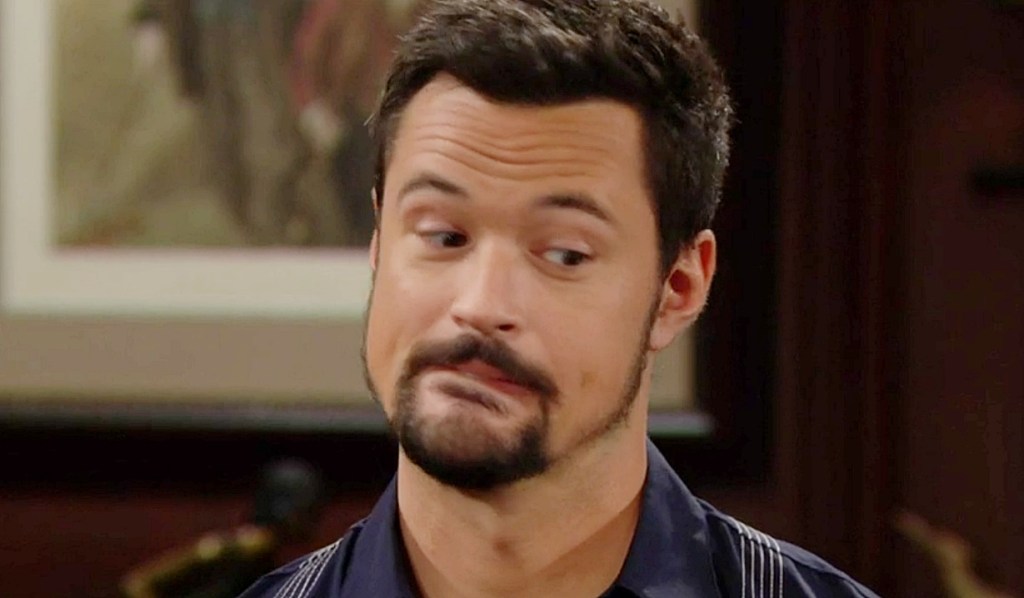 Ridge arrives at the cliff house. He tells Steffy just gave him an earful and Taylor laughs that Thomas just did the same. She asks why he came. He just wanted to check on her. They muse that the kids want them together so bad — they kiss in Monaco raised their hopes. Taylor ruminates that they were just caught up in the moment, but Ridge interrupts to say it was more than that. He feels their kids are smart. Taylor nods. “They know how much I love you.” Ridge replies, “I love you too, Doc.” She has him say it again and tells him it feels really good to hear him say it. She wonders if he came to tell her he’s ready to start a future with her. 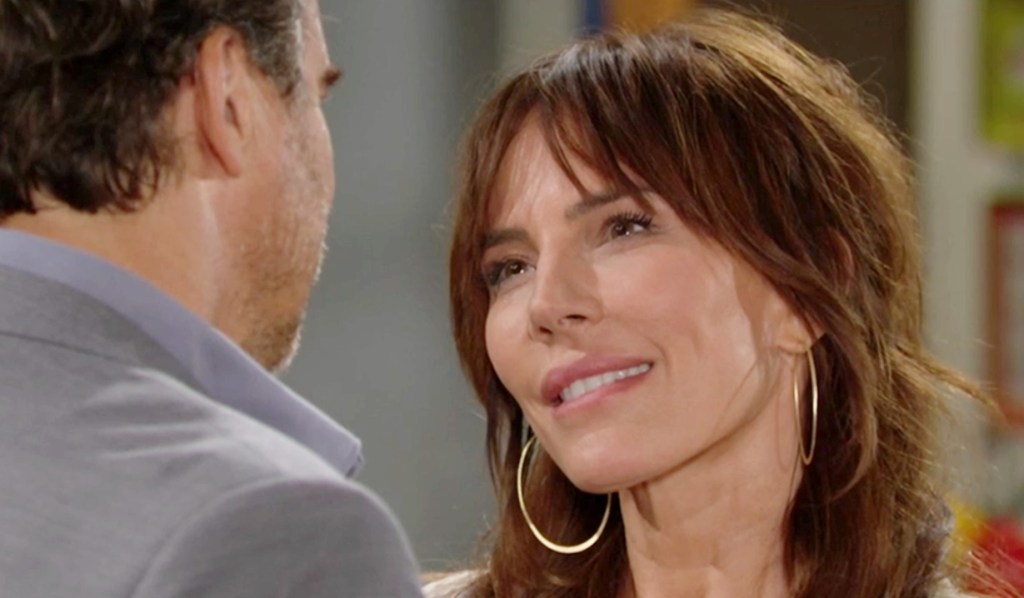 Next on The Bold and the Beautiful: Steffy and Hope battle over Taylor, Brooke, and Douglas, and Bill and Brooke discuss Katie and reminisce about their past.

Updated! Look over Hope and Steffy’s rivalry over the years in the photo gallery below 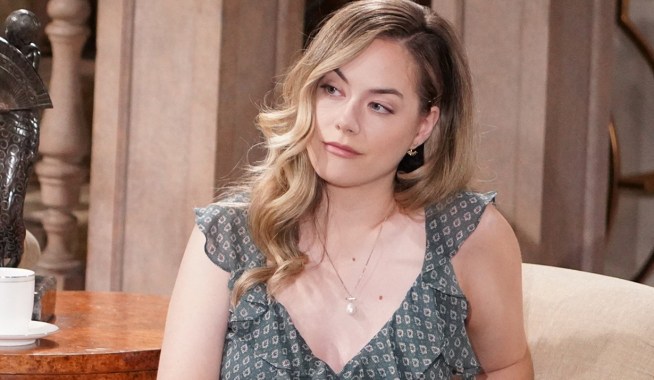 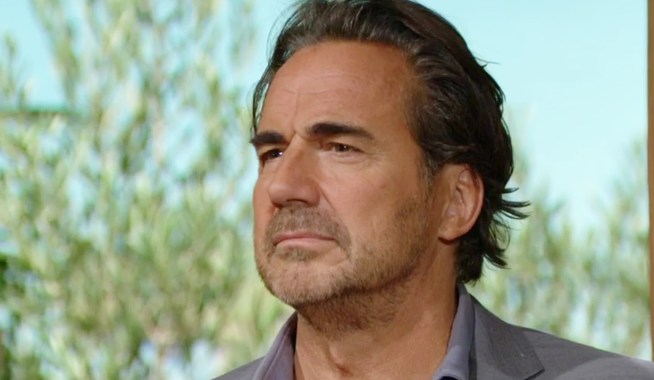