As Taylor Gets Bad News About Steffy, Bill Discovers Li Is Alive!

Thursday, July 21, 2022: Today on The Bold and the Beautiful, Bill gets a shock, Finn gets answers he probably didn't want, and Taylor finds out where Steffy really is. 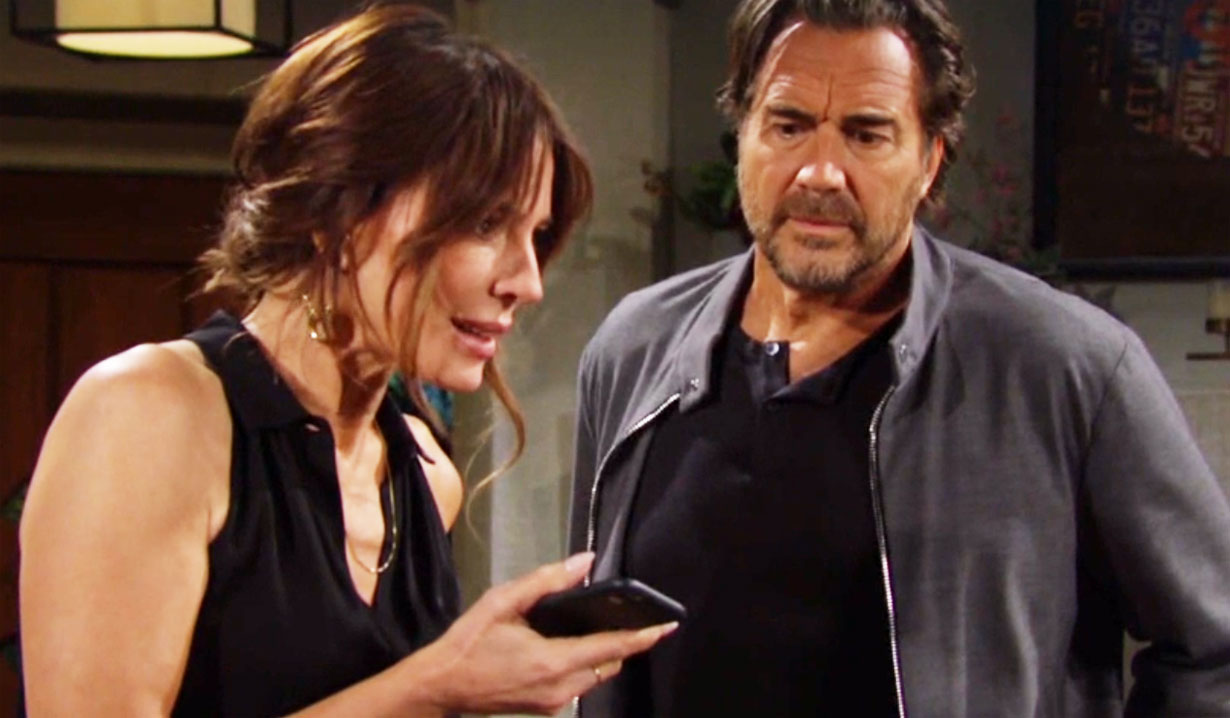 “You lied.” With those words, today’s Bold & Beautiful picks up where yesterday’s left off, with Finn demanding answers about Li. “My mother wouldn’t just save my life and hand me over to you,” he tells Sheila. “So you tell me… what did you do to her?” Sheila basically says, “Settle in, son, ’cause we’re gonna do some recapping.” She explains that after escaping prison, she wanted to find out where Li had buried him. 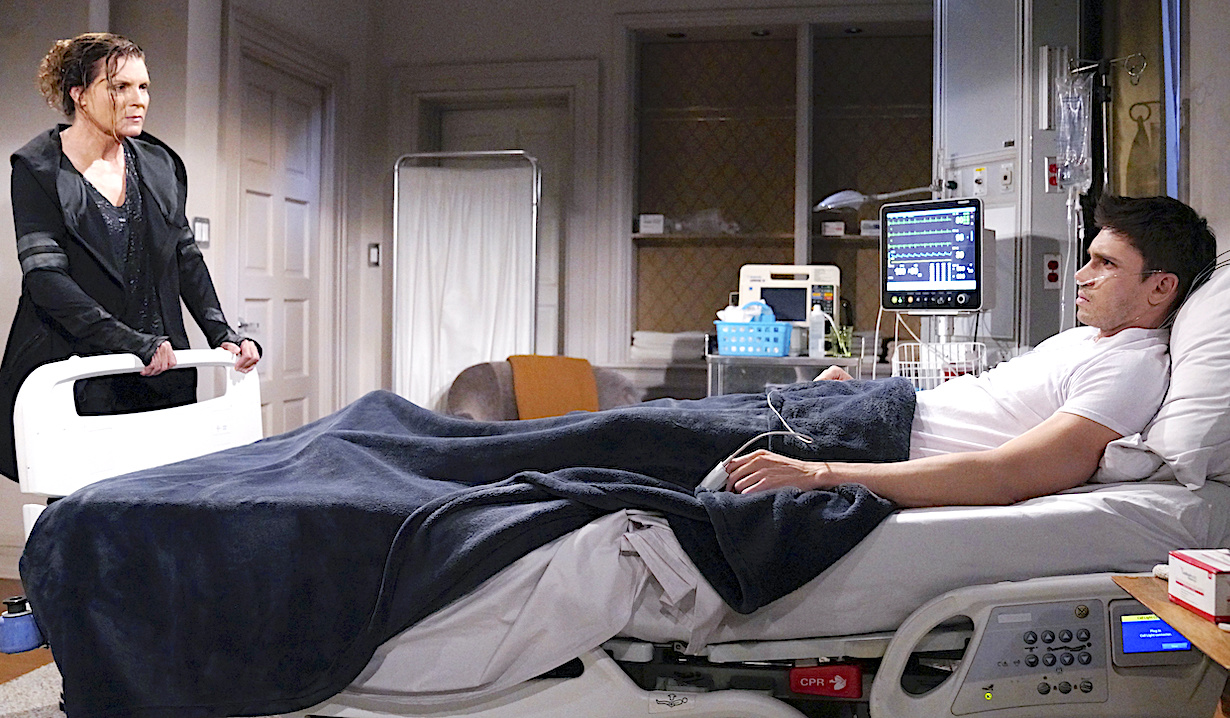 Upon tracking down Li, Sheila continues, she found “not a grave, not an urn, but you… my beautiful son, alive!” That’s all well and good, but Finn says it doesn’t explain where his mother is now. Continuing to stall, Sheila says Finn needs to understand the pain she was in. “Because you shot me,” says Finn, raising the bar in the “who suffered more” game. With their still being 20 minutes left in the episode, Sheila backtracks in her recapping, explaining that while behind bars, she was haunted by the fact that she’d never be able to put flowers on his grave. So she had to escape and make Li tell her where he was buried.

More: How much more can Finn take?

“Make her?” asks Finn, having picked up on the wording. Sheila says Li was acting cagey, as if something was off. “She was probably scared to death, seeing you, knowing you escaped,” points out Finn. We flashback to the Li/Sheila showdown (meaning we get to see that awesome scene in which Sheila tossed Li aside like a ragdoll again) and Sheila finding Finn, alive.

“It was probably the most profound, moving moment in my life,” Sheila says of the realization she didn’t kill her son. Like the constantly running advertisements for shingles, Finn doesn’t care. He just wants to know what happened next. Again, he notices Sheila speaking in the past tense about his mom. “Why was?” he asks. Finally, Sheila admits that Li lied to her. “She betrayed me! I trusted her. Why would she do that? Why does this happen to me? Is there no one that I can rely on? Why? Why does everyone make me do things that I regret?” she asks. 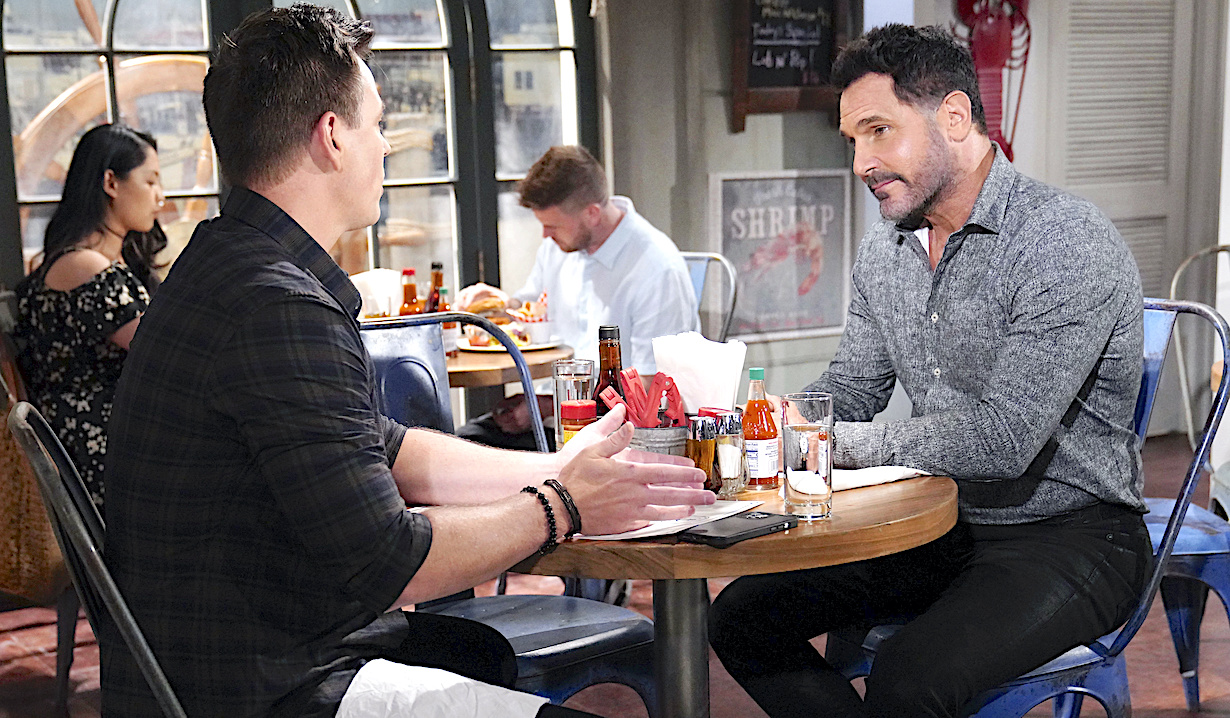 Bill meets Wyatt on a new set… er, at a restaurant we’ve not been too before. “You said it was your new favorite seafood restaurant, so I am fishing to see if it’s true,” Bill quips. They talk about plans for the weekend, with Wyatt pointing out his dad’s had an awful lot of free time lately. “What’s going on with you and Katie?” he asks. Bill says he’s given her the space she needs and trying not to focus on how little progress he’s made with her.

Their conversation soon turns to Finn’s death and Steffy leaving town to cope with her loss. Wyatt is shocked, having never heard his dad speak with such compassion. “It’s a side-effect of being a father,” Bill declares. “This is what you three boys have done to me!” He admits that his sons have helped him grow and recognize what’s important in life. He wishes he’d been there to protect Steffy and Finn from Sheila. After dinner, Bill picks up the tab. “I wasn’t able to do anything for you guys when you were growing up, so it makes me feel good to do it now,” he admits. Sensing his dad’s melancholy, Wyatt offers to stick around, but Bill says he needs to get home. But as Wyatt walks away, it’s clear that Bill is a bit sad. 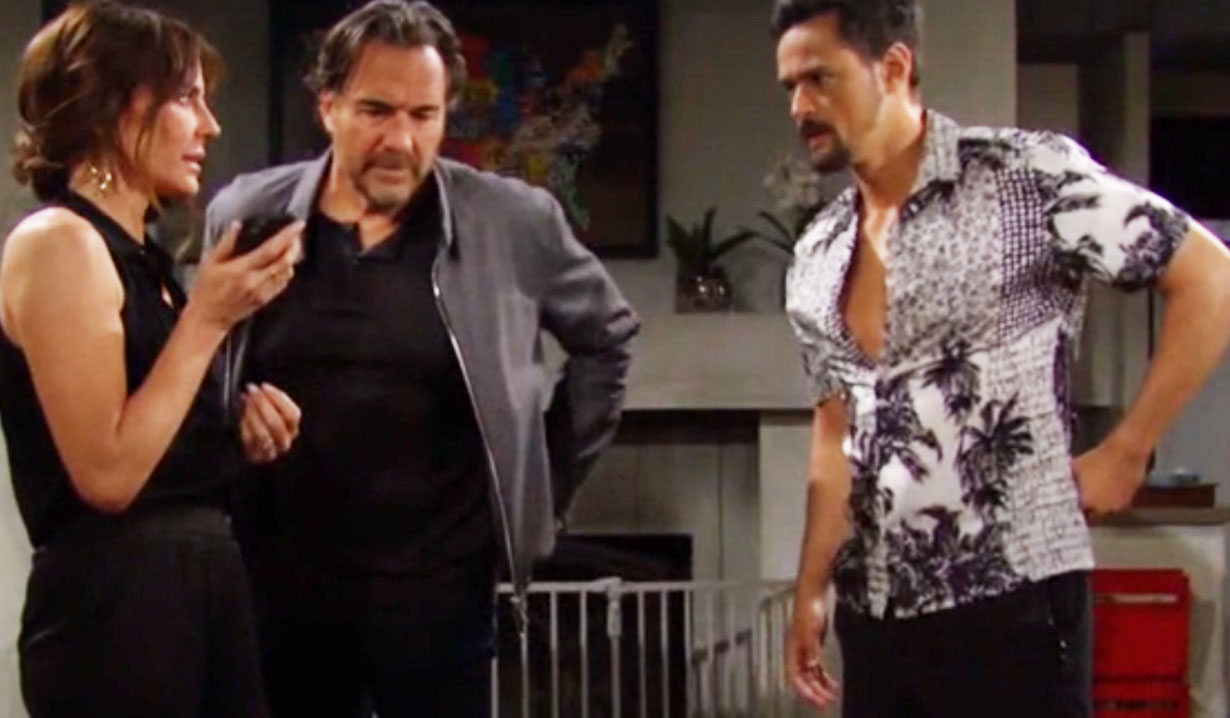 Taylor calls Steffy, asking her to return the call as soon as possible. When Thomas enters from having been surfing, he admits he couldn’t get his mind off Steffy, who hasn’t returned anyone’s calls. Ridge enters to say that he, too, has been unable to get through to her. Ridge catches them up on the fact that Mike Guthrie was involved with Sheila’s escape. Ridge insists that Mike knows where Sheila is.

Taylor receives a call from a doctor in Monaco… and it reveals exactly why Steffy hasn’t called. “She is struggling quite a bit,” the doctor tells Taylor as Ridge and Thomas listen in on the phone. So much so that she has checked into a facility — which is described as being more like a resort — with the kids and the nanny. “I know you are worried. Rest assured, she will get through this,” says the doctor. “She’s receiving excellent care.”

As Ridge says that this, like so much else, is Sheila’s fault, the she-devil is finally getting to the end of her story. Sheila tells Finn that Li “lost control of the car. I don’t know what happened, it just exploded. I saw it go into the water. I saw her sinking.”

Stunned, Finn demands answers. “Answer me… is my mother dead?” 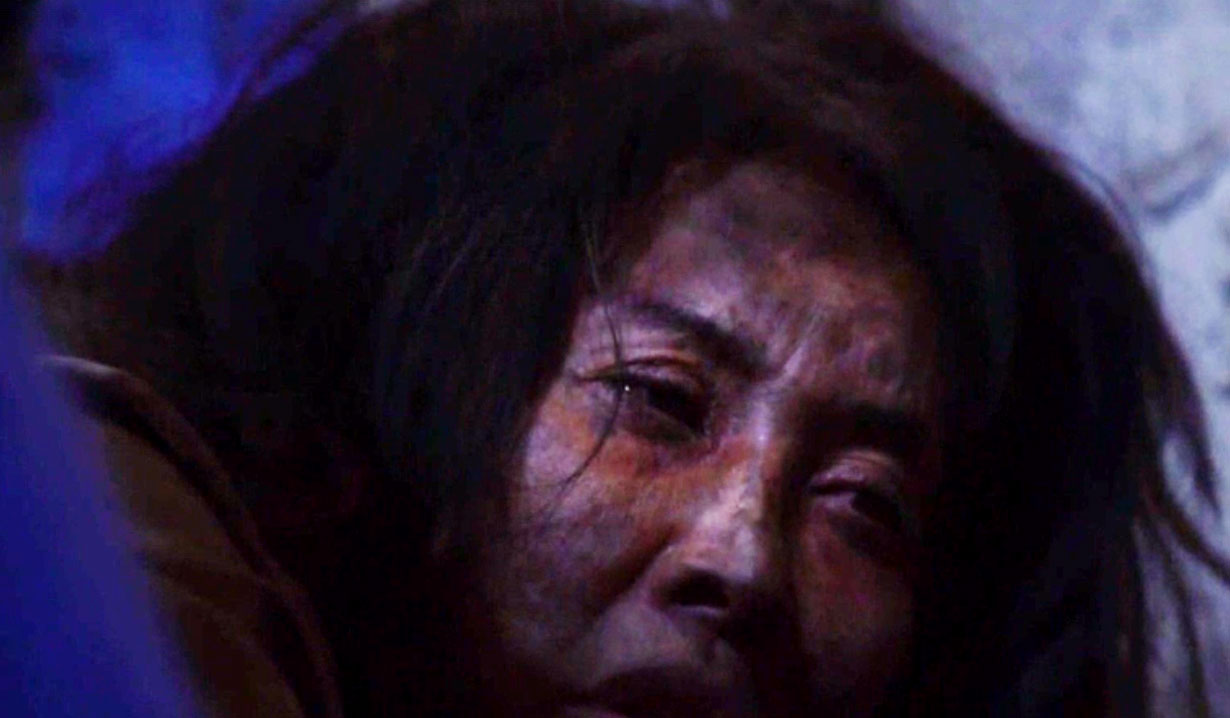 More: Why we suspected Li was alive

And just as Sheila tells him it’s true, Bill, walking down an alley, hears a noise and we see that the person making it is… Li!

Next on The Bold and the Beautiful: Ridge and Taylor realize that Steffy might not be doing as well as she claims, and Finn… let’s just say he has a big reaction to Sheila’s latest bombshell! 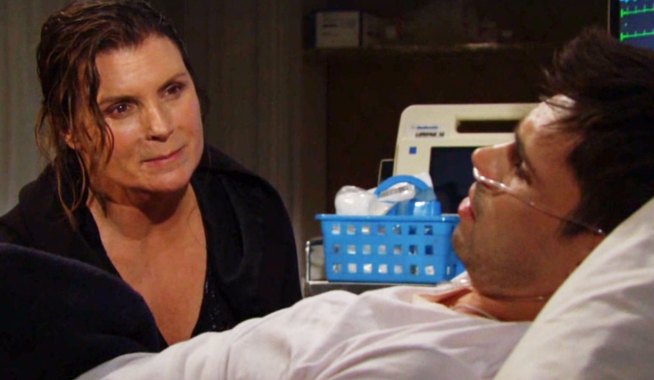 As Ridge Tries Shouting a Confession Out of Mike, Finn Demands Answers From Sheila 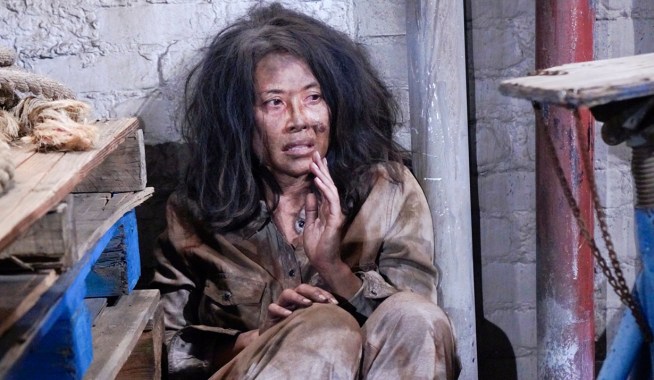