Monday, June 20, 2022: Today on The Bold and the Beautiful, Ridge delivers scary news to Hope and Liam, Quinn appeals to Eric to fight for their marriage, and Finn speaks. 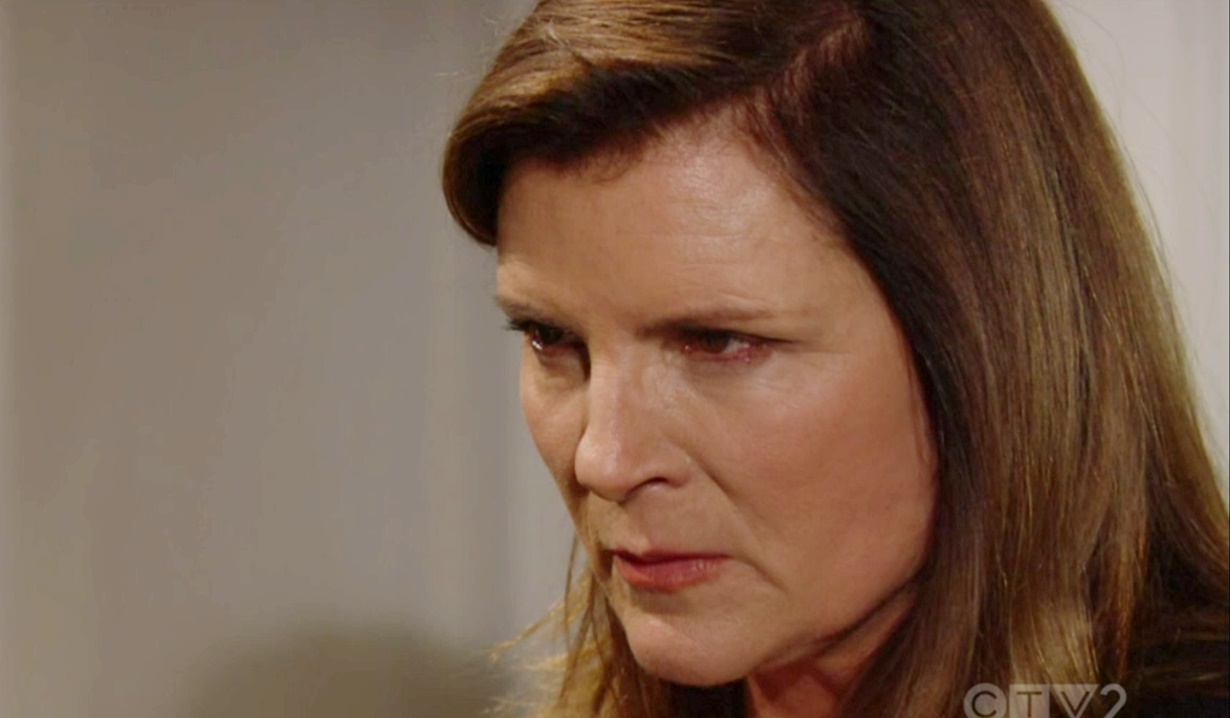 At Li’s place, Finn views her and Sheila through blurry eyes and hears Li tearfully saying they’re there — both of his mothers. Finn struggles to say something. Li asks, “What is it?” Finally, he asks for Steffy, but then falls into unconsciousness again. Sheila marvels that he asked for his wife — against all odds he’s going to make it! “I didn’t kill my son! I’m going to have another opportunity to be a mother to him,” she exclaims with tears in her eyes. Li hides her look of disgust as she checks on Finn. 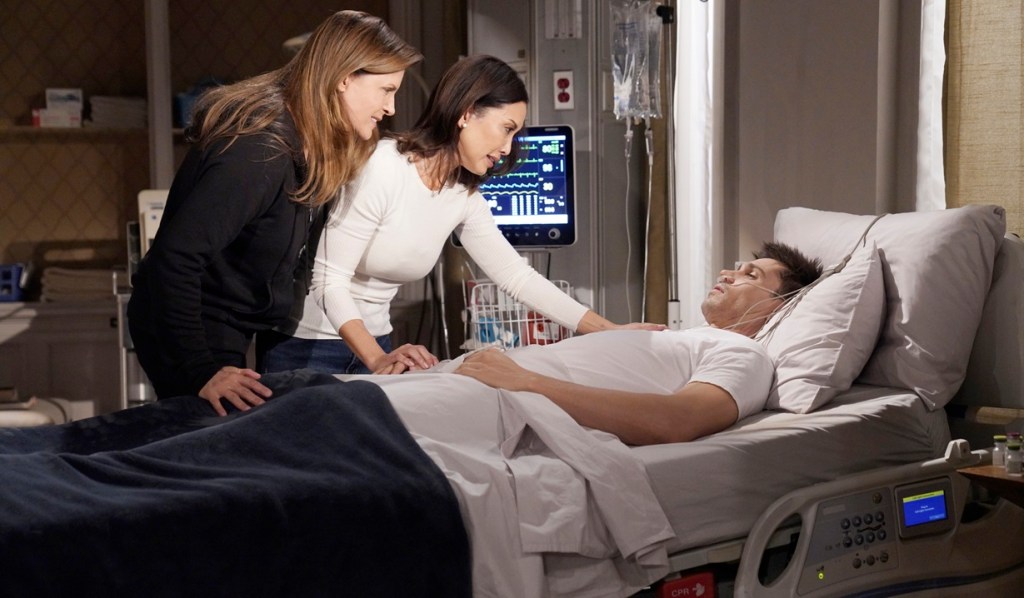 At the cabin, Hope has told Liam about Donna and Eric and wails that she hates knowing what she knows now. She recaps that she believes wedding vows should be respected, but things haven’t been the same since Quinn and Carter had their affair. Hope ruminates about the way Donna and Eric were talking about each other. Liam asks Hope what she wants to do. 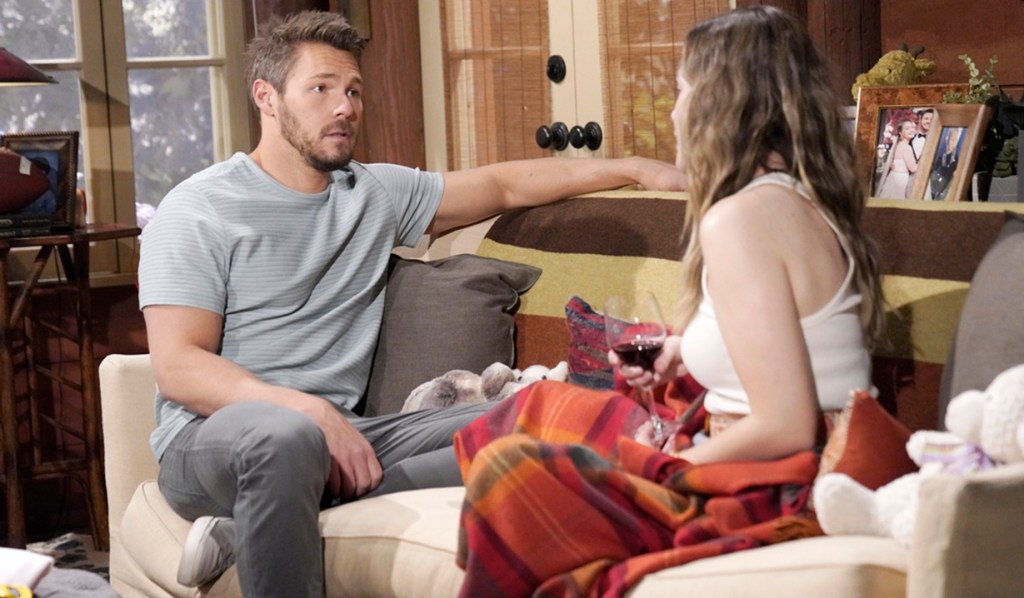 Ridge arrives at the cabin with something Liam and Hope need to know. “Sheila’s escaped.” Liam seeks reassurance that Sheila doesn’t know where Steffy and the children are. Hope mentions Li, and Liam urges Ridge to try reaching her again. 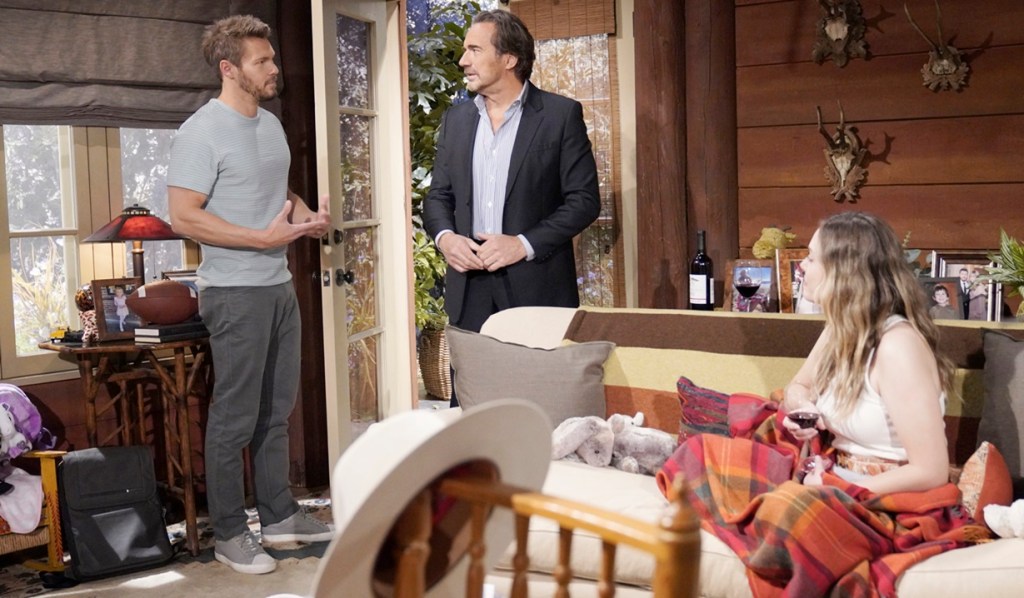 At Li’s place, her phone rings and they see that it’s Ridge. Li convinces Sheila to let her answer so he doesn’t get suspicious. Sheila insists she put it on speaker. Li answers and assures him she got his message that Sheila has escaped. She says she hasn’t seen or heard from her, but will contact him if that changes. Ridge warns that Sheila’s dangerous. Li thanks him and disconnects. Sheila beams that Li must now believe how much she loves their son. Li wonders how anyone could not love Finn. Sheila will be forever grateful to her for bringing their son back. “I know that we can nurse him back to health. We can love him back to what he was before this horrible thing happened.” Sheila recaps that it was risky for her to come there, but she had to know what Li had done with her son and say her final goodbye. But she found out he’s alive and now the burden she was living with has been lifted. Li declares that she needs to get medicine for Finn. “I have to leave.” Sheila’s expression changes. 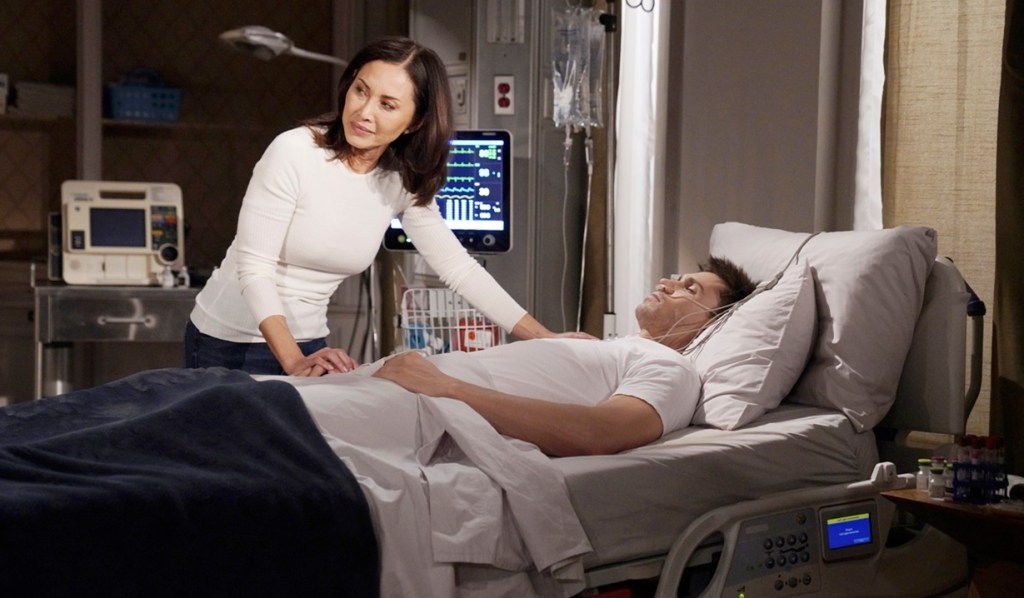 In his living room, Eric recalls Hope urging him to follow his heart and to tell the truth.

In the Forrester office, Quinn asks Carter to give her the ring back. “Don’t give it to Paris! Don’t do something you’re going to regret.” Carter tells his ex-lover if he goes to Paris with this, he’ll be able to move on. Quinn wants him to be truly happy. He says she makes him truly happy, but he can’t have her. Quinn protests that he doesn’t love Paris the way a man should when he’s planning to spend the rest of his life with someone. Carter blurts, “The way I love you?” He will always love her.

Alone in the office at Forrester, Carter looks at the ring sitting on the desk, as Quinn’s warnings about doing something he’ll regret ring in his ears. Paris comes in and he asks her to shut the door. She asks if everything is alright. He says, “No, but it can be.” Paris looks at him questioningly. Carter declares that he doesn’t want to wait. “I don’t want to put our future on hold any longer.” Paris asks, “Our future?” Carter insists all they have to do is reach out and take it. He was deluding himself before and not seeing things as they really are. Paris asks if he’s sure this is what he wants. He’s sure this is what he needs.

At the Forrester mansion, Eric, swilling a martini, is surprised to see Quinn home so soon. He asks if she’s alright. Quinn admits she’s worried about Carter, but then apologizes for bringing it up. In fact, she doesn’t want to talk at all. Quinn wants to find their way back to the way they were when he hung the portrait over the fireplace. “I miss you. I miss us,” Quinn exclaims. Eric knows. Quinn thinks they have a marriage worth fighting for and wants to know that he feels the same way. Eric looks uncomfortable as she reaches out and places her hand on his knee. 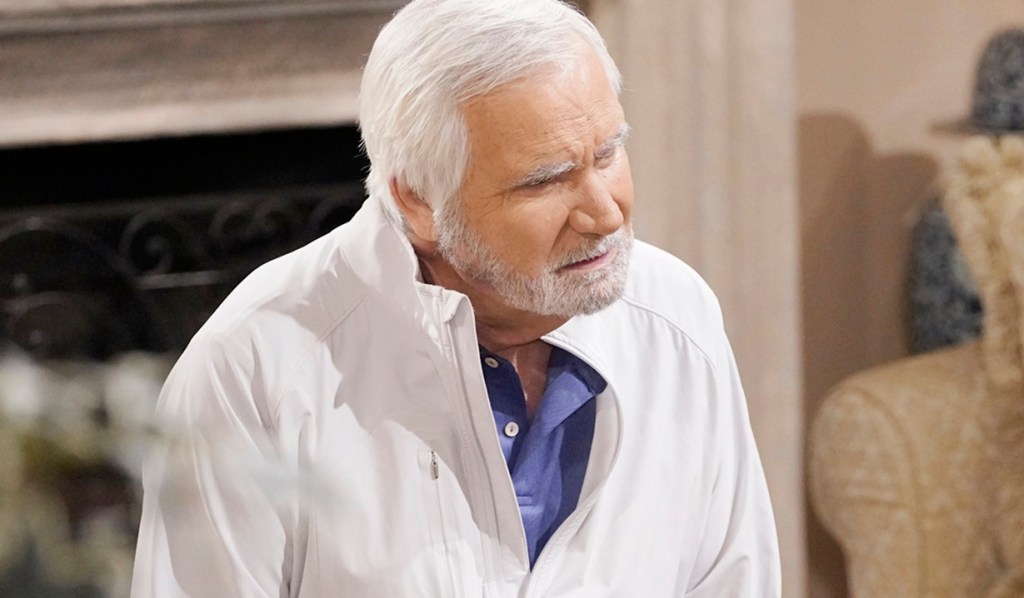 At Forrester, Carter wants to build something wonderful with Paris and adds, “Something that starts with this.” He shows her the ring in his hand. Paris gawps, “You want to marry me?” Carter implores, “Say yes. Say you’ll be my wife.”

In the Forrester living room, Quinn tells Eric she knows their marriage has changed and that she’s to blame for that. She just wants him to believe in their future as she does.

At the cabin, Liam, Hope and Ridge hope Baker and the police will find and apprehend Sheila before she can wreak anymore havoc.

At Li’s place, Sheila muses, “You think you’re going to just walk out that door?” Li replies, “Yes. And you’re going to let me because you know what’s going to happen if you don’t. Finn will die.” Li won’t allow that to happen. Sheila decides she’ll go, but Li argues she doesn’t have access to the hospital pharmacy and there are cops looking for her everywhere. She needs to get his medication or all of his progress will be undone. Sheila is torn, so Li presses her, “Let me go. Our son’s life depends on it.” Sheila relents. “Alright. You go get Finn’s medication. I’m trusting you.” Li grabs her coat and purse and leaves the room, pausing to take a breath outside the door. She pulls out her phone and dials the number for an emergency. She’s attempting to explain how urgent her call is when Sheila appears. Time slows down as a terrified Li gapes at the furious Sheila, who knocks the phone away and glares at her with a downright murderous look.

Next on The Bold and the Beautiful: Paris responds to Carter’s proposal, Li makes a run for her life with Sheila in hot pursuit.

First look! See ‘Steffy’ and ‘Finn’ back together in the photo gallery below.

<p>Tanner Novlan (Finn) and Jacqueline MacInnes Wood (Steffy) were all smiles when they reunited in Monte Carlo and took part in an autograph signing together ahead of a very special celebration. All of this just weeks after <a href="https://soaps.sheknows.com/the-bold-and-the-beautiful/news/633841/bold-beautiful-tanner-novlan-baby-son-birth-jones-douglas/" target="_blank">Novlan became a father for the second time</a> and Wood brought her third baby boy into the world.</p>

<p>Here’s another shot of the twosome happily dedicating photos to <em>Bold & Beautiful</em> fans in Monte Carlo. We love their 8″ x 10″ glossies!</p>

<p>Jacqueline MacInnes Wood was looking playful — not to mention glowing — at the event in Monte Carlo, which took place just <em>one</em> <em>month</em> after she <a href="https://soaps.sheknows.com/the-bold-and-the-beautiful/news/630080/bold-beautiful-jacqueline-macinnes-wood-birth-son-brando-pregnancy-timeline-photos/" target="_blank">gave birth to her third son, Brando.</a></p>

<p>We’d like to know how Krista Allen and Thorsten Kaye are explaining some of the wacky behavior their characters Taylor and Ridge display on <em>Bold & Beautiful</em>! We have to wonder if this session yielded more questions than answers!</p>

<p>“Tridge” fans will delight in seeing their faves together in Monte Carlo. The pair made a good-looking couple as they posed for photos at the 35th anniversary celebration.</p>

<p>Novlan and Wood made a dazzling twosome at the soiree after traveling to Monte Carlo to represent the show and reunite officially for the first time after his ‘Finn’ character was seemingly killed on the soap, leaving Steffy grieving her husband.</p> 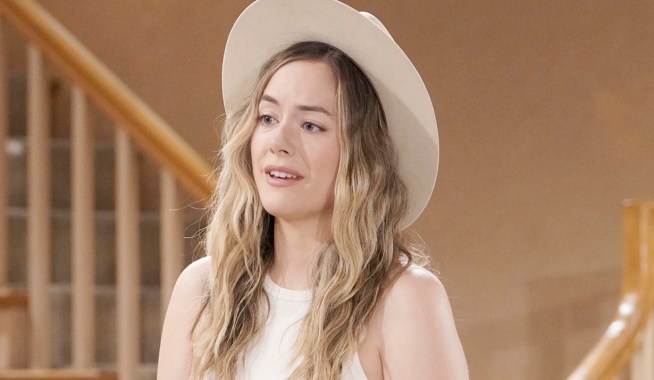 After a Vicious Fight, Sheila Pursues Li to Her Fiery Death — and Paris Accepts Carter’s Proposal 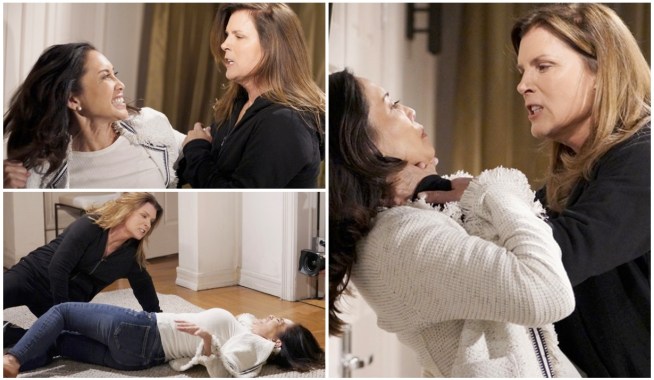