Friday, June 3, 2022: Today on The Bold and the Beautiful, Donna takes Eric on a trip down memory lane, Quinn makes her position known to Carter, and Ridge asks Brooke to leave. 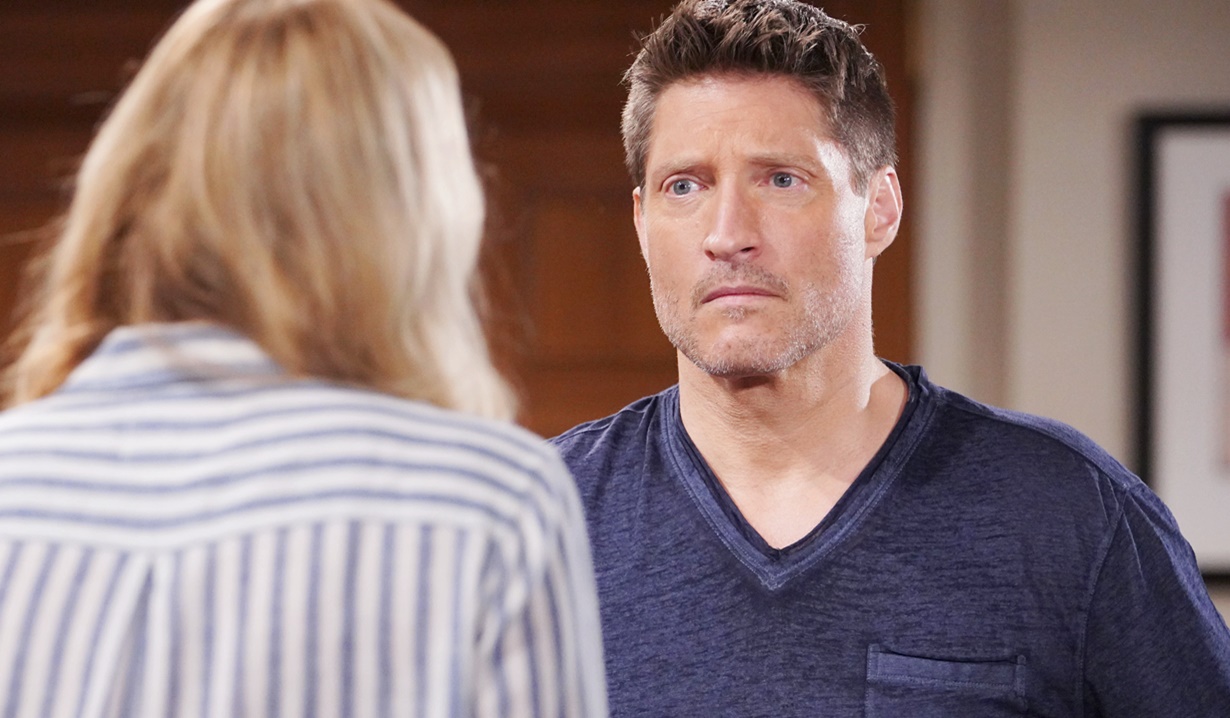 In the Forrester living room, Taylor tells Brooke it’s not too much to ask for her and Ridge to spend some time alone after Steffy went away. Brooke wonders why she didn’t just go with her, and questions why she came there with food. “Is there something behind this?” When Brooke prompts Ridge to weigh in, Taylor complains about her putting him in the middle. Brooke doesn’t see why Taylor needs to be there because of Steffy leaving, it’s not like she can’t video call her. She reminds her rival that Ridge should be living with her and that they exchanged vows.

More: Another Sheila in the making?!

Taylor scoffs that she remembers Ridge’s commitment to Brooke — she doesn’t have to keep reminding her. Ridge interjects that he moved over there to figure things out and didn’t ask anyone to wait for him to make a choice. He recaps what happened to Steffy and Finn that turned their lives upside-down and tells Brooke that he and Taylor, as parents, need to spend some time together. “I’ll see you at the office.” Brooke nods knowingly and tersely says, “Good night, my lovely husband,” as she walks out the door. 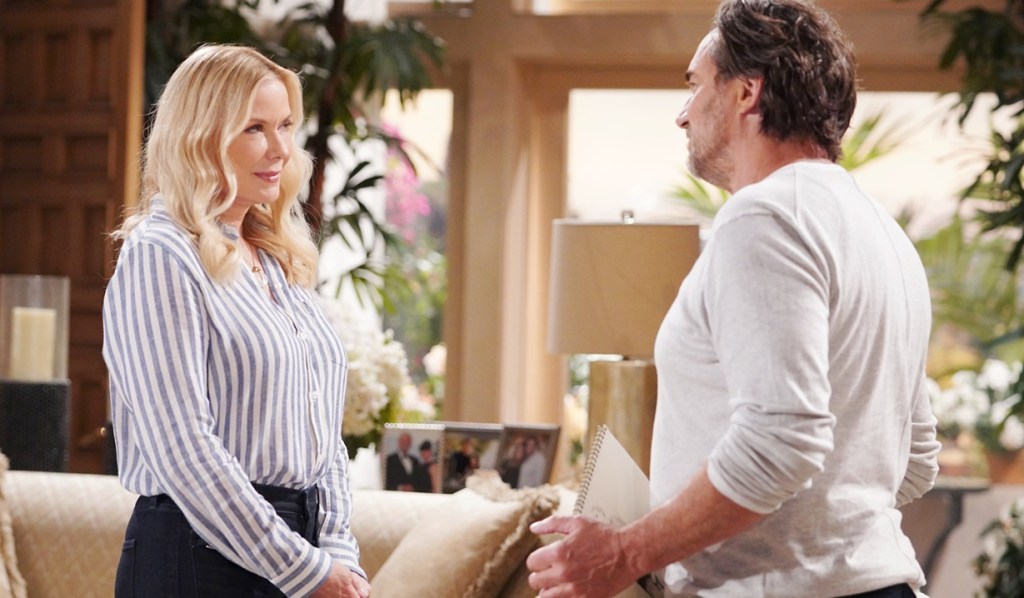 In Forrester Creations’ office, Carter tells Quinn he can’t stop thinking about her and dreaming about her. He realizes her loyalty is to her husband, but to stand there and not hold her in his arms is so damn hard. “To not want that connection and that passion back…” Carter knows he must sound like a crazy man, but Quinn protests, “You’re just telling me how you feel.” He feels stuck. She’s sorry. He’s not. To have what he had with her… he never felt more alive in his life. Quinn knows this had been really hard for him and she hates that, but her commitment is to Eric. “It has to be.” Carter knows, but he’ll always have these feelings for her and it’s driving him more and more crazy every day.

At the health club, Donna tiptoes up behind Eric and puts her hands over his eyes. “Guess who?!” Eric needs a hint, so she opens her coat and reveals her lavender lingerie. She senses he’s off and asks what’s going on. 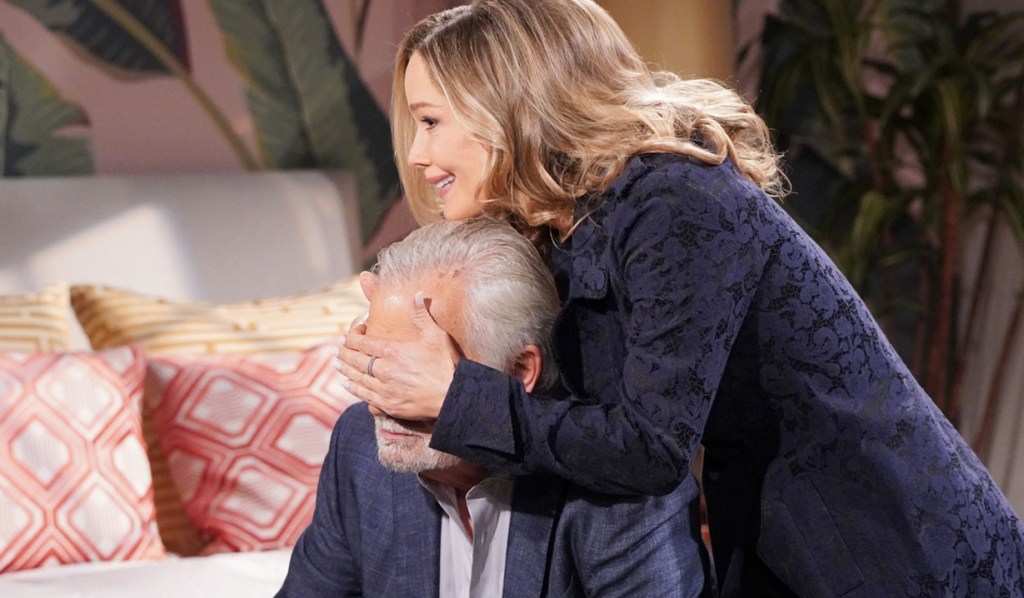 At Forrester, Quinn recaps that Eric is loyal so she must treat him the same way. “Think of Eric.” Carter is thinking of Eric, that’s why he’s not holding her now and never letting go. Quinn reminds him things got out of control before. “I cannot betray Eric again. I cannot do that to a man I trust with my whole heart!”

At the health club, Eric tells Donna he has a lot on his mind, but she’s good at making him feel better. They kiss. He sighs, “Oh Donna…” She asks what it is. Eric loves being there with her but he can’t help thinking… Donna cuts him off. “Thinking is so over-rated.” She claims medical experts agree and gets him laughing. Donna tells Eric he’ll always be the great love of her life. She loves getting even a sliver of his time, but she can’t help but wonder if they could have more.

At Forrester Creations, Carter recalls the emotions they shared in his loft. Quinn laments that it would be so easy to get swept up in all that again, but she can’t. “I can’t be with you, Carter.” 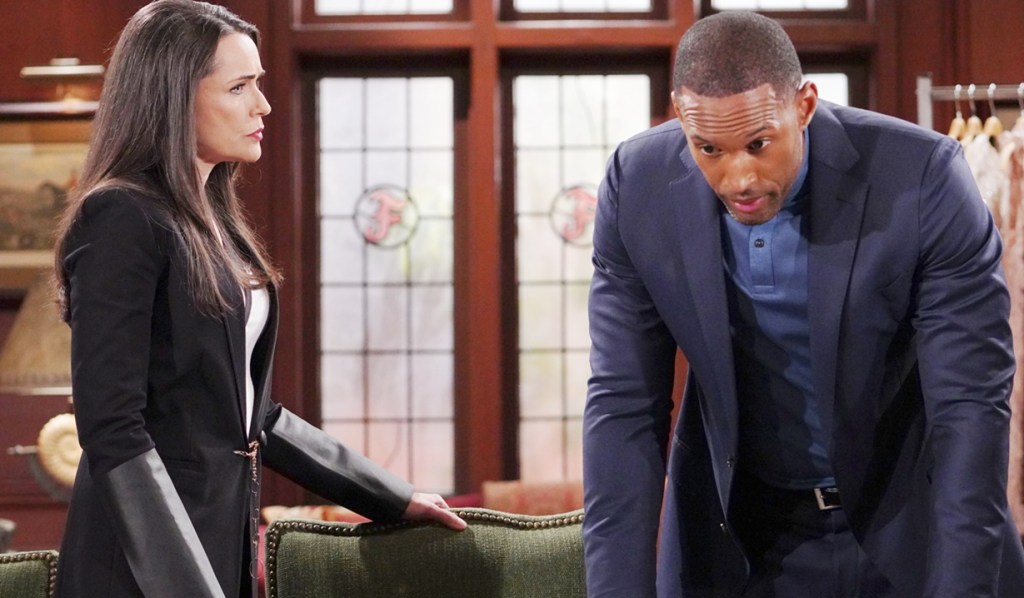 At home, Brooke looks at a framed photo of Ridge. Deacon walks in; he was down at the cabin. He guesses things didn’t go well. Brooke was hoping to spend some time with Ridge but… Taylor happened. She was there when she arrived… and she was there when she left. Deacon, fuming at Ridge’s denseness, rants that if she was his wife, he’d want to be with her every single moment. “I’d want you by my side.” 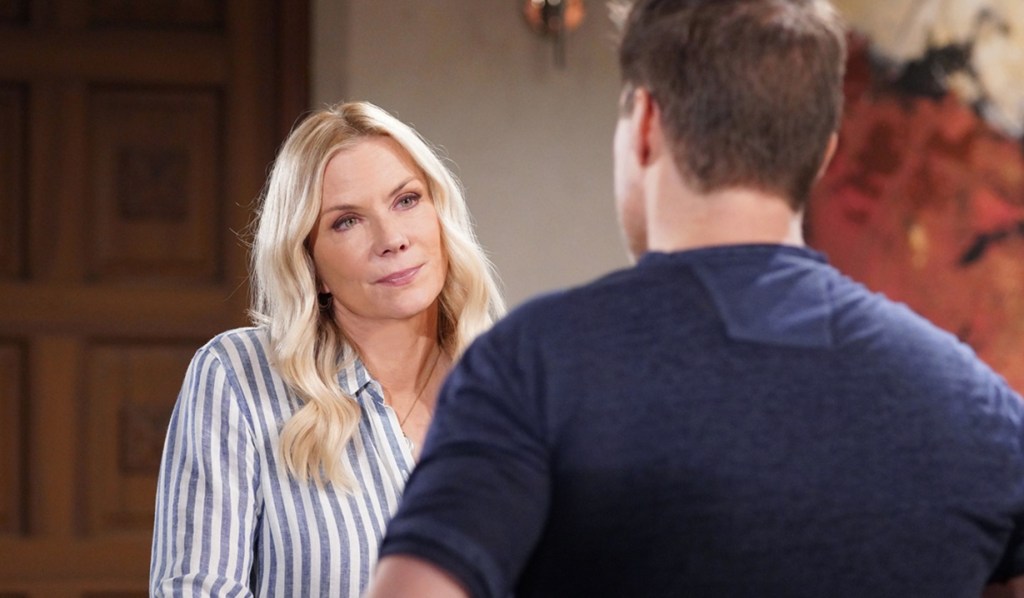 In the Forrester living room over Chinese takeout, Ridge gets Taylor laughing about Quinn’s bad cooking. She thanks him for telling Brooke they needed time alone. Ridge likes hanging out with her. They open their fortune cookies. Taylor’s says if she really wants to find herself, she should play hide and seek alone. Ridge’s says to find a best friend, be a best friend. Taylor tells him he’s her best friend. He thinks she gets him more than most people. Taylor knows he doesn’t want to hurt anyone. Ridge needs to take his time and it’s risky because she might pack her things and leave again. He doesn’t want that. His life is better with her in it. Taylor knows he loves her, and she’s not going anywhere. “I believe in us. I like us. A lot.” Ridge smiles.

At the health club in bed, Donna reminds Eric of all the wonderful times they’ve shared. She just wants him to be happy. “I’m not a homewrecker and I…” What she’s trying to say is, “Leave her, Eric. Leave Quinn.” Eric takes her face in his hands.

At Forrester Creations, Quinn tells Carter she owes Eric what he’s always given her. Loyalty and fidelity.

Next on The Bold and the Beautiful: Eric manages his entanglement with Donna and Brooke surprises Ridge with a late night visit.

Oh, honey! Don’t miss this look back at Eric and Donna’s sweet — and often scary! — love story in the photo gallery below. 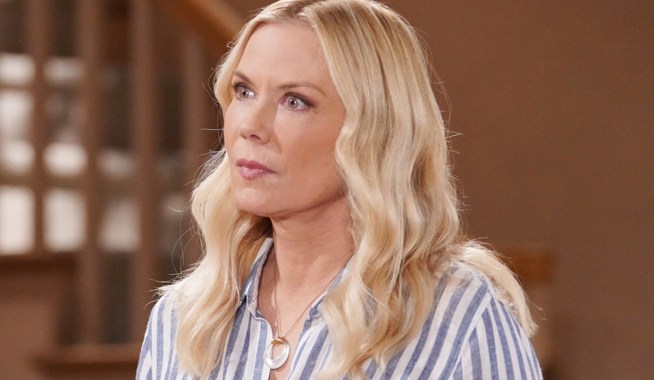 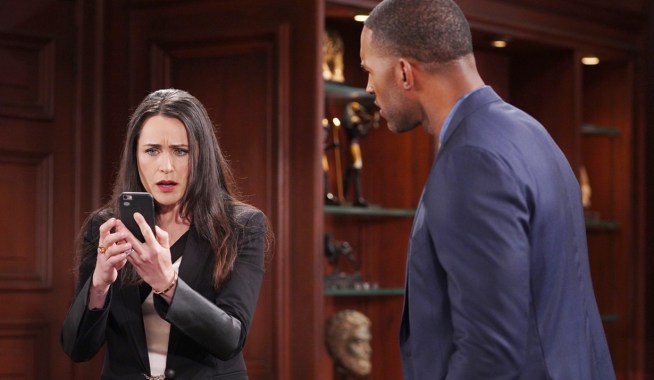