Monday, April 25, 2022: Today on The Bold and the Beautiful, Sheila gets the boot, Quinn shares her concerns with Carter, and Hope insists Liam tell Steffy the truth. 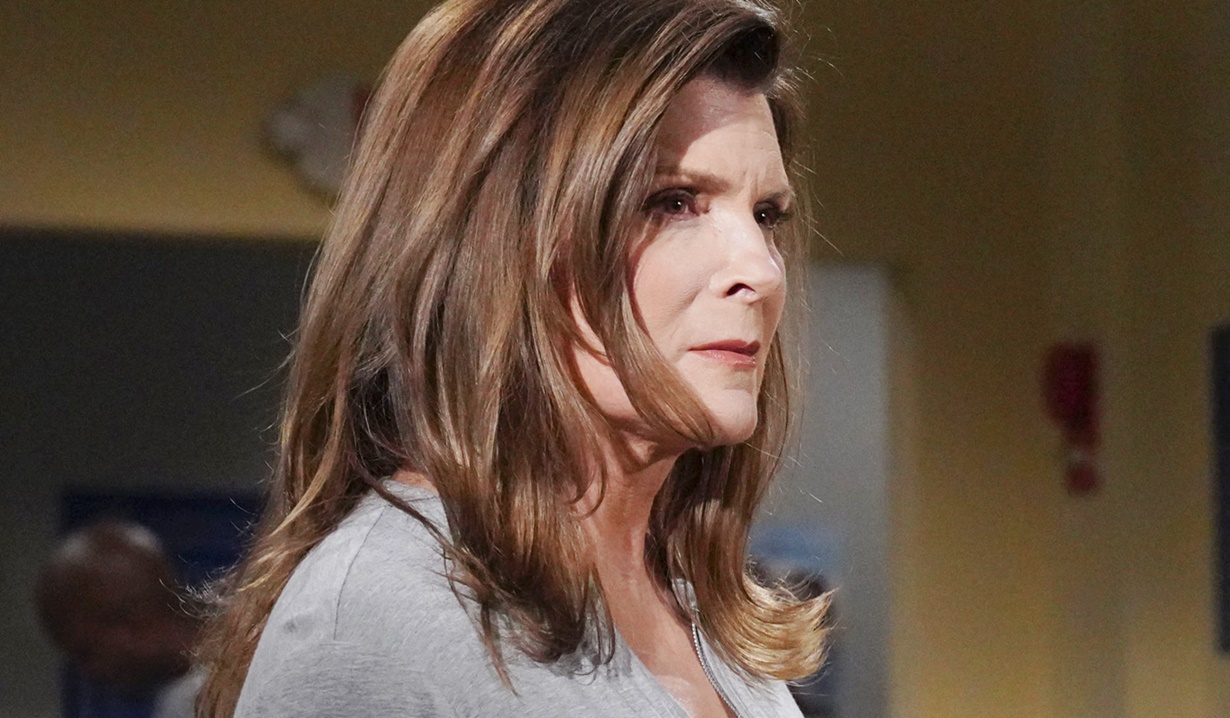 In Steffy’s hospital room, Baker tells her they’re hoping she can remember a little more about when she was shot. Sheila enters as Steffy is asked, “Do you remember who shot you?” After flashing to a door in the alley, the patient says, “I’m starting to remember.”

In the waiting area, Liam, Hope, Brooke and Taylor discuss the prospect of Steffy remembering the shooter. Taylor vows they’ll find whoever did this and hold them accountable, but warns she hasn’t yet been able to recall much of anything. Brooke adds, “Including who her husband is… and isn’t.” 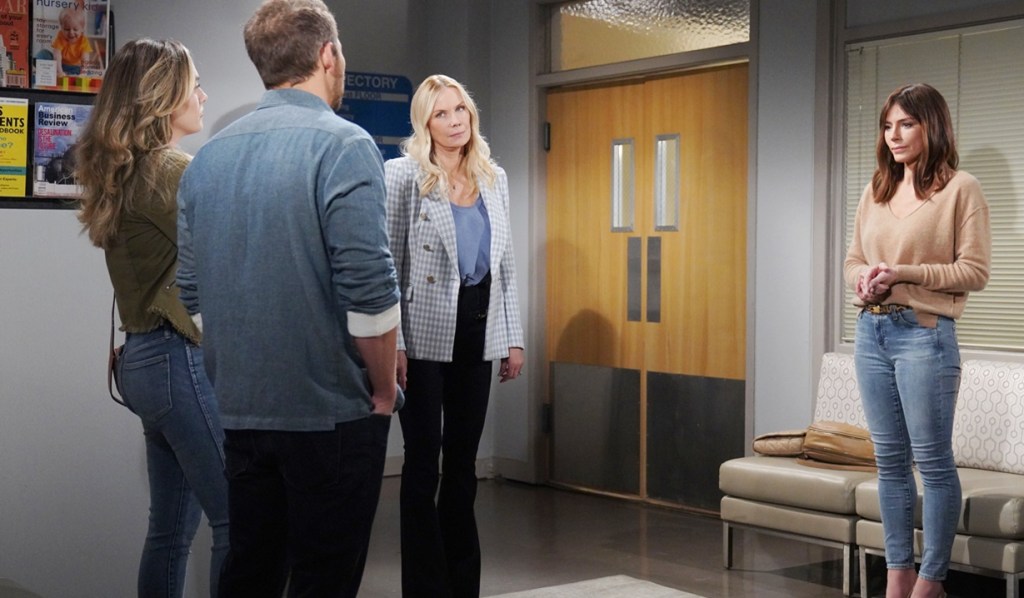 In the Forrester office, Eric updates Quinn on Steffy’s condition and ruminates about her being gunned down like an animal and Finn killed. Quinn can understand why he’s been so distant lately — he has a lot on his mind. Carter walks in and Eric figures he’s probably surprised to see him there. Carter assures Eric that Steffy has a lot of people rooting for her. They all miss her around the office. Eric is a proud, hopeful grandfather. He knows she’ll recover physically, but he’s worried about her emotionally. Quinn and Carter assure that everyone will continue to pray for Steffy. Eric has an appointment to go to and peck’s Quinn’s cheek as he leaves. 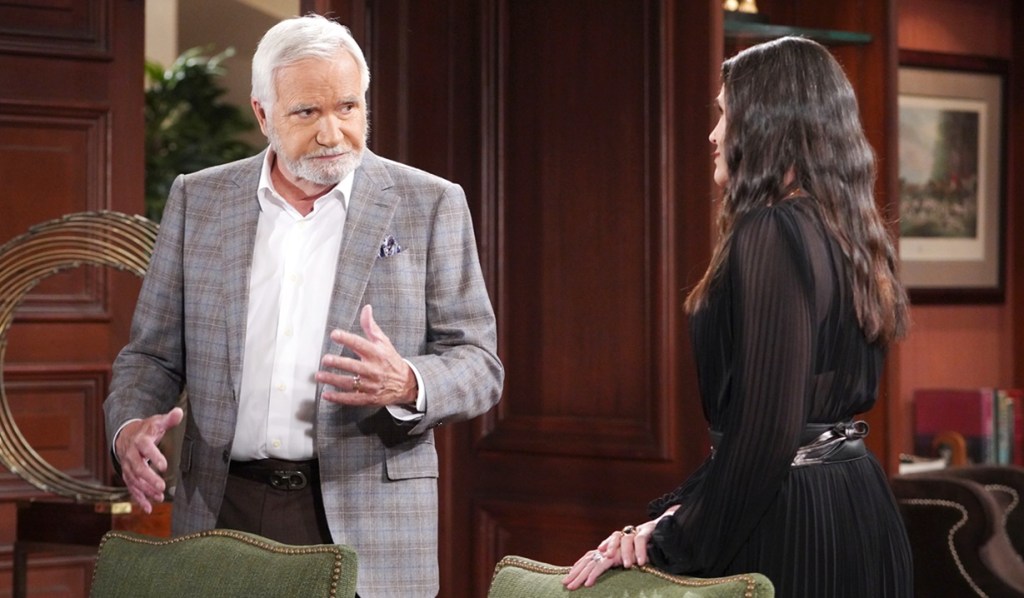 Quinn tells Carter that Eric is being affected by what’s happened to Steffy more than he’s letting on. Carter asks, “Quinn, what’s going on?” Quinn thinks she and Eric have found some solid ground, but she might be kidding herself — her marriage may never be the same after her affair with him. Carter assures her that Eric loves her. Quinn worries he might not be able to love her, or trust her, the way that he used to. 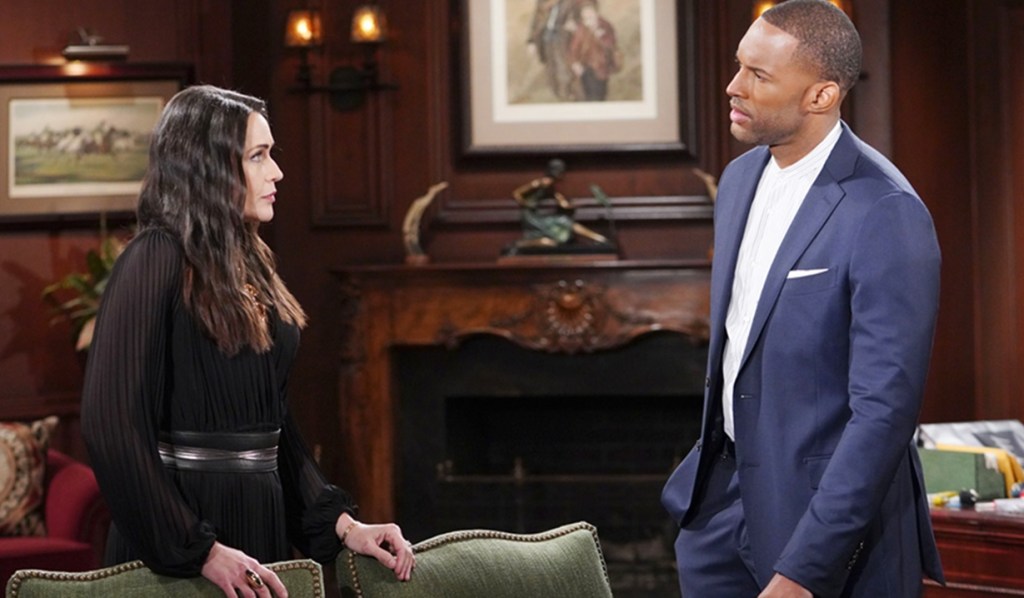 In the hospital waiting area, Taylor reminds Hope and Brooke that Steffy is in a very fragile state. Brooke questions if it’s wise to let her think Finn never existed. Taylor argues they can’t force her to conjure up painful memories it could have dangerous long-term consequences! Hope says they understand, but at one point does it become a detriment to Steffy’s recovery and to her children… to Hayes? Brooke interjects, “How long are you going to keep hiding the truth from your daughter?” Taylor retorts, “As long as it takes for her to remember everything safely.” Liam tries to smooth things over. He’s hoping she’ll be able to identify who shot her and Finn.

In Steffy’s hospital room, Ridge asks if she can remember anything. Steffy, looking perplexed, asks, “Why? Why do I see… Sheila?” Baker and Ridge turn to look at her by the door. Steffy doesn’t want Sheila there. Ridge tells her to go. Sheila says, “Of course,” she doesn’t want to upset her. She tells Steffy she’s sorry — more than she’ll ever know. After Sheila exits, Steffy asks her father what she’d doing back in their lives. Ridge wants to focus on her recall. Steffy can’t remember anything. Baker tells Ridge he’ll come back later and try again. 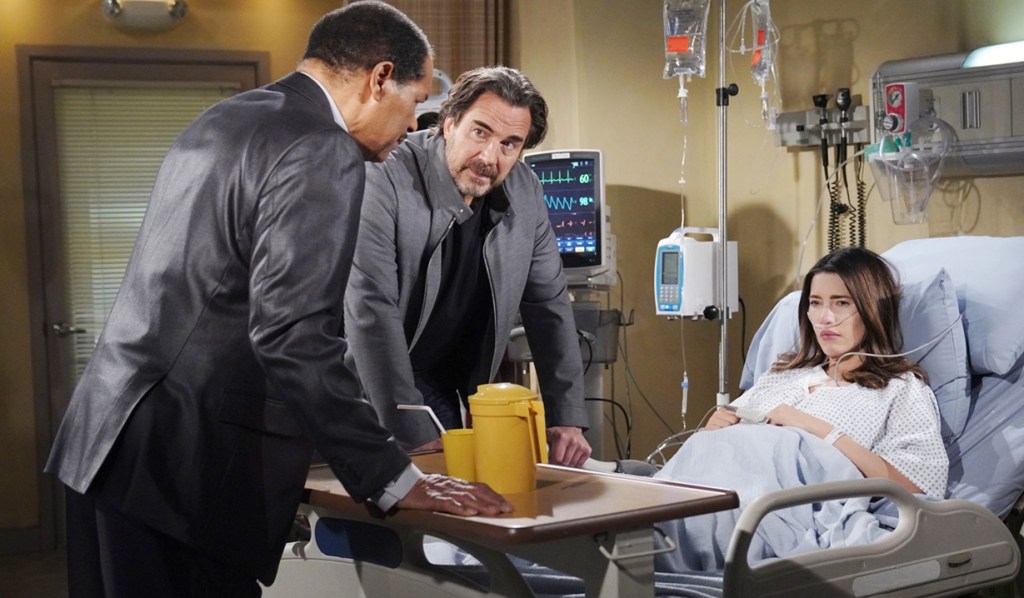 In the hallway, Baker tells Sheila he’d like to speak with her for a moment.

In the waiting area, Brooke tells Hope, standing with Liam, that Steffy can’t go on thinking Liam is her husband! She understands they have to be careful and sensitive, but the situation isn’t sustainable. Steffy needs to know the facts about Finn and Hayes. She needs to be told — how long are they expected to play along?! Hope believes that Steffy would want to know, and she thinks Liam knows that as well. If anyone is going to tell her, it should be Liam. “You need to tell her you’re not her husband.” 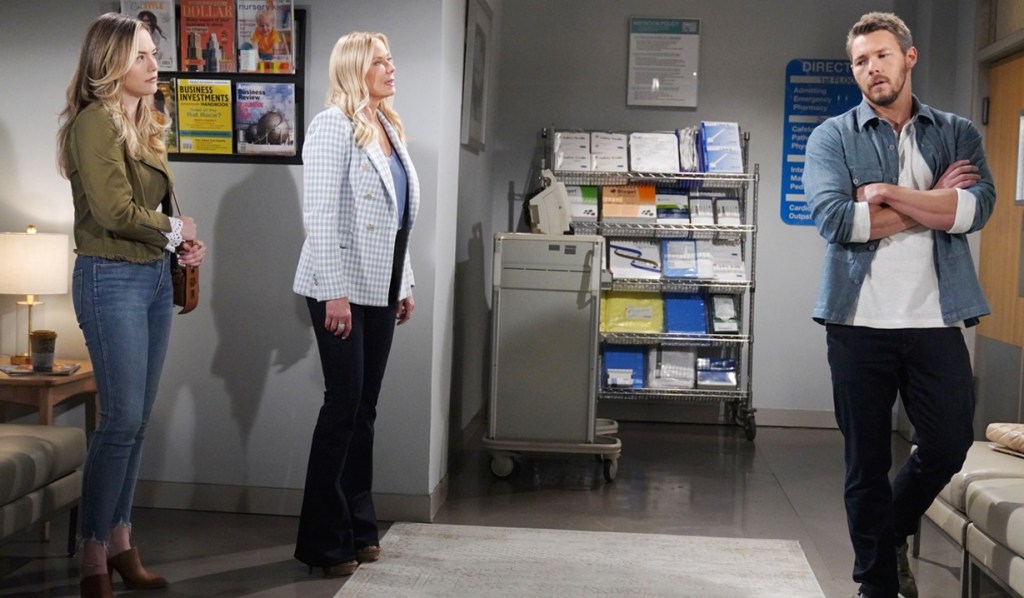 In the hall, Baker tells Sheila he finds it remarkable that the Forresters have let Sheila anywhere near them. She reminds him her son died — she is Finn’s mother. She declares that Finn was not supposed to be there. He’d still be alive otherwise. Baker asks her if she can think of anyone who would shoot her son and Steffy Forrester. 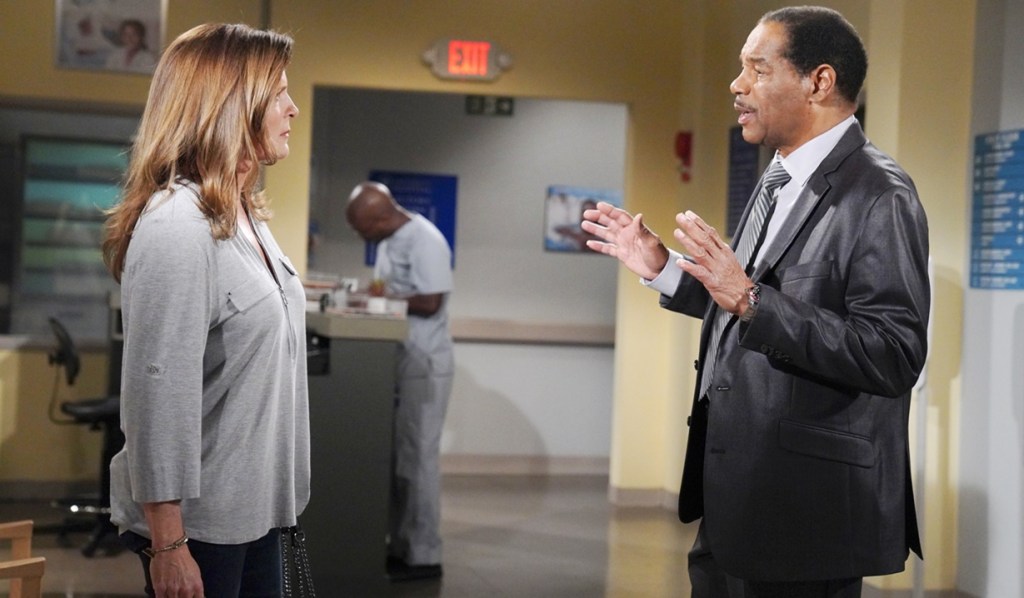 In her room, Steffy tells Ridge she can only see shadows — it’s all so hazy. Taylor comes in and learns that Baker was back, and Steffy could only see fuzzy images. She’s not sure if it’s real or is she creating a memory from what they’ve told her. Steffy wants to catch this person so they don’t hurt anyone else. Taylor assures her she’ll remember when she’s ready. Ridge adds that when she does, they’ll put that person away forever. Steffy just wants to get home — back to Kelly and Liam. They’re the reason she keeps fighting. Taylor and Ridge exit.

Outside the room, Ridge is concerned about Steffy and asks Taylor how long it will take. She urges him to be patient. They go to get coffee. Sheila watches them walk away before approaching Steffy’s room. She looks in, sees Steffy asleep, and walks inside. Walking over the bed, Sheila looks at the machines monitoring Steffy’s vitals, and at her IV bag. She flashes to Steffy hollering at her in the alley behind Il Giardino and squeezes her eyes shut. When she opens them, she looks at the IV bag again and runs her hand up the line. The screen goes black.

Next on The Bold and the Beautiful: Sheila decides to finish the job she started, and Liam breaks the news of Finn’s fate to Steffy.

Don’t miss our fun look back at soaps’ best location shoots in the photo gallery below. 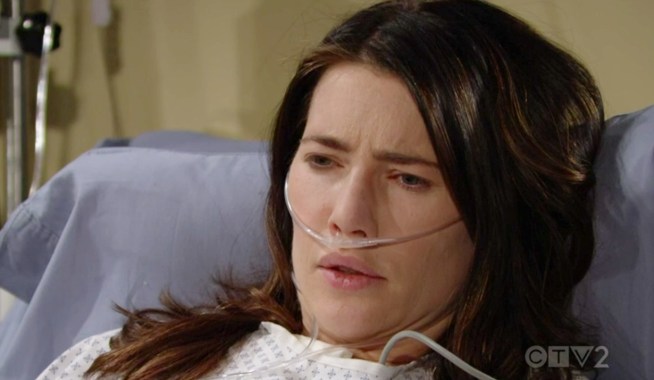 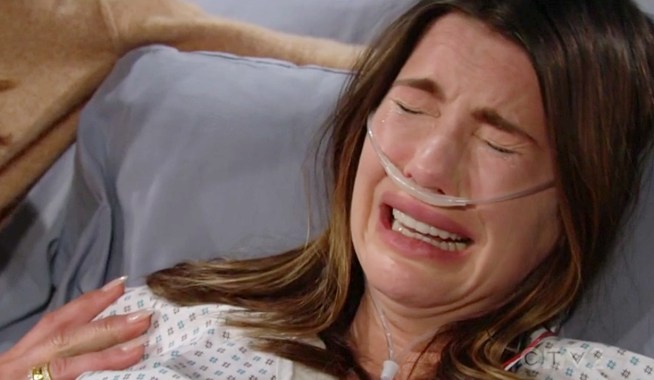